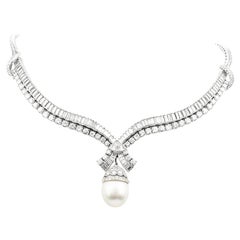 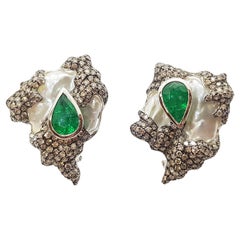 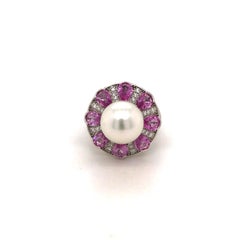 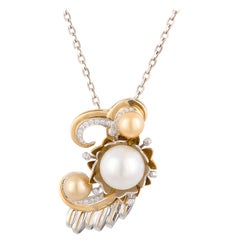 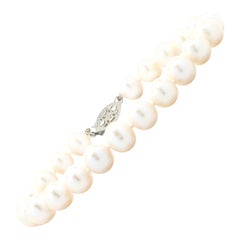 Free Shipping
Unique Freshwater Baroque Pearl Set on 18 Karat Gold Chain by Marion Jeantet
By Marion Jeantet
Located in Paris, FR
Beautiful and unique freshwater baroque pearl in the shape of a cloud or a heart depending on the side of the necklace, set on an 18 carat white gold chain. Chain : 18k White Gold ...
Category

Free Shipping
Abalone Pearl and 25.21 Carat Total Aquamarine Pear Dangle Drop Earrings 'A'
By Sarosi By Timeless Gems
Located in Los Angeles, CA
These stunning earrings feature two natural abalone pearls, which are among the rarest pearls in the world. These pearls have beautiful luster and amazing color! They are prong set i...
Category

Free Shipping
Alex Soldier South Sea Pearl Diamond Gold Drop Earrings One of a Kind
By Alex Soldier
Located in New York, NY
The wave, as it twists and swirls in a mesmerizing vortex, sweeps up a treasure from the depths of the ocean – a beautiful pearl, as light as a drop of water. Alex Soldier’s Twist co...
Category

Free Shipping
Wood and Fresh Water Pearls Sautoir by Marion Jeantet
By Marion Jeantet
Located in Paris, FR
Wood and fresh water pearls sautoir. In the day time you can wear it in a relaxed fashion, at night with a cosmopolitan elegance. It looks good with all life styles. Created by Mario...
Category

Free Shipping
Alex Soldier South Sea Pearl Diamond Gold Cocktail Ring One of a Kind
By Alex Soldier
Located in New York, NY
The wave, as it twists and swirls in a mesmerizing vortex, sweeps up a treasure from the depths of the ocean – a beautiful pearl, as light as a drop of water. Alex Soldier’s Twist co...
Category

Marina J. Pearl and Hematite Necklace with Diamonds and 14 Karat Gold Clasp
By Marina J.
Located in Beverly Hills, CA
This stunning necklace is sure to take people's breath away this holiday season! The necklace is made with a ladder-like deign, consisting of small hematite beads and and small white...
Category

Free Shipping
White Diamond South Sea Pearl 18 Karat Gold Cufflinks Made in Italy
By Elisa Pozza by PETRONILLA
Located in Bussolengo, Verona
Refined and elegant pair of cufflinks made of 18Kt gold. Gold Australian pearls have a very beautiful silky color and are unmarked. Each piece is made of a Australian pearl of about ...
Category

The pearl has been synonymous with ladylike elegance since the Tudor period — learn what to look for when shopping for vintage and antique pearl jewelry as well as how to tell the origin of a pearl with our handy primer.

Every woman at some point in her life desires a simple strand of pearls. They are elegant, timeless, versatile — just ask Coco Chanel or Jacqueline Kennedy — and valuable. In 1917, Pierre Cartier famously traded a double-strand of natural pearls for a Fifth Avenue mansion, the Cartier brand’s flagship store ever since. And if you were born in the beginning of summer, pearl is the June birthstone.

It is possible to tell where a pearl originated from its appearance. Akoyas are usually round and white — the classic pearl, if you will. South Sea pearls are normally larger and vary in color; orangey yellow ones are not uncommon. Tahitian pearls are mostly black but can also be gray or brown, and between the Akoya and the South Sea varieties in size. Freshwater pearls, or Orientals, run the gamut in terms of color and size, but in shape, they tend to resemble Rice Krispies. Another important distinction is a round pearl versus a baroque pearl. A round pearl is self-explanatory, but there are two types of baroque pearls: symmetrical and asymmetrical. In general, the symmetrical variation commands a higher valuation. Within a strand of pearls, uniformity is prized — the more the individual pearls resemble one another, the more valuable the strand.

According to the Gemological Institute of America (GIA), the earliest recorded mention of a pearl was in 2206 BC by a Chinese historian. Centuries later, Christopher Columbus made it a point to visit pearl fisheries during his 15th-century exploration of the Caribbean. Since the late-19th century, the Japanese have been at the forefront of cultivating pearls, when jeweler Kokichi Mikimoto successfully cultured the world’s first pearl in 1893.

On 1stDibs, find vintage and antique pearl necklaces, pearl earrings and other accessories.