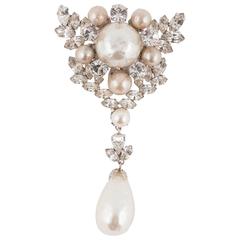 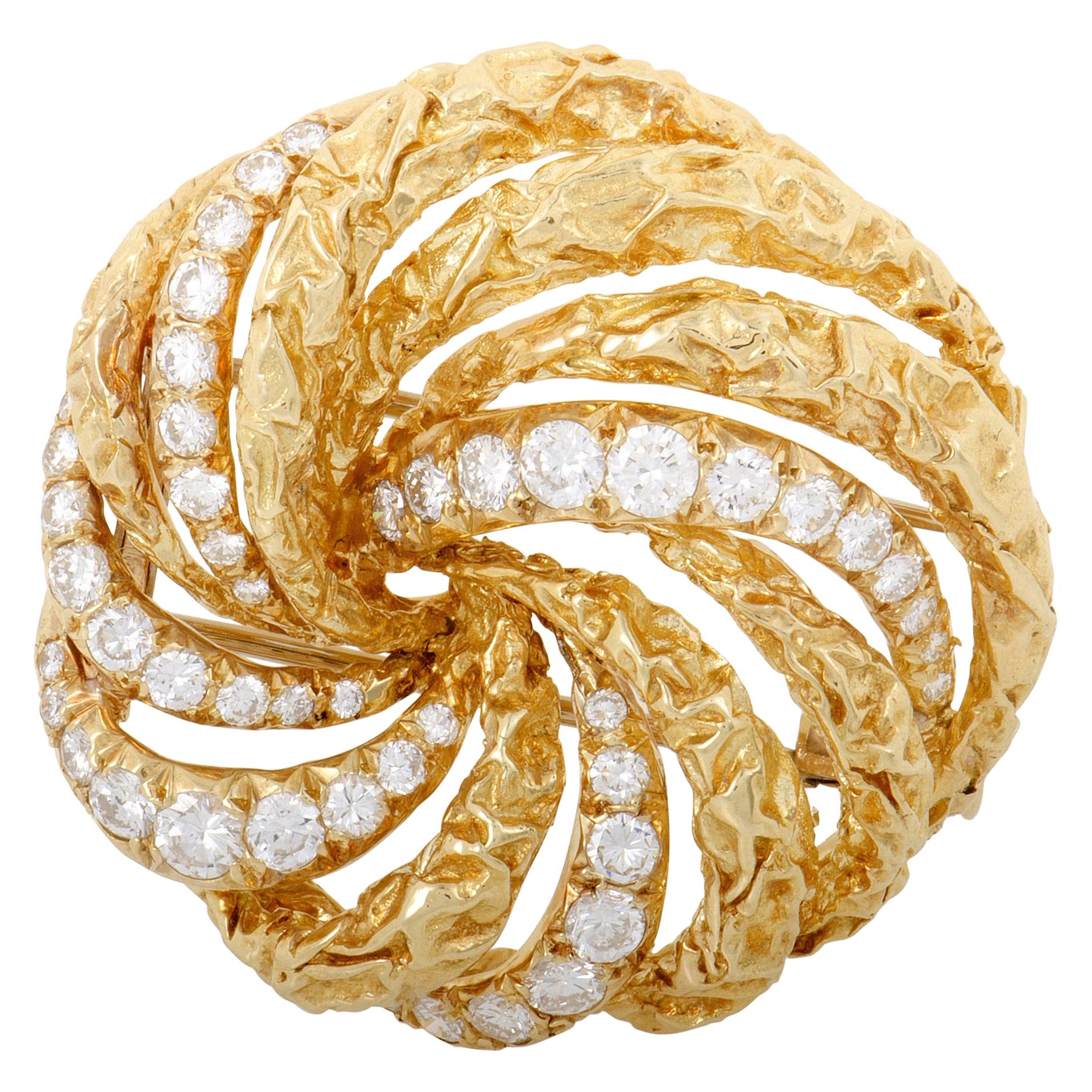 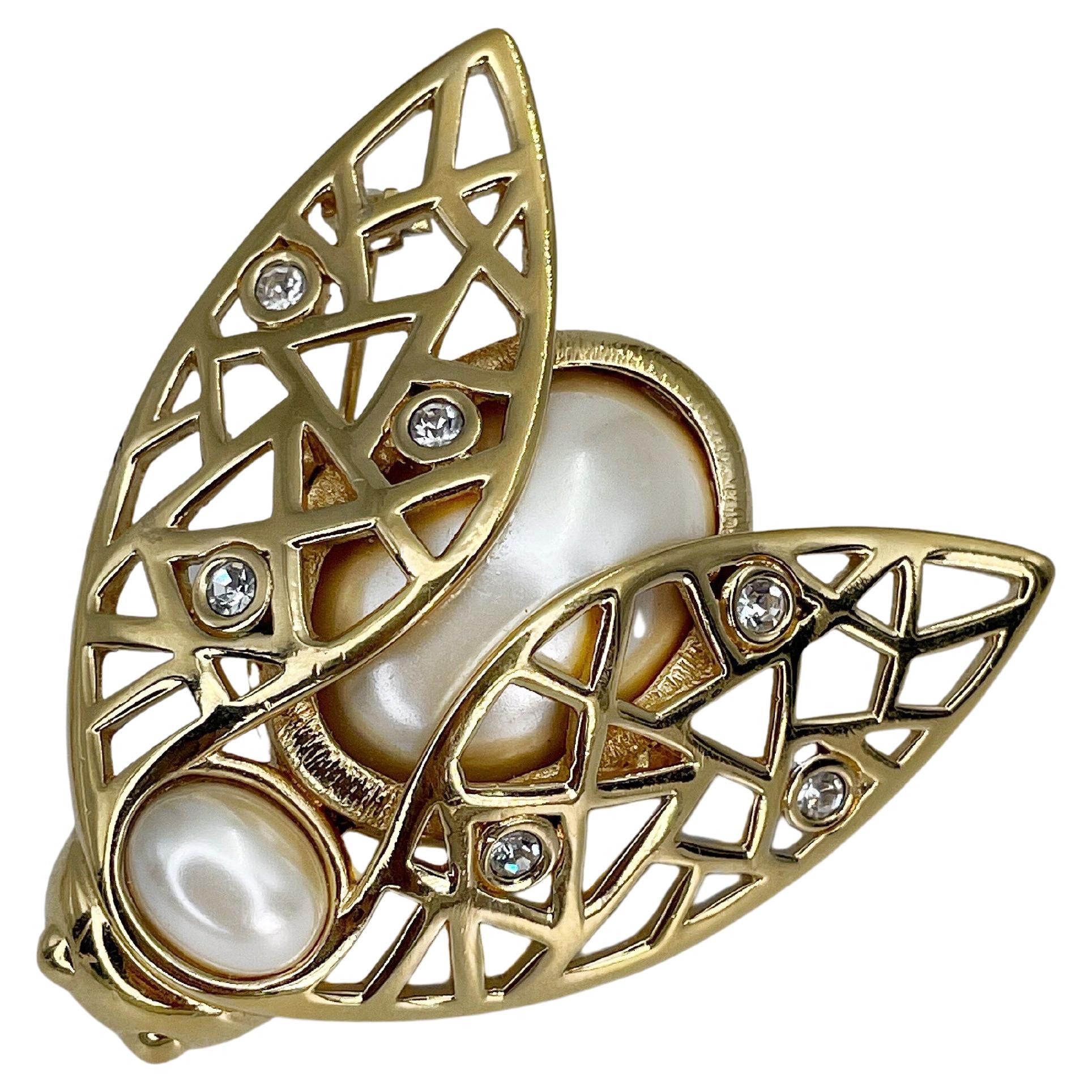 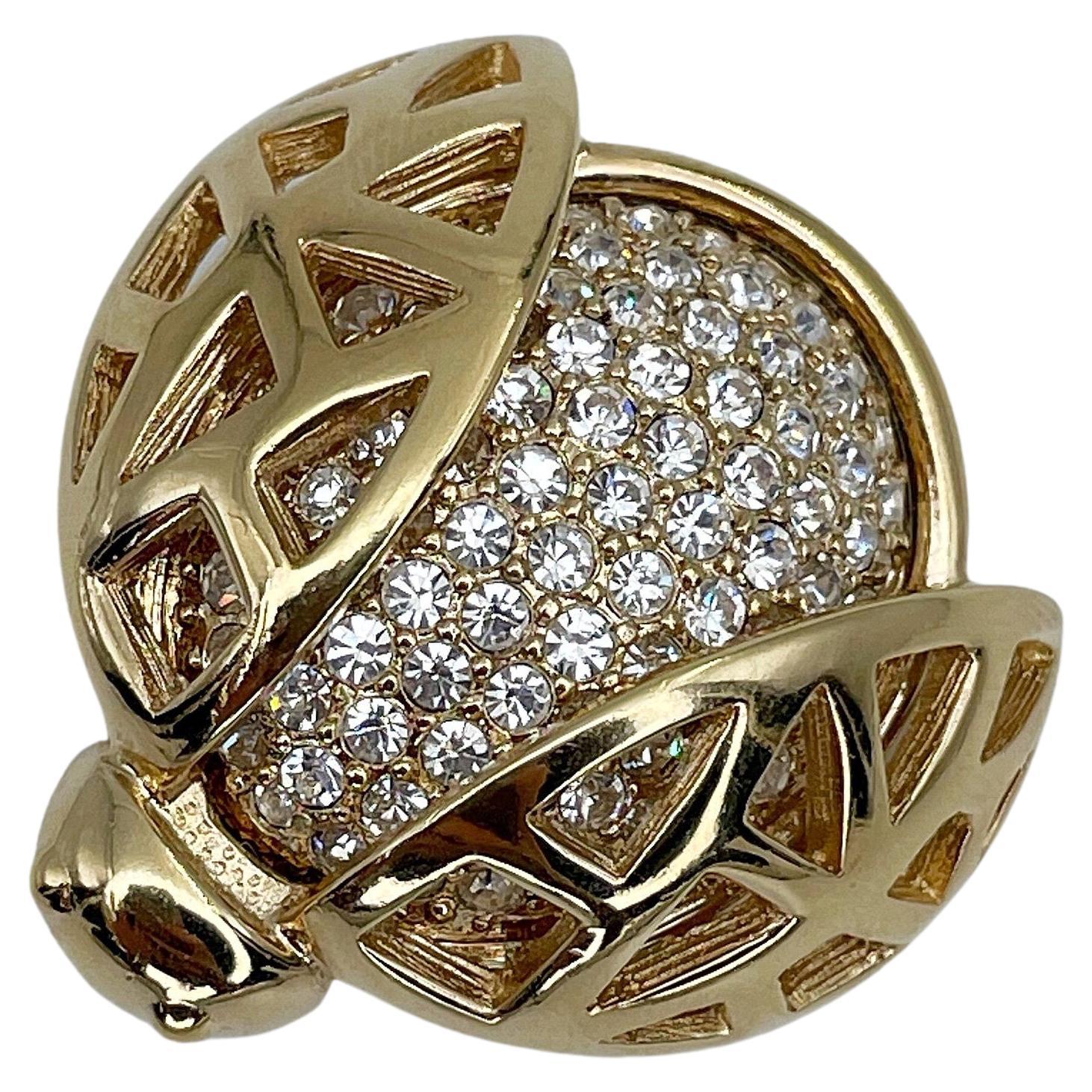 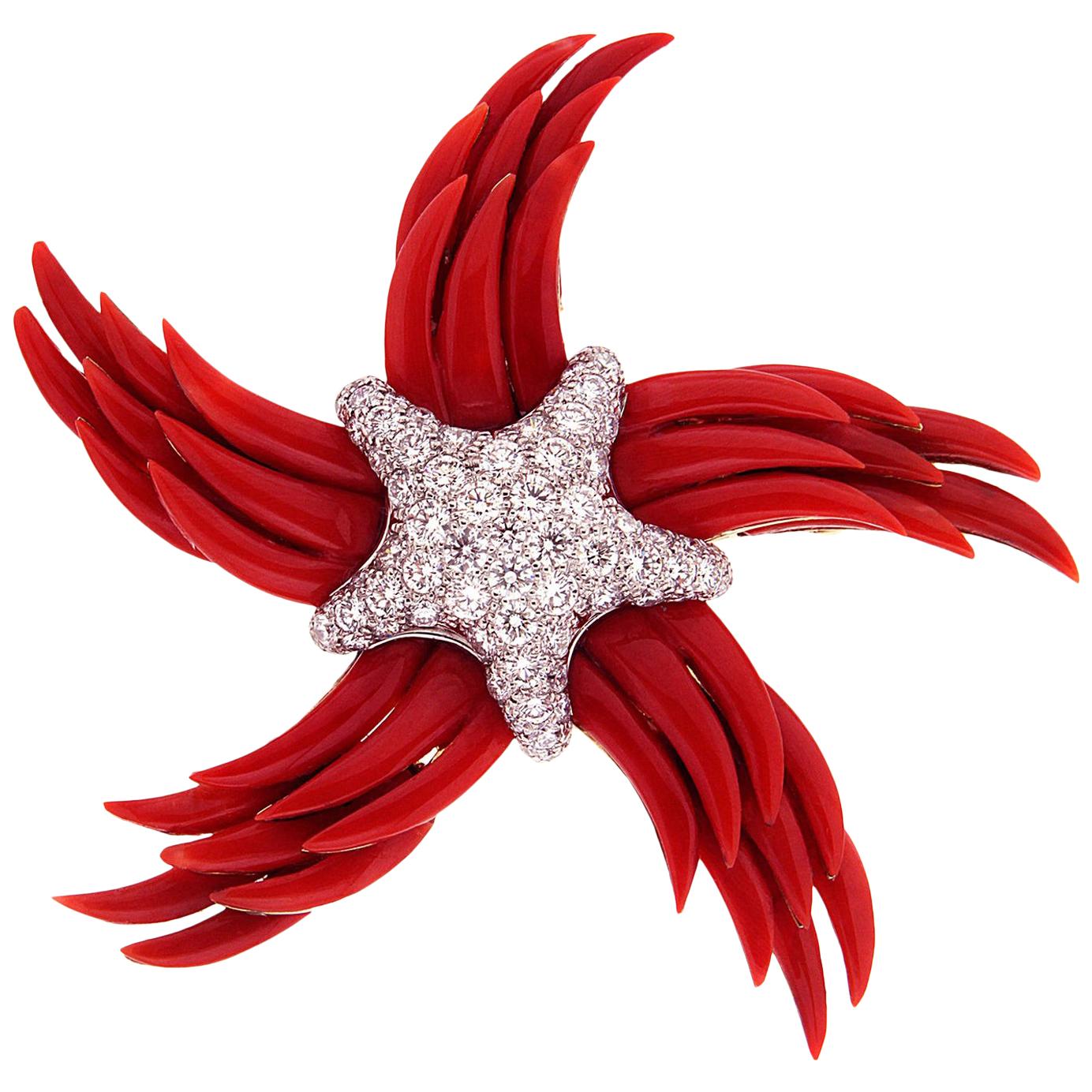 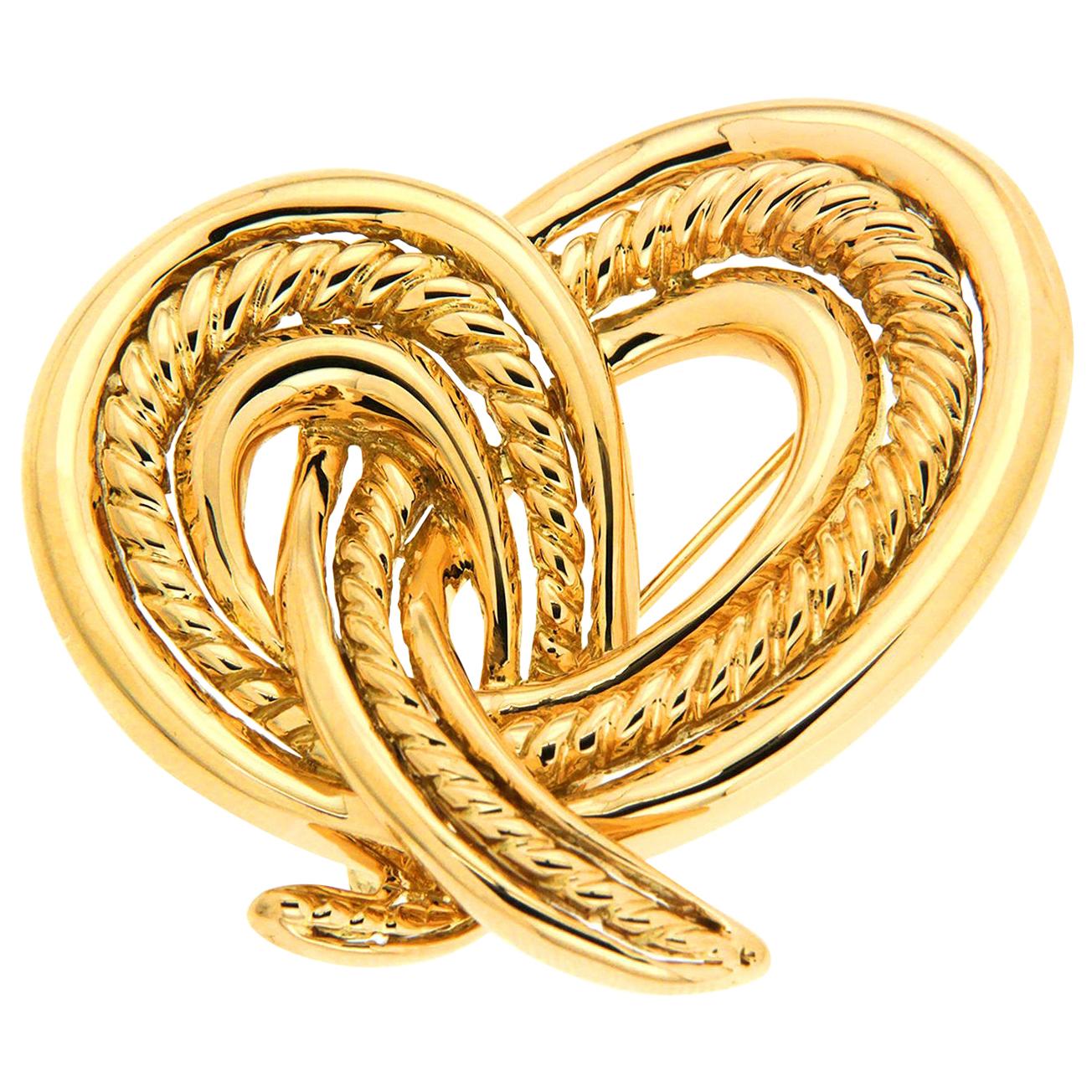 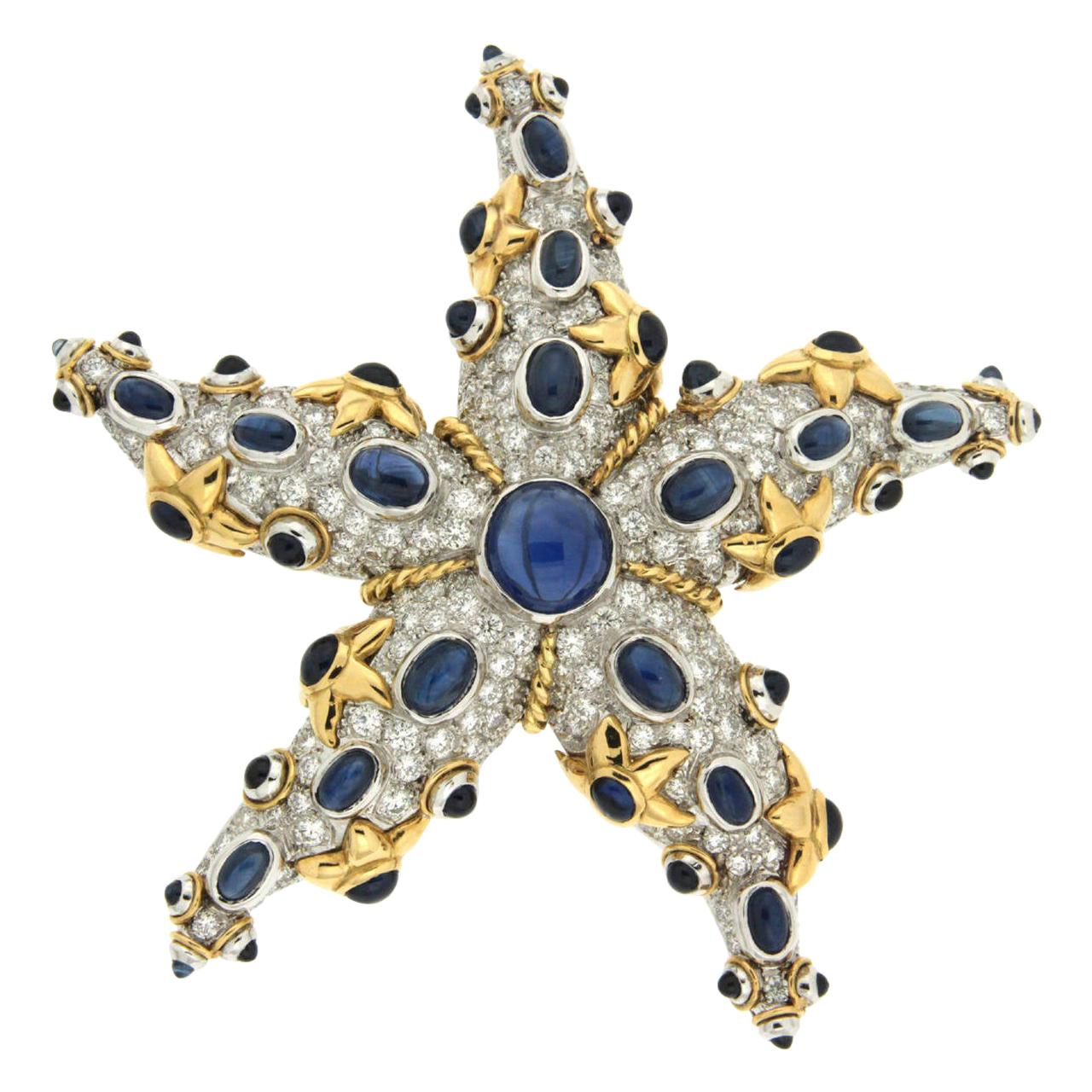 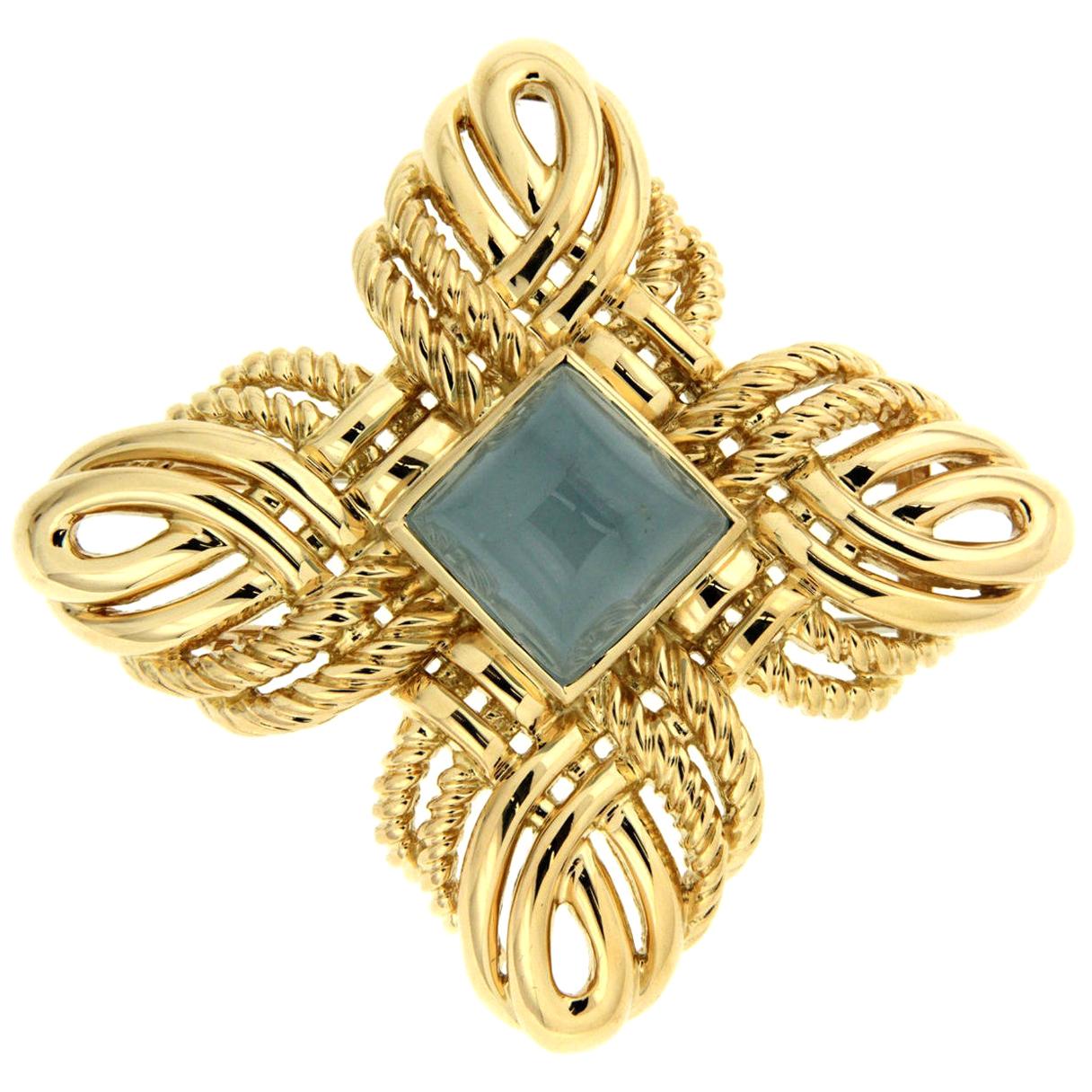 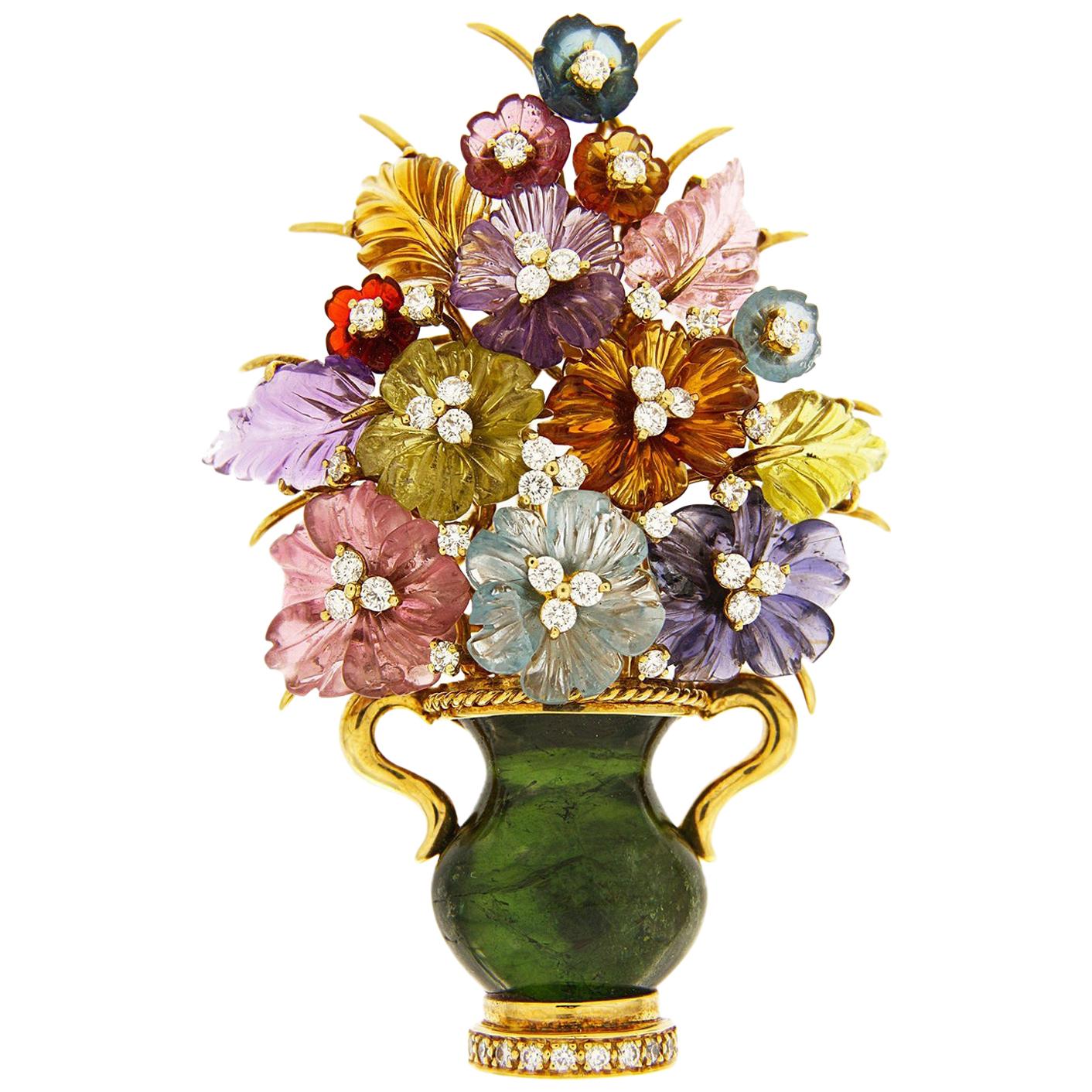 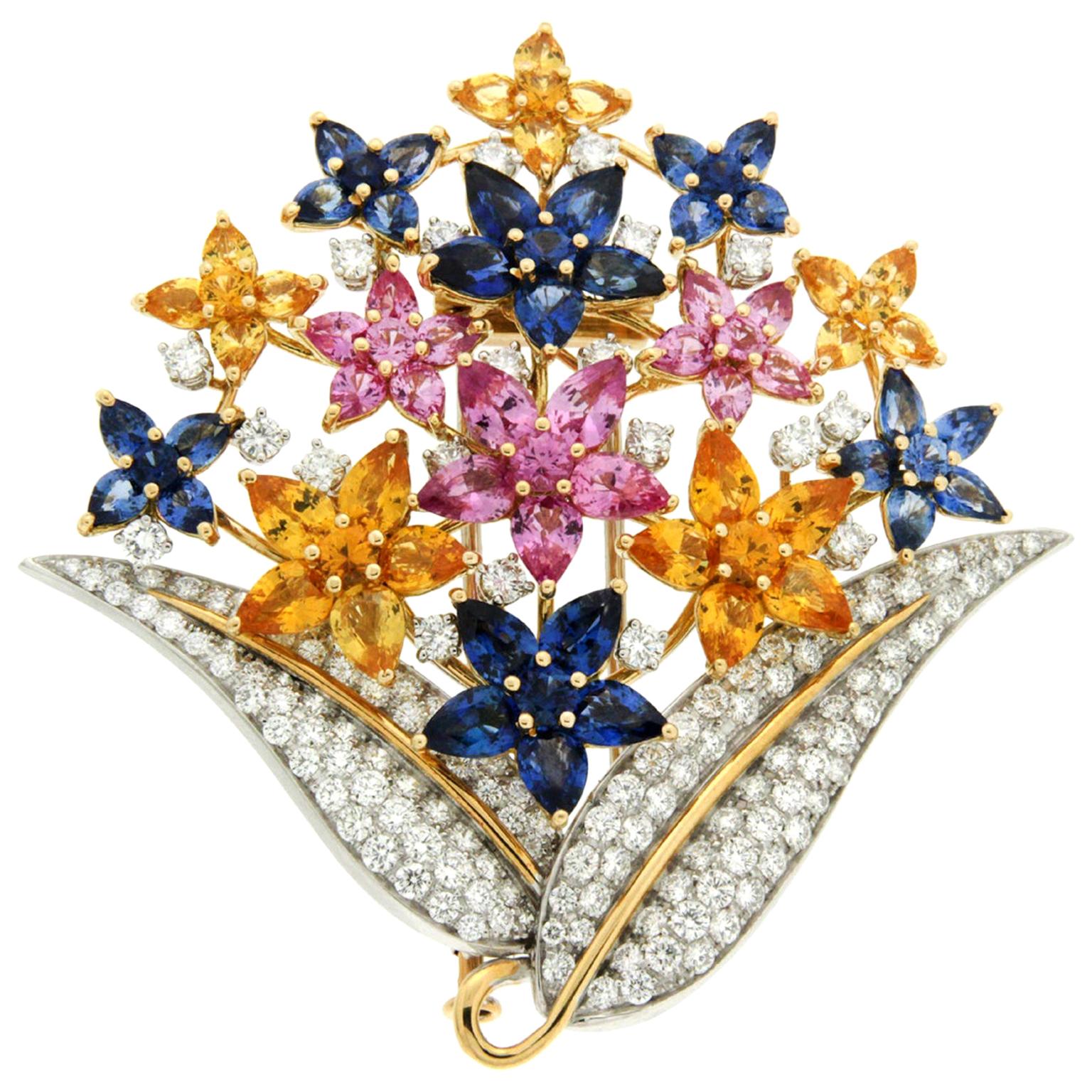 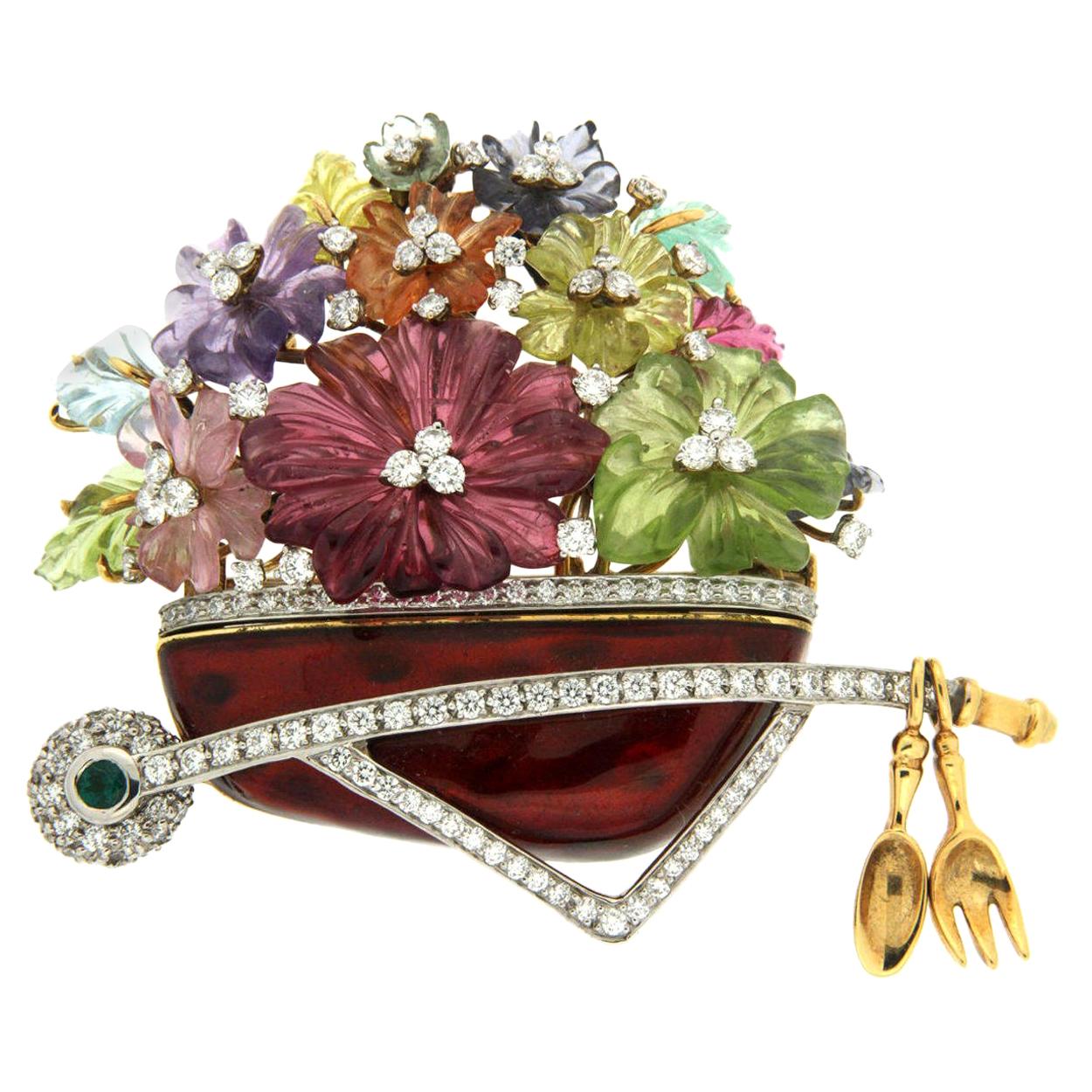 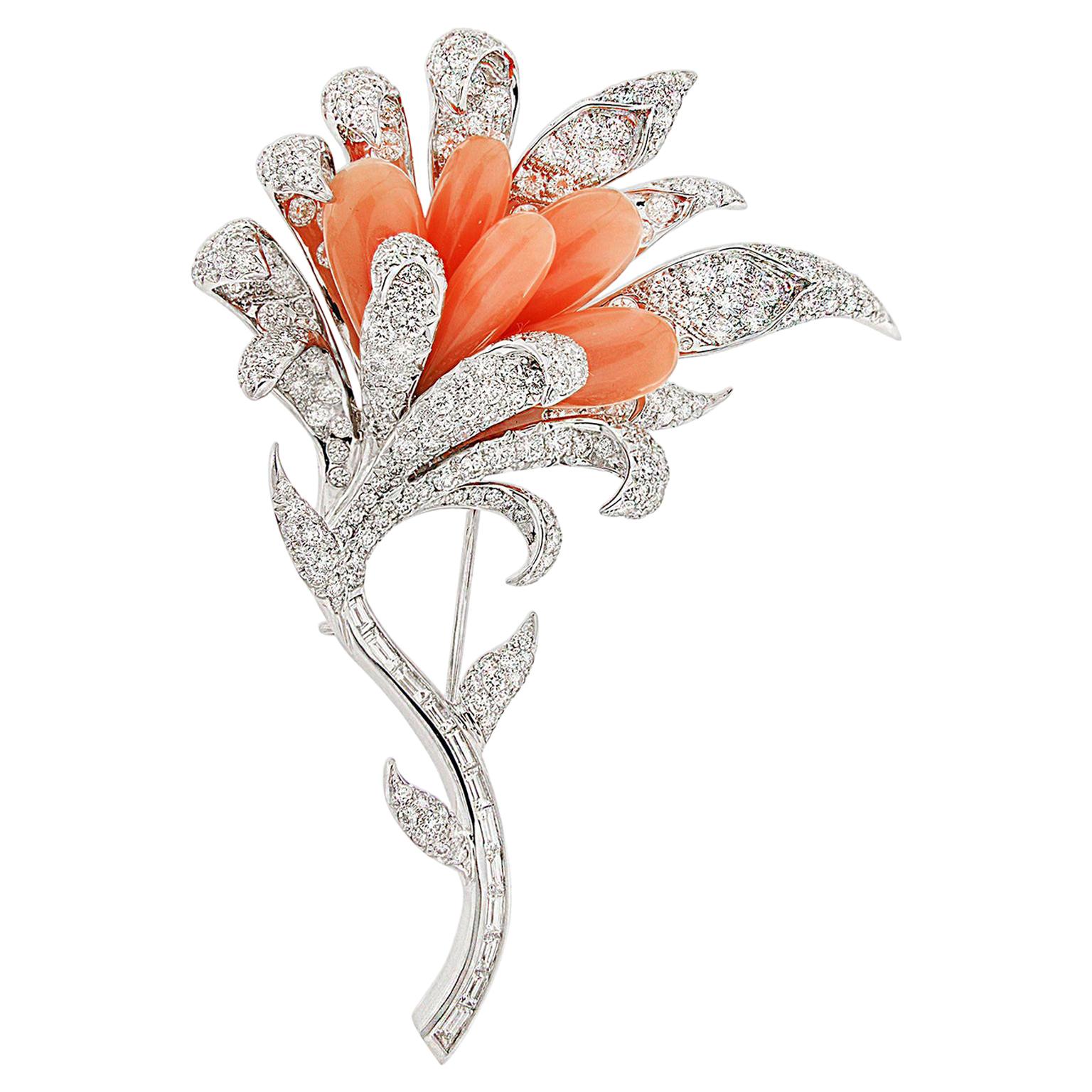 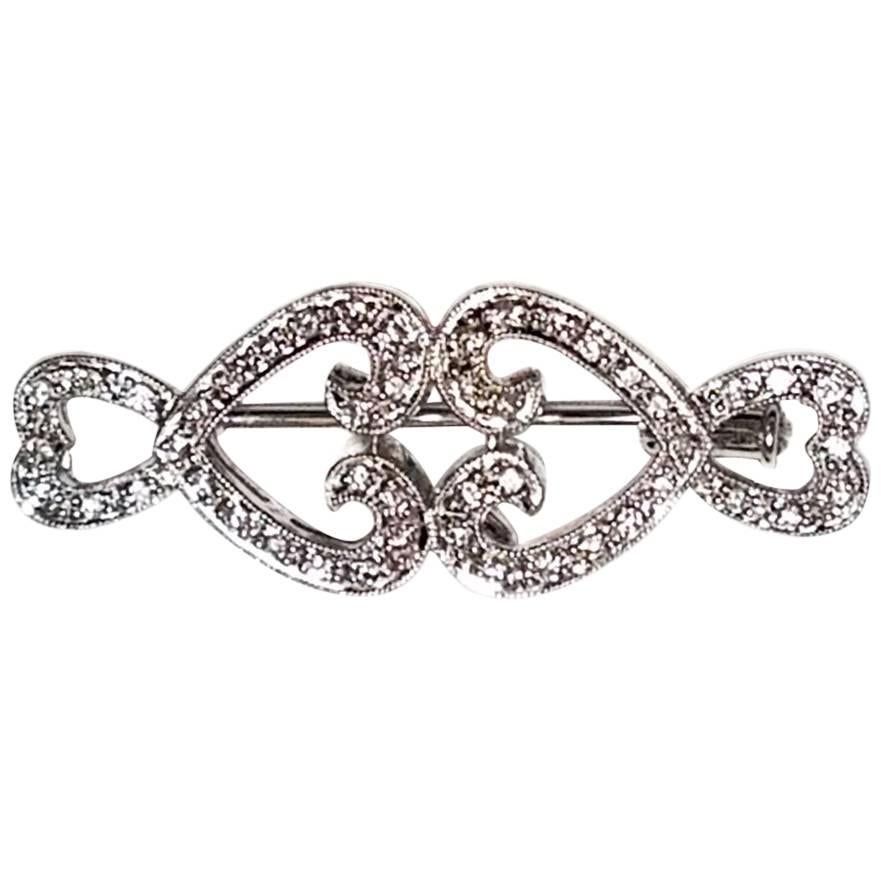 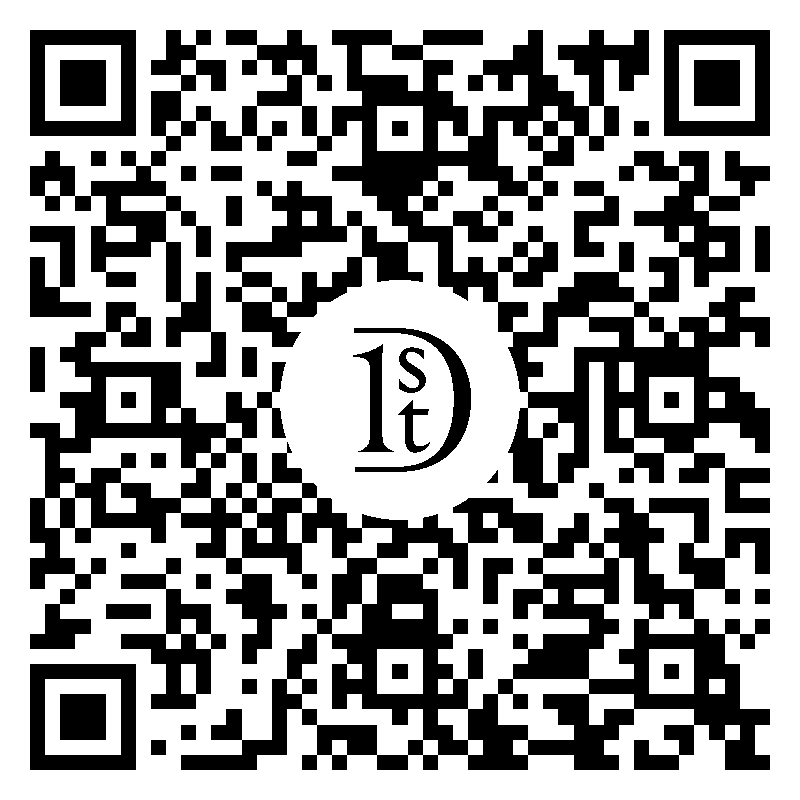 This is a pristine Dior brooch made in Germany by Henkel and Grosse in 1961. It has a wonderful leaf like paste frame for the hand set and dangling baroque pearls. It would be a brilliant starting point for a wedding dress. Equally it would look stunning pinned to the back of a low cut evening dress. Absolutely what costume jewellery is all about. Christian Dior was born into a wealthy family in 1905, being raised in the Normandy seaside town of Granville. Working first for Robert Piguet and then for Lucien Lelong as a head designer, during the war years, he then opened his own couture house. His now highly celebrated and iconic first collection ‘Corolle’ caused a sensation, and is now known by its more famous name ‘New Look’. From the very beginning in 1947, jewellery played a very prominent part in his collections, initially recalling the pomp and grandeur of the 18th century , its femininity and glamour, and later moving into extravagant experiments with Austrian stones and paste, throughout the late 1950s until the 1970s. 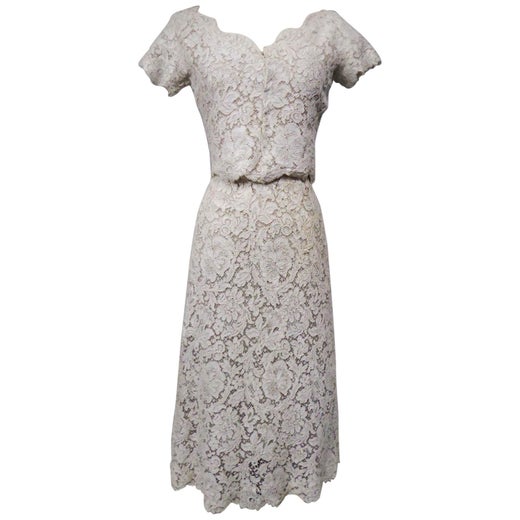 When Christian Dior launched his couture house, in 1946, he wanted nothing less than to make “an elegant woman more beautiful and a beautiful woman more elegant.” He succeeded, and in doing so the visionary designer altered the landscape of 20th century fashion. Dior was born in Granville, on the Normandy coast, in 1905. His prosperous haute bourgeois parents wanted him to become a diplomat despite his interest in art and architecture. However, they agreed to bankroll an art gallery, which Dior opened in 1928 in Paris with a friend.This was the start of Dior’s rise in the city’s creative milieu, where he befriended Pablo Picasso and Jean Cocteau. After seven years as an art dealer, Dior retrained as a fashion illustrator, eventually landing a job as a fashion designer for Robert Piguet, and in 1941, following a year of military service, he joined the house of Lucien Lelong. Just five years later, with the backing of industrialist Marcel Boussac, the ascendant Dior established his own fashion house, at 30 avenue Montaigne in Paris. Just two years after the end of World War II, the fashion crowd and the moribund haute couture industry were yearning, comme tout Paris, for security and prosperity, desperate to discard the drab, sexless, utilitarian garb imposed by wartime deprivation. They needed to dream anew.And Dior delivered: He designed a collection for a bright, optimistic future. “It’s quite a revolution, dear Christian!” exclaimed Carmel Snow, the prescient American editor-in-chief of Harper’s Bazaar, famously proclaiming, “Your dresses have such a new look.” The press ran with the description, christening Dior’s debut Spring/Summer haute couture collection the New Look. “God help those who bought before they saw Dior,” said Snow. “This changes everything.”Dior’s collection definitively declared that opulence, luxury and femininity were in. His skirts could have 40-meter-circumference hems, and outfits could weigh up to 60 pounds. They were cut and shaped like architecture, on strong foundations that molded women and “freed them from nature,” Dior said. Rather than rationing, his ladies wanted reams of fabric and 19-inch waists enforced by wire corsets, and the fashion world concurred. The debut got a standing ovation.In the subsequent decade, Paris ruled as the undisputed fashion capital of the world, and Christian Dior reigned as its king. With the luxuriously full skirts of his New Look, suits and his drop-dead gorgeous evening dresses and ball gowns worthy of any princess, Dior gave women the gift of glamour they’d lost in the miserable years of war.On 1stDibs, find an exquisite range of vintage Christian Dior clothing, jewelry, handbags and other items.
About the Seller
5 / 5
Located in London, United Kingdom
Vetted Seller
These experienced sellers undergo a comprehensive evaluation by our team of in-house experts.
Established in 1988
1stDibs seller since 2015
183 sales on 1stDibs
Typical response time: 9 hours

US$415
Free Shipping
Large stylised silver gilt and paste 'swan' brooch, Trifari, USA, 1940s
By Alfred Philippe for Trifari
Located in London, London
Exquisitely sculpted, of the highest quality as is expected from Trifari is the magnificent 'swan' brooch, designed by the most famous of Trifari designers, Alfred Philippe, in the 1...
Category

US$415
Free Shipping
A large vibrant green paste 'lava' stone brooch, Elsa Schiaparelli, USA, c1954.
By Elsa Schiaparelli
Located in London, London
A most striking and vibrant brooch from the House of Schiaparelli in the early 1950s. Her jewellery from this time was famous for its use of very unusual coloured textured stones, in...
Category

US$1,260
Free Shipping
Large gilt metal and paste 'frog' brooch, Ciner, USA, 1980s
By Ciner NY
Located in London, London
A charming gilt metal and clear paste 'frog' or 'toad' brooch, made by Ciner, the quality as expected from this well known designer. The surface has gilt 'bobbles' interspersed among...
Category

US$7,500
Free Shipping
Vintage Christian Dior Gold Tone Pearl Crystal Insect Pin Brooch
By Christian Dior
Located in Vilnius, LT
This is a stunning gold tone pin brooch by Christian Dior. The piece is depicting a lovely bee. It is gold plated, embellished with clear crystals and faux pearls. It is made in 198...
Category

US$564
Free Shipping
Vintage Christian Dior Gold Tone Ladybug Rhinestone Pin Brooch
By Christian Dior
Located in Vilnius, LT
This is a lovely gold tone round ladybug brooch designed by Christian Dior. The piece is gold plated, adorned with clear rhinestones. It is made in 1970’s-1980’s. Brooch is highly co...
Category

Too Soon for the Return of ’90s Fashion? As If

14 Iconic Luxury Handbags and the Stories behind Them

When the name of a bag is as well-known as its brand, you know it's a classic.