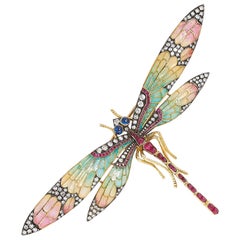 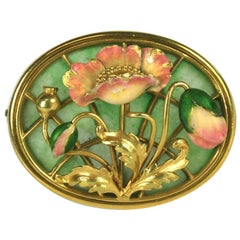 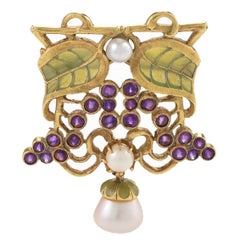 "L'Anémone des Bois", A French Art Nouveau masterwork by René Lalique. Created in 1897, this 18 karat gold brooch showcases Lalique's mastery of "plique-à-jour" enamel and also represents one of his earliest explorations of the art of molded glass. The brooch is accented by two oval faceted aquamarines weighing approximately 8.10 and 3.75 carats. More than any technical mastery or gemological import, the brooch is distinguished by its aesthetics and its deep meaning. This exquisite "Anémones des Bois" Brooch is an important example of René Lalique's early work, predating his international debut at the Exposition Universelle of 1900. While his most prolific version of the anemone motif was the "Anémone couronnée" or poppy anemone, only a few choice pieces depict the "Anémone des Bois" or wood anemone. Unlike the poppy anemone, which grew in the balmy Mediterranean summer, the Anémone des Bois was known to the French as the harbinger of spring. While the forest floor lay dormant, the wood anemone alone reared its small head. Areas where the poor could pick this humble flower were demarcated with signs reading "Les Halles." The Anémone des Bois lined the border of the forest, enticing promenading couples into the forest's embrace for an afternoon tryst. Pure white anemones thus became a symbol of virginal purity, mourning its imminent profanity by carnal desire. Lalique knew these traditions well from spending his childhood and summer holidays in the commune of Aÿ in Marne, located on a plateau overlooking the hillsides of Champagne. Two forests dominated the Marne landscape. To the west lay the old-growth forest of Sermiers, and to the east lay La forêt domaniale du Chêne à la Vierge. Promenading in the forest was a popular Sunday pastime for locals, especially as a way to escape the unrelenting dry heat of the noonday sun. Lalique expanded upon the theme of carnal desire, using the anemone to allegorize the stages of courtship. Our Anémone des Bois marked the beginning of this five-year-long exploration. With its petals slightly closed, the flower embodies the initial "rejet" or rejection of love. Fitting of a depiction of "rejet" the work epitomizes divine symmetry and youthful vigor. The flower's posture relates to local wisdom: villagers could tell rain was coming when the Anémone des Bois closed its petals. By closing its petals, the flower rebuffs the words and sexual advances of the man. The second anemone in the series has its petals in disarray but receptive to potential pollination. An anemone in this position embodied "l'acceptation de l'amour" or the acceptance of love. The third anemone is the most sensual of the series, two anemones approach a passionate kiss, embodying the "consommation" or consummation. The final anemone in the series was completed in 1901. Titled "Mort de l'anémone" it is Lalique's only representation of the blue anemone. Through the consummation, its petals have been dyed and its purity defiled. In macabre detail, the skeletal structure of the anemone's rhizomes, or underground stems, are put on full view. The plant has been uprooted, and the encounter has finished. Contemporary novelist Émile Pouvillon related the death of the anemone to the act of deflowering in his 1895 short story "Les Anémones sont Mortes." The story's heroine, a young country girl, loses herself in a bout of unrestrained euphoria with her lover. In their rolling about, "Anémones des Bois" are ripped out and bruised. At the 1898 Salon, the first Anémone des Bois was a critical triumph. Displayed with the second and third anemone in the series, the first was favored for its fully articulated plique-à-jour leaves. In the premier French decorative arts magazine Art et Décoration, the Anémone des Bois was praised for its "candid whiteness" and leaves that suggest "an infinitely complicated and precious architecture." Our Anémone des Bois is resplendent with the technical acuity that made Lalique known as the "master of modern bijoux (jewelry.)" In his early years, Lalique personally designed and modeled each mold for his creations in clay. These molds were then cast in iron and coated with a paste of resin and beeswax, hand-tooled for detail. The finish pressed-glass jewel was submerged in a bath of hydrofluoric acid, frosting the exterior. A thin layer of "jade green" powdered enamel was sifted and annealed onto the piece. The venation of each petal was painstakingly cut, revealing the plain crystal underneath. The warm glow of the gold backing gives the piece a breathtaking amber hue. Circa 1897. Signed, LALIQUE.

The career of the famed jewelry designer, glassmaker and decorative artist René Lalique spanned decades and artistic styles. Best known today for his works in glass, Lalique first won recognition for his jewelry. He was described as the inventor of modern jewelry by the French artist and designer Émile Gallé, and his luxurious naturalistic designs helped define the Art Nouveau movement. Later as a glassmaker in the 1920s and ‘30s, Lalique designed vases, clocks, chandeliers and even car hood ornaments that were the essence of Art Deco chic. Even now, the name Lalique continues to be a byword for a graceful, gracious and distinctively French brand of sophistication.


Born in 1860 in the Marne region of France, Lalique began his career as a jewelry designer in the last decades of the 19th century. His work employed now-classic Art Nouveau themes and motifs: flowing, organic lines; forms based on animals, insects and flowers — all rendered in luxurious materials such as ivory, enamel, gold and semi-precious stones. By 1905, Lalique had begun creating works in glass, and his style began to shift to a cleaner, sharper, smoother, more modern approach suited to his new medium. His Paris shop’s proximity to perfumer François Coty’s led him to experiment with beautiful perfume bottles. He offered the first customized scent bottles, transforming the perfume industry. By the end of the First World War, the artist had fully embraced Art Deco modernity, devoting himself to new industrial techniques of glass production and designs that manifest the sweeping lines and the forms suggestive of speed and movement characteristic of the style. Lalique’s work looked both backward and forward in time: embracing ancient mythological themes even as it celebrated modern progress.


Late in his career, Lalique took on high profile luxury interior design projects in Paris, Tokyo and elsewhere. He designed decorative fixtures and lighting for the interior of the luxury liner Normandie in 1935, and decorated the salons of well-known fashion designer Madeleine Vionnet. Today, Lalique’s influence is as relevant as it was when he opened his first jewelry shop in 1890. In a modern or even a traditional décor, as you will see from the objects offered on these pages, the work of René Lalique provides the stamp of savoir-faire.

About the Seller
4.8 / 5
Located in New York, NY
Recognized Seller
This designation is for sellers whose items consistently exemplify the best of 1stDibs.
Gold Seller
This distinction is for experienced sellers who continually surpass customer expectations.
1stDibs seller since 2010
75 sales on 1stDibs
Typical response time: 4 hours
More From This Seller
View All From Seller