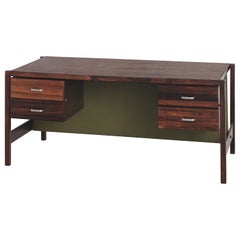 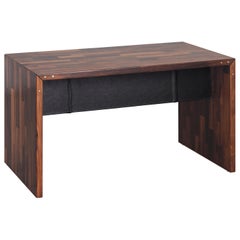 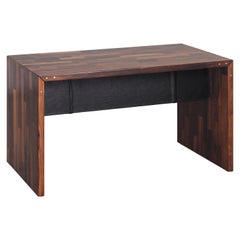 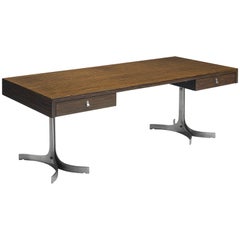 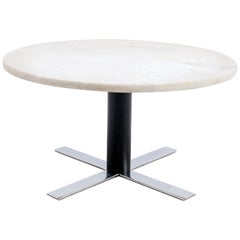 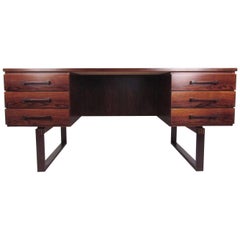 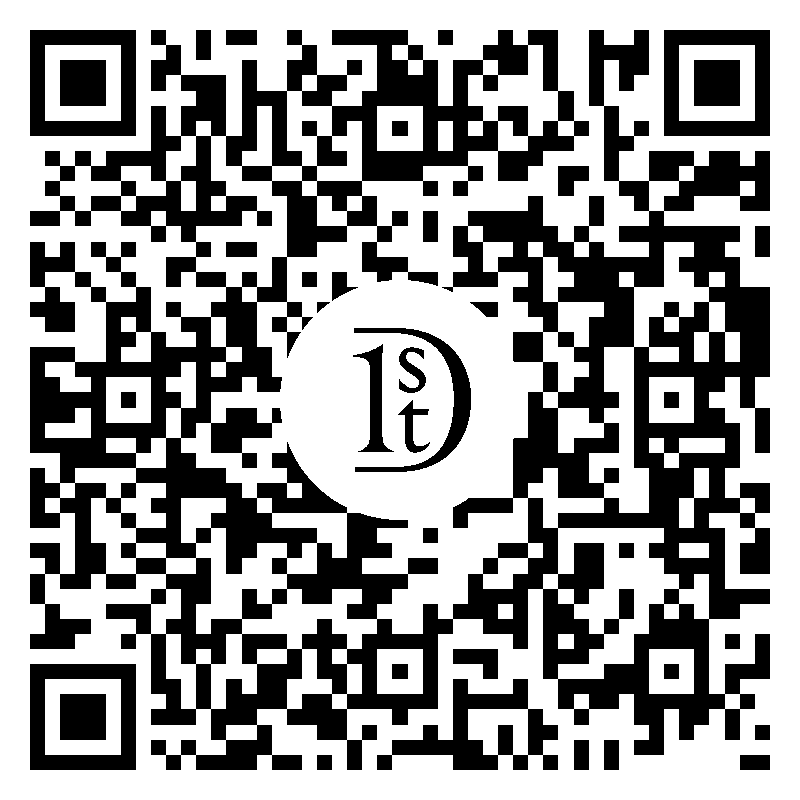 Jorge Zalszupin for l'Atelier, executive desk, Jacaranda rosewood, Brazil, 1960s. Large freestanding executive desk with integrated side table made of Jacaranda rosewood. This desk shows the excellent skills by Brazilian designer Jorge Zalszupin. The design is simplistic and shows nice construction details, which gives this writing table a more sturdy expression. Warm grains in different colors form this wonderful piece of design.  Please note the stunning details, such as the superb leather details in the handles, chrome details and wood carvings. A truly stunning piece of Brazilian design. Jorge Zalszupin (1922-), born in Warsaw, emigrated to Brazil as he want to '[...] emigrate far from Europe, impoverished by the constant wars, content in its past and against any sort of progress [...].' Zalszupin worked in a variety of areas such as design, architecture and interior design. He was a true designer of his time and place: using local wood and the most up to date techniques. Zalszupin was very much invested in Brazilian architecture: '[...] the architecture was new. The was none of that clinging to the past like there was in France.' This was also the reason that Zalszupin started l'Atelier: to manufacture the designs that fitted the new architecture and culture of Brazil. He treated the wood with loving care and designed both domestic and office furniture. Zalszupin is seen as one of the most important 20th century designers.

Just as emigrant Europeans — from Kem Weber and Paul Frankl to Marcel Breuer and Ludwig Mies van der Rohe — helped establish modernist design and architecture in the United States, so too did many of their peers foster the new design aesthetic in Brazil in the middle decades of the 20th century. Along with architect Lina Bo Bardi (from Italy) and Joaquim Tenreiro (from Portugal), there was Jorge Zalszupin, who arrived from Poland in 1949 and has since created consistently sleek and elegant chairs, tables and cabinets using the South American country’s vibrantly grained tropical hardwoods.

Zalszupin was born in Warsaw (his given first name is Jerzy) and went on to study architecture at the École des Beaux Arts in Bucharest, Romania, graduating in 1945. Zalszupin moved to Paris but found few opportunities in the postwar City of Light. He was impressed by articles on the work of Brazilian architect Oscar Niemeyer that he saw in the André Bloc–edited magazine L’Architecture d’Aujourd’hui (Architecture Today). And after sailing to South America, Zalszupin went to work with his fellow Pole and architect Luciano Korngold in São Paulo. Zalszupin began designing furniture as part of his architectural commissions and created several pieces for Niemeyer for use in the new capital city, Brasília. He opened his own design and manufacturing firm, L’Atelier, in 1959.

While Zalszupin cannot be said to have a signature style, his furniture designs all share a characteristic simplicity and purity of line and form. His work is often compared to that of Danish designers, most especially in their shared commitment to quality construction. He is a master of many materials: travertine marble for tabletops, slung leather for seating, man-made fabrics for upholstery and — his forte — highly figured woods such as jacaranda and rosewood. The latter plays prominently in two of Zalszupin’s best-known lounge chairs: the Brasiliana, with its austere, angular wood frame, and the Presidencial, with its curved seating shell and slatted backrest. Both chairs feature deep cushions and generous proportions in deference to the Brazilian proclivity for long and languid conversations. Yet both pieces — like all Zalszupin designs — possess a striking, tailored grace that would be perfect in any environment.

Established in 2007, Morentz has a team of approximately 55 restorers, upholsterers, interior advisers and art historians, making it a gallery, workshop and upholstery studio, all in one. Every day, a carefully selected array of 20th-century furniture arrives from all over the world at the firm’s warehouse, where the team thoroughly e...

Recognized Seller
This designation is for sellers whose items consistently exemplify the best of 1stDibs.
Diamond Seller
This distinction is for experienced sellers who continually surpass customer expectations.
Established in 2006
1stDibs seller since 2012
2,956 sales on 1stDibs
Typical response time: 1 hour
Associations
20th Century Specialists
More From This Seller
View All From Seller