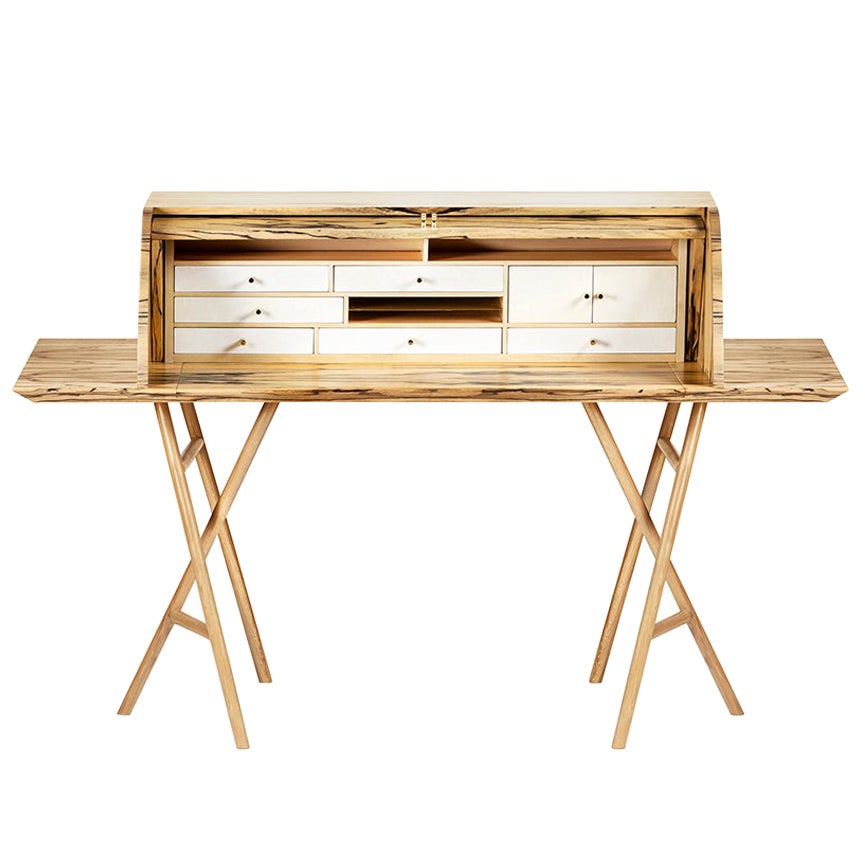 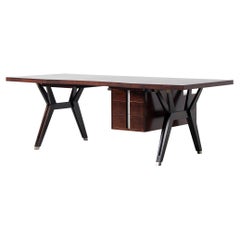 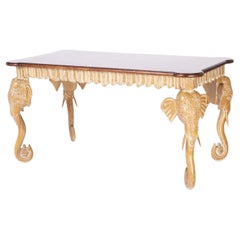 Charming French 19th Century Pine Provincial Desk or Side Table
Located in Hopewell, NJ
This French Provincial country pine table could serve many uses: as an intimate dining table, a desk, a side table, console, or could be cut down for a beautiful coffee table. Classi...
Category

Timeless 1960s Inspired JFK Desk in Black Ash
Located in Copenhagen, DK
With its pure and simplistic design the 1960s inspired JFK Desk is designed for the stylish home office. The desk has a slim table top of ash veneer with three inbuilt drawers and st...
Category

Angled French Desk with Drawers in Solid Pine
Located in Waalwijk, NL
Desk, pine, iron, France, 1960s This wonderful French desk features a dynamic shape. The tabletop is angled and ends in a triangular shape at one end. One compartment of drawers a...
Category

Ebonized Wood All Black MiMi Console or Tiny Desk by Miduny, Made in Italy
By Miduny, Ale Preda
Located in Brooklyn, NY
The faceted geometry of the MiMi console table creates a slender, elegant profile punctuated with angled surfaces that capture light. This sculptural and graceful design looks great ...
Category

Ebonized Wood All Black MiMi Console or Tiny Desk by Miduny, Made in Italy

Direttorio Writing Desk
By Morelato
Located in Milan, IT
Strict and classic lines for the small and large Direttorio Writing desks. Pieces, which combine function and elegance making each room unique and timeless. This writing desk is made...
Category

Custom Walnut Desk with Drawer, Made to Order by Petersen Antiques
By Ken Petersen
Located in Los Angeles, CA
This desk made from walnut is seen here in 44" x 28" x 30" H, however it can be built in any size. Because each table is bench-made in our own Los Angeles workshop you can influe...
Category

Custom Walnut Desk with Drawer, Made to Order by Petersen Antiques

Danish Desk in Teak with Five Drawers
Located in Waalwijk, NL
Desk with drawers, teak, brass, Denmark, 1950s Functional desk with lockable drawers. This Scandinavian Modern desk is made of teak wood in a warm color tone. Underneath the table...
Category

Minimalist Travertine Concrete Industrial Pedestal Dining Table
By Angelo Mangiarotti, Giovanni Offredi
Located in Las Vegas, NV
Nothing short of amazing. Solid travertine dining table straight from Italy. Has the appearance of polished concrete. A clear finish could be applied to bring out more of the color i...
Category

21th Century Desk Wight Ebony and Black Leather with Metal Leg by Aymeric Lefort
By Aymeric Lefort
Located in SENLIS, OISE
A semi-circular black lacquered metal legged desk with a white ebony veneer top and black leather desk blotter. The top of the back legs ends with a LED light. Information about the...
Category

Oslo Belmont Desk in Ash by Studio Moe
Located in Portland, OR
Combining utility with elegance, this desk is a graceful statement in any home or office. Our handcrafted dovetailed drawers and elegant joinery unite, making sitting down to work a ...
Category

Oslo Writing Desk in Ash by Studio Moe
Located in Portland, OR
Look to the clean lines and natural keep-it-simple design of the Oslo Writing Desk, to bring inspiration to your next idea or project. A single spacious dovetailed drawer provides ut...
Category

Desk, Shagreen with Brass and Palm Wood Details, Three Drawers, in Stock, New
By R & Y Augousti
Located in New York, NY
Decorative shagreen desk with palm wood and brass details. The desk is finished all around. Desk legs are beautifully curved with palm wood and shagreen. The desk has a brass desig...
Category

Presidential Style Desk Attributed to Osvaldo Borsani for Tecno
By Osvaldo Borsani
Located in London, GB
Large Presidential style desk in rosewood veneer. The metal tripod feet have practical castors whilst the left hand drawer unit pivots. There are three drawers on the right and the o...
Category

Choosing the perfect writing desk or writing table is a profoundly personal journey, one that people have been embarking upon for centuries.

Queen Atossa of Persia, from her writing table circa 500 B.C., is said to have been the originator of the art of handwritten letters. Hers was reportedly the first in a long and colorful history of penned correspondence that grew in popularity alongside literacy. The demand for suitable writing desks, which would serve the composer of the letters as well as ensure the comfort of the recipient naturally followed, and the design of these necessary furnishings has evolved throughout history.

Once people began to seek freedom from the outwardly ornate styles of the walnut and rosewood writing desks and drafting tables introduced in the name of Queen Victoria and King Louis XV, radical shifts occurred, such as those that materialized during the Art Nouveau period, when designers longed to produce furniture inspired by the natural world’s beauty. A prime example is the work of the famous late-19th-century Spanish architect Antoni Gaudí — his rolltop desk featured deep side drawers and was adorned with carved motifs that paid tribute to nature. Gaudí regularly combined structural precision with decorative elements, creating beautiful pieces of wood and metal.

Soon afterward, preferences for sleek, geometric, stylized forms in furniture that saw an emphasis on natural wood grains and traditional craftsmanship took hold. Today, Art Deco desks are still favored by designers who seek to infuse interiors with an air of luxury. One of the most prominent figures of the Art Deco movement was French decorator and furniture designer Émile-Jacques Ruhlmann. With his use of neoclassical motifs as well as expensive and exotic materials such as imported dark woods and inlays of precious metals for his vintage writing desks, Ruhlmann came to symbolize good taste and modernity.

The rise in appreciation for Scandinavian modernism continues to influence the design of contemporary writing desks. It employs the “no fuss” or “less is more” approach to creating a tasteful, sophisticated space. Sweden’s master cabinetmaker Bruno Mathsson created gallery-worthy designs that are as functional as they are beautiful. Finnish architect Alvar Aalto never viewed himself as an artist, but, like Mathsson, his furniture designs reflected a fondness for organic materials and a humanistic approach. Danish designers such as Hans Wegner introduced elegant shapes and lines to mid-century desks and writing tables, often working in oak and solid teak.

From vintage desks to contemporary styles, 1stDibs offers a broad spectrum of choices for conducting all personal and business writing and reading activities.

Leaping into a design project, whether it's refreshing the bedroom or redoing the whole house, can be overwhelming. Luckily, we know more than a few interior designers. You asked questions on Instagram, and now they're answering.

Proof that working from home is a perk.