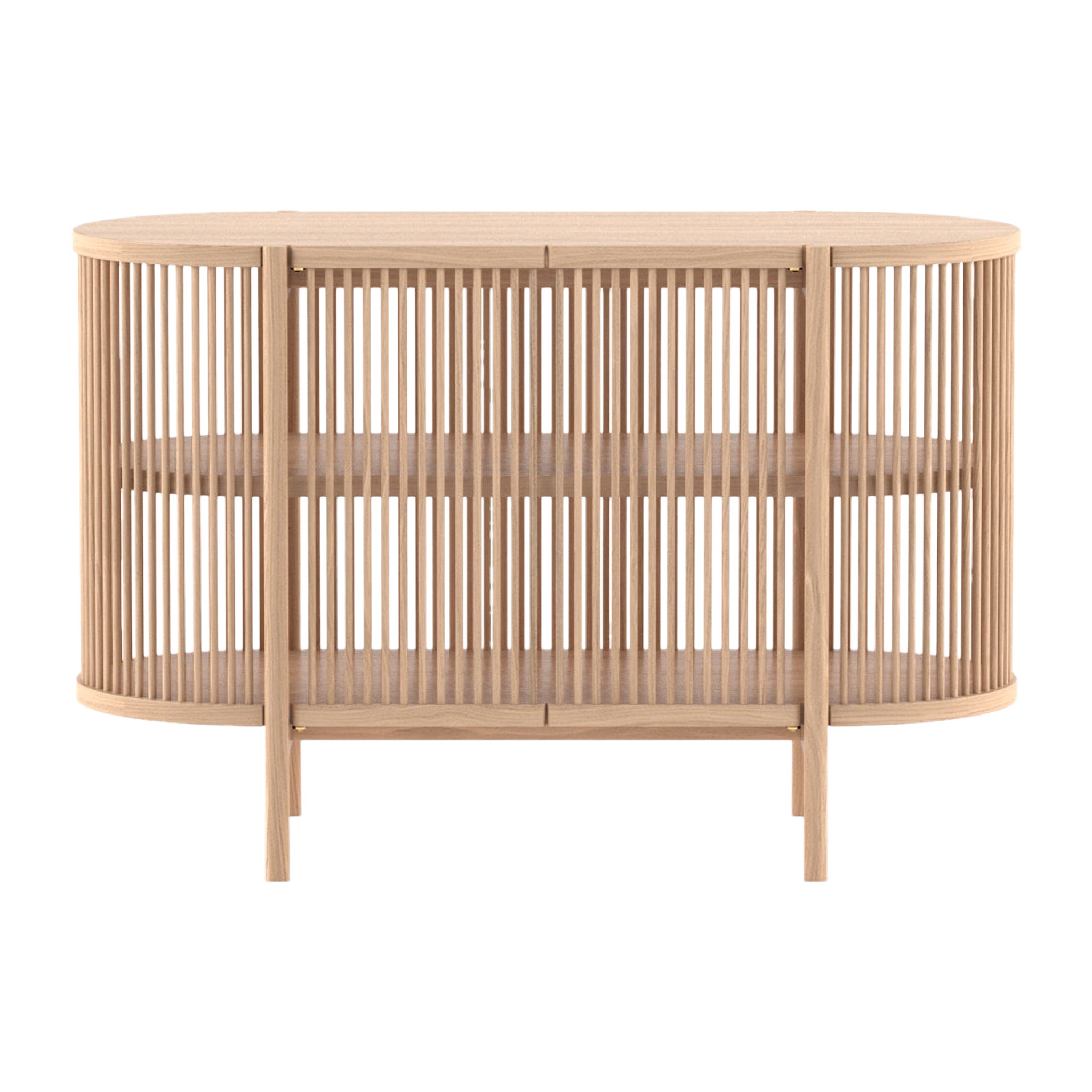 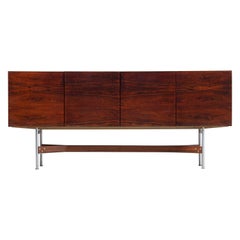 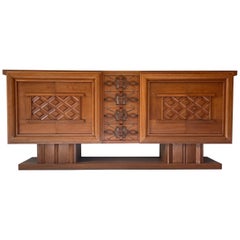 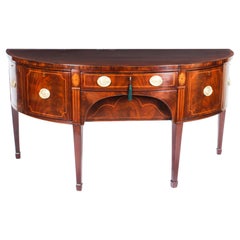 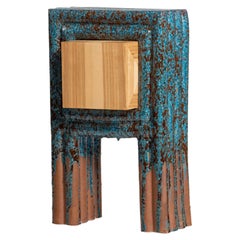 21st Century Marea Inlaid Sideboard in Ash, Walnut, Mahogany, Made in Italy
By Hebanon Studio, Hebanon Fratelli Basile
Located in Nocera Superiore, Campania
The Marea sideboard is dressed in the warm, deep colors of a sunset by the sea, an inlay that embraces the surfaces like waves shining in the last rays of the sun. Because no home sh...
Category

Large Sideboard of Oak by Maurice & Leon Jallot, 1930-40
By Maurice and Léon Jallot
Located in Miami, FL
Large sideboard of oak. Front with four doors (one shelf on each part) and four drawers, on which ornaments and handles of iron.
Category

Contemporary Sideboard in Walnut and White Ceramic Top
Located in New York, NY
Sideboard in American walnut veneer with 4 push-pull doors, inside glass shelf and metal base. Metal stripe in the middle of the cabinet in dark bronze finish. Base finish: Dark ...
Category

Karl Springer Lacquered Goatskin Credenza
By Aldo Tura, Karl Springer
Located in Las Vegas, NV
Don't miss this piece. This Massive Karl Springer piece is fantastic. Measuring in at 9 feet in length, it truly is unlike any piece of its kind. Finished in the notorious goatski...
Category

Dresser "The Groove" in Organic Design, Coloured, European, Handmade
By Eckehard Weimann
Located in Dietmannsried, Bavaria
Dresser "the groove" in organic design. Created by the German carpenter and sculptor Eckehard Weimann. The plywood body is handcrafted organically with wrinkles and creases. The g...
Category

Grand Art Deco French Sideboard in Macassar Wood
Located in Houston, TX
Sideboard has exceptional inlaid wood work that is proudly displayed on the front of the sideboard. Sideboard is made out of 3 rectangular forms that are placed one on top of other. ...
Category

Modern Sideboard with Marble Top and Metal Drawers
By Renats Kotlevs
Located in Riga, LV
Made from ash veneer with steel legs, copper, bronze and brass drawers and unique marble top. It is wonderfully smooth to the touch and looks fantastic. Sideboard Soleil is beautiful...
Category

Jacobean Revival Carved Oak Server or Dry Bar
Located in Los Angeles, CA
This gorgeous carved oak server cabinet is in the Jacobean Revival style with intricate detailing and ample storage space. We also have in other listings the matching pieces from thi...
Category

2K1M Grooves Sideboard, Entertainment Unit, High Gloss Lacquer and Oak Finish
By 2K1M
Located in Toronto, CA
This sideboard, entertainment unit is part of the “Grooves” Collection. Freestanding with plenty of storage with a combination of pull-outs, drawers and cabinets. The Grooves Col...
Category

Jacobean Revival Carved Oak Sideboard Credenza
Located in Los Angeles, CA
This gorgeous carved oak sideboard credenza is in the Jacobean Revival style with intricate detailing and ample storage space. We also have in other listings the matching pieces from...
Category

Ebb & Flow Modern Organic Credenza Made from River Rescued Ancient Wood
By Tréology
Located in Papanui, Christchurch
The Ebb & Flow credenza was inspired by our observations of an ocean worn cliff face on the wild West Coast of New Zealand. Our search for design inspiration took us on an adventure ...
Category

Mid-Century Sideboard in the Style of Alfred Altherr, Ash and Brass, Germany 50s

Italian Mid-Century Sideboard Honey Color in Birch Wood, 1950s
Located in Traversetolo, IT
Beautiful Italian mid-century sideboard made of birch wood that gives the sideboard a warm honey color. The sideboard has a shaped front design, as well as rounded sides. It is notab...
Category

Sideboard Solid Wood in Organic Design, Handcrafted in Germany,
By Eckehard Weimann
Located in Dietmannsried, Bavaria
These sideboards are made by hand in organic design. The furniture is very sculptural but modern, through the surfaces with wrinkles and bumps creates a play with light and shadow. T...
Category

Petit Bastone Sideboard in Oak
By Poiat
Located in Helsinki, FI
The Petit Bastone sideboard is a new addition to the Bastone case piece collection. It is designed by the master cabinet maker and designer Antrei Hartikainen for Poiat. The Basto...
Category

John Van Koert 2pc. Cabinet for Drexel Profile
By John Van Koert
Located in Cincinnati, OH
A two piece cabinet with lower sideboard having four drawers one with dividers and two doors to each side with an adjustable shelve . The sculptural pulls are in a satin chrome , the...
Category

Jim Rose Steel Furniture - Eight-Drawer Blue Green Strip Quilt Counter
By Jim Rose
Located in Chicago, IL
This modern 8-drawer counter is made from hot roll blue steel with the front panel design based on the Gees Bend Quilts. Each panel is unique with the use of galvanized rusted steel ...
Category

Mid-Century Italian Sideboard in Wood with Handcraft Handles, 1950s
Located in Montecatini Terme, IT
Unique sideboard with three doors and inner shelves and dressers made of wood with handcraft handles and brass details. Essential lines and a timeless character distinguish this pie...
Category

Brutalist Two-Door Pine Sideboard Credenza, France 1920s
Located in New York, NY
Fantastic two-door pine sideboard made with rough-hewn planks. Of note, the very minimal hinges. This piece is most likely from the French Alps, given its style and construction. Ori...
Category

Dresser "the groove" Handmade in Organic Design, also as a sideboard, solid wood
By Eckehard Weimann
Located in Dietmannsried, Bavaria
Solid wood chest of drawers "the groove" in organic design. Created by the German carpenter and sculptor Eckehard Weimann. The body is organically worked out, wrinkles and creases lo...
Category

Dresser "the groove" Handmade in Organic Design, also as a sideboard, solid wood

Once simply boards made of wood that were used to support ceremonial dining, sideboards have taken on much greater importance since their modest first appearance. In Italy, the sideboard was basically a credenza, a solid furnishing with cabinet doors. It was initially intended as an integral piece of any dining room where the wealthy gathered for meals in the southern European country.

Later, in England and France, sideboards retained their utilitarian purpose — a place to keep hot water for rinsing silverware and from which to serve cold drinking water — but would evolve into double-bodied structures that allowed for the display of serveware and utensils on open shelves. We would likely call these buffets, as they’re taller than a sideboard. (Trust us — there is an order to all of this!)

The sideboard is often deemed a buffet in the United States, from the French buffet à deux corps, which referred to a storage and display case. However, a buffet technically possesses a tiered or shelved superstructure for displaying attractive kitchenware and certainly makes more sense in the context of buffet dining — abundant meals served for crowds of people.

An antique or vintage sideboard today is a sophisticated and stylish component in sumptuous dining rooms of every shape, size and decor scheme, as well as a statement of its own, showcased in art galleries and museums. Furniture maker and artist Paul Evans, whose work has been the subject of various celebrated museum exhibitions, created ornamented, welded and patinated sideboards for Directional Furniture, collections such as the Cityscape series that speak to his place in revolutionary brutalist furniture design as much as they echo the origins of these sturdy, functional structures centuries ago.

If mid-century modern sideboards are more to your liking than an 18th-century mahogany sideboard with decorative inlays by Hepplewhite, the particularly elegant pieces crafted by designers Hans Wegner, Edward Wormley or Florence Knoll are often sought by today’s collectors.

Whether you have a specific era or style in mind or you’re open to browsing a vast collection to find the right fit, 1stDibs has a variety of antique, new and vintage sideboards to choose from.