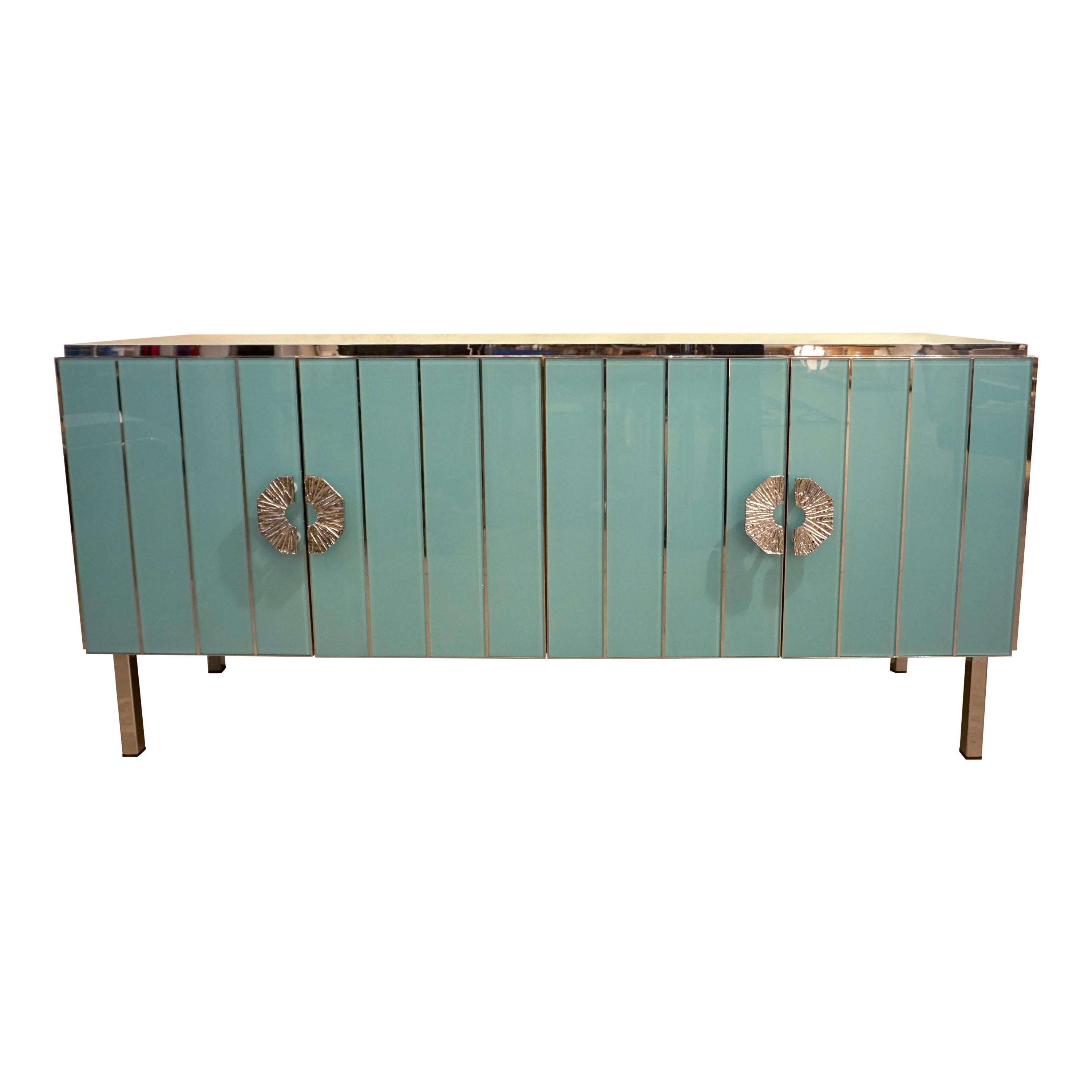 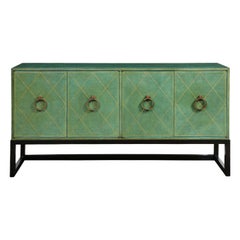 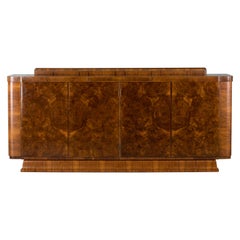 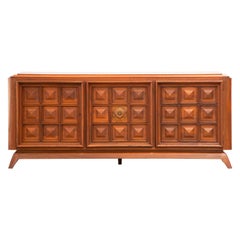 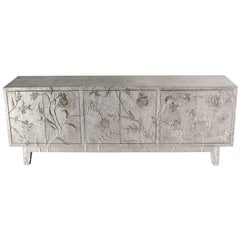 Floral Credenza in White Metal over Teak
By Stephanie Odegard Collection
Located in New York, NY
Inspired by the floral motifs used in the paintings of palaces of Rajasthan. One of the bestselling pieces of Stephanie Odegard collection. This elegant piece is handmade from solid ...
Category

Frank Guille 50s Danish Sideboard Teak
By Frank Guille
Located in Valladolid, ES
Amazing Danish design sideboard made in the 50s by Frank Guille (renowned Danish midcentury designer), it is a timeless piece, of perfect size to place in any space. The entire struc...
Category

Ivory Sideboard in Brass and Colorful Lacquered Wood, Geometric-Shaped
By Matì
Located in Tradate, IT
Eunduetrè is a low storage system which punctuates the space and plays with contrasting effects. Extremely simple in its geometric shapes, this sideboard/credenza alternates colorful...
Category

"Espresso Love" Kitchen Cabinet Maple and Dark Walnut by Ivan Paradisi
By Ivan Paradisi
Located in Turin, IT
The unique and complex design of this eye-catching cabinet seems to Challenge the Classic tradition of cabinetmaking with its unexpected geometrical silhouette. Crafted entirely of m...
Category

Haast Modern Ancient River Wood Credenza Aged Copper Base and Leather Handles
By Tréology
Located in Papanui, Christchurch
The Haast credenza is made from ancient matai trees (a native timber of New Zealand) that have fallen naturally into rivers and preserved for hundreds of years under sediment layers ...
Category

Green Finn-Ply Cabinet with Bronze Pulls and Turned Bronze Legs
By Chris Lehrecke
Located in Bangall, NY
This version of the Classic Finn Ply cabinet, in the brand new shade of Green! This cabinet features a center section of drawers on wooden slides, and two sections with doors and adj...
Category

Textured Red Cabinet with Lacquered Surface
Located in Waalwijk, NL
Cabinet, red lacquer, wood, brass, Europe, 1960s This elegant red cabinet show traits of a chinoiserie. The base design is simple yet the finish is structured. Another beautiful d...
Category

Ebb & Flow Modern Organic Credenza Made from River Rescued Ancient Wood
By Tréology
Located in Papanui, Christchurch
The Ebb & Flow credenza was inspired by our observations of an ocean worn cliff face on the wild West Coast of New Zealand. Our search for design inspiration took us on an adventure ...
Category

High Gloss Black Credenza with Drawers and Large Storage
By Renats Kotlevs
Located in Riga, LV
The definition of rich furniture design, this beautiful sideboard is handmade with high-gloss black panels. Luxurious brass pieces bring detail to its base and are referenced by the ...
Category

Sideboard Solid Wood in Organic Design, Handcrafted in Germany,
By Eckehard Weimann
Located in Dietmannsried, Bavaria
These sideboards are made by hand in organic design. The furniture is very sculptural but modern, through the surfaces with wrinkles and bumps creates a play with light and shadow. T...
Category

Gothic Revival Style Dragon Motif Brass and Leather Mahogany Oak Dining Set
Located in Chattanooga, TN
This 8-piece set begs a lot of questions. Some will remain unknown, but we'll do our best. First, take a broad, sweeping overview and lets all just agree this dining set is beyond am...
Category

Brutalist Inspired Dresser / Credenza, with Leather and Brass by Kate Duncan
By Kate Duncan
Located in Toronto, Ontario
Designed to be noticed and built to last for generations. Our Credenza's strong lines and bold structure are borrowed from the architecture of the Brutalist movement. Solid hardwoods...
Category

Credenza M04 Contemporary Cabinet Lacquer White Oak Marble Counter Made in Italy
By 2K1M
Located in Toronto, CA
This elegant and unique crafted Credenza, Made in Italy and designed by Naji Mourani, will complement your environment and fit-in your living, dining spaces. In a Hotel Room, a lobby...
Category

Connect Credenza Cabinet or Sideboard Customizable in Steel and Aged Brass
By Henry Norris, New Format Studio
Located in Vancouver, BC
The Connect Credenza is emblematic of the contemporary interweaving of mass manufacturing and traditional joinery technique. Construction and fastening details remain as evidence of ...
Category

RIMA Credenza, 2M Solid Black Oakwood
By Caterina Moretti
Located in Zapopan, Jalisco
Between the sculpture and the functionality of the object, the RIMA credenza is inspired by the dynamism and the cadence of a poem, drawing all the attention to the wooden slats that...
Category

Contemporary Sculptural Steel Black Credenza Buffet Bar Handcrafted USA
By Felicia Ferrone
Located in Chicago, IL
A study in positive and negative space, the modern contemporary black steel metal Ahn credenza bar or buffet is ever changing depending on how it is positioned and viewed in a room. ...
Category

1970, Wide Credenzas Sideboard in Walnut with Chrome Handles and Legs
Located in Silvolde, Gelderland
Extreme beautiful and extra wide credenzas / sideboard, 118 inches, in walnut on chrome legs. It's a great quality piece and the overall condition is very good!
Category

1970, Wide Credenzas Sideboard in Walnut with Chrome Handles and Legs

Mid-Century Modern Milo Baughman Burl Wood Chrome Sideboard Credenza, 1970s
By Milo Baughman
Located in Keego Harbor, MI
For your consideration is a brilliant, burlwood credenza, on chrome legs, in the style of Milo Baughman, circa the 1970s. In excellent vintage condition. The dimensions are 72" W x 1...
Category

Santee Sideboard Cabinet in Walnut
By Greg Mitchell
Located in Los Angeles, CA
The namesake of this piece is an alley one block from our Los Angeles studio, known for its bazaar-like display of stalls hawking clothes and textiles at wholesale prices. The scene ...
Category

Dune Allen Credenza in Solid Walnut
By Greg Mitchell
Located in Los Angeles, CA
The Dune Allen credenza is crafted to handle all your storage needs with refined simplicity. Clean lines and strong joinery amount to a piece that is sturdy, yet elegant. The carcass...
Category

Dean James Two Tone Black and Natural Walnut Solid Wood Credenza
By Brett Paulin
Located in Toronto, Ontario
The Dean James credenza features a cabinet constructed entirely of solid walnut. The casing is finished in India ink, while the doors and back panels are natural walnut. The entire c...
Category

Mid-Century Modern Round Credenza in Wood and Metal
By Jorge Elizondo
Located in San Miguel de Allende, Guanajuato
Lao credenza, defined by its bold geometric silhouette. Loa Credenza lends your layout a dash of modern style as it offers essential display space for the most precious of possession...
Category

Mid-Century Modern Round Credenza in Wood and Metal

Minimalist Mid-Century Modern Style Credenza in Solid Wood
By Jorge Elizondo
Located in San Miguel de Allende, Guanajuato
The staple of modern contemporary furniture, this wood credenza instantly enamors with its pastel colors and clean lines. Bold in appearance and functional in use, this showstopping ...
Category

French Art Deco Sideboard from the 1930s
Located in bari, IT
Small sideboard in Art Deco style, in carved wood French production from the 1930s.
Category

Antique and vintage credenzas can add an understated touch of grace to your home. These long and sophisticated cabinet-style pieces of furniture can serve a variety of purposes, and they look great too.

In Italy, the credenza was originally a small side table used in religious services. Appropriately, credere in Italian means “to believe.” Credenzas were a place to not only set the food ready for meals, they were also a place to test and taste prepared food for poison before a dish was served to a member of the ruling class. Later, credenza was used to describe a type of versatile narrow side table, typically used for serving food in the home. In form, a credenza has much in common with a sideboard — in fact, the terms credenza and sideboard are used almost interchangeably today.

Credenzas usually have short legs or no legs at all, and can feature drawers and cabinets. And all kinds of iterations of the credenza have seen the light of day over the years, from ornately carved walnut credenzas originating in 16th-century Tuscany to the wealth of Art Deco credenzas — with their polished surfaces and geometric patterns — to the array of innovative modernist interpretations that American furniture maker Milo Baughman created for Directional and Thayer Coggin.

The credenza’s blend of style and functionality led to its widespread use in the 20th century. Mid-century modern credenzas are particularly popular — take a look at Danish furniture designer Arne Vodder’s classic Model 29, for instance, with its reversible sliding doors and elegant drawer pulls. Hans Wegner, another Danish modernist, produced strikingly minimalist credenzas in the 1950s and ’60s, as did influential designer Florence Knoll. Designers continue to explore new and exciting ways to update this long-loved furnishing.

Owing to its versatility and familiar low-profile form, the credenza remains popular in contemporary homes. Unlike many larger case pieces, credenzas can be placed under windows and in irregularly shaped rooms, such as foyers and entryways. This renders it a useful storage solution. In living rooms, for example, a credenza can be a sleek media console topped with plants and the rare art monographs you’ve been planning to show off. In homes with open floor plans, a credenza can help define multiple living spaces, making it ideal for loft apartments.

Browse a variety of antique, new and vintage credenzas on 1stDibs to find the perfect fit for your home today.