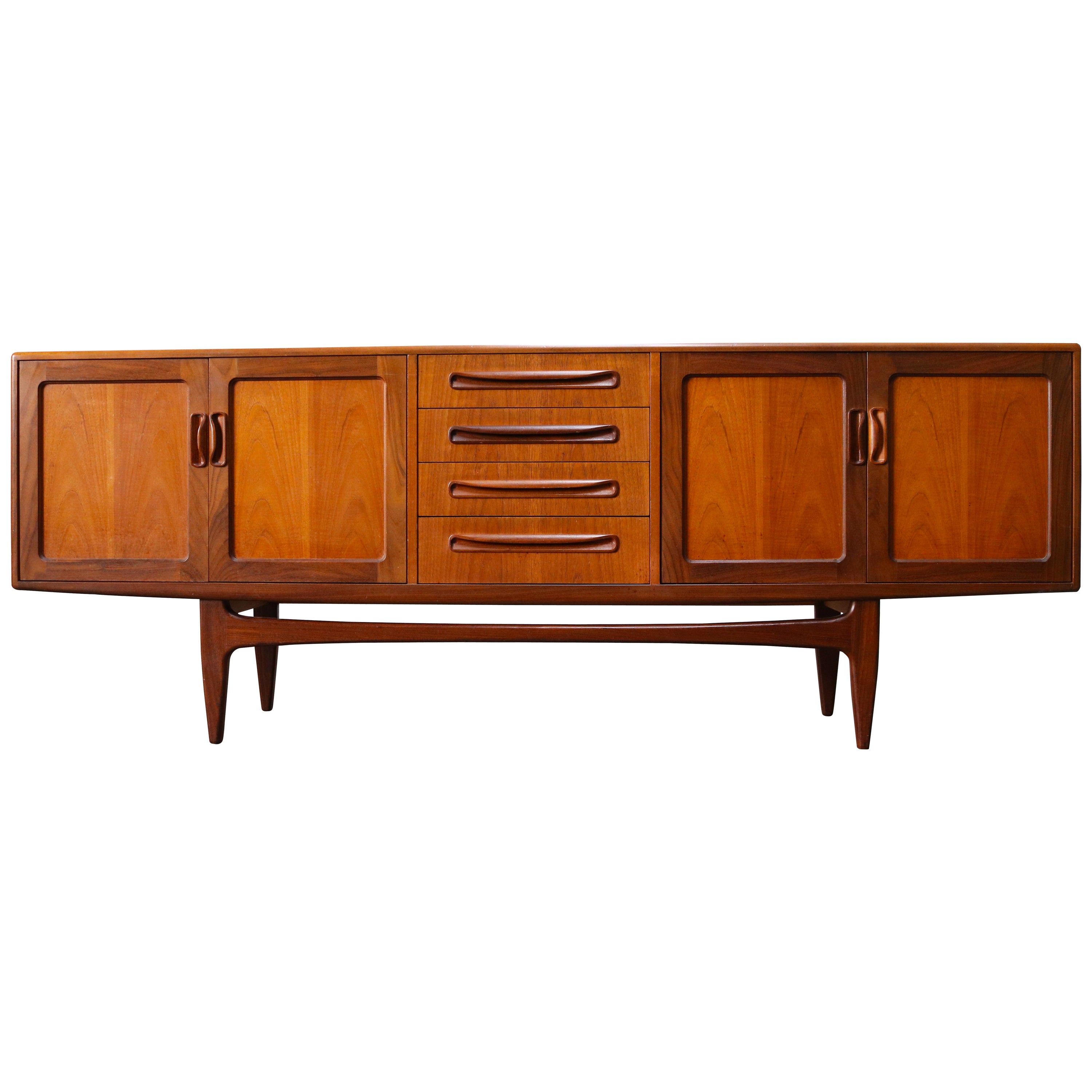 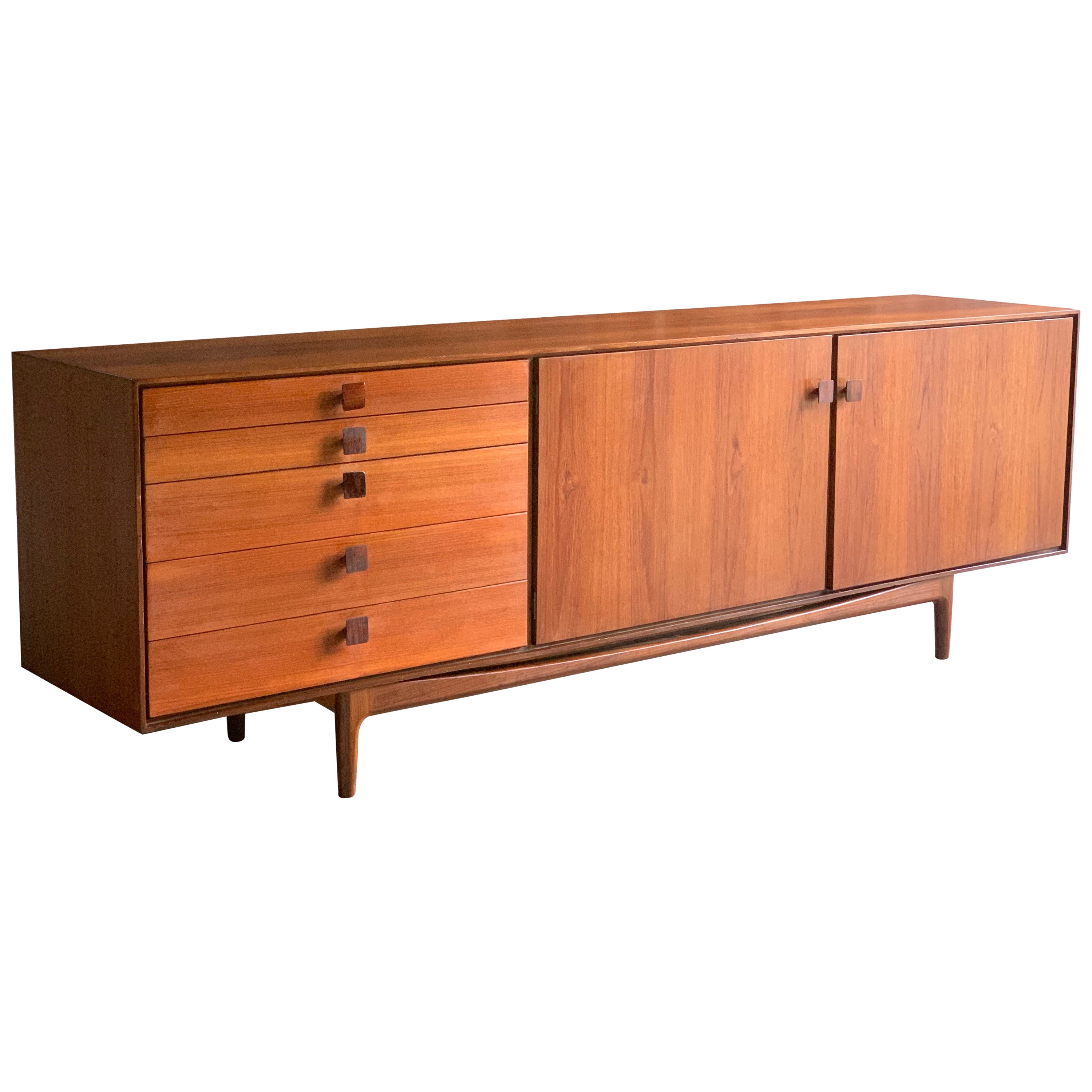 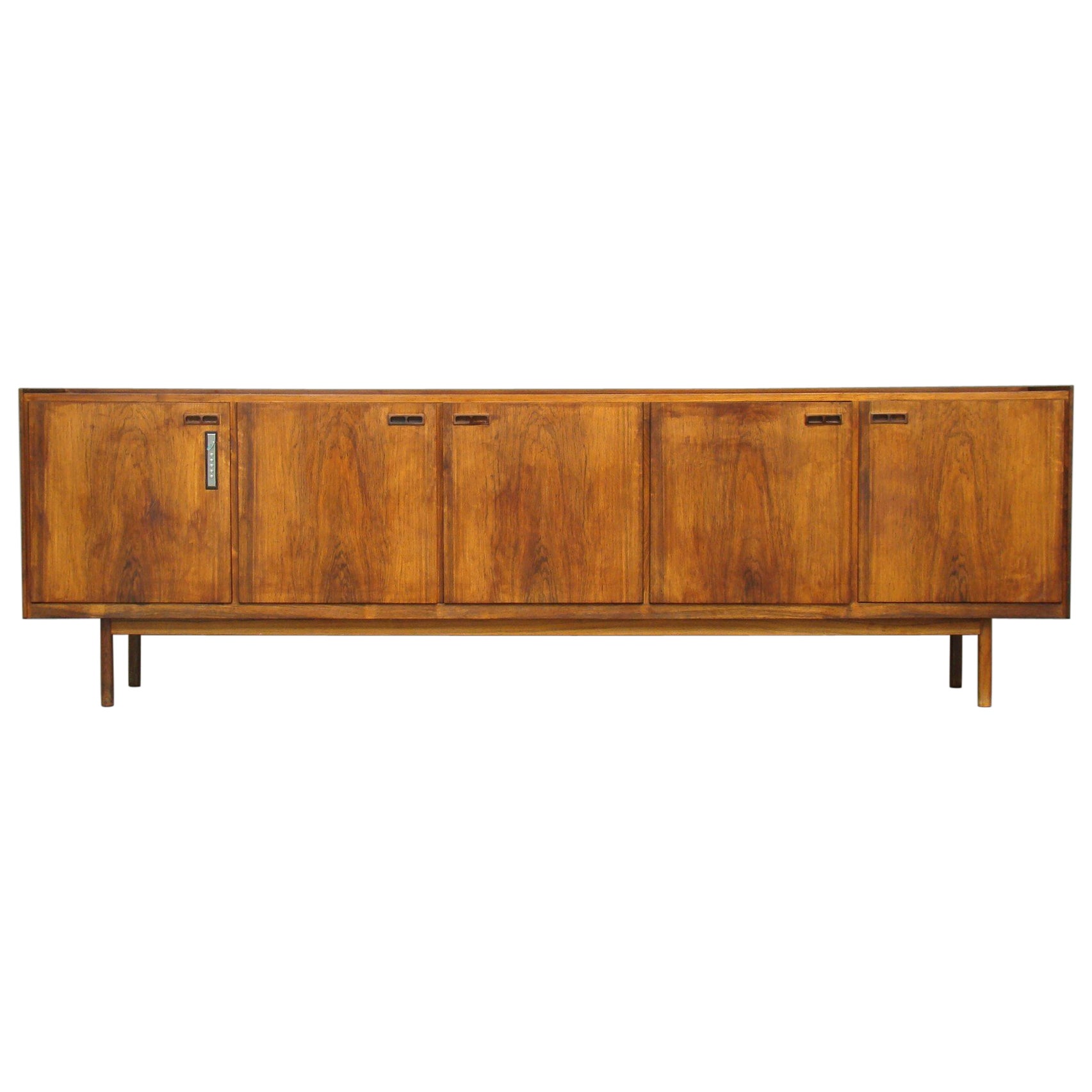 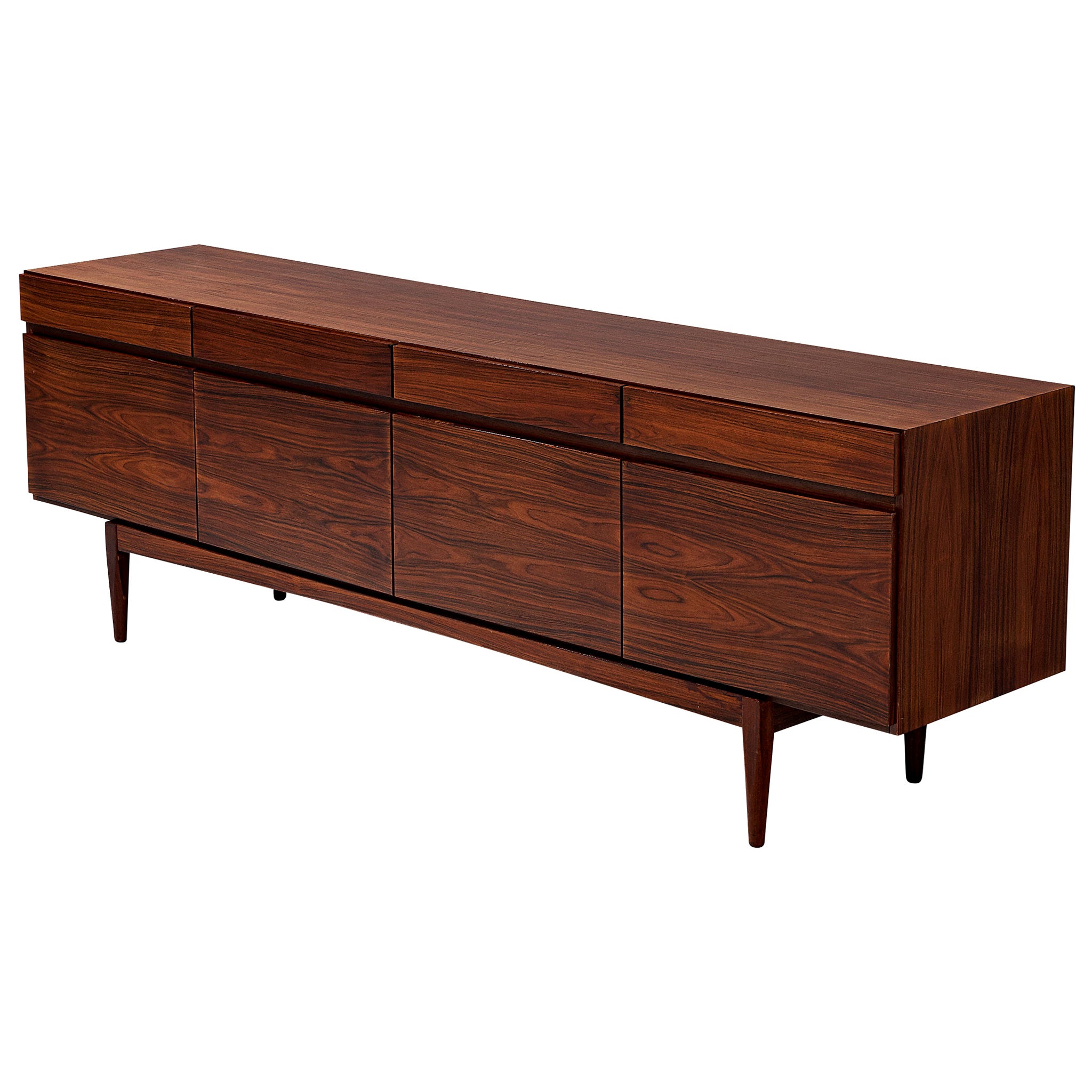 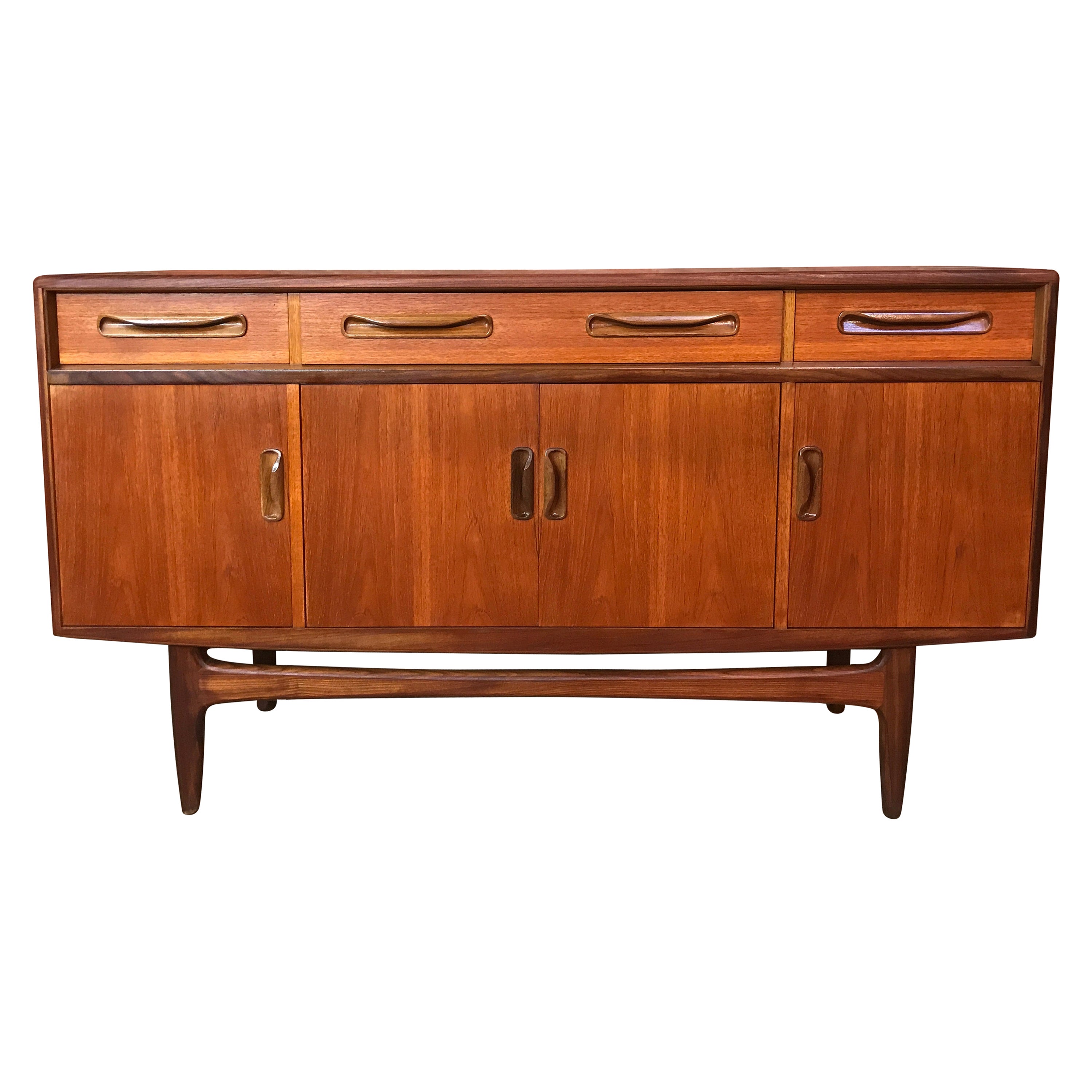 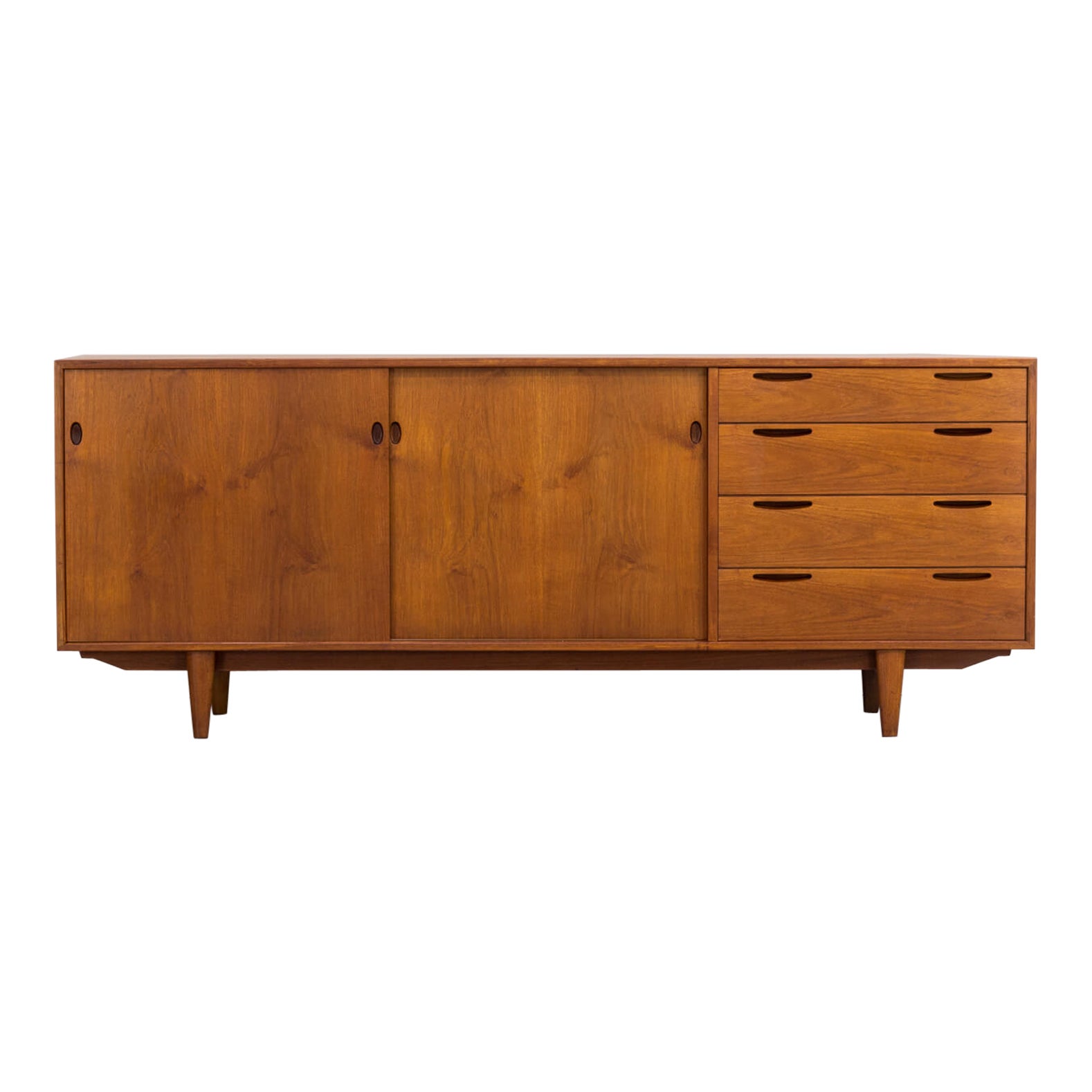 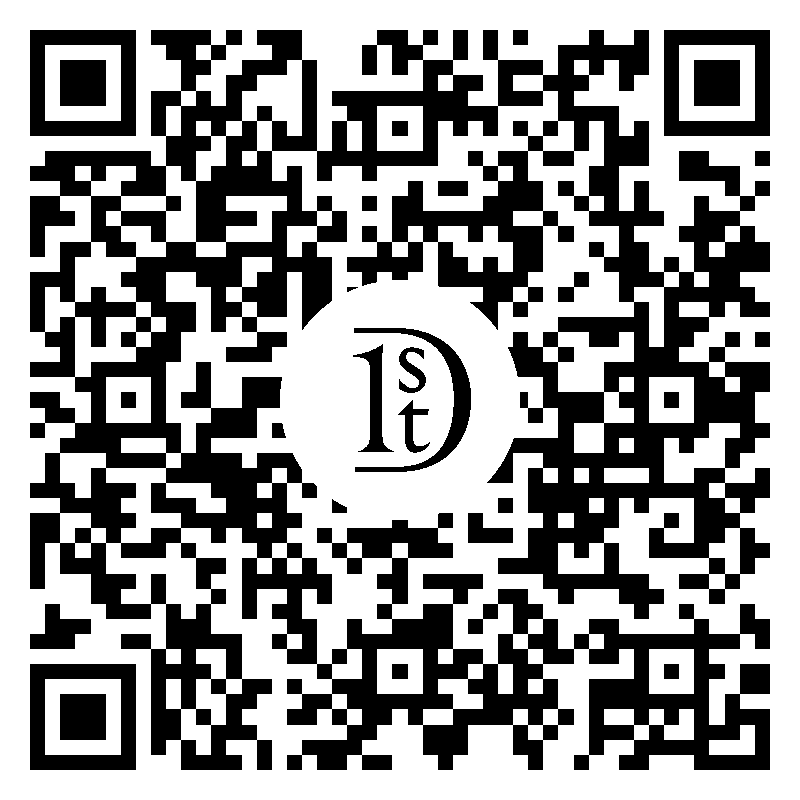 Ib Kofod-Larsen for G-Plan/E. Gomme Ltd., sideboard, model 4060, teak, rosewood, Denmark/United Kingdom, 1960s Excellent sideboard, designed by Ib Kofod-Larsen for G-Plan in 1966. This highly succesful British furniture brand manufactured an entire living room set designed by Kofod-Larsen, consisting of this sideboard, a matching dining table and dining chairs. This 'Danish' line is considered the best furniture G-Plan has produced. The sideboard is manufactured in warm teak, with contrasting rosewood handles. Large split circular handles are a distinct feature of this sideboard. The credenza features several drawers, of which one has been made especially to store cutlery. Elegant tapered legs lift the sideboard up. Ib Kofod-Larsen (1921-2003) was a Danish furniture designer who studied at the Danish Royal Academy in Copenhagen. After his degree, he quickly became recognized. As he won several prices of which one from the Danish Cabinetmakers Guild. It was this price that led to the collaboration between manufacturer Faarup Møbelfabrik, and Kofod-Larsen. Later, he also collaborated with other manufacturers such as High Wycombe and Christensen & Larsen. His designs are recognized by the use of rich, durable materials such as rosewood, teak and the highest quality leather. He is known for enhancing these noble materials by means of his aesthetics, leaving the form, grain or other characteristics to speak for themselves. His most praised designs are all elegant, sculpted pieces such as the U-56 Elizabeth chair.

Recognized Seller
These prestigious sellers are industry leaders and represent the highest echelon for item quality and design.
Diamond Seller
These expertly vetted sellers are 1stDibs' most experienced sellers and are rated highest by our customers.
Established in 2006
1stDibs seller since 2012
3,028 sales on 1stDibs
Typical response time: 1 hour
Associations
20th Century Specialists
More From This Seller
View All From Seller