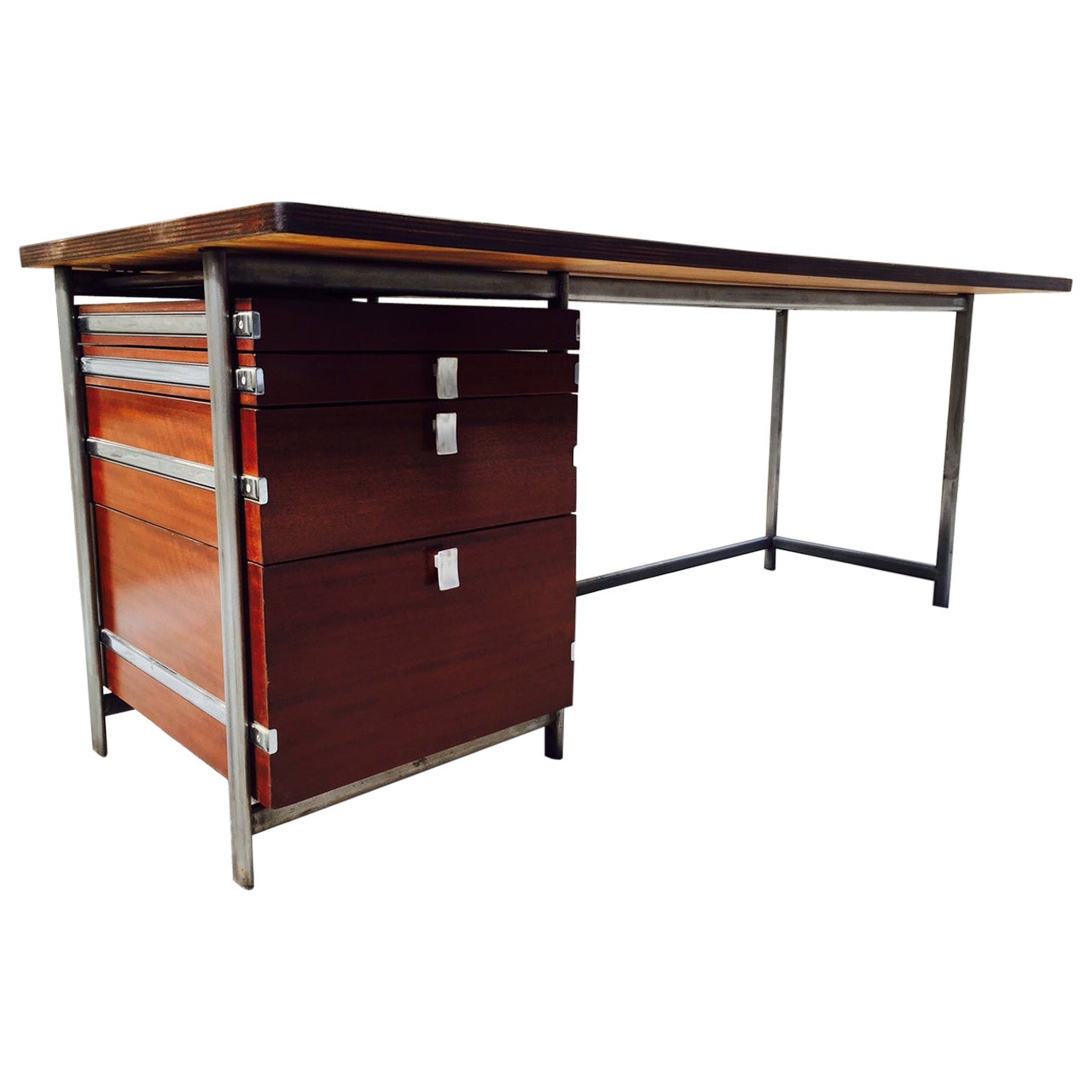 Pair of Cabinets by Jules Wabbes 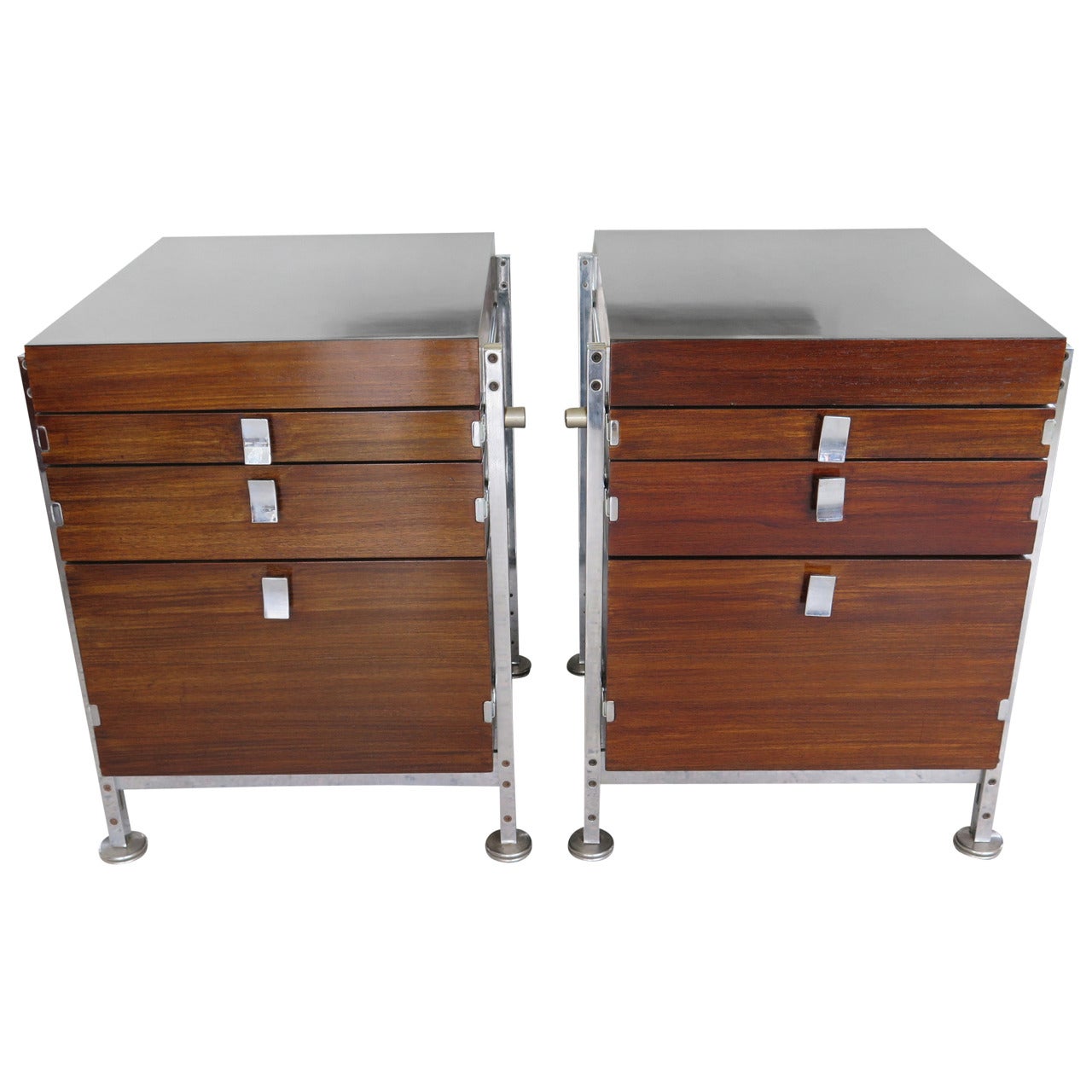 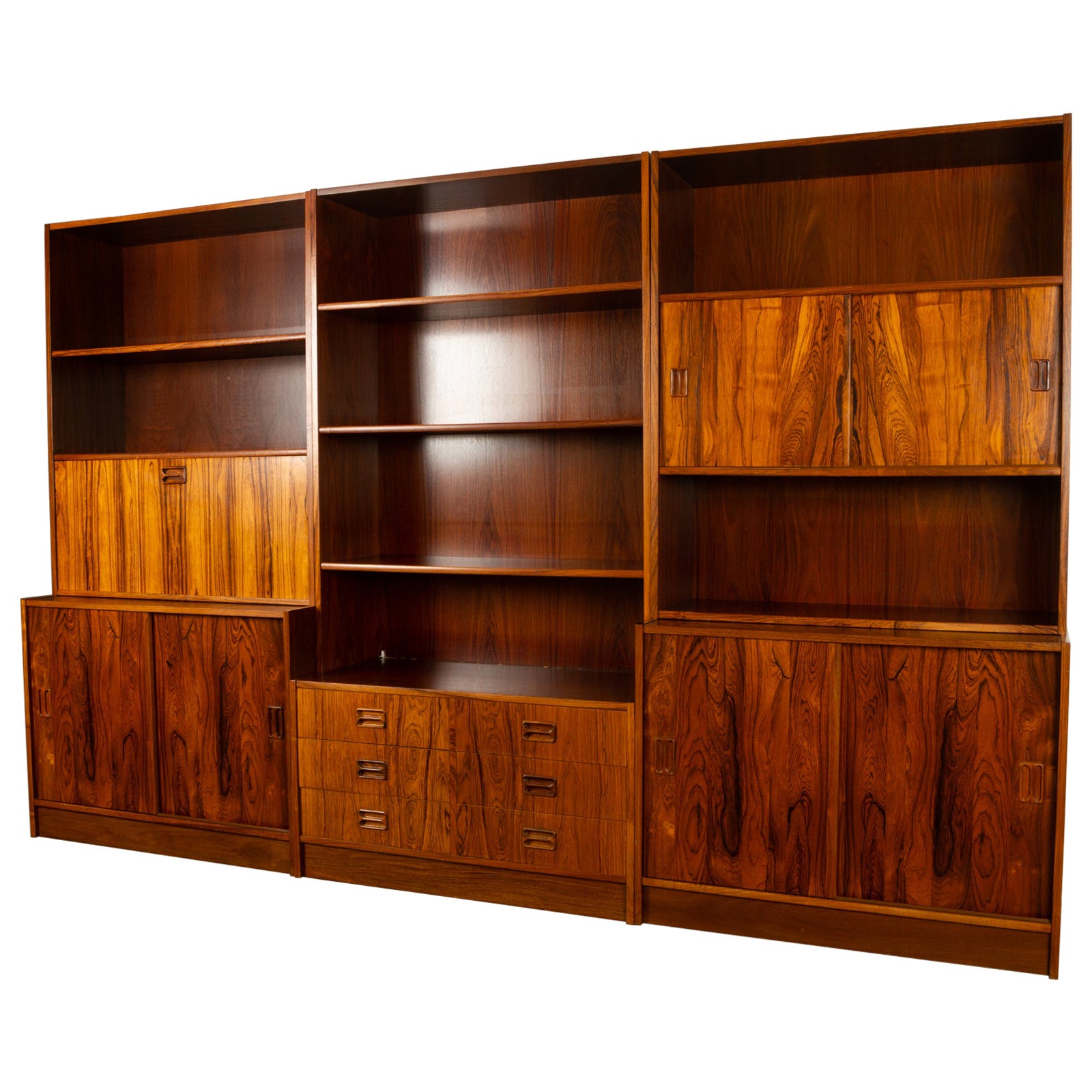 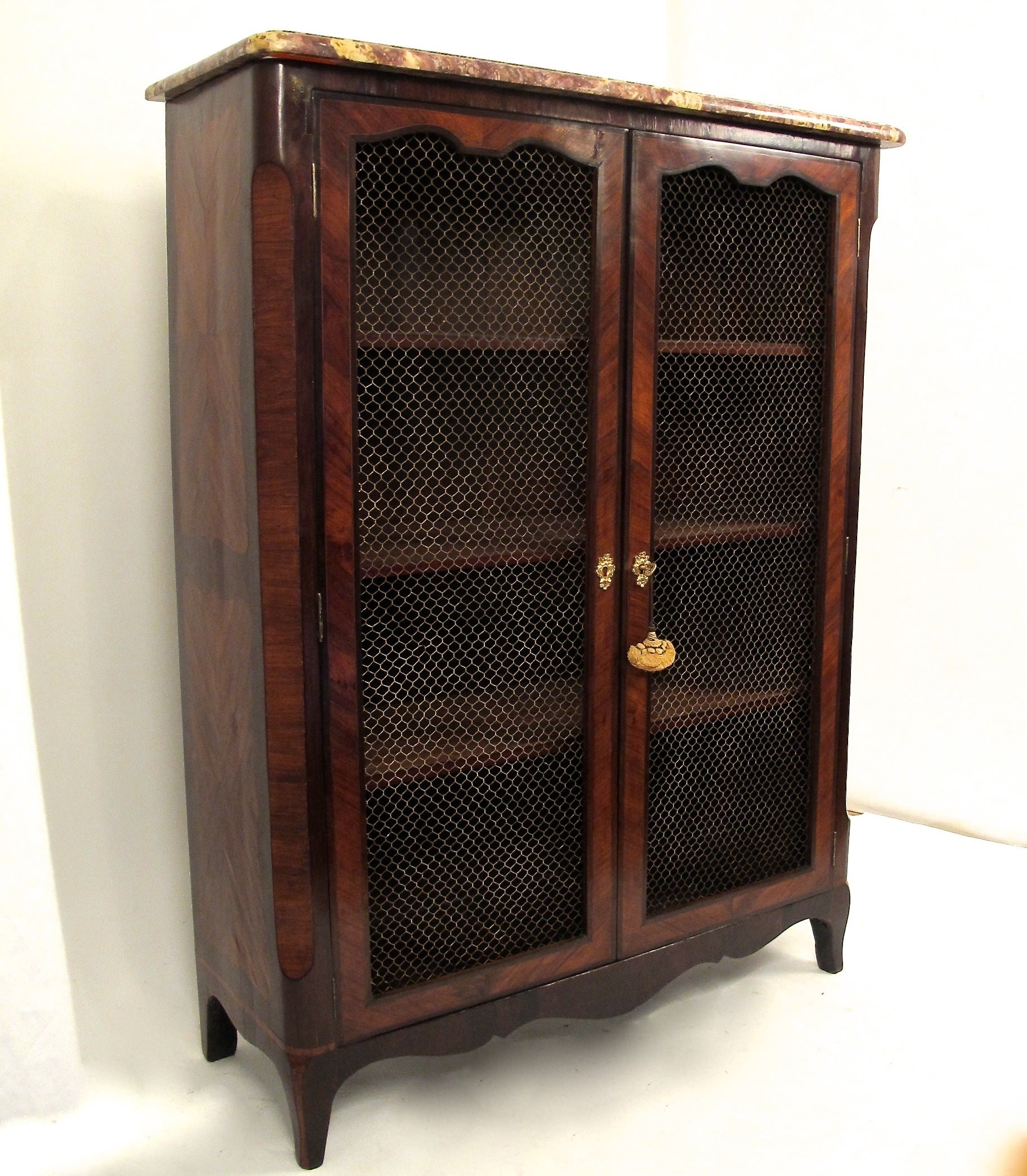 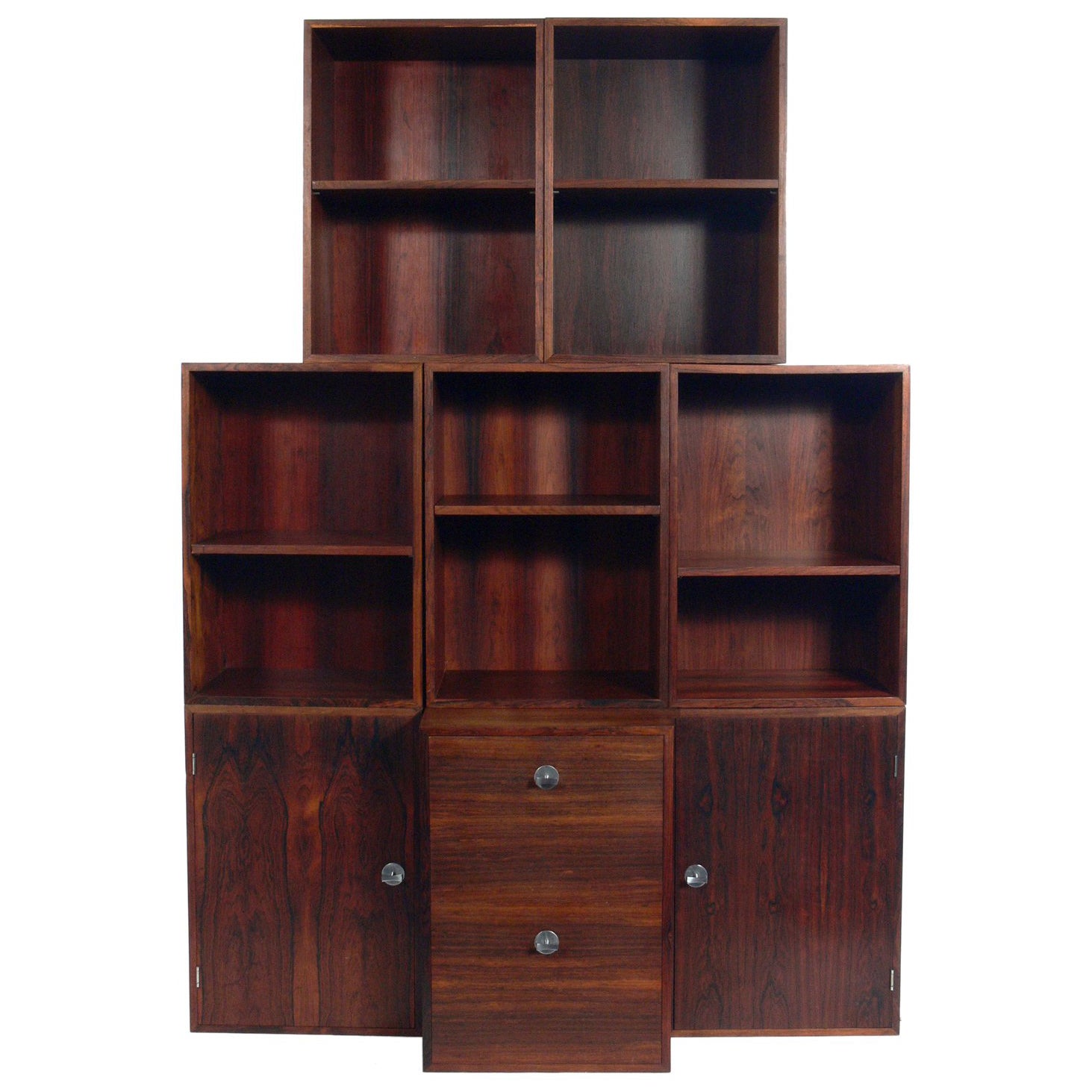 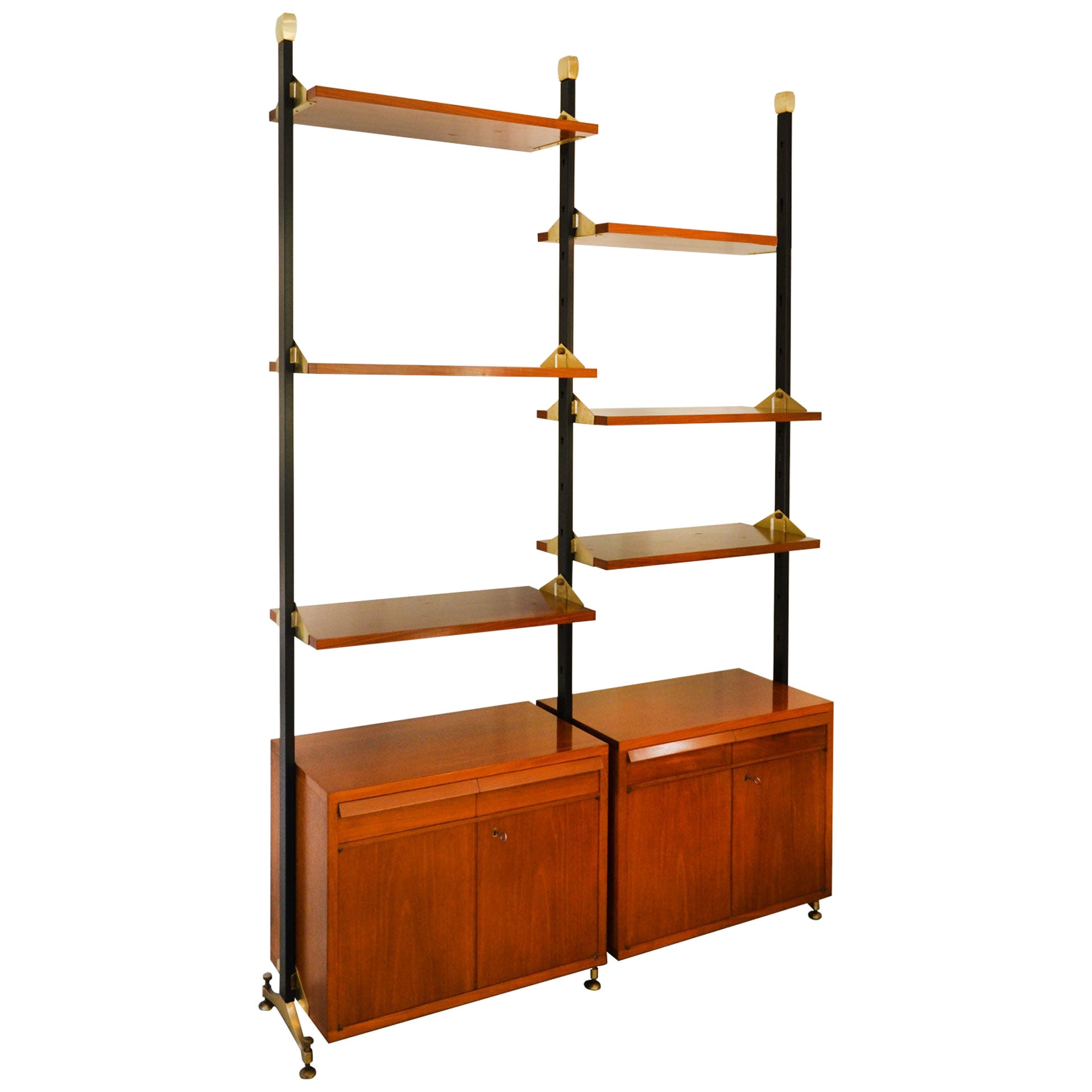 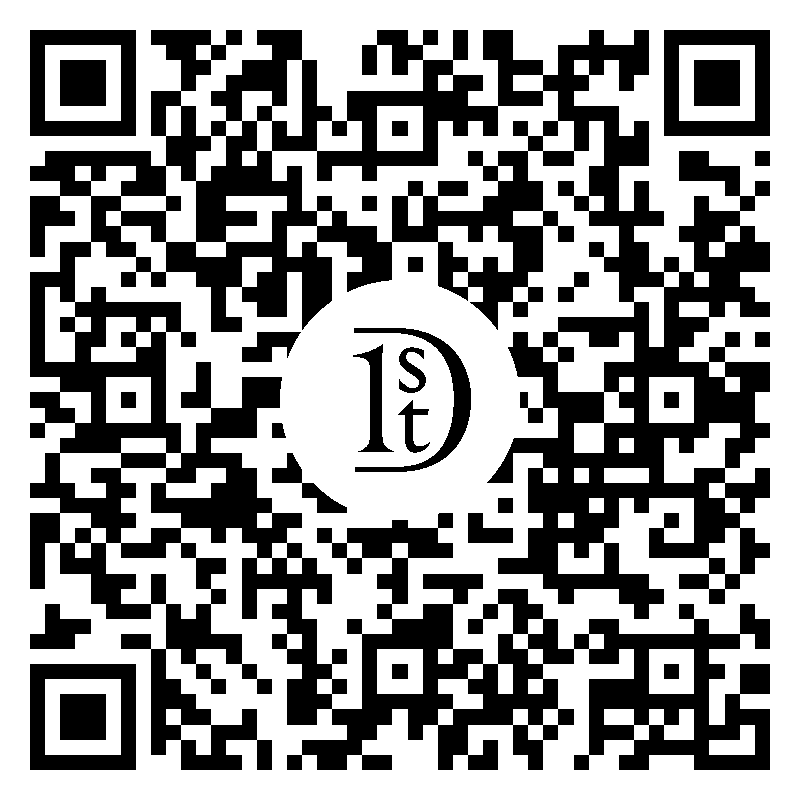 Jules Wabbes for Mobilier Universel, bookcase, in brass and rosewood, Belgium, 1960s   Rare wall unit designed by master furniture-maker Jules Wabbes. This exceptional piece could be used as a bookcase infront of a wall or a room divider. The stunning system provides a very open look due to the slim construction while it contains several shelves and closed compartments for storage which makes it a highly versatile item. The three compartments are illuminated. Due the brass strip on the front they will create a marvellous golden glow upon the cabinet. The cabinets are veneered with beautiful rosewood, with black panels on the back. Storage compartments with doors have black coated fronts and are executed in the same luxurious rosewood on the inside, including the shelves. The cabinet is crafted with high attention for details, such as the wooden joints of the compartments.  The brass frame has an all-over patina which contributes to the unique character of this exceptional piece. If admired the brass could easily be restored into shimmering gold colored. Jules Wabbes (1919-1974) was a Belgian furniture designer, architect and professor. He wasn't (as many of his contemporaries) trained as a designer or architect but learned the Craft of designer furniture by sheer necessity. When Wabbes was 24, he opened an antiques shop where some of the furniture was in need of restoration. Therefore, he opened a small workshop where he taught himself how to restore furniture. Alongside restoration he also started to design furniture. His work is aristocratic and modest, and characterised by a sensual use of materials and a clear, almost architectural tectonics. Wabbes developed a line and idiom of its own, averse to the playful and swinging style of many other furniture designs of the postwar period. Wabbes, influenced by American designers such as Edward Wormley, chose to build his furniture with solid wood giving his designs not only a luxurious appearance but also honest, timeless and sophisticated aesthetics. VAT within the EU: When buying or delivering an item within the EU, VAT usually applies and will be added.

Recognized Seller
These prestigious sellers are industry leaders and represent the highest echelon for item quality and design.
Diamond Seller
These expertly vetted sellers are 1stDibs' most experienced sellers and are rated highest by our customers.
Established in 2006
1stDibs seller since 2012
3,207 sales on 1stDibs
Typical response time: 1 hour
Associations
20th Century Specialists
More From This Seller
View All From Seller

Pair of Cabinets by Jules Wabbes

$4,800
Finn Juhl Rosewood Modular Bookcase System
By Finn Juhl
Located in Atlanta, GA
Rosewood "Diplomat" model modular bookcase system, designed by Finn Juhl for France and Sons, Denmark, circa 1960s. This set is extremely versatile and can be laid out any way you li...
Category