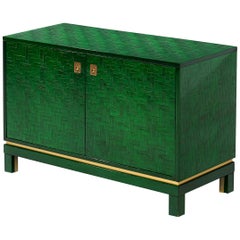 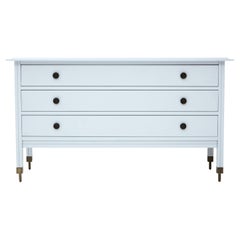 Commodes and Chests of Drawers 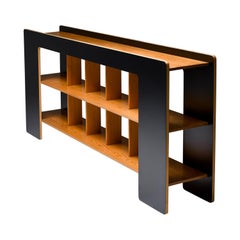 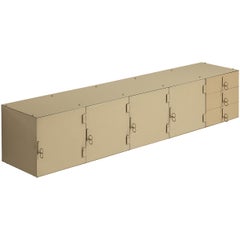 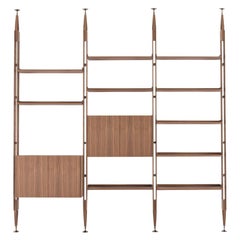 Post-Modern Sideboard with Shelves by Pamio and Toso

Italian Coat Rack with Mirror in Teak by Fiarm, 1960s

Large Italian Sideboard in Walnut with Leather and Brass

Antique 17th Century Oak Charles II Chest of Drawers with Geometric Moulding
Located in Casteren, NL
A beautiful chest of drawers made in the finest quality summer oak. The pared-down geometric mouldings are typical for a 17th century Charles II chest. The top is made from two piece...
Category

Chinese Two-Toned Early 20th Century Cabinet with Carved Apron and Inner Drawers
Located in Yonkers, NY
A Chinese dark wood cabinet from the early 20th century with two-toned panels and carved apron. Created in China during the early years of the 20th century, this cabinet features a l...
Category

RIMA Credenza, Walnut Wood
By Caterina Moretti
Located in Zapopan, Jalisco
Between the sculpture and the functionality of the object, the RIMA credenza is inspired by the dynamism and the cadence of a poem, drawing all the attention to the wooden slats that...
Category

Vintage Retro Rosewood Sideboard Round Handles Tom Robertson for McIntosh, 1960s
By A.H. MacIntosh & Company, Tom Robertson
Located in Cowthorpe, North Yorkshire
Vintage 1960s McIntosh rosewood sideboard by Tom Robertson for Mcintosh, this is one of the best ones around! It has three drawers, cupboard space with lovely round handles, and a dr...
Category

'Athena' Credenza in Natural Brazilian Woodwork
By Alessandra Delgado
Located in Sao Paulo, Sao Paulo
Inspired by the sun blocks or brises soleil featured on Modernist architecture which has captivated Alessandra Delgado since the early days of her career as a designer, Athena creden...
Category

French Art Deco Macassar Ebony and Marble Sideboard
Located in North York, ON
This Art Deco style sideboard is a truly luxurious piece. It sits atop a sloped, plinth base with the original black marble top and creamy brown veining throughout. It has been retro...
Category

Serpentine Front Buffet in Burl Walnut
By Gregory Clark
Located in Wilton, CT
This serpentine curved front sever/sideboard boasts bookmatched burl walnut veneer with pewter pulls. It is a custom one of a kind piece.
Category

Modern Pediment Cabinet in Scrubbed Oak on Metal by Martin and Brockett, Brown
Located in Los Angeles, CA
The Martin & Brockett Frieze cabinet is a two-door cabinet with an architectural pediment and base detail in scrubbed oak. It rests upon a modern white powder-coated pedestal. The ca...
Category

Modern Pediment Cabinet in Scrubbed Oak on Metal by Martin and Brockett, Brown

Credenza M04 Contemporary Cabinet Lacquer White Oak Marble Counter Made in Italy
By 2K1M
Located in Toronto, CA
This elegant and unique crafted Credenza, Made in Italy and designed by Naji Mourani, will complement your environment and fit-in your living, dining spaces. In a Hotel Room, a lobby...
Category

Antique French Bonnetiere or Petite Armoire or Cabinet in Original Condition
Located in Chicago, IL
Louis XIII, 27 September 1601 to 14 May 1643 was King of France from 1610-1643. Henry IV was assassinated in 1610, his successor Louis XIII, was too young to take control, so it was ...
Category

Mid Century Italian Wall Unit / Shelving System / Shelf in Teak and Metal, 1950s
Located in Berlin, DE
This beautiful mid century Italian wall unit or shelving system was designed and made in Italy, around 1950. It is made out of teak and black lacquered metal. The corpora are beauti...
Category

Connect Bookcase or Shelf Customizable in Blackened Steel and Polished Bronze
By New Format Studio, Henry Norris
Located in Vancouver, BC
The Connect Bookcase is emblematic of the contemporary interweaving of mass manufacturing and traditional joinery technique. Construction and fastening details remain as evidence of ...
Category

Louis XVI Marble Top Commode
Located in La Plata, MD
A handsome period Louis XVI commode from the later half of the 18th century. Heavy use of marquetry and parquetry inlays using tulipwood, kingwood and rosewood throughout the sides a...
Category

Nº177 Grand Cupboard by Avoirdupois - A wood credenza with brass hardware
By Avoirdupois
Located in New York, NY
The Nº177 grand cupboard is a credenza composed of six domus doors sweeping in size with a simple arch running the length of its base. Collection Nº1 / Tripartite is the visual divis...
Category

Antique 19th century Baroque Spanish Desk ‘Bargueño’ in solid walnut
Located in Casteren, NL
This beautiful Spanish baroque desk (bargueno) is made in solid walnut wood and was made around 1880. This typical Spanish desk with drop down front has been decorated with many bras...
Category

Dressers, credenzas and cabinets have long been home staples, perfect for routine storage or protection of personal items.

In the mid-19th century, cabinetmakers would mimic styles originating in the Louis XIV, Louis XV and Louis XVI eras for their dressers, bookshelves and other structures, and, later, simpler, streamlined wood designs allowed these “case pieces” or “case goods” — any furnishing that is unupholstered and has some semblance of a storage component — to blend into the background of any interior.

Mid-century modern furniture enthusiasts will cite the tall modular wall units crafted in teak and other sought-after woods of the era by the likes of George Nelson and Finn Juhl. For these highly customizable furnishings, designers of the day delivered an alternative to big, heavy bookcases by considering the use of space — and, in particular, walls — in new and innovative ways. Mid-century modern credenzas, which, long and low, evolved from tables that were built as early as the 14th century in Italy, typically have no legs or very short legs and have grown in popularity as an alluring storage option over time.

Although the name immediately invokes images of clothing, dressers were initially created in Europe for a much different purpose. This furnishing was initially a flat-surfaced, low-profile side table equipped with a few drawers — a common fixture used to dress and prepare meats in English kitchens throughout the Tudor period. The drawers served as perfect utensil storage. It wasn’t until the design made its way to North America that it became enlarged and equipped with enough space to hold clothing and cosmetics. The very history of storage case pieces is a testament to their versatility and well-earned place in any room.

In the spirit of positioning your case goods center stage, decluttering can now be design-minded. A contemporary case piece with open shelving and painted wood details can prove functional as a storage unit as easily as it can a room divider. Whether you’re seeking a playful sideboard made of colored glass and metals, an antique Italian hand-carved storage cabinet or a glass-door vitrine to store and show off your collectibles, there are options for you on 1stDibs.

28 Cheerful Home Bars, Where Everybody (Literally) Knows Your Name

Leaping into a design project, whether it's refreshing the bedroom or redoing the whole house, can be overwhelming. Luckily, we know more than a few interior designers. You asked questions on Instagram, and now they're answering.