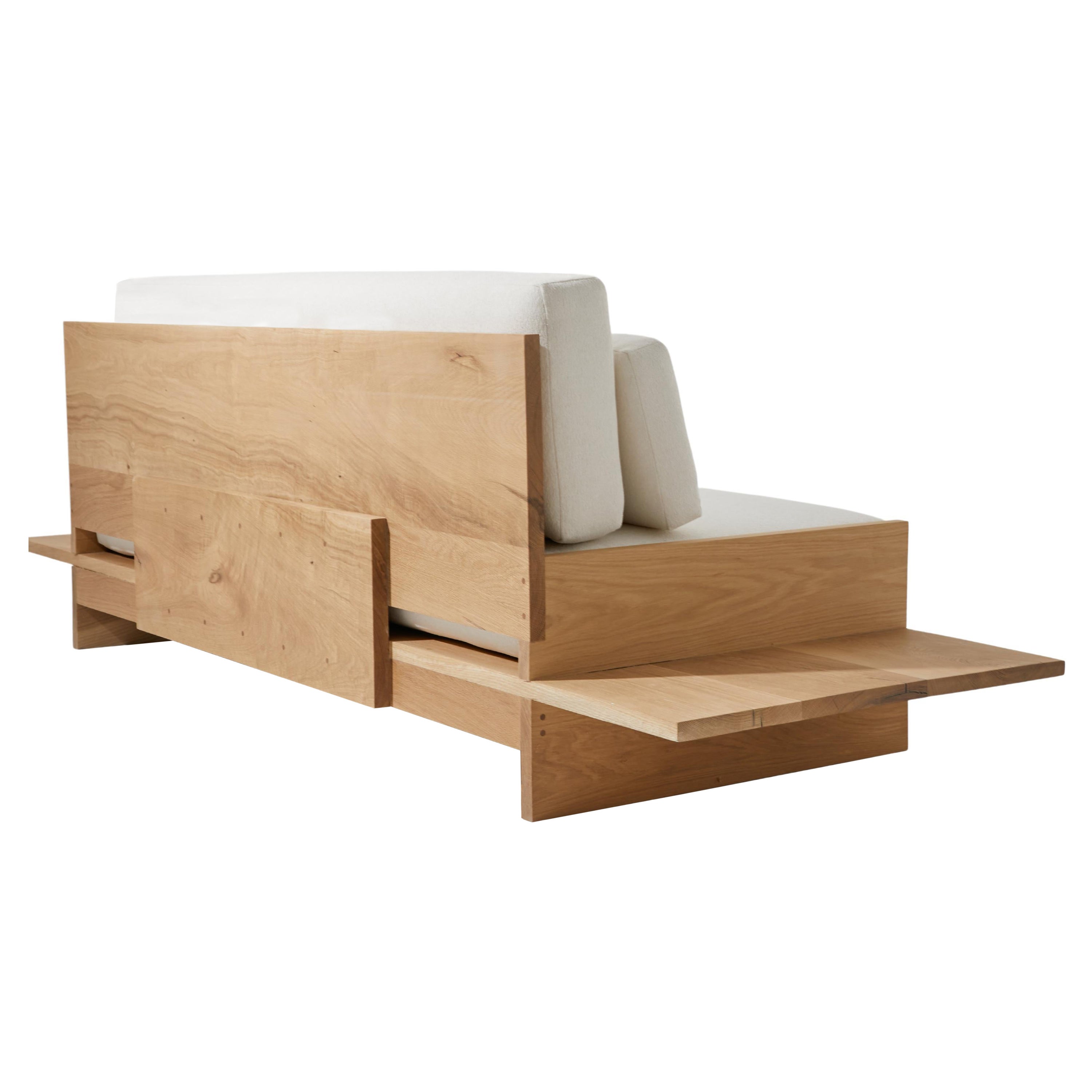 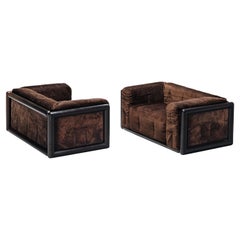 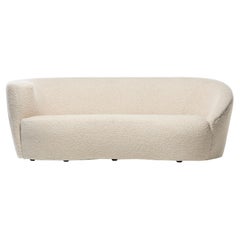 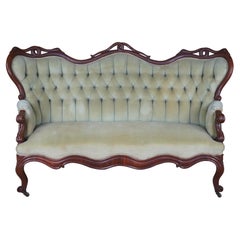 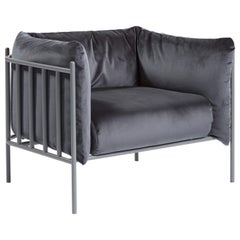 Pair of Antique Carved Walnut English Settees
Located in Bridgeport, CT
Ca. 1910. With a camel back and carved arms with acanthus leaves. Raised on a finely carved base with square tapering legs and carved serpentine stretchers. The long middle stretcher...
Category

Channeled Back Armless Settee with Back Stretchers and Solid Seat on Wood Legs
By LF Upholstery
Located in Brooklyn, NY
The Elliot sofa is all hand carved with channeled back and solid channeled seat. It is shown in light fabric and can be made custom to your specifications including size and finish. ...
Category

Mid Century Velvet and Walnut Wooden Bench with Backrest by Guglielmo Ulrich
By Guglielmo Ulrich
Located in Milano, IT
Fantastic wooden back bench designed by the great Italian architect Guglielmo Ulrich in the 1950s. The very pretty bench was made of Fine walnut wood and can also serve as a small s...
Category

Tete-a-Tete Option Love Seat Sofa by Ransom Culler for Thayer Coggin
By Ransom Culler
Located in Chicago, IL
Clever functional design. One of the back rests swivels (on a wheel) to function as either a settee or a tete-a-tete. Please refer to photos for different configurations. Thayer Cogg...
Category

1970s Vintage Modern Sleeper Sofa
By Milo Baughman
Located in Farmington Hills, MI
We are very pleased to offer a chic sleeper sofa circa the 1970s. This piece showcases a clean modern silhouette, its back and side pillows and overall enveloping frame is the perfec...
Category

Beige Fiberglass Two-Seat Sofa
Located in Pasadena, TX
A Mid-Century Modern beige fiberglass two-seat sofa or love seat. We have 4 of these available. As shown in the last image, we have other similar fiberglass pieces listed on 1std...
Category

Midcentury Porch or Sun Room Upholstered Loveseat
Located in Great Barrington, MA
The faux bamboo or rattan love seat is designed for the enclosed porch or sun room. The raffia rapped poles are newly painted white and the new cushions are covered in beige and taup...
Category

Japan Three-Seat Sofa Designed by Finn Juhl in 1957 Made by France & Son.

1970s Danish Modern Teak Loveseat
Located in High Point, NC
This two-seat teak sofa was manufactured in Denmark, circa 1970. In this elegantly composed design, soft cushions rests on a dynamic bent hardwood frame. A contrast of textures and c...
Category

Danish 1860s Rococo Revival Settee or Loveseat in Carved Mahogany
Located in Ridgefield, CT
Elegant Rococo Revival style settee made from carved mahogany and made in Denmark around the 1860s. Sturdy and comfortable with only minor nicks and dents to the wooden frame and leg...
Category

Dutch Upholstered Leather Sofa or Settee in the Art Deco Style
Located in Austin, TX
A fine Dutch upholstered sofa or loveseat (settee) in the Art Deco style, featuring an elegant design of rounded back, rolled arms, and two cushions - the whole with black piping and...
Category

Soy Una Roca, Sculptural Concrete Seat by OPIARY
Located in Brooklyn, NY
Opiary is a Brooklyn-based biophilic design and production studio. We integrate nature in each of our designs, incorporating live greenery and organic shapes into bespoke furniture, ...
Category

Vladimir Kagan Contour Loveseat and Footstool in Tan Leather with Natural Walnut
By Vladimir Kagan
Located in Clifton, NJ
Resisting the move to ‘modern’ hard angles in the 1950s, the Kagan Contour series is iconic among midcentury designs for its emphasis on natural materials and hand craftsmanship. The...
Category

Mid-Century Modern Italian Damask Velvet Corner Sofa, 1950s
Located in Cerignola, Puglia
Original Italian corner sofa from the 1950s, the upholstery is from the time, in damask velvet, in good condition but the intervention of the upholsterer is recommended.
Category

Scandinavian Modern Vintage Slipper Settee by Ib Kofod-Larsen
By Ib Kofod-Larsen
Located in Minneapolis, MN
This dainty settee has a tailored look that would add style and character to a variety of spaces. Fabric is not original to the piece but is in good useable condition. We'd be happy ...
Category

Loveseat in Cream Shagreen with Velvet Upholstery and Brass by R&Y Augousti
By R & Y Augousti
Located in New York, NY
The limited edition Victoria loveseat by R&Y Augousti is a sophisticated piece that provides comfort, whilst retaining its elegant and luxurious aesthetic. The backrest of this piece...
Category

Mixed-Media Upholstered Wood and Metal Bench
By Gregory Clark
Located in Wilton, CT
The Emily bench, mixed-media upholstered wood and metal This bench in mixed-media was named after the designer's daughter. Shown in walnut, blackened steel and silver metallic and...
Category

Gervasoni Ghost 09 Love Seat in White Linen Upholstery by Paola Navone
By Paola Navone
Located in Brooklyn, NY
The armchairs of the Ghost family have backrests with different heights and seats of various sizes, have a thin, minimal structure padded with polyurethane foam and loose cushions in...
Category

Solid Acacia Wood Gustavian Swedish Style Window Bench Settee with Cushion
Located in Swedesboro, NJ
This is a hand carved solid acacia that was made to look like an antique Gustavian settee. The piece has some imperfections and flaws that add to the character of the piece and a cus...
Category

Midcentury Modern Two Seat Bench
Located in Los Angeles, CA
A Vintage Mid-Century Modern loveseat in good condition that is handcrafted out of rosewood and has been newly restored. This two seating bench features a newly lacquered wood finish...
Category

Midcentury Macassar and Brass Italian Pouf, 1960
Located in Rome, IT
Elegant and particular design for this pouf, narrow and long, due the use of not common materials. All veneered in Macassar wood, and bordered all around by a brass rods. Particular...
Category

Artifort Ondo Sofa in Purple by René Holten
By Artifort, Rene Holten
Located in New York, NY
Rising from the arm, the seat and back fuse together into the other arm. Simple principles provide the best design for a comfortable sofa. A sparse supporting frame allows the seat a...
Category

Custom-Made by the Somerset House Loveseat Sofa
Located in Brooklyn, NY
This custom-made by The Somerset House olive loveseat sofa features rounded arms and a low back. It is modern yet elegant and supremely soft. Fits 2-3 comfortably.
Category

Antique French Fireside Seat, One End Drawer
Located in Port Chester, NY
A very nice, rustic, sturdy bench, often found near the fireside, to hold wood or kindling. In this case, the storage area is a pull-out drawer on one side. Terrific deep color and p...
Category

Amura 'Ease' Chair in Light Brown Leather by Gareth Neal
By Amura
Located in GRUMO APPULA (BA), IT
Ease unequivocally shows the great attention Amura has to both research and the experimentation of shape, material, and craftsmanship. Using natural materials like leather and wood c...
Category

Stool Fruitwood Treen Heart Love Minature Folk Vernacular Commemorative Child's
Located in Eversholt, Bedfordshire
- Charming piece of folk, vernacular, country furniture oozing character. - It was most likely intended as a love token or to commemorate a child as there is not much wear on the un...
Category

Bride's Veil Love Seat
By Phase Design
Located in Los Angeles, CA
The Bride’s Veil lounge chair and Love’s unique language is meant as a graceful alternative to the archetypal upholstered armchair. The strikingly elegant metal base is available in ...
Category

Antique and vintage loveseats are functional and totally charming furniture in homes large and small these days. They first appeared in the 17th and 18th centuries, though they were not yet known by this endearing term.

These petite, two-seat sofas were originally intended to comfortably sit a woman clad in what were the era’s large and elaborate dresses — ornate hooped garments with copious folds of fabric, embroidery and lace. However, because the original seats featured just enough space for two, they quickly became popular for couples that were courting. Loveseats meant that the couples could engage in close conversation, but furniture makers ensured that there was enough space between sitters to prioritize modesty.

In the early days of loveseats, the furnishings were minimalist in appearance and could often be found in an s-shape, with the two sides facing each other. The spare seating was initially little more than a wooden bench, as loveseats weren’t yet upholstered or cushioned. Design of the seating evolved over time, and this wide chair was eventually padded and tufted for comfort. During the 1800s, loveseats were a luxurious addition to the homes of the wealthy, and even today, antique 19th-century loveseats are still quite alluring. In any lavishly decorated parlor of the Victorian era, you might find a pair of partygoers tucked into a particularly plush iteration of these cozy perches, one boasting arched crests of carved mahogany over its sculpted seats, with front cabriole legs resolving in paw feet.

In modern homes, loveseats — even antique Victorian loveseats — pair well with oversize sofas or are ideal replacements for sofas, particularly if you’re working on organizing and furnishing a smaller space. A loveseat is a stylish addition to a home library or a reading nook and can easily be situated at the foot of the bed in your bedroom. In the living room, you may wish to position your vintage loveseat and couch around a central focal point, such as a distinguishing architectural feature or a fireplace. But be sure to leave some walking room between your seating and any nearby coffee tables or side tables. Allow for around two feet for guests to pass between a couch and chair or loveseat and at least a foot between a loveseat and coffee table.

Find a wide variety of antique, new and vintage loveseats today on 1stDibs.