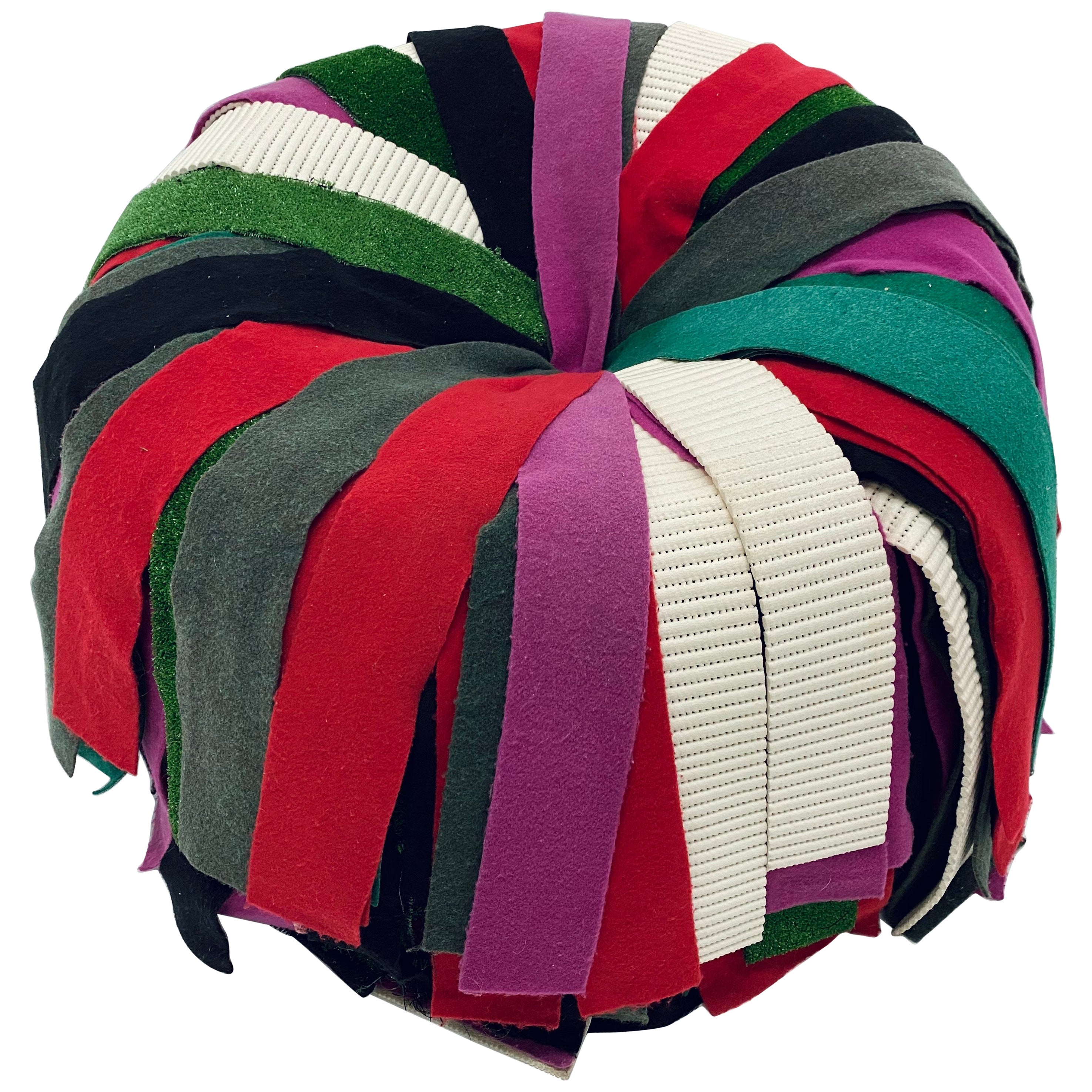 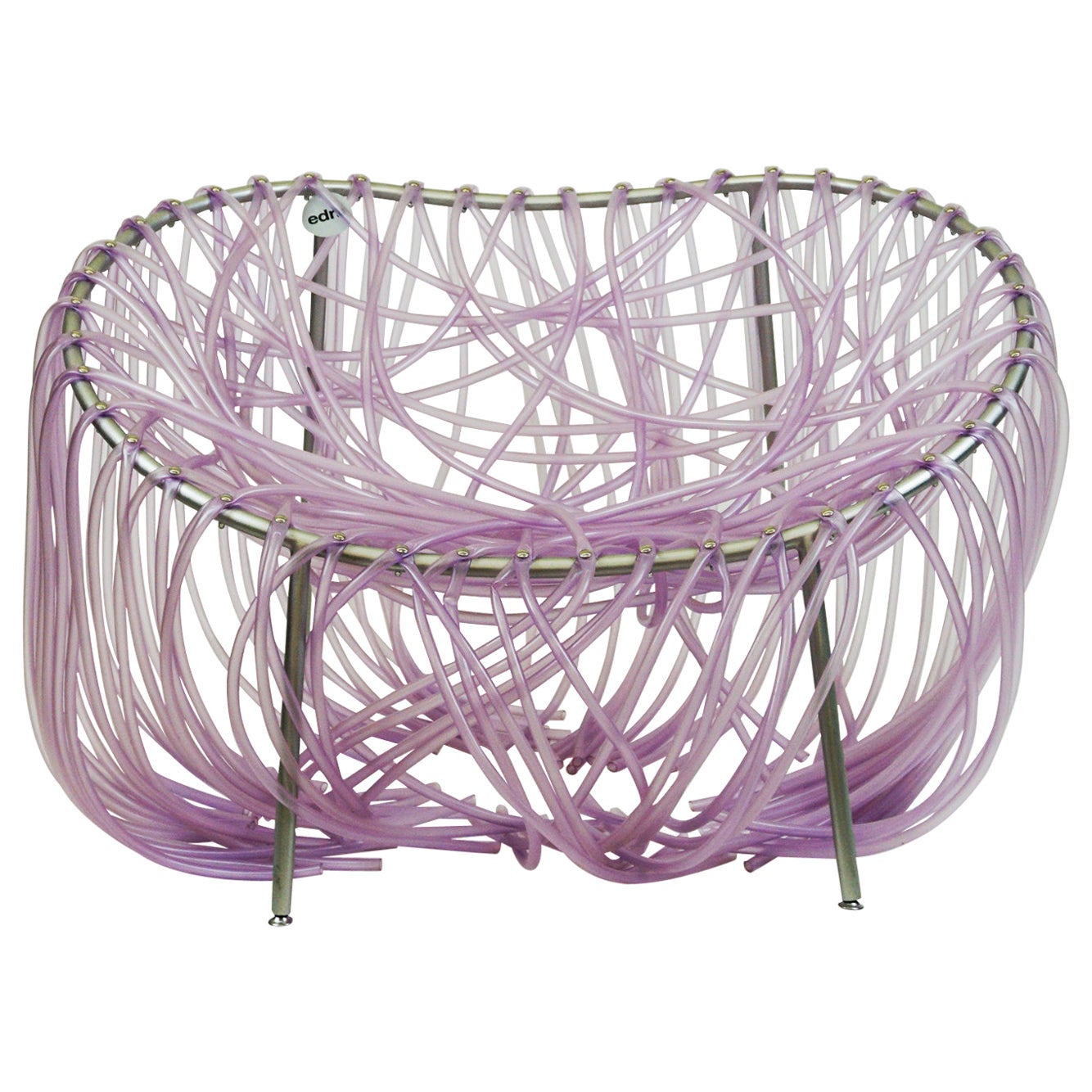 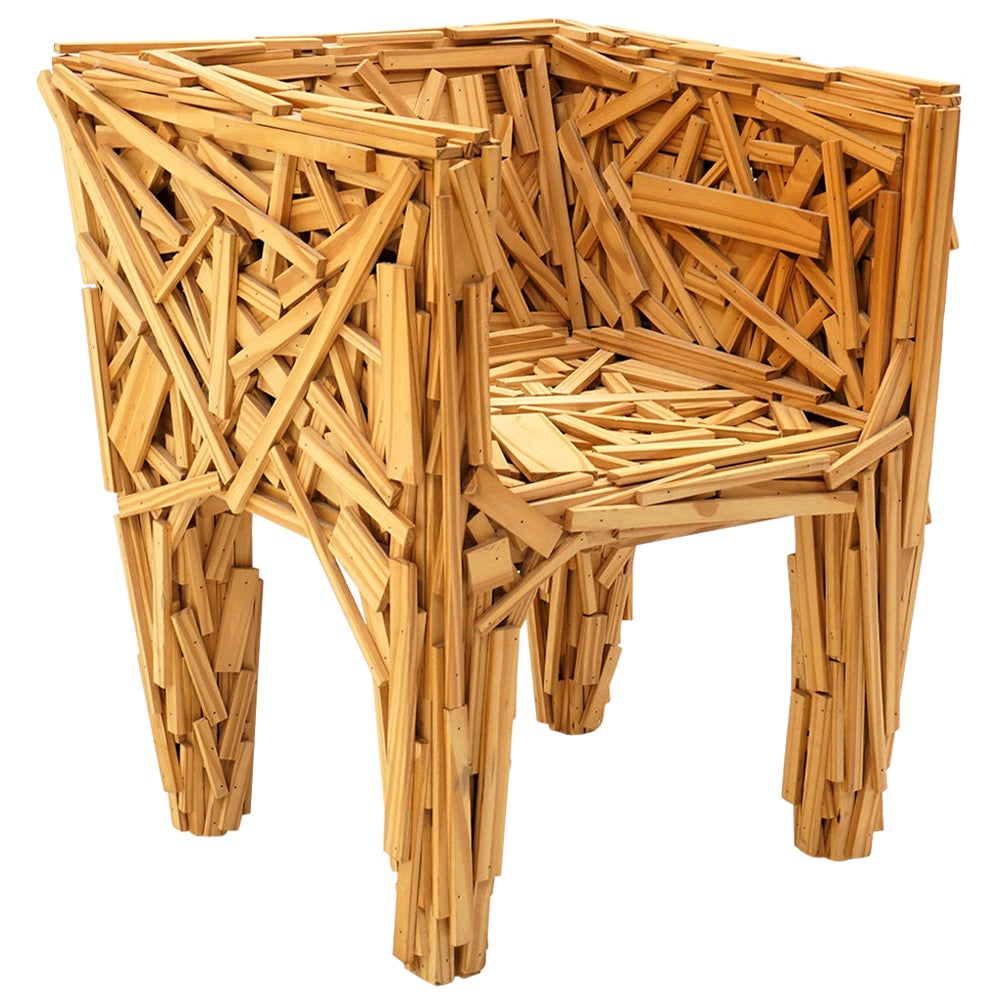 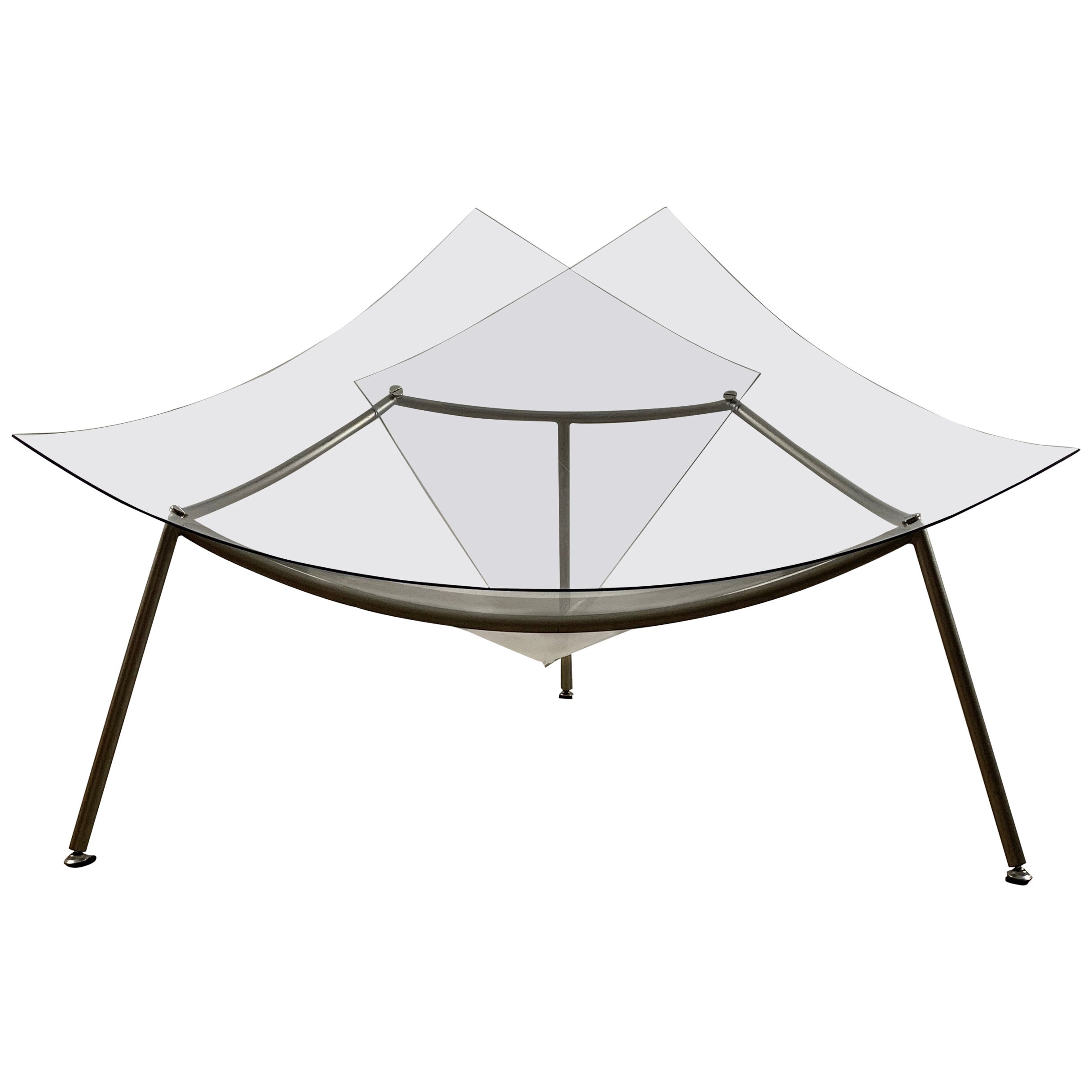 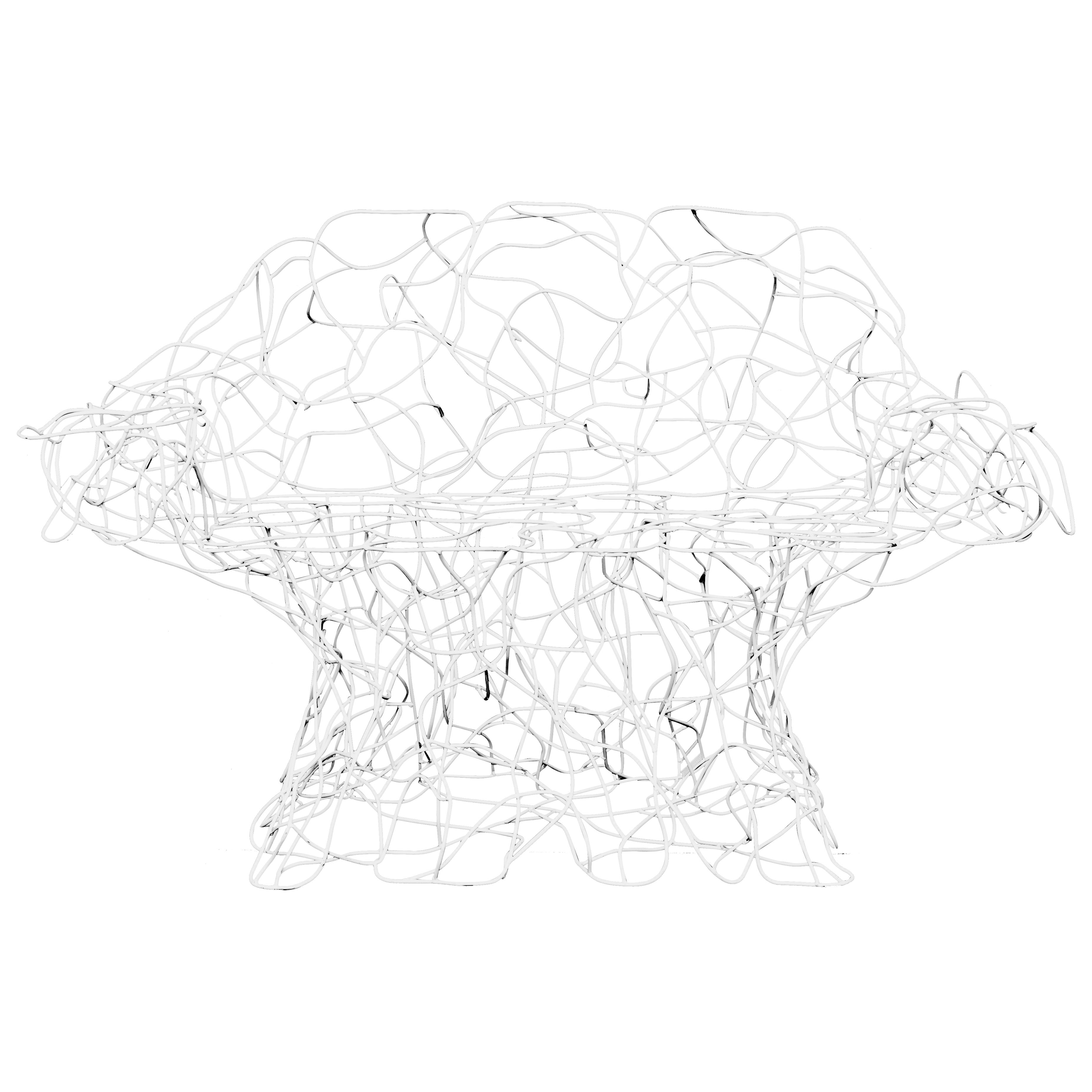 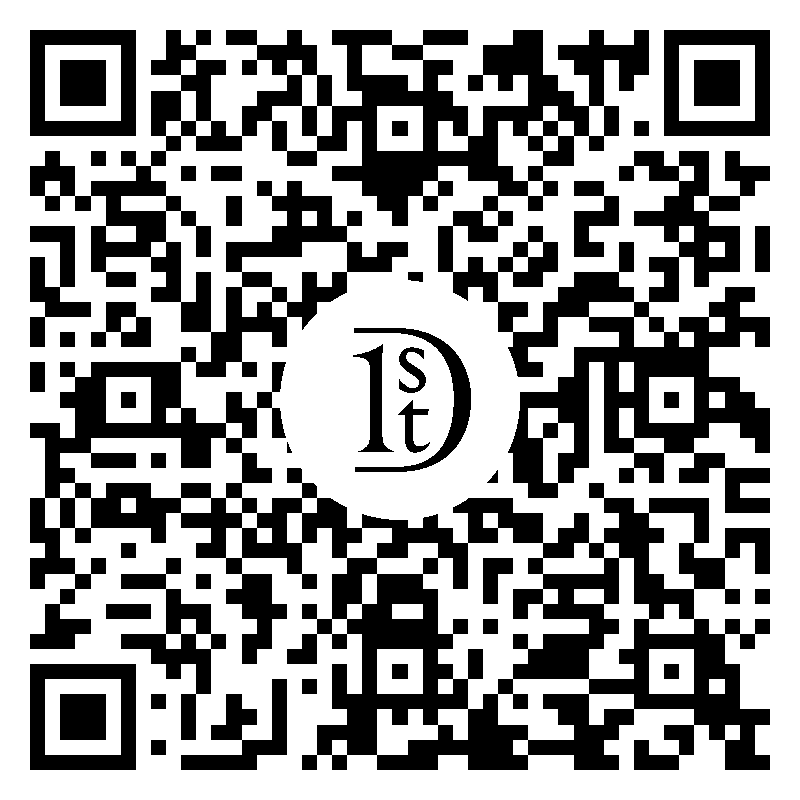 Fernando and Humberto Campana Anemone chair manufactured by Edra. Brazil/Italy, 2001. Special hollow tubes in plastic are handwoven methodically and screw-attached to the corolla-shaped frame in moulded metal, sanded and coated a metallic grey color. The weave, which may seem random, forms a comfortable and attractive seat. This example is what we would call excellent condition. It is obvious that it has hardly been used. However, 1st dibs ratings consider excellent to be perfect so on their scale you'll see good.

About Fernando and Humberto Campana (Designer)

Humberto and Fernando Campana are among Brazil’s foremost contemporary furniture designers. Inspired by their country’s vernacular culture, the brothers combine everyday objects in unexpected ways, often waste materials like rope, cardboard, plastic tubing, and aluminum wire, to make their singular creations. Their designs has been manufactured by such companies as Alessi, Swarovski and Cappellini. And they have received numerous honors, including being named Designer of the Year both at Design Miami in 2008, and by Maison & Objet in Paris in 2012.


Humberto Campana was born in Rio Claro in 1953 and earned a bachelor’s degree in law from the University of São Paulo. Fernando was born in 1961 in Brotas, and graduated from the São Paulo School of Fine Arts with a bachelor’s degree in architecture. The brothers started working together in 1983, crafting furniture using their signature method of adaptive reuse. Their pieces frequently refer to Brazilian social and cultural traditions and entities. Among these are the country’s favelas, or shantytowns, that have grown up around major cities. An homage to the resourcefulness with which the residents of São Paulo’s favelas make use of the materials at hand, repurposing cast-off objects in ingenious designs and constructions, their Favela Armchair is made of cast-off strips of wood (the first one was made from discarded slats from a fruit market), which are glued and nailed together seemingly at random. The end result, however, is a compact, solid and well-proportioned chair.


By 1997, some of the Campanas’ pieces were being produced and sold in Italy. including the Edra Vermelha Armchair, constructed of cord handwoven around a steel frame. In 1998, the brothers became the first Brazilian designers to have their work exhibited at the Museum of Modern Art in New York. Today their furniture is included MoMA’s permanent collection and in those of numerous other major institutions, such as the Metropolitan Museum of Art, the Philadelphia Museum of Art, and the Vitra Design Museum.

About the Seller
5 / 5
Located in Kansas City, MO
Platinum Seller
These expertly vetted sellers are 1stDibs' most experienced sellers and are rated highest by our customers.
Established in 1998
1stDibs seller since 2014
354 sales on 1stDibs
Typical response time: <1 hour
More From This Seller
View All From Seller

$5,939
Fernando and Humberto Campana Corallo Sofa
By Edra, Campana Brothers
Located in Tuscany, IT
A sofa is by the Campana Brothers from irregular weave of stainless steel wire and painted with a with color epoxy paint. Each piece of wire has been bent and soldered by hand and th...
Category

$9,279
21st Century Fernando & Humberto Campana Black Jenette Chair, Edra 2005
Located in CH
Jenette is a moulded chair made of rigid structural polyurethane, and with a metallic core. Its backrest is covered in about 900 flexible stalks made of rigid PVC. Fernando (born 19...
Category