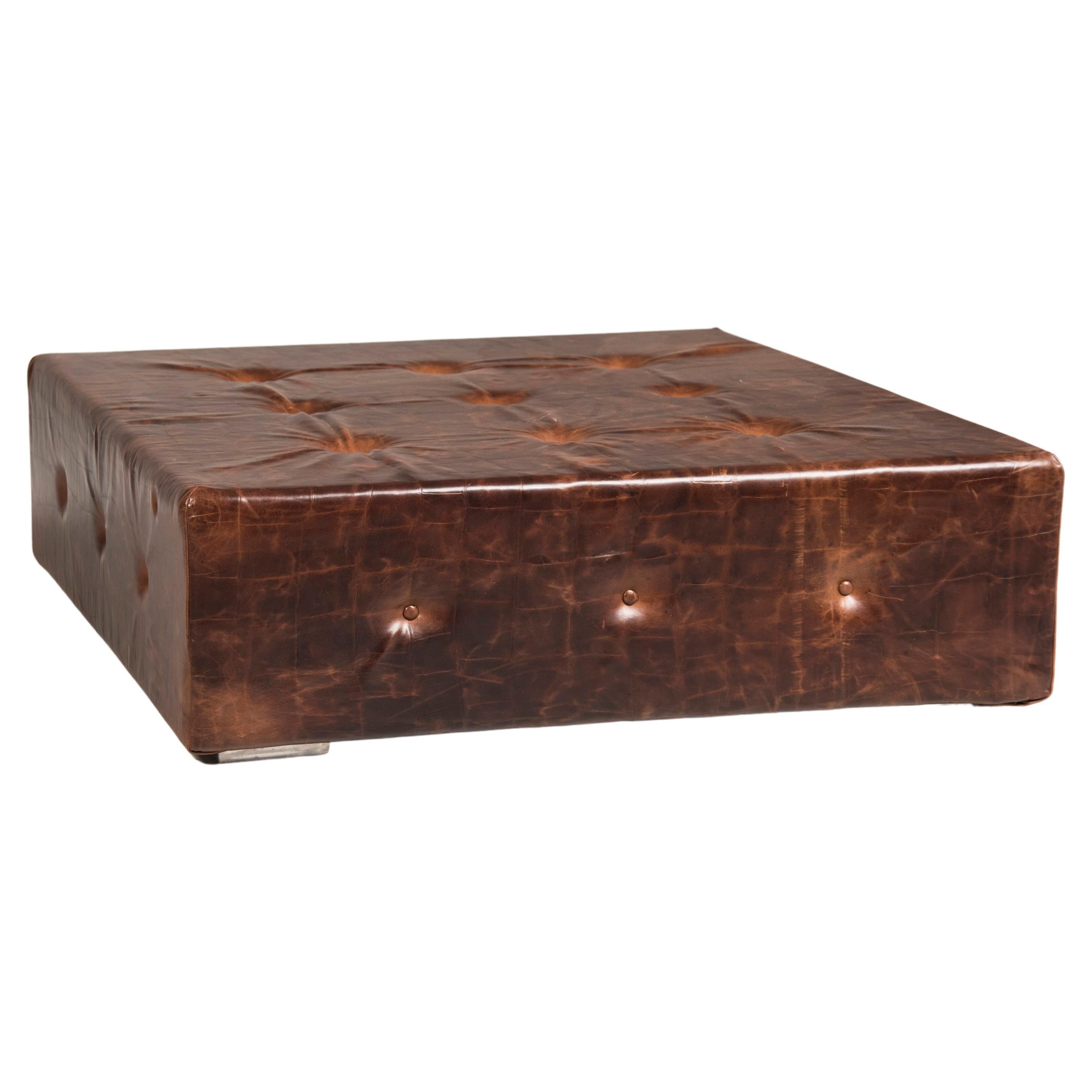 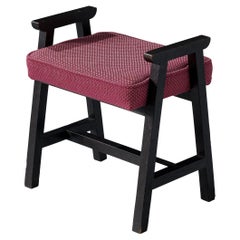 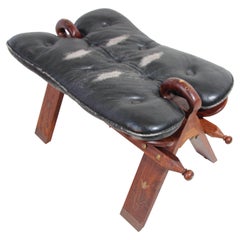 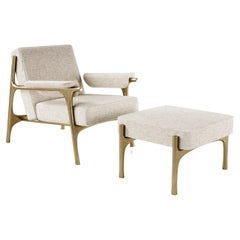 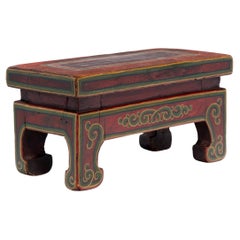 Upholstered Bench with Brown Horsehair Seat with Mahogany Frame and Tapered Legs
By LF Upholstery
Located in Brooklyn, NY
The Denton bench made by LF Upholstery is shown with brown and taupe patterned horsehair with soft foam padding. It has a hand carved mahogany wood and finished frame with tapered le...
Category

Pr. Bentwood Thonet Ottoman Stools
By Thonet
Located in New York, NY
Pair of iconic Thonet bentwood and caned stools, by Thonet. Unusual to find these as in pairs, both are in good original condition showing only light cosmetic wear normal and consist...
Category

Etro Home Interiors Goa Poufs in Leather and Red Paisley
By Etro
Located in Cantu, IT
An emblematic embrace between two different elements: the paisley-shape and the oval components in different materials meet to create infinite compositions. Oval pouf in nubuk leath...
Category

Eero Aarnio Black Poly-Rattan Elephant Boot Chair
By Eero Aarnio
Located in New York, NY
The elephant boot was designed by Eero Aarnio in 1961 and it is the largest piece of the Rattan collection. The functionality and neutral aesthetic make it a perfect addition to any ...
Category

Etro Home Interiors Mini Pouf in Jacquard Zulu
By Etro
Located in Cantu, IT
The Mini pouf features a light and versatile design. Small, soft and compact, it adds character to any setting. Pouf with structure in wood and foam. Upholstery in ZULU COL. 1 TO...
Category

Eero Aarnio Large Black Rattan Mushroom
By Eero Aarnio
Located in New York, NY
The Rattan Mushroom was the very first stool made by the Finnish innovator, and his first commercial success. The Mushroom is a multifunctional furniture piece, as it works both as a...
Category

Eero Aarnio Small Natural Rattan Mushroom
By Eero Aarnio
Located in New York, NY
The Rattan Mushroom was the very first stool made by the Finnish innovator, and his first commercial success. The Mushroom is a multifunctional furniture piece, as it works both as a...
Category

Set of Two Camel Boucle Vintage Stools, Edmund Homa, 1960s
Located in 05-080 Hornowek, PL
Stools from the turn of the 1960s. The stools consist of an upholstered part, a seat and wooden legs narrowing downwards, characteristic of the 1960s style. Stools were designed b...
Category

Set of Two-Light Crème Boucle Vintage Stools, Edmund Homa, 1960s
Located in 05-080 Hornowek, PL
Stools from the turn of the 1960s. The stools consist of an upholstered part, a seat and wooden legs narrowing downwards, characteristic of the 1960s style. Stools were designed b...
Category

Pair of Mid-Century Wood Slab Stools
Located in Los Angeles, CA
A pair of unique wood slab footstools crafted out of walnut wood and features a walnut and ebonized color combination with a lacquered finish. The stools have a free-form top sitting...
Category

Antique English Turned Leg String Stool
Located in Port Chester, NY
A sweet little oak string stool for the hallway, living room, child's bedroom, or as a perch next to the fireplace. The turned legs complete the look! Note: there is a small area of ...
Category

Beachcomber Milking Stool in Oiled Walnut
By Greg Mitchell
Located in Los Angeles, CA
The beachcomber milking stool is our take on a Classic, simple form. The hand shaped seat is sculpted for comfort, and the legs are shaved with a block plane lending the walnut a low...
Category

Early 19th Century Country Candle Stand or Stool solid elm, English Circa 1820
Located in Lincoln, Lincolnshire
This candle stand or stool is a good example of English Country furniture. The thick oval top is made of solid elm and has a lower chamfered edge. The legs are also made from elm an...
Category

Wooden Midcentury Stool or Side Table
Located in Surbiton, Surrey
An English stool that is perfect for use as side table given the flat nature of its top. English, circa 1950s. Likely a milking stool used in an farm setting. Flecks of pain...
Category

Wooden Midcentury Stool or Side Table

Antique and vintage footstools might add a dose of fun to your living room, but they’re also hard workers.

Even as they’ve morphed into objects with plenty of functions over time, the footstool has a royal past. In Ancient Egypt, a footstool was used to climb onto an elevated chair or placed under someone’s feet as he or she was seated in a temple or private residence. Footstools were also in use during the Ottoman Empire. In fact, the ottoman, an upholstered seat or small bench that initially had no back or arms, was the main seating furniture in a home. Ottomans were a way to merge floor seating with cushions and mats.

Poufs, which originated in France, are also thought of as convenient seating furniture as well as occasionally serving as a side table, if needed. (Although, a pouf is typically not as firm as an ottoman.)

Over the years, footstools have taken on varying purposes. They have been used as small portable chairs, for example.

During the 18th century, a footstool might have been long with a low profile, which rendered it perfect for fireside seating. Victorian footstools were small but not unassuming, as furniture makers of the era would upholster the pieces so that they paired with the nearby sofa or wingback chairs. Footstools have even become a storage solution at home, with designers outfitting them with compartments. Today, a footstool might be used to organize quilts and blankets or other textiles, especially if you’re trying to keep things uncluttered in a small apartment.

Footstools are now available in all sorts of provocative colors, upholstery and more. No one is going to put a velvet footstool out on the curb, right? When shopping for your own footstool, try to find one that meets the height of your sofa or other seating (or is a tad lower). It should also be sturdy but not a heavy, clunky piece that’s a chore to move around.

The footstool is both decorative and functional. Not unlike a good throw pillow, interior designers have found numerous uses for this versatile, vibrant furnishing. Find yours in the growing collection of antique and vintage footstools today on 1stDibs.

How Designers Use Stools in Unexpected Ways

Form and function collide in these little workhorses.