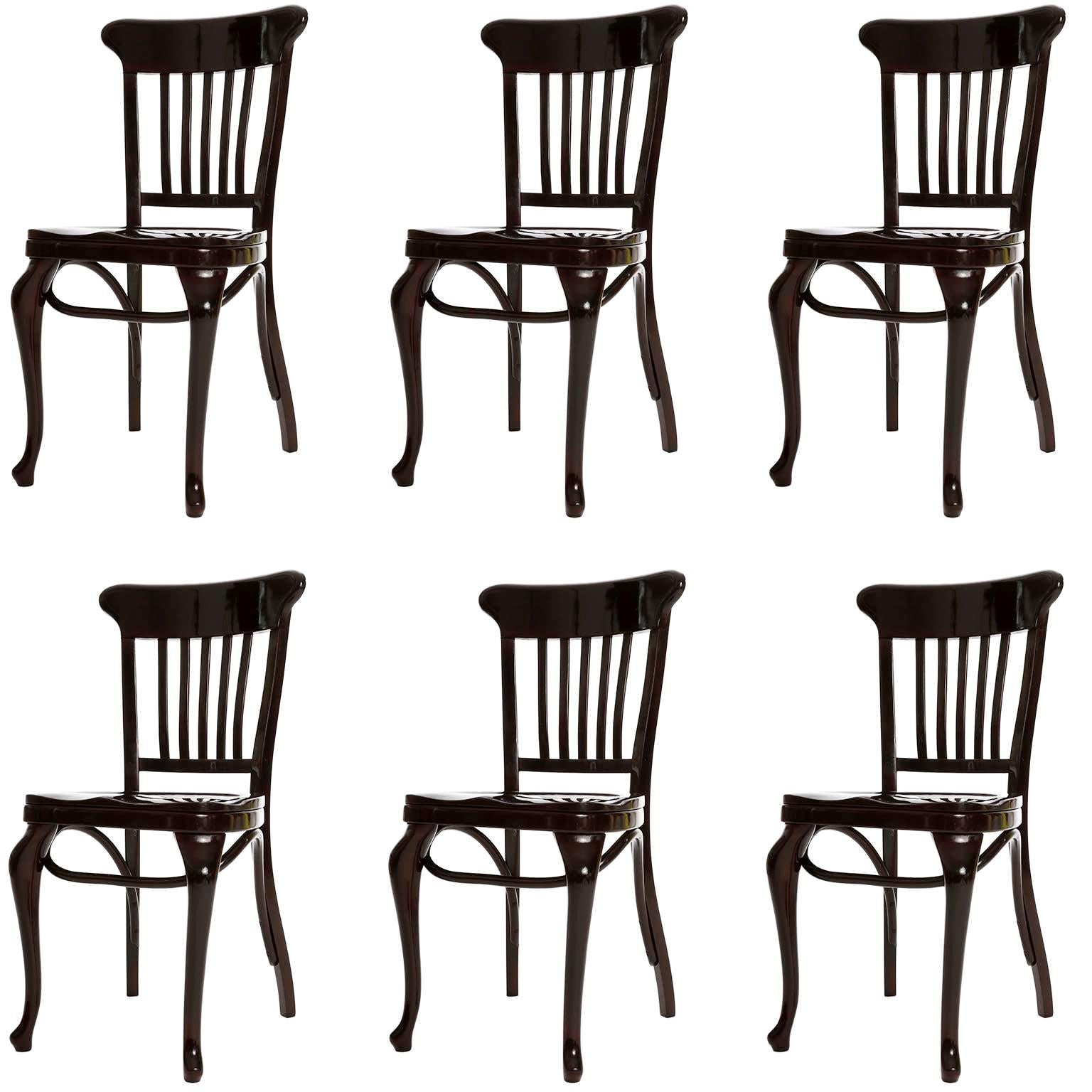 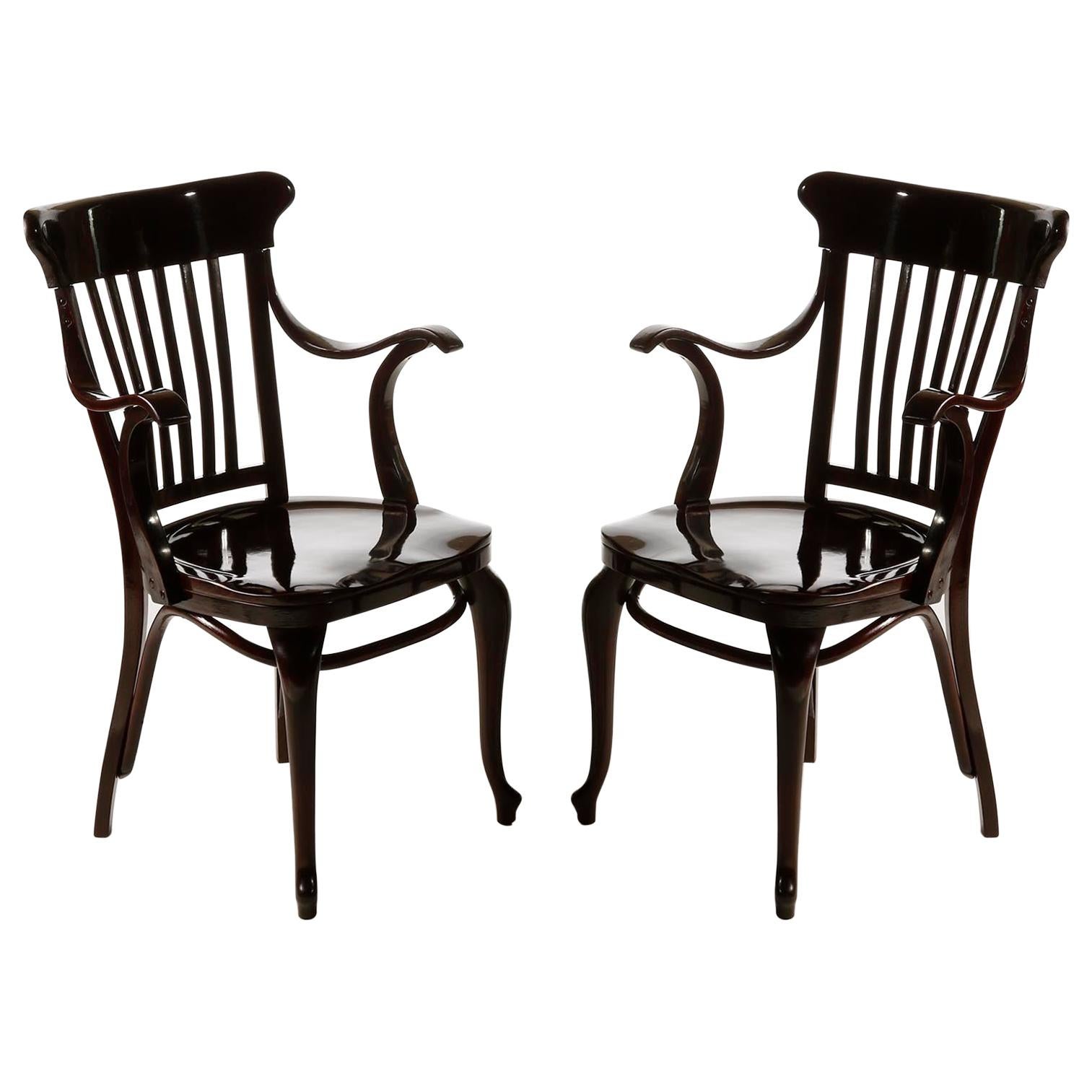 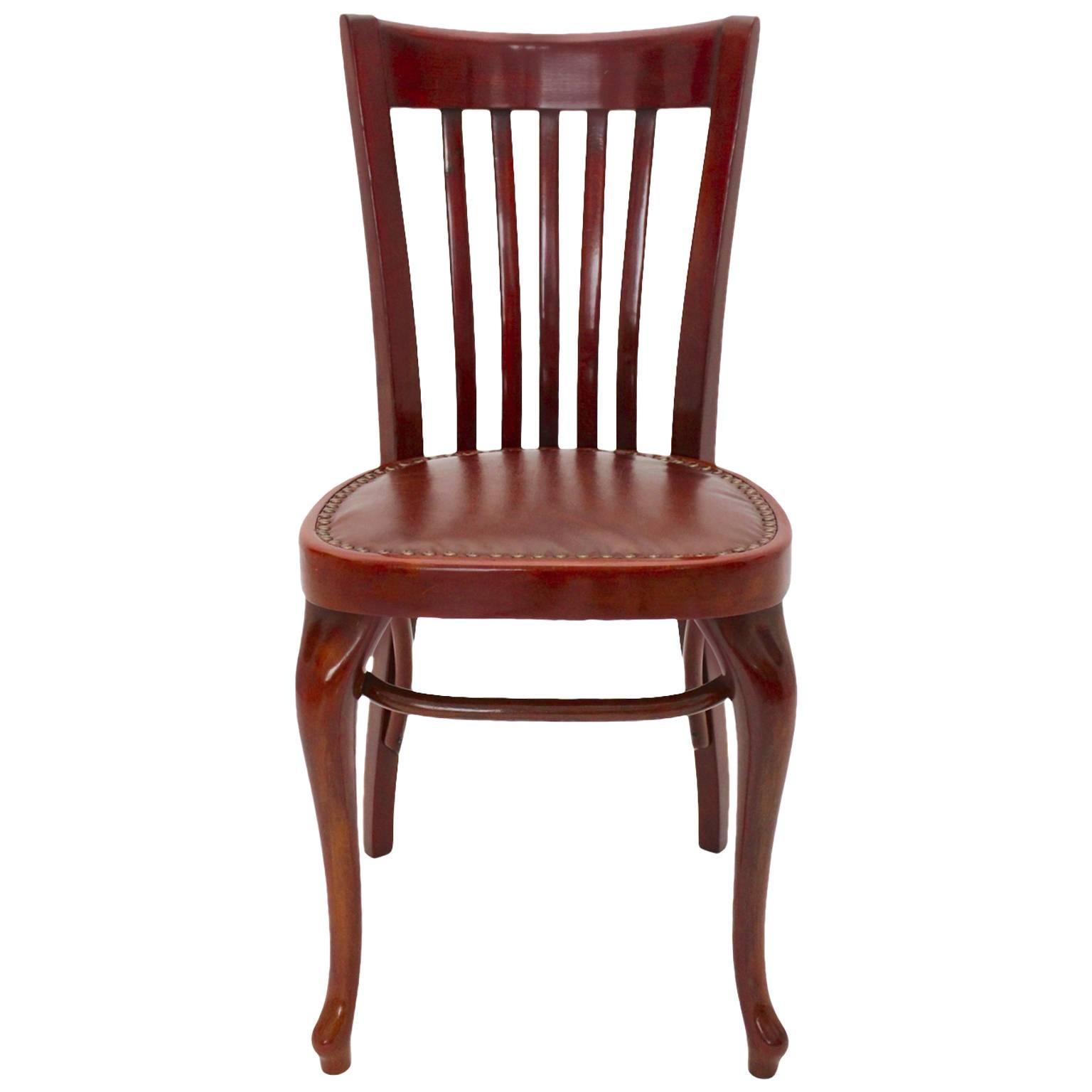 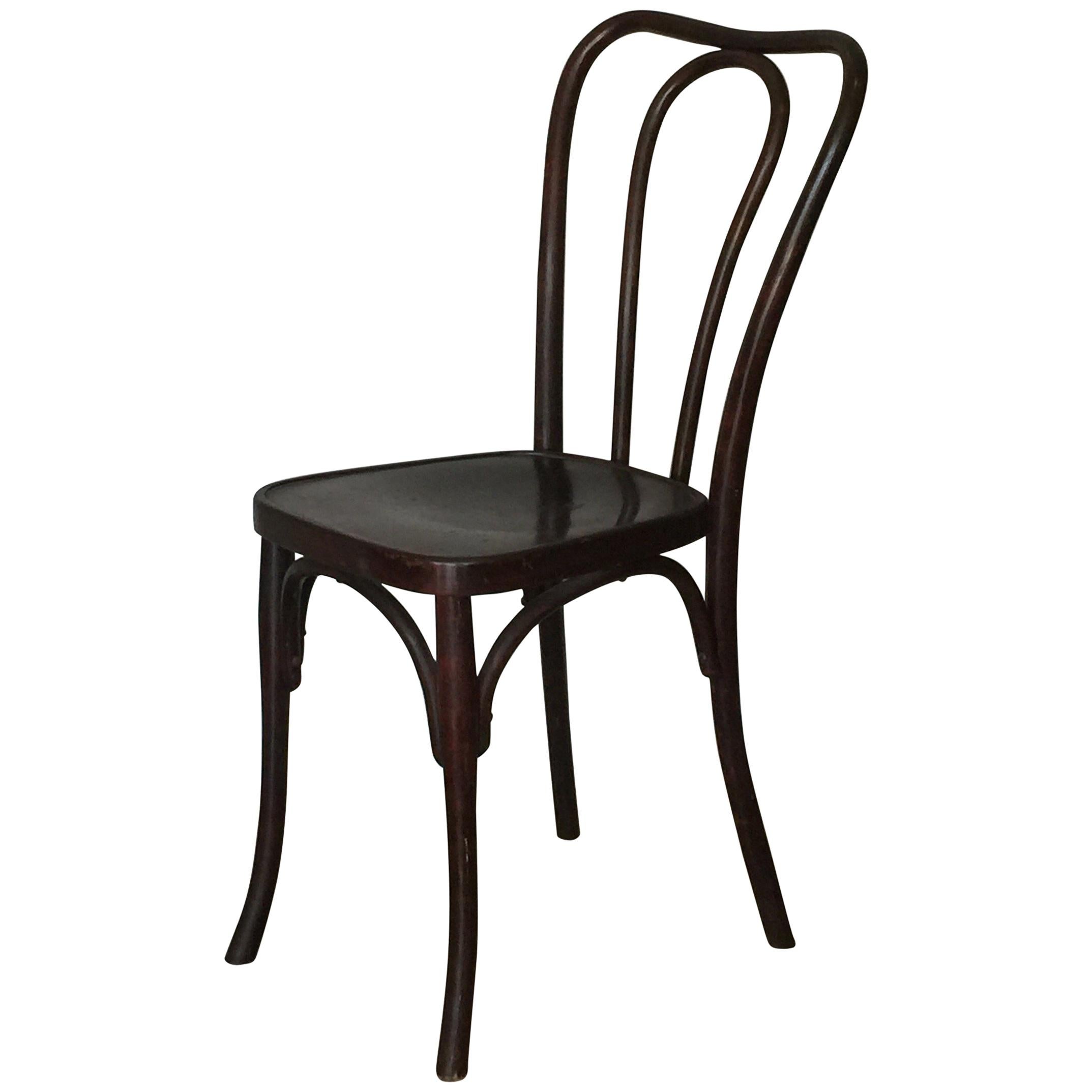 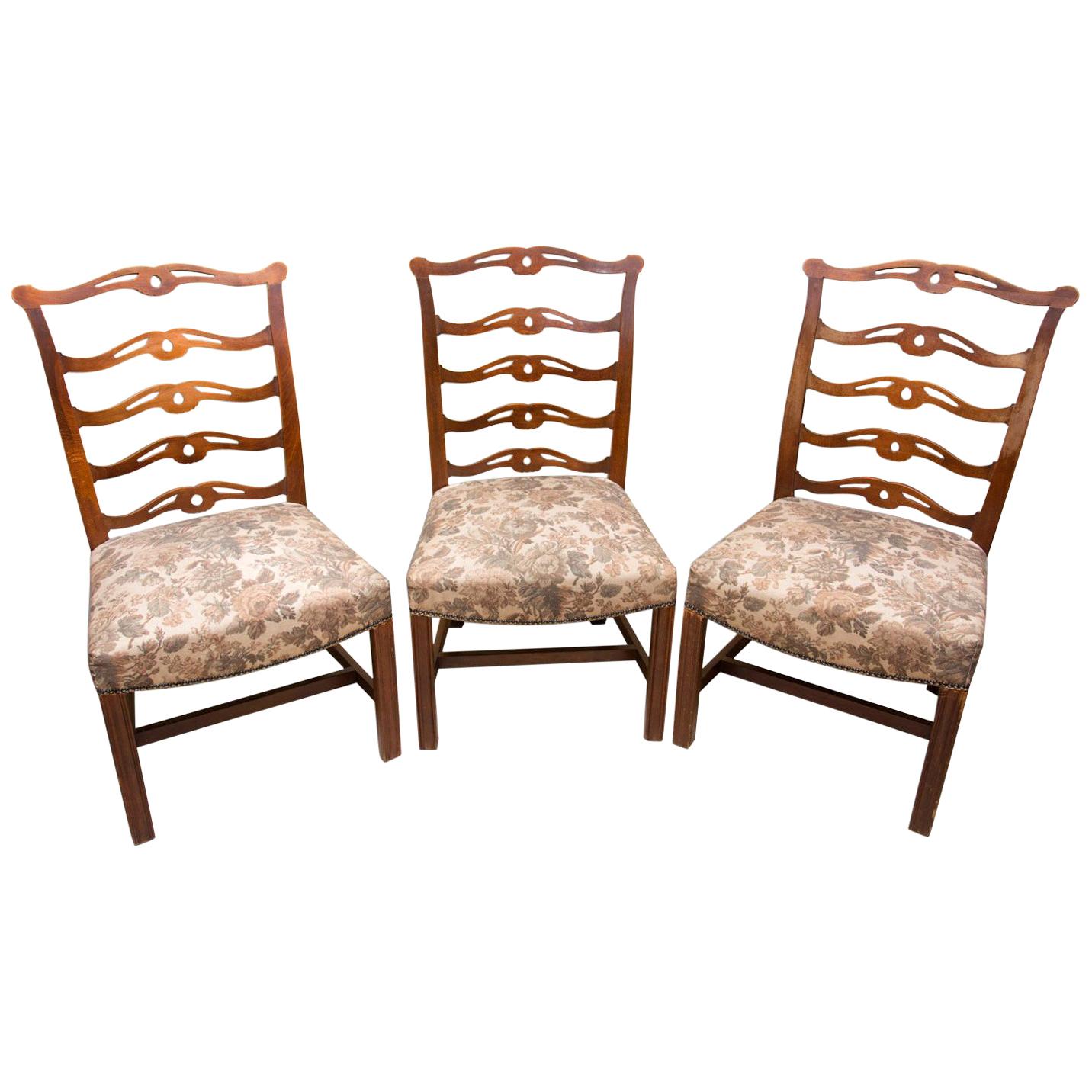 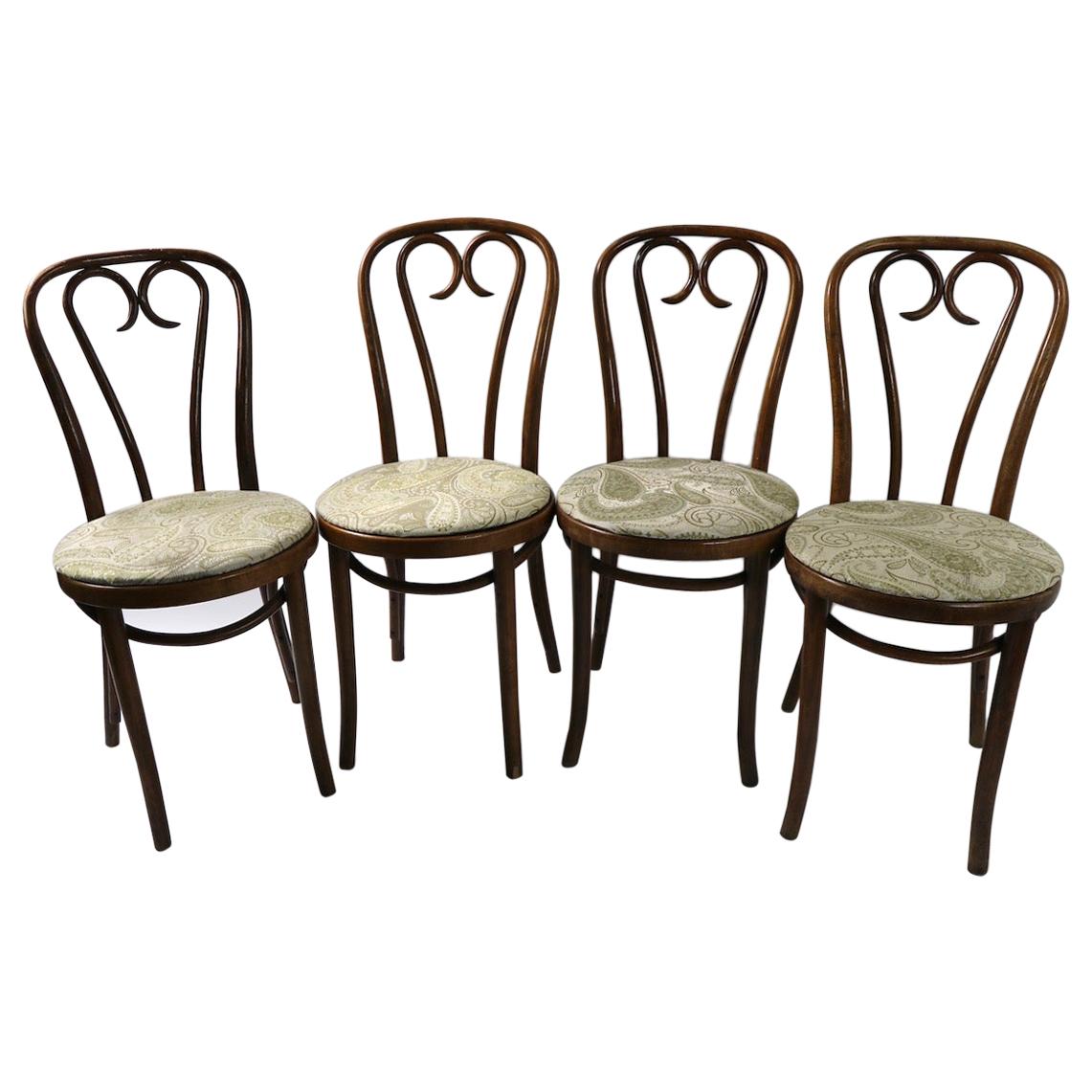 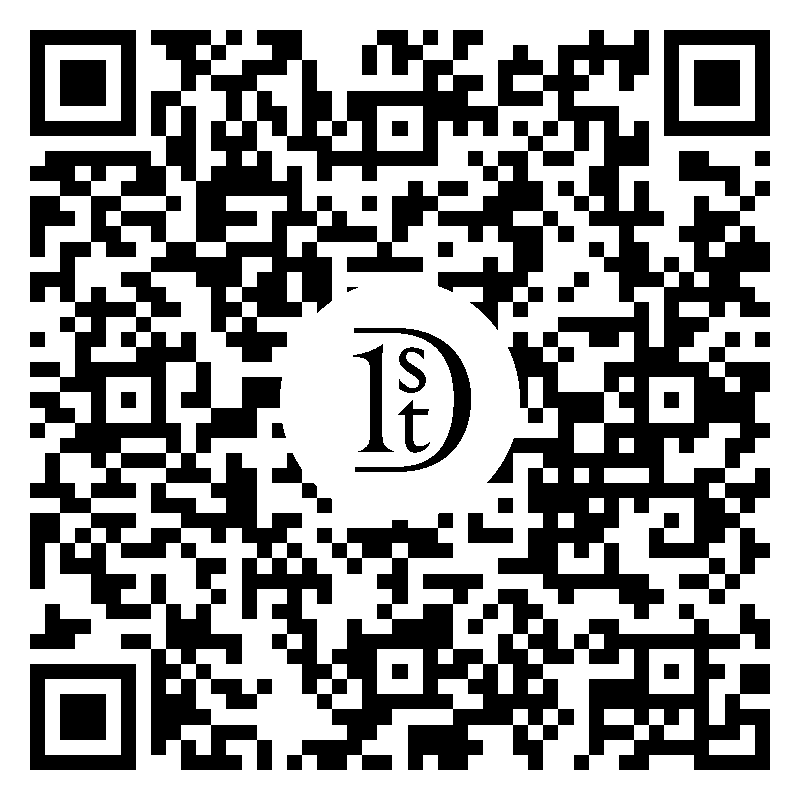 A set of ten fantastic and extremely rare Adolf Loos chairs manufactured by Thonet. Adolf Loos adopted this chair model inspired by 18th century Windsor chairs and used it for the Cafe Capua which interior was designed by him in 1913. The Cafe Capua is located in the 1st district of Vienna (Johannesgasse 3). It was the third interior design by Adolf Loos for a coffeehouse after the Cafe Museum and the Kärntner Bar. The chairs are in excellent condition. They have been refurbished and professionally restored. They are made of stained beech wood in a dark and almost black mahogany tone. The finish is French polished, a technique that involves hand applying many thin coats of shellac which was used for high quality pieces in that time. This is costly and time-consuming handcrafted procedure and they have been repolished in this way. There is also a matching pair of armchairs in a separate listing available (see last image). About Loos: Adolf Franz Karl Viktor Maria Loos (10 December 1870– 23 August 1933) was an Austrian and Czech architect and influential European theorist of modern architecture. His essay Ornament and Crime advocated smooth and clear surfaces in contrast to the lavish decorations of the fin de siècle and also to the more modern aesthetic principles of the Vienna Secession. Loos became a pioneer of modern architecture and contributed a body of theory and criticism of Modernism in architecture and design. Adolf Loos was one of the most important Viennese architects and designers besides Gustav Klimt, Koloman Moser, Josef Hoffmann, Joseph Maria Olbrich, and Otto Wagner in Vienna in the early 20th century. Reference: E. Ottillinger, Adolf Loos, Wohnkonzepte und Möbelentwürfe, Salzburg und Wien 1994, p. 38, No. 25 and p. 177.

1stDibs Buyer Protection Guaranteed
If your item arrives not as described, we’ll work with you and the seller to make it right. Learn more
About the Seller
5 / 5
Located in Graz, Austria

Always on the lookout for beautiful, rare and high-quality 20th-century design, HPS DESIGN INTERIOR offers furnishings made in the 1950s to 1970s in Austria, Italy, Germany and Scandinavian, as well as selected Jugendstil, Art Nouveau and Art Deco pieces from the 1900s and Bauhaus items from the 1930s. Its inventory is predominately li...

Diamond Seller
These expertly vetted sellers are 1stDibs' most experienced sellers and are rated highest by our customers.
Established in 2014
1stDibs seller since 2014
846 sales on 1stDibs
Typical response time: <1 hour
More From This Seller

US$5,000 / set
Adolf Loos, Early 20th Century Secessionist Chairs in Oak, Set of Three
By Adolf Loos
Located in Prague 8, CZ
These chairs by Adolf Loos comes from the Rudolf Kraus apartment (brother of Karl Kraus) at address Vienna 1, Nibelungengasse 13. Made of solid oakwood. In the original, but very goo...
Category

US$2,959 / item
Set of 2 Bentwood Cafe Chairs Attributed to Thonet
By Thonet
Located in New York, NY
Nice set of 2 dining, or cafe, chairs in bentwood and upholstery, attributed to Thonet. Clean ready to use condition, seats in later vinyl upholstery. No breaks or structural damage,...
Category