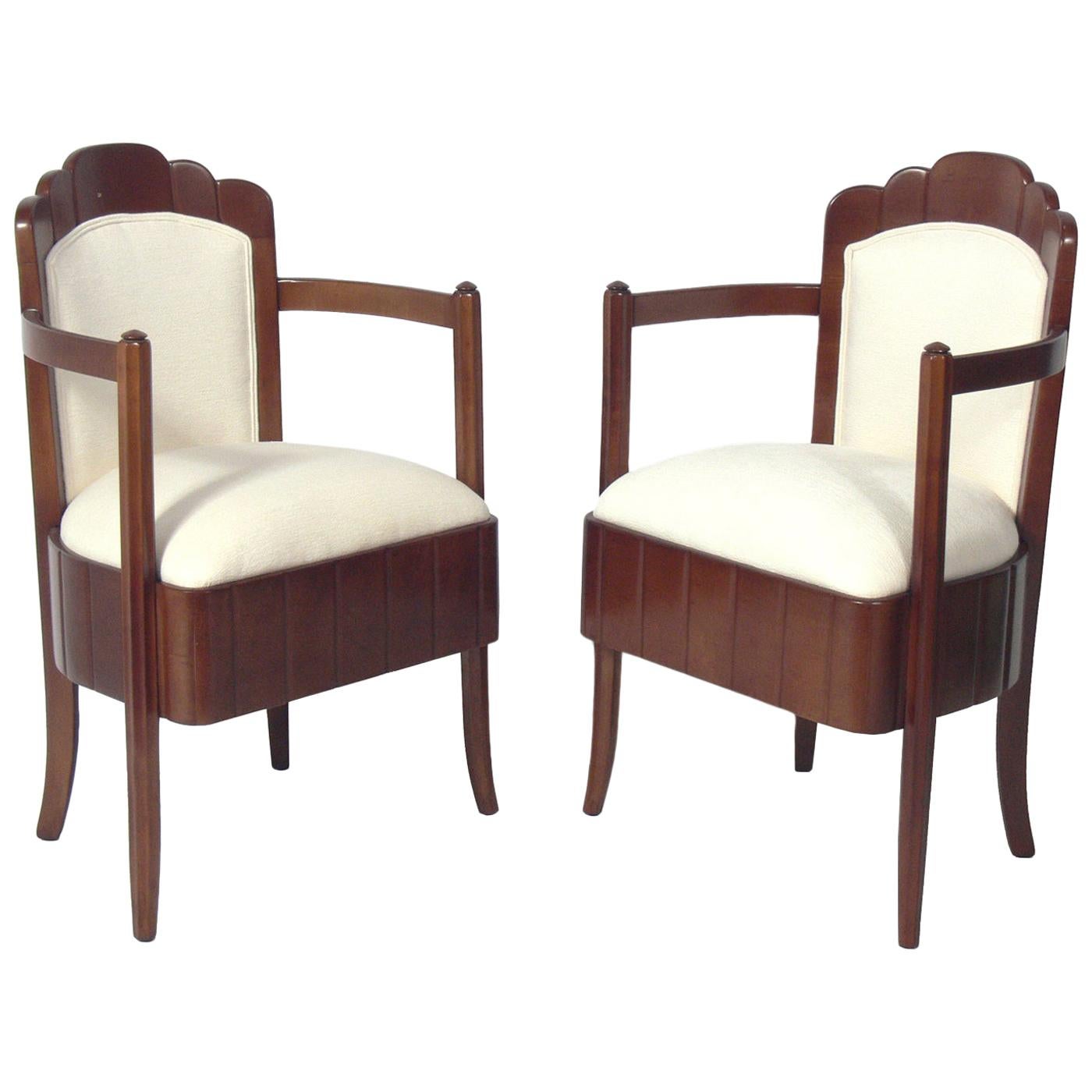 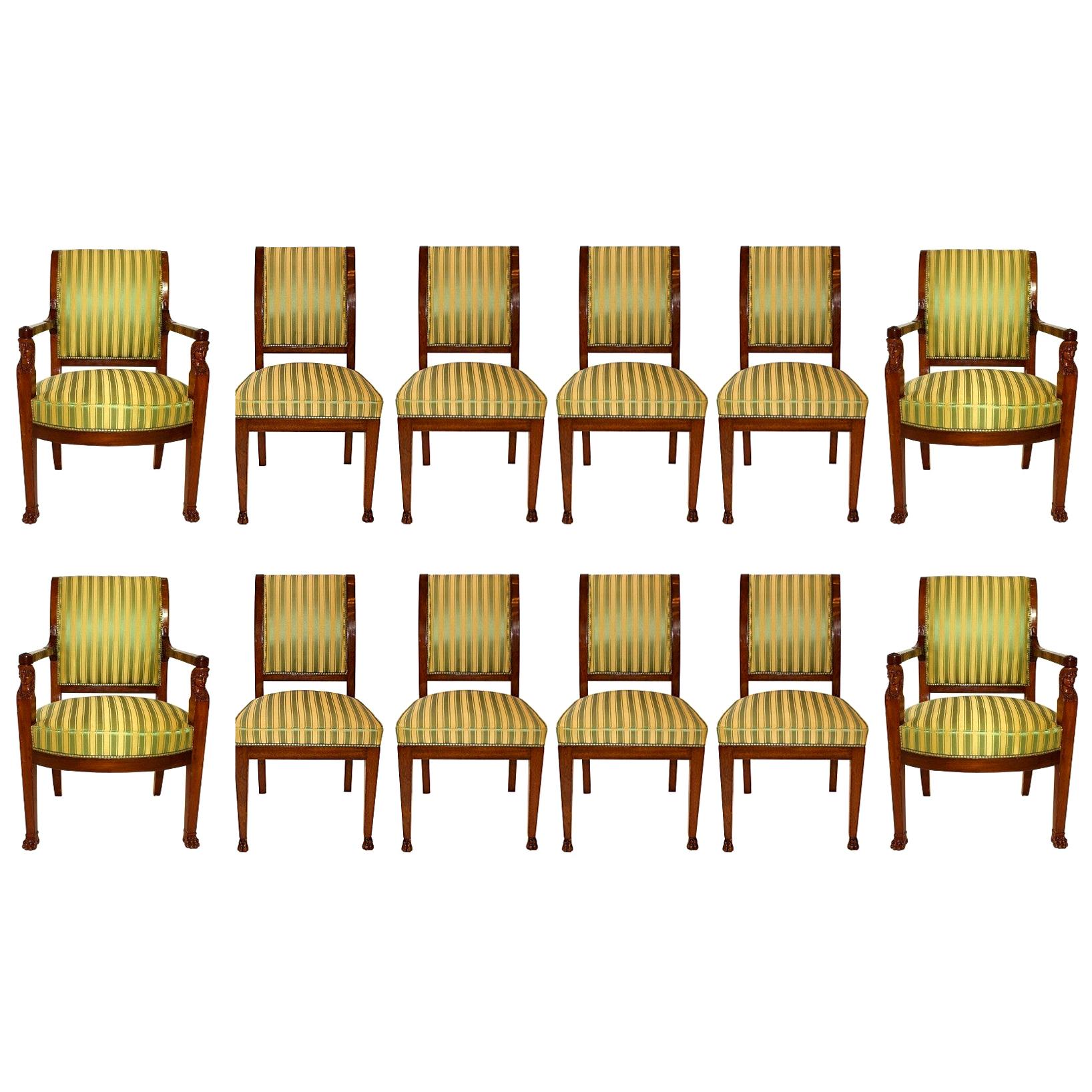 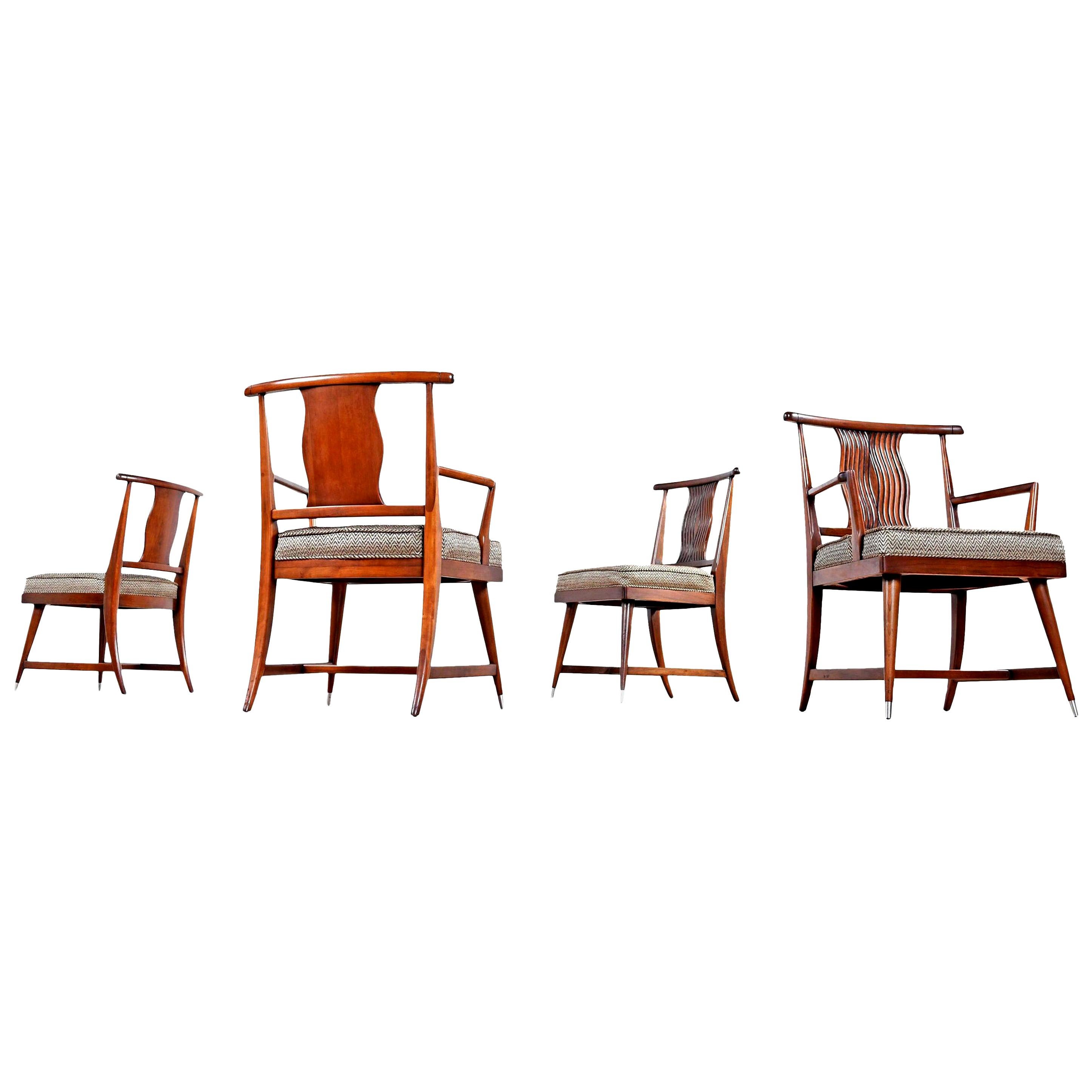 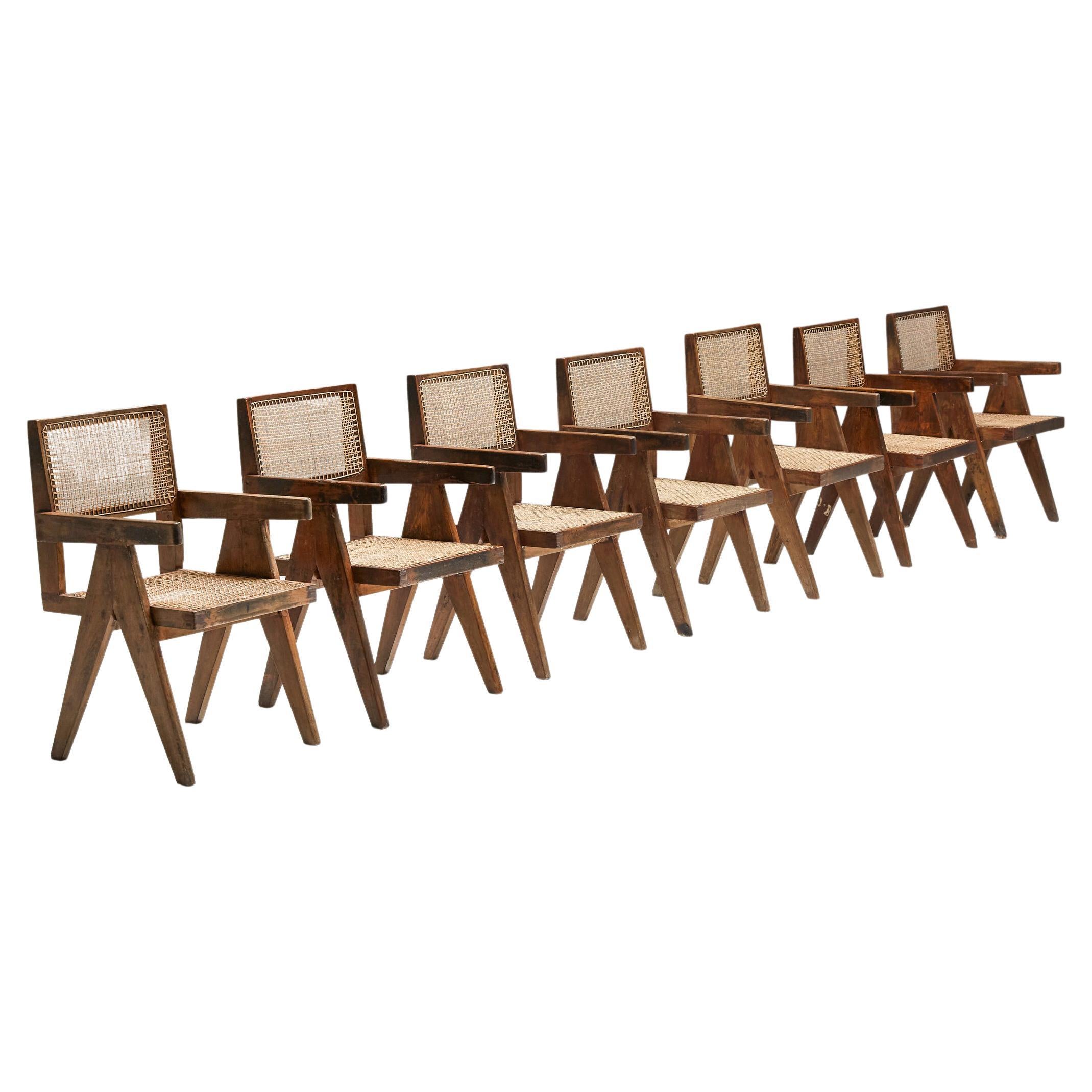 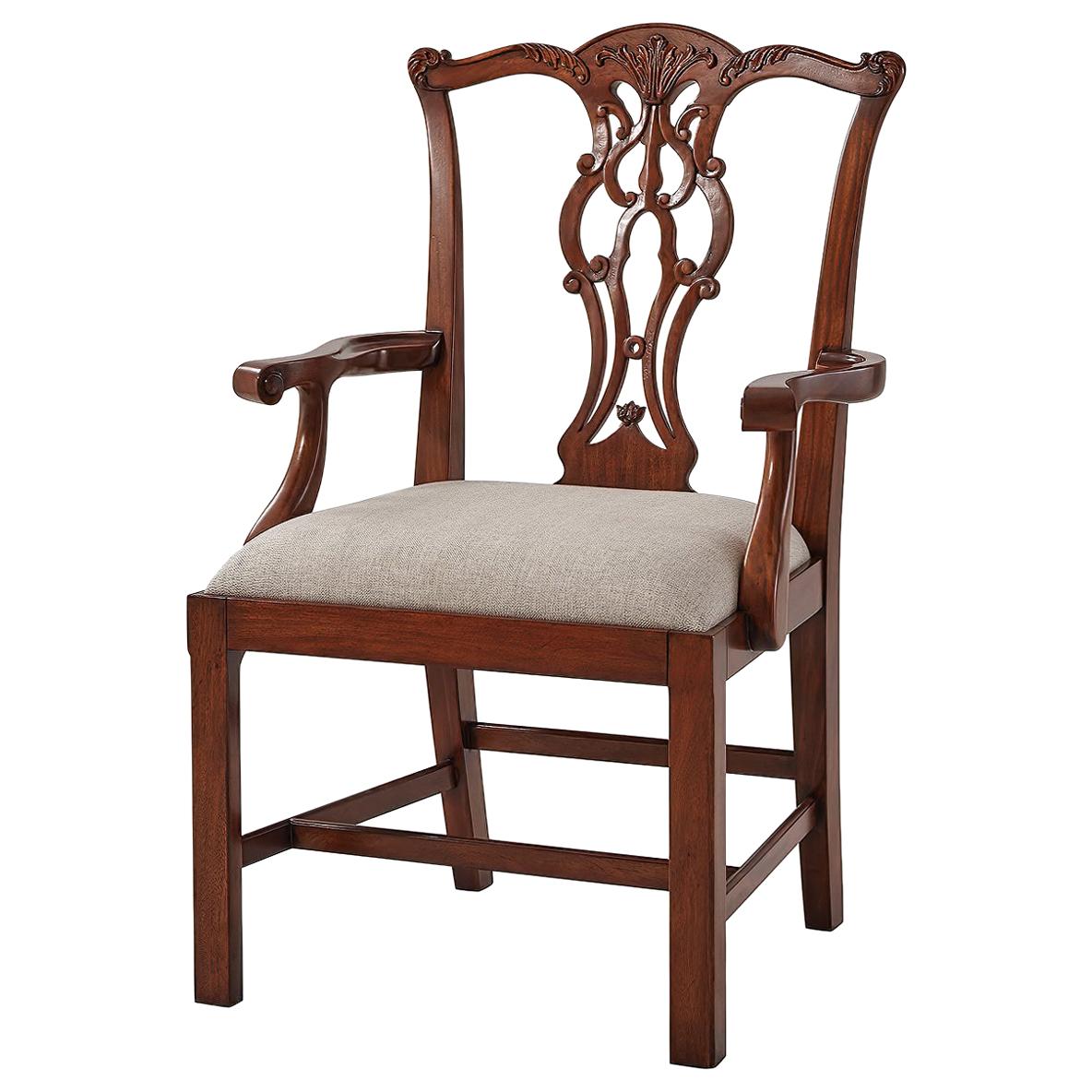 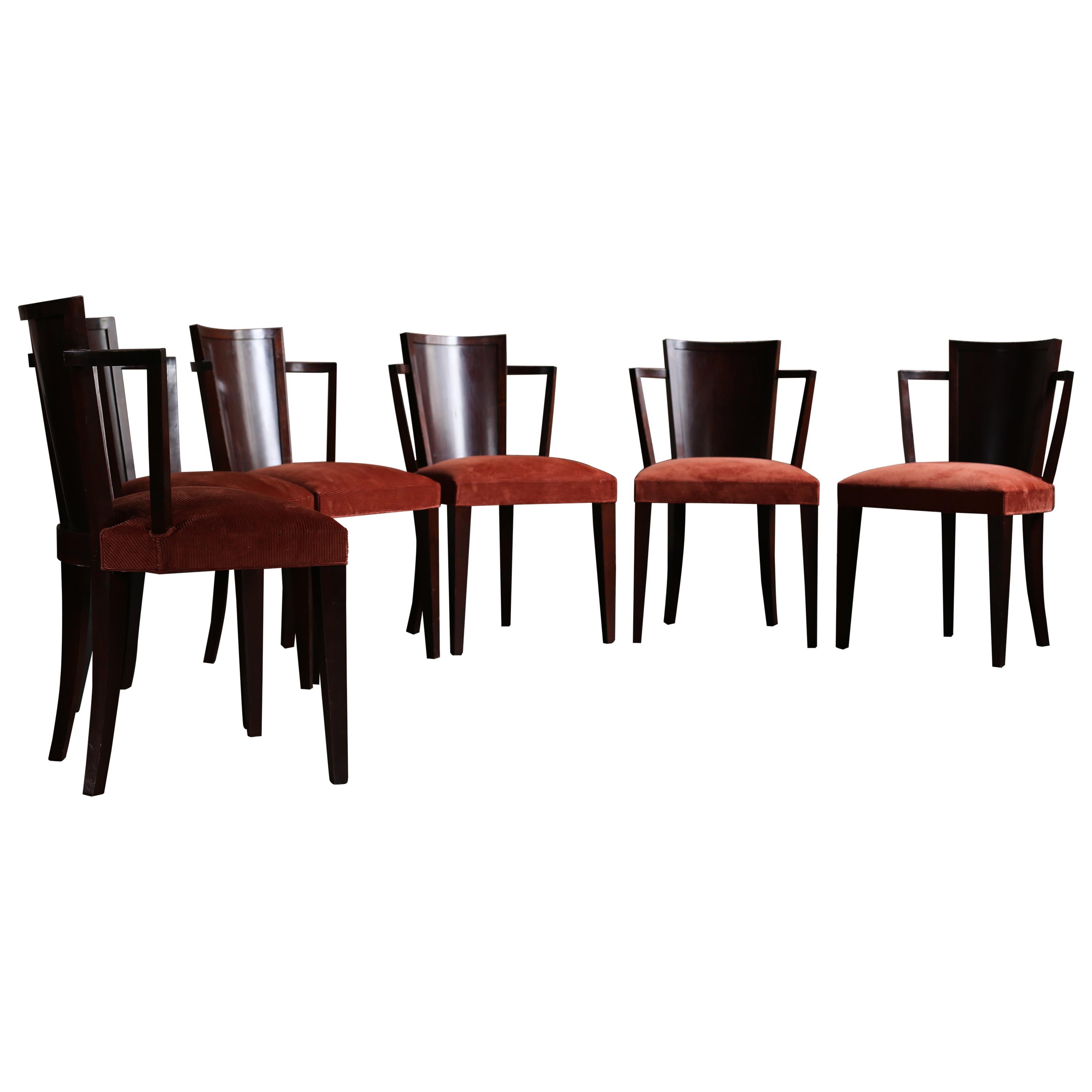 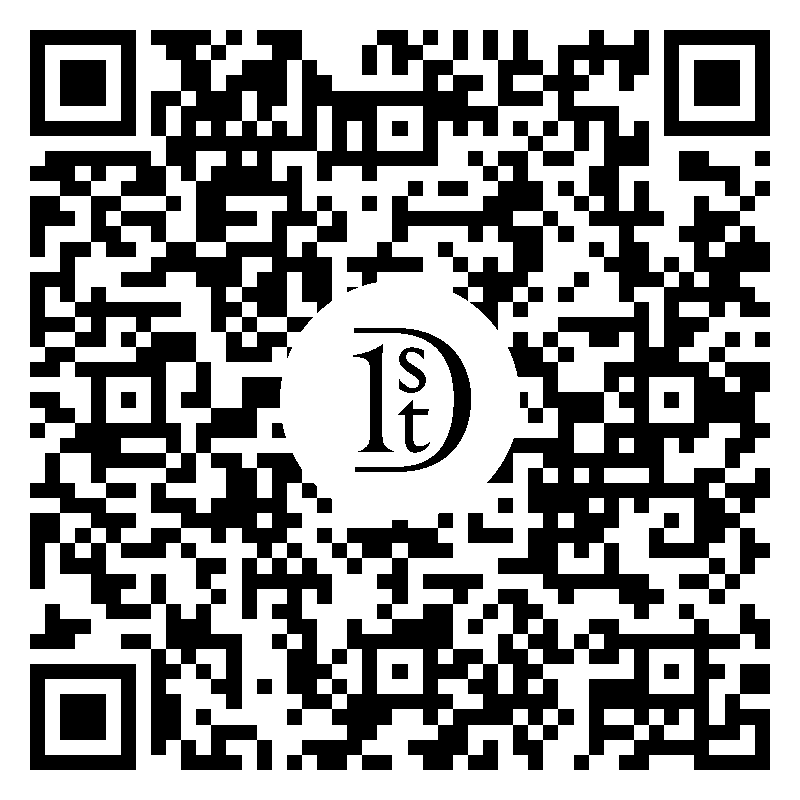 This set of important Pierre Patout open arm chairs were from the first class dining room on board of the S.S. Île de France, circa 1927. With excellent provenance, this exact set was previously sold at Christie's New York on June 1, 2006 during their Ocean Liner Furnishings and Art auction as Lot 286. As seen in the last photo, they had a hammer price of $12,000 plus buyers premium (usually from 20 to 30% of hammer price) and had an estimate of up to $25,000. Keep in mind that this is in 2006 and the inflation rate since then has been almost 30% in total. One of the chairs still retains the Christie's label as can be seen in the last photo. These Pierre Patout french art deco dining chairs feature an open arm design, flared legs, scalloped Mahogany sections which make up the seat base and seat back. Covered in soft and sumptuous velvet which has a light orange-brown color. Such incredible craftsmanship and quality materials that you just don't find in todays products. This set is priced for the set of 6 chairs, if you wish to purchase only a pair contact us to discuss. Such an amazing set for art and design collectors or interior designers looking for something truly special for best client. These chairs have incredible heft - you can feel the quality at first touch. These chairs are just exquisite - get them while they are still available and before someone else does. ABOUT THE DESIGNER: Pierre Patout (1879-1965), was a close friend and associate of Jacques-Emile Ruhlman, creating designs for the 1925 Exposition of Decorative Arts. Patout designed the main gateway of the Exposition on the Place de la Concorde, and also The Hôtel du Riche Collectionneur, one of the most popular attractions at the Exposition. Inside it displayed new furniture designs of Emile-Jacques Ruhlmann, as well as Art Deco fabrics, carpets, and a painting by Jean Dupas. His success at the Exposition led to commissions for transatlantic ocean liners including the Ile de France, L'Atlantique, and, the most famous of all the SS Normandie. The highlight of the Normandie interior was the dining room, illuminated with rows of lighted columns of Lalique crystal. The SS Île de France was the first major ocean liner built after World War I, and was the first liner ever to be decorated almost entirely with modern designs associated with the Art Deco style. She was neither the largest ship nor the fastest, but was considered the most beautifully decorated ship built by CGT, becoming the favored ship of the pre-World War II era, carrying young, wealthy and fashionable Americans to Europe and back. The Ile de France starred in the movie 'The Last Voyage' as a doomed ocean liner, and actually being partially sunk, while scenes were being filmed with actors playing their parts in the flooded ship. The movie was released in 1960. These Pierre Patout Art Moderne open armchairs would work great in a Art Deco, Mid-Century Modern, Scandanavian Modern or Danish Modern home or penthouse apartment but could also look fantastic in a Contemporary or Post-Modern room. Also consider mixing it up in a Traditional, Transitional, or French Classical or Neoclassical room with a splash of juxtaposition. Would also be an apt choice in a commercial project such as a hotel lobby lounge or members club, creative design studio or high-rise executive office. Consider using as side chairs, dining, cafe or breakfast table chairs, bedside chairs, fireside chairs, dressing or changing room chairs, hallway chairs, entryway or mudroom chairs, nursing or reading chairs, conference room chairs, office or desk chairs, guest chairs, lobby chairs, lounge chairs or occasional chairs ideal in virtually any setting. MEASUREMENTS: H 36.5" x W 23.25" x D 21" Seat Height: 20.75" Seat Depth: 16.5" Arm Height: 29.75" CONDITION: Very good vintage condition. Chairs were likely restored prior to the Christie's sale in 2006. They have been very lightly used since then, or possibly rarely used. The Mahogany finish which appears to be a French Lacquer is bright and clean with some light wear mostly on the lower parts of the legs. Velvet fabric has some light wear. Overall very attractive examples, sturdy and structurally sound, ready to be used immediately.

Recognized Seller
These prestigious sellers are industry leaders and represent the highest echelon for item quality and design.
Diamond Seller
These expertly vetted sellers are 1stDibs' most experienced sellers and are rated highest by our customers.
Established in 2012
1stDibs seller since 2015
1,504 sales on 1stDibs
Typical response time: 2 hours
Associations
20th Century Specialists
More From This Seller

US$3,895 / set
Set of Six Dining Room Chairs and Armchairs, Mahogany, Northern Germany
Located in Greding, DE
Set of six chairs, consisting of four chairs and two armchairs out of mahogany, circa 1830. The chairs stand on sabre legs and are decorated with bronze fittings in the shape of lamb...
Category