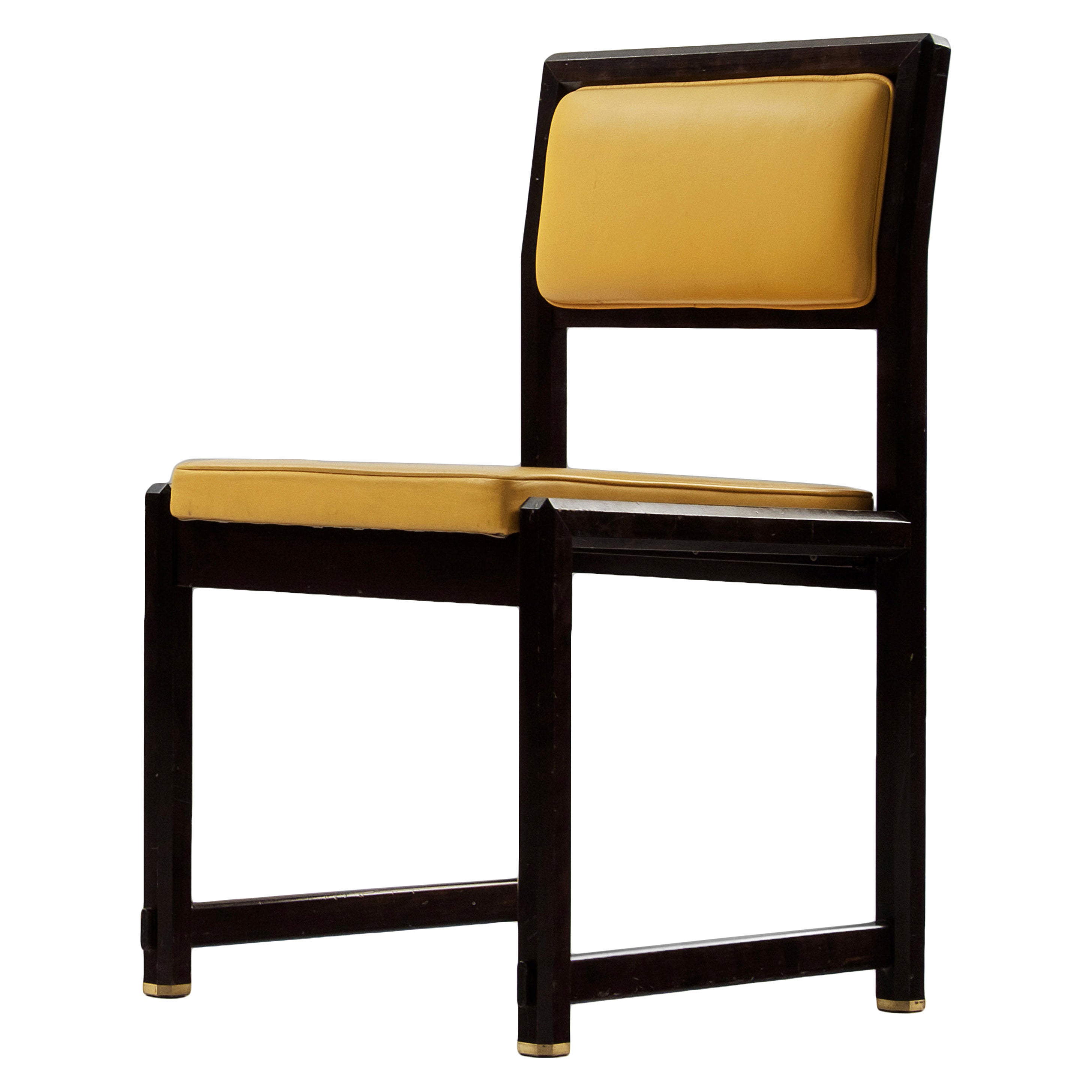 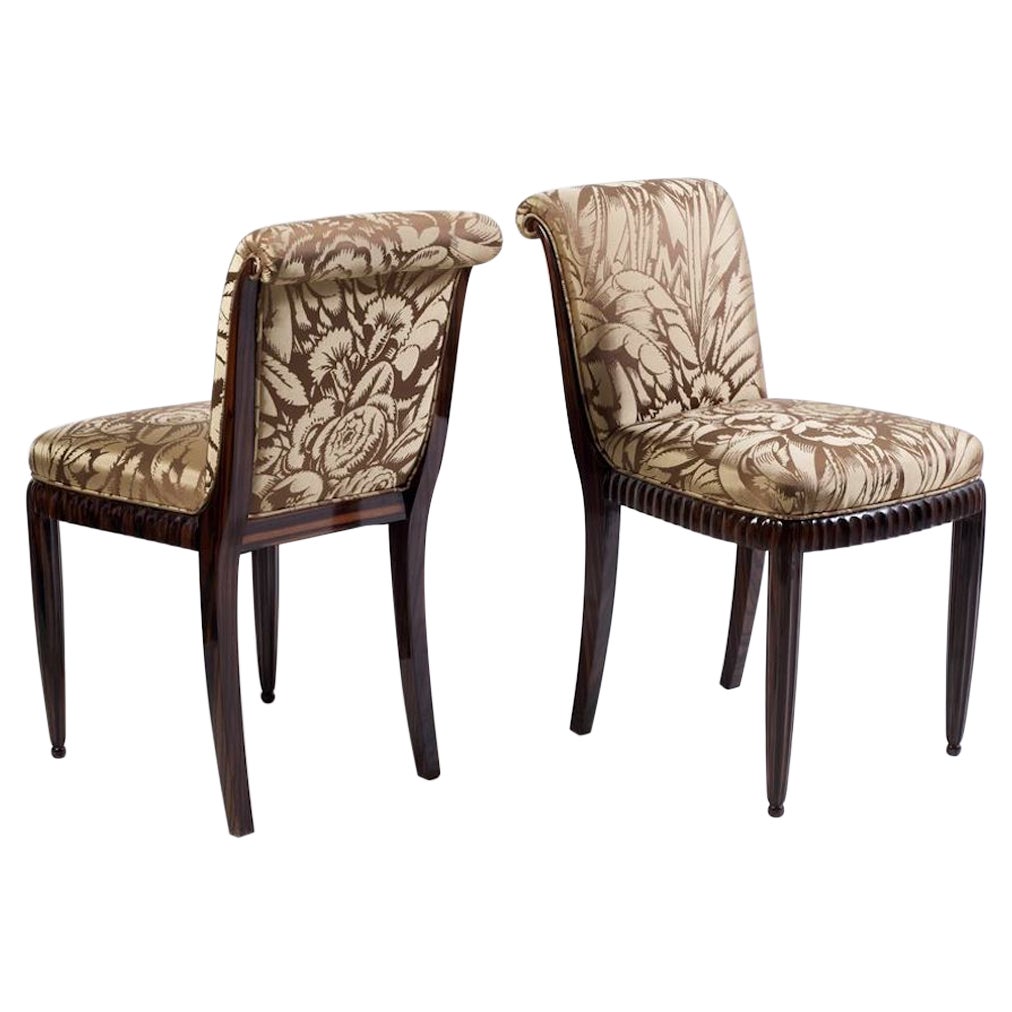 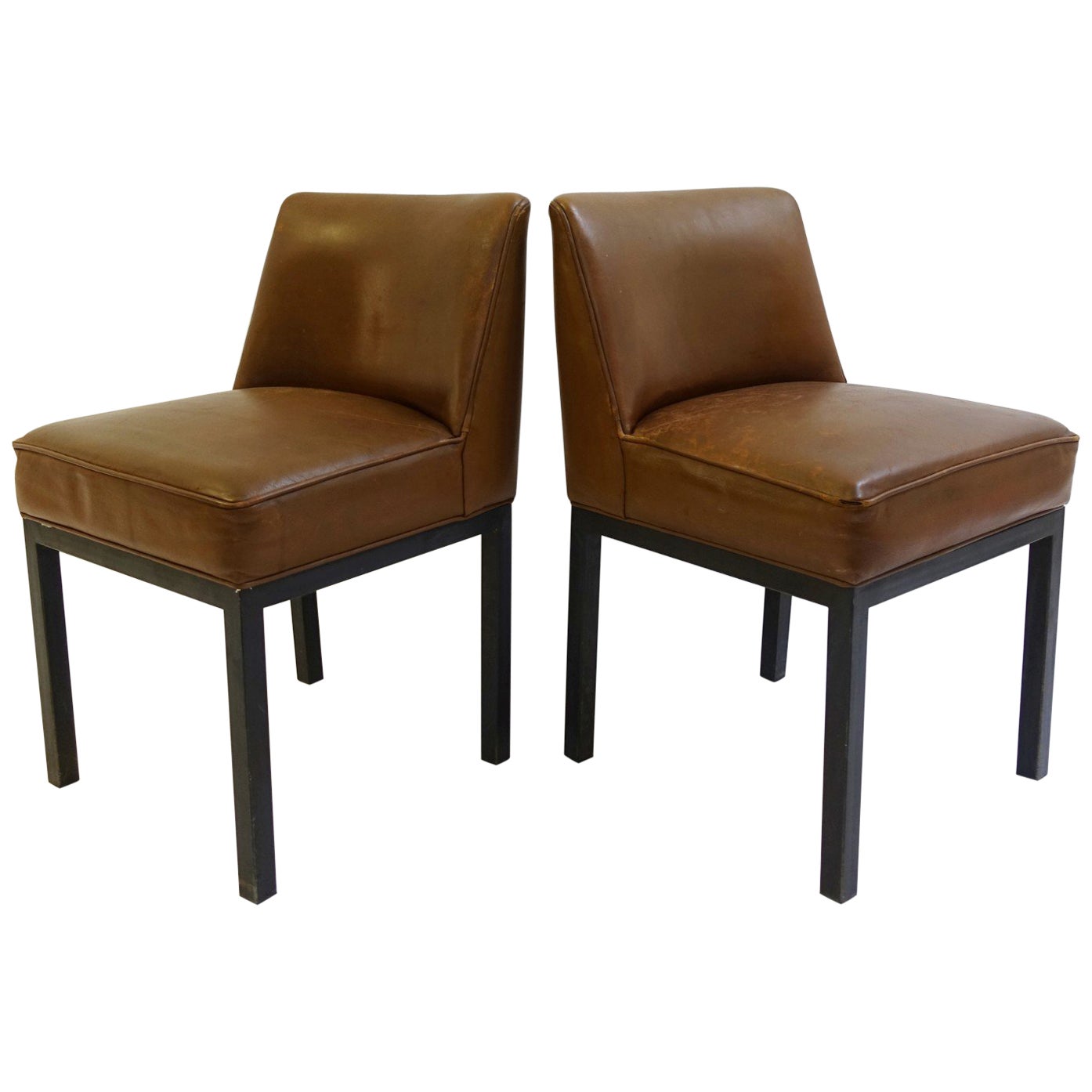 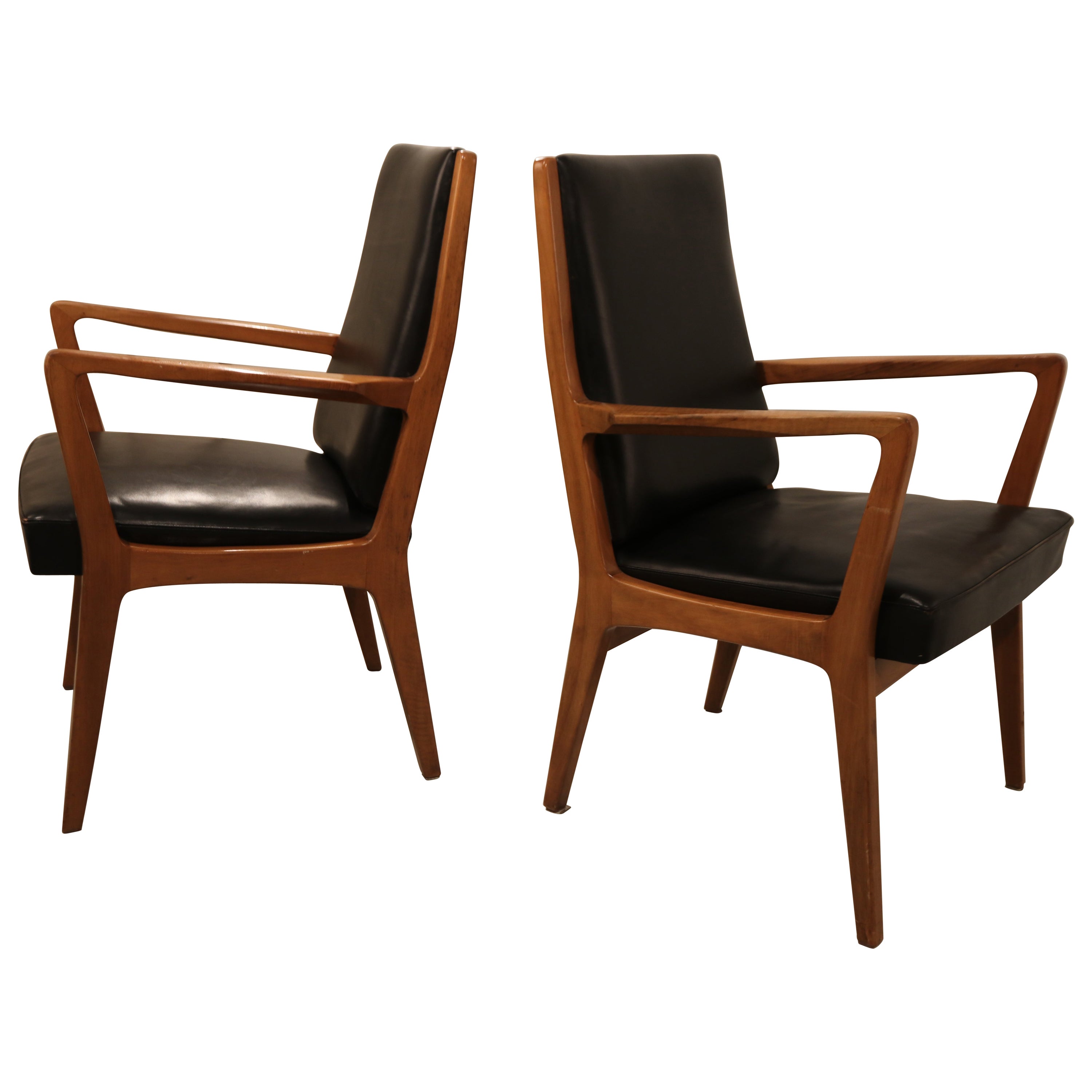 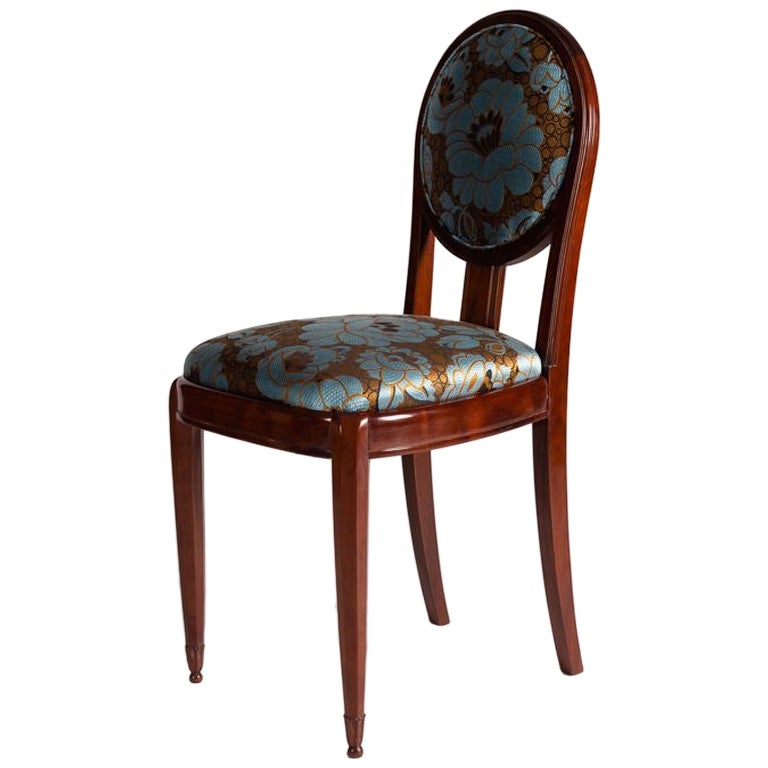 Pair of Vintage Alpine Side Chairs in Solid Elm 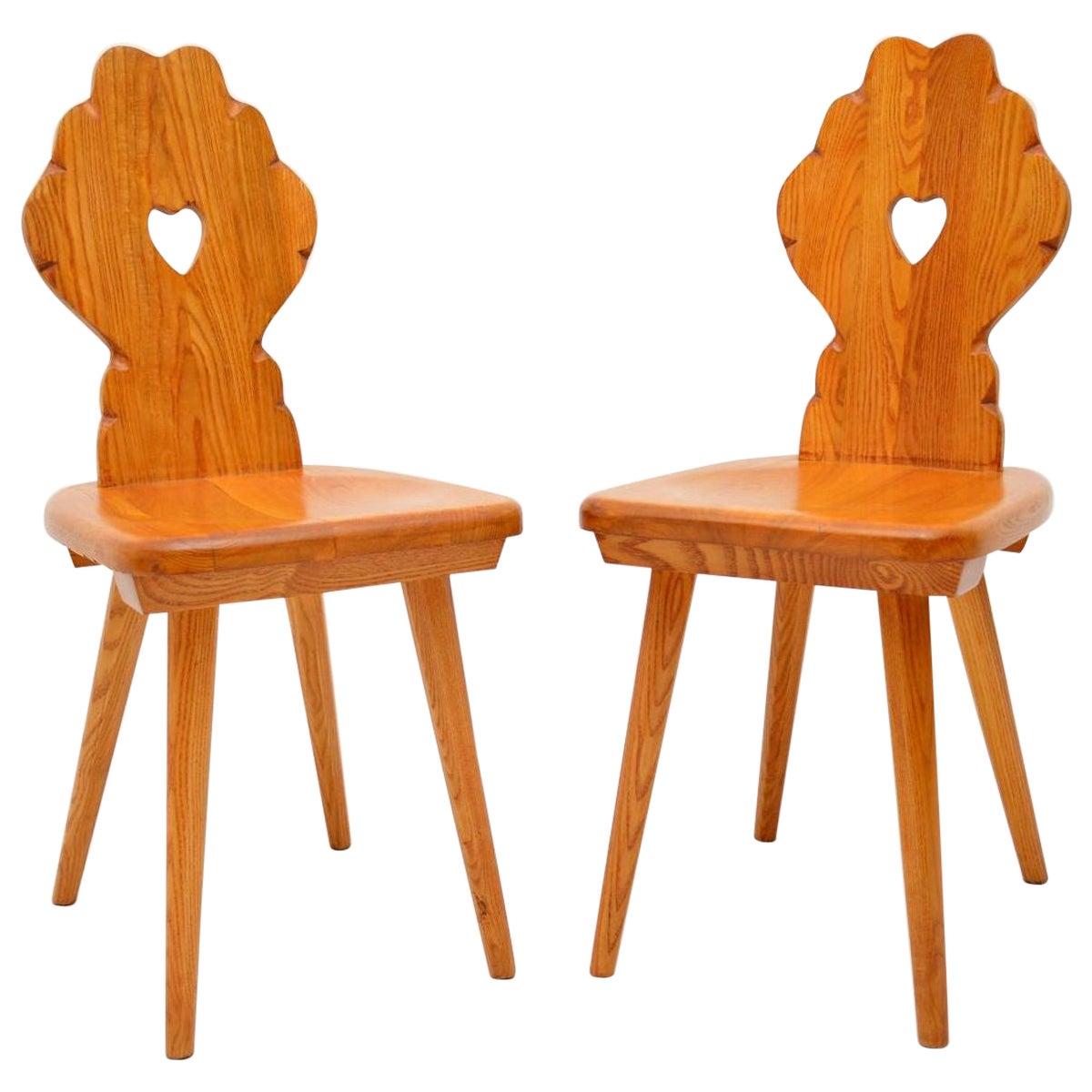 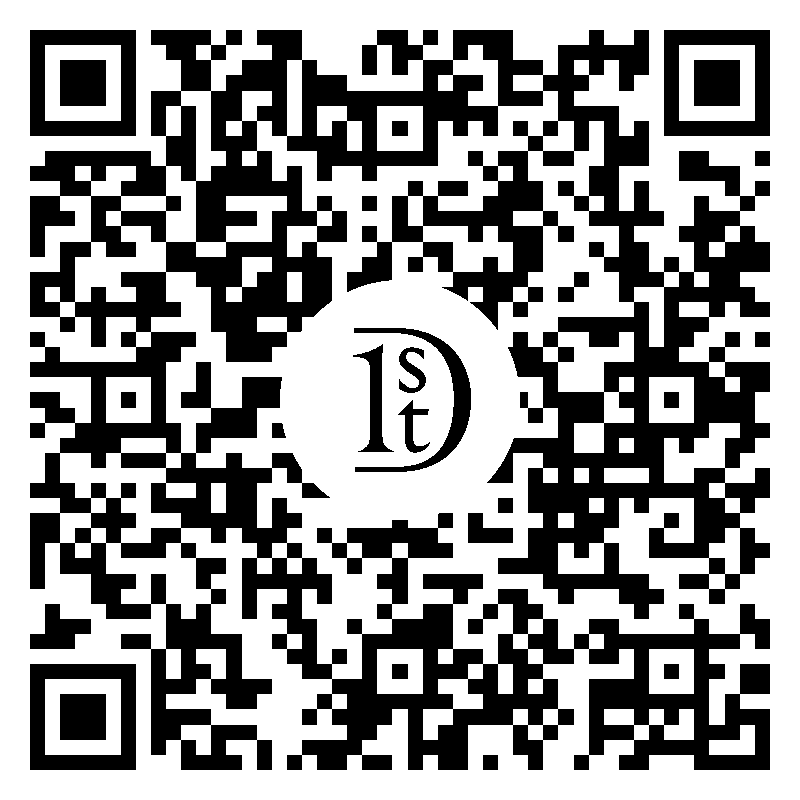 Jules Wabbes for Le Mobilier Universel, pair of side chairs model 'JJW 48', leather, chromium-plated metal, Belgium, c. 1963. These modest and timeless chairs are designed by the well known Belgian designer Jules Wabbes. The dining chairs feature a minimalistic, geometric metal frame. The seat is thick and reupholstered in high quality aniline leather by the experienced craftsmen of our in-house atelier. This model has a very strong character. Jules Wabbes (1919-1974) was a Belgian furniture designer, architect and professor. He wasn't (as many of his contemporaries) trained as a designer or architect but learned the Craft of designer furniture by sheer necessity. When Wabbes was 24, he opened an antiques shop where some of the furniture was in need of restoration. Therefore, he opened a small workshop where he taught himself how to restore furniture. Alongside restoration he also started to design furniture. His work is aristocratic and modest, and characterized by a sensual use of materials and a clear, almost architectural tectonics. Wabbes developed a line and idiom of its own, averse to the playful and swinging style of many other furniture designs of the postwar period. Wabbes, influenced by American designers such as Edward Wormley, chose to build his furniture with solid wood giving his designs not only a luxurious appearance but also honest, timeless and sophisticated aesthetics. Literature: Wabbes-Ferran, Marie. Jules Wabbes. 1919-1974. Binnenhuisarchitect. Doornik: La Renaissance Du Livre, 2002, p. 128 and 139.

Recognized Seller
These prestigious sellers are industry leaders and represent the highest echelon for item quality and design.
Diamond Seller
These expertly vetted sellers are 1stDibs' most experienced sellers and are rated highest by our customers.
Established in 2006
1stDibs seller since 2012
3,312 sales on 1stDibs
Typical response time: 1 hour
Associations
20th Century Specialists
More From This Seller

Jules Leleu, Pair of Art Deco Side Chairs, France, 1925
By Jules Leleu
Located in New York, NY
The house of Leleu rose to prominence in the 1920s during the Art Deco period, and became known for the ornate classicism of its richly refined furniture and lavish interiors. All...
Category

US$3,048
Pair of Leather Scandinavian Style Design Side Chairs
Located in Amsterdam, NL
A wonderful set of two large beautifully shaped side chairs or dining chairs with a beautiful soft aniline leather seat. The chairs were once sold by Cologne's chicest furniture shop...
Category

US$1,800 / set
Jules Leleu, Art Deco Side Chair, France, 1925
By Jules Leleu
Located in New York, NY
A lacquered walnut side chair designed by Jules Leleu with an elegant, tall back covered in a round upholstered cushion, and beautifully carved, tapered legs.
Category

US$19,800
Pair of Vintage Alpine Side Chairs in Solid Elm
Located in London, GB
A stunning pair of vintage side chairs in solid Elm. These were made in Switzerland and date from circa 1950s. They are of amazing quality and have a beautiful design, with elegant s...
Category

Pair of Vintage Alpine Side Chairs in Solid Elm

Brown Leather T-Shaped Back Pair of Side Chairs, Morocco, Contemporary

US$6,950 / set
Pair of Lacquered Side Chairs
Located in Brooklyn, NY
Original.
Category

Pair of Lacquered Side Chairs