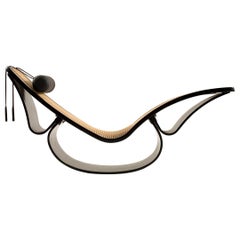 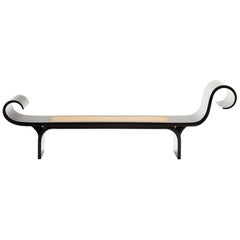 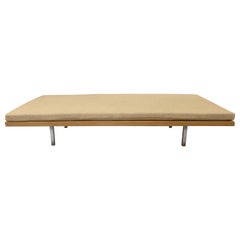 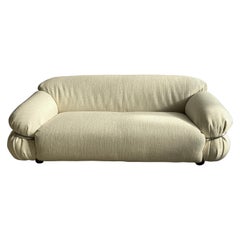 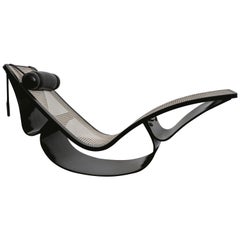 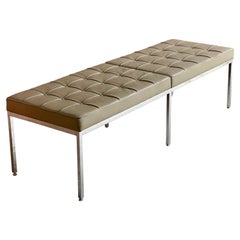 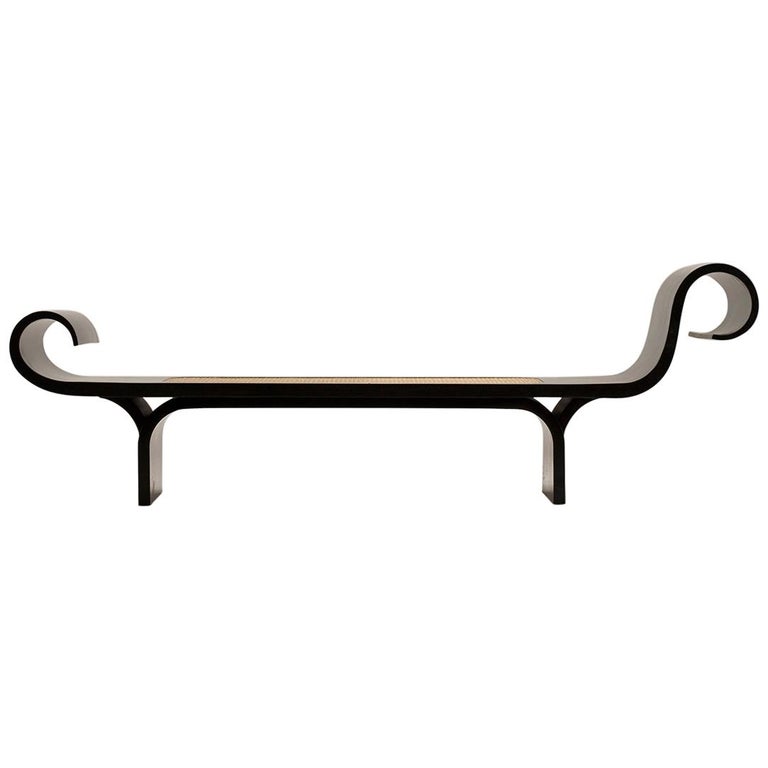 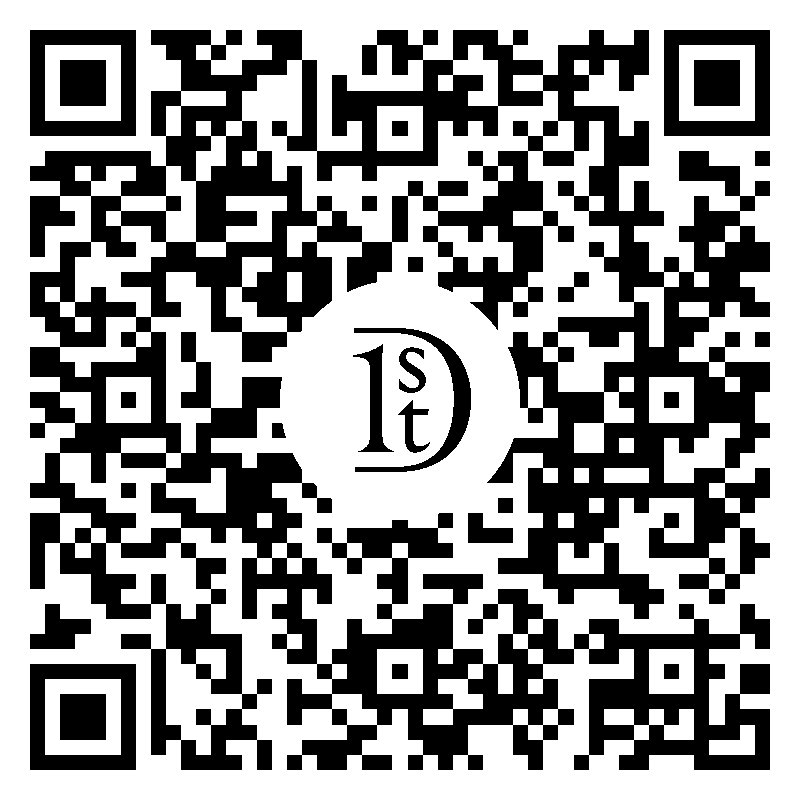 Mid-Century Modern Marquesa by Brazilian designers Oscar and Anna Maria Niemeyer, Brazil, 1970s The celebrated architect Oscar Niemeyer, best known for his iconic design of civic buildings for Brasília, Brazil's capital, is lauded as one of the key figures in the development of modern architecture. In 1971 he launched the furniture line "On", which was developed in partnership with his daughter Anna Maria Niemeyer. This elegant bench was originally designed in 1974 and is a great example of the organic curves and sinuous lines characteristic of Niemeyer's oeuvre. Consisting of a structure in lacquered black bent plywood, the Marquesa features a a striking linear silhouette with twirling armrests and skilfully handwoven cane seat. This piece is an authorized reedition by Teperman manufactured circa 2000s. Literature: "Móvel Moderno Brasileiro", Organized by Alberto Vicente e Marcelo Vasconcellos, Published by Olhares, .406 and p.410-411. "Móvel Brasileiro Moderno", Organized by Marcelo Vasconcellos e Maria Lúcia Braga, Published by Aeroplano, p.72-73.

Oscar Niemeyer made modernist architecture sexy. In his signature designs, such as those for the planned capital city of Brasília, Niemeyer created a distinctively buoyant architectural vocabulary of sweeping curves, flowing lines and organic forms. As expressions of faith in the power of modern architecture and design to foster progress, Niemeyer’s buildings have a kind of heroic poetry.


Oscar Ribeiro de Almeida Niemeyer Soares Filho was born to an upper-middle-class family in Rio de Janeiro. (His father was a graphic designer.) While in graduate school, Niemeyer began working for Lúcio Costa, one of the few modernist architects working in Brazil in the 1930s. Niemeyer would be assigned to the design team for a new building in Rio for the Ministry of Education and Health. The famed Swiss-born French architect Le Corbusier was hired as a consultant on the project, and through him Niemeyer would absorb many lessons in bringing a sense of structural lightness to large buildings — though he would never embrace the geometric forms espoused by Le Corbusier and the members of the Bauhaus.


“I am not attracted to straight angles or to the straight line, hard and inflexible, created by man,” Niemeyer would write in his memoirs. “I am attracted to free-flowing sensual curves.” Nowhere would Niemeyer demonstrate his love of curvature more expressively and elegantly than in his designs for the principal buildings for Brasília, a project begun in 1956. The dramatic Congressional Palace features two stark towers flanked by a domed structure and a bowl-shaped edifice, for the upper and lower legislative houses. He placed the Palácio da Alvorada (the presidential residence) on a small peninsula jutting into a lake, so that the sequence of parabolic columns on its facade casts a mirror image on the water. Niemeyer’s grandest achievement was the city’s cathedral, a stunning composition of 16 arced vertical supports with tinted-glass interstices.


Four years after Brasília was completed, in 1960, Brazil’s elected government was overthrown in a military coup. Niemeyer, a member of the Communist party, was harassed continually by the junta. He left the country and did not return until democracy was restored, in 1985. While in exile, in the early 1970s, Niemeyer began collaborating on furniture designs with his daughter, Anna Maria Niemeyer. Their best known pieces, the Alta lounge chair and ottoman and the Rio rocking chaise, have flowing bases made of sheets of lacquered wood or stainless steel, share the aesthetics of Niemeyer’s architecture. The Alta’s deep, oversized seat pads nod — much like the chair designs of Niemeyer’s countryman Sergio Rodrigues — to the Brazilian penchant for long, languorous conversations. Examples of both designs are priced at about $20,000, depending on age, condition and materials. As you will see on these pages, Oscar Niemeyer’s furniture designs are sleek, sculptural, comfortable and elegant — as well as a compact emblem of the work of one of the great architects of our time.

No Reviews Yet
Vetted
1stdibs seller since 2017
Typical response time: <1 hour
Located in Miami, FL
More From This Seller