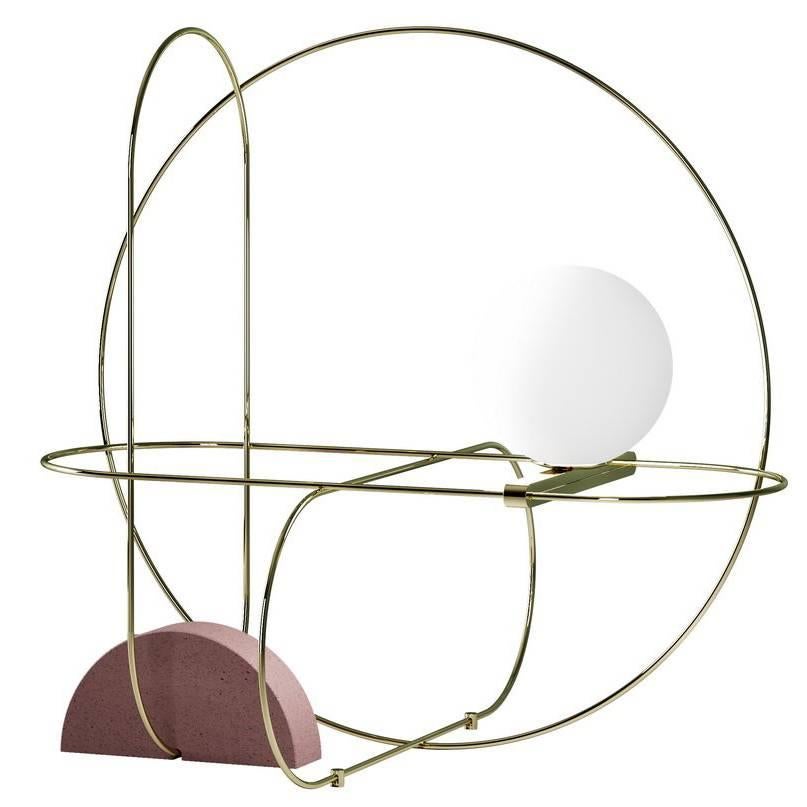 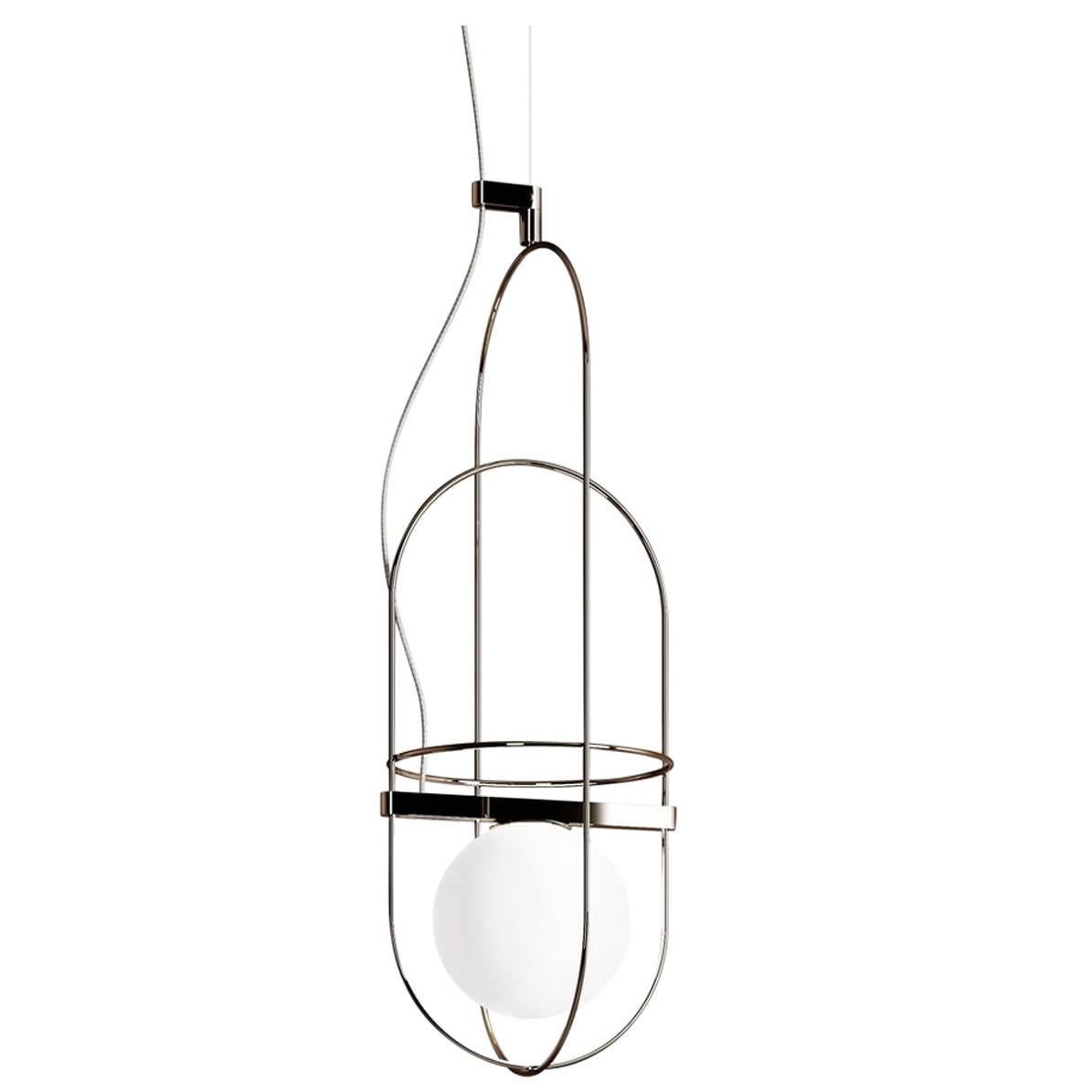 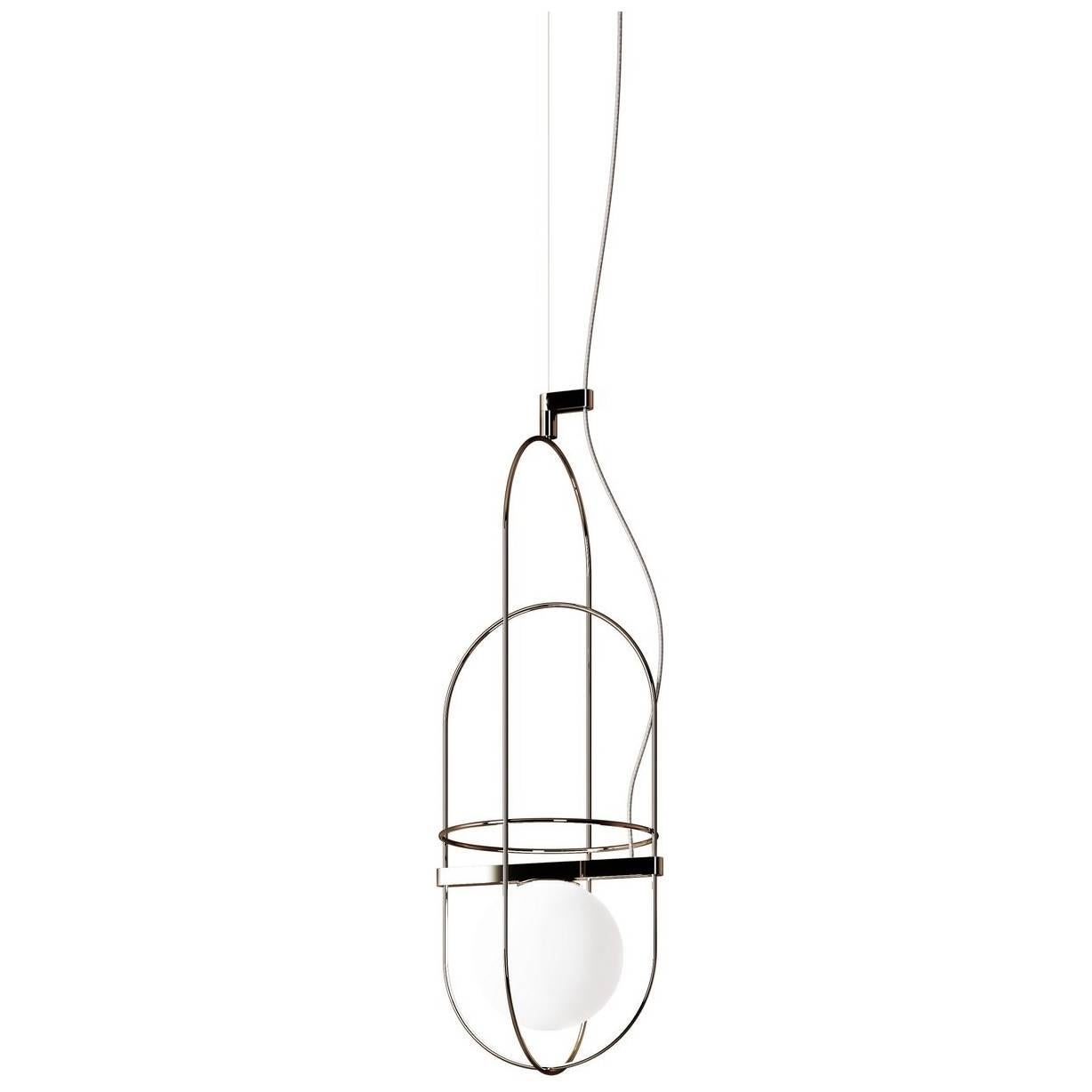 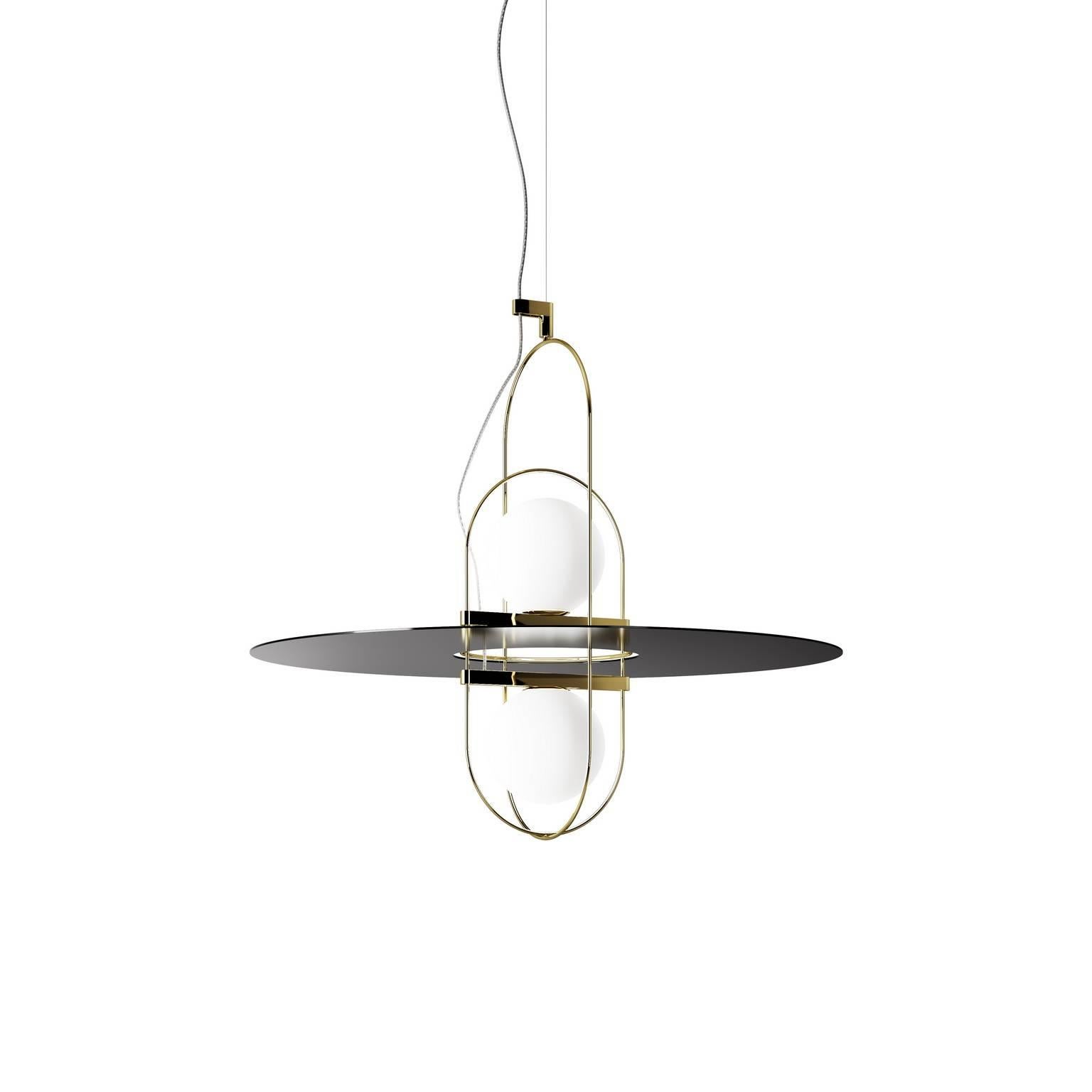 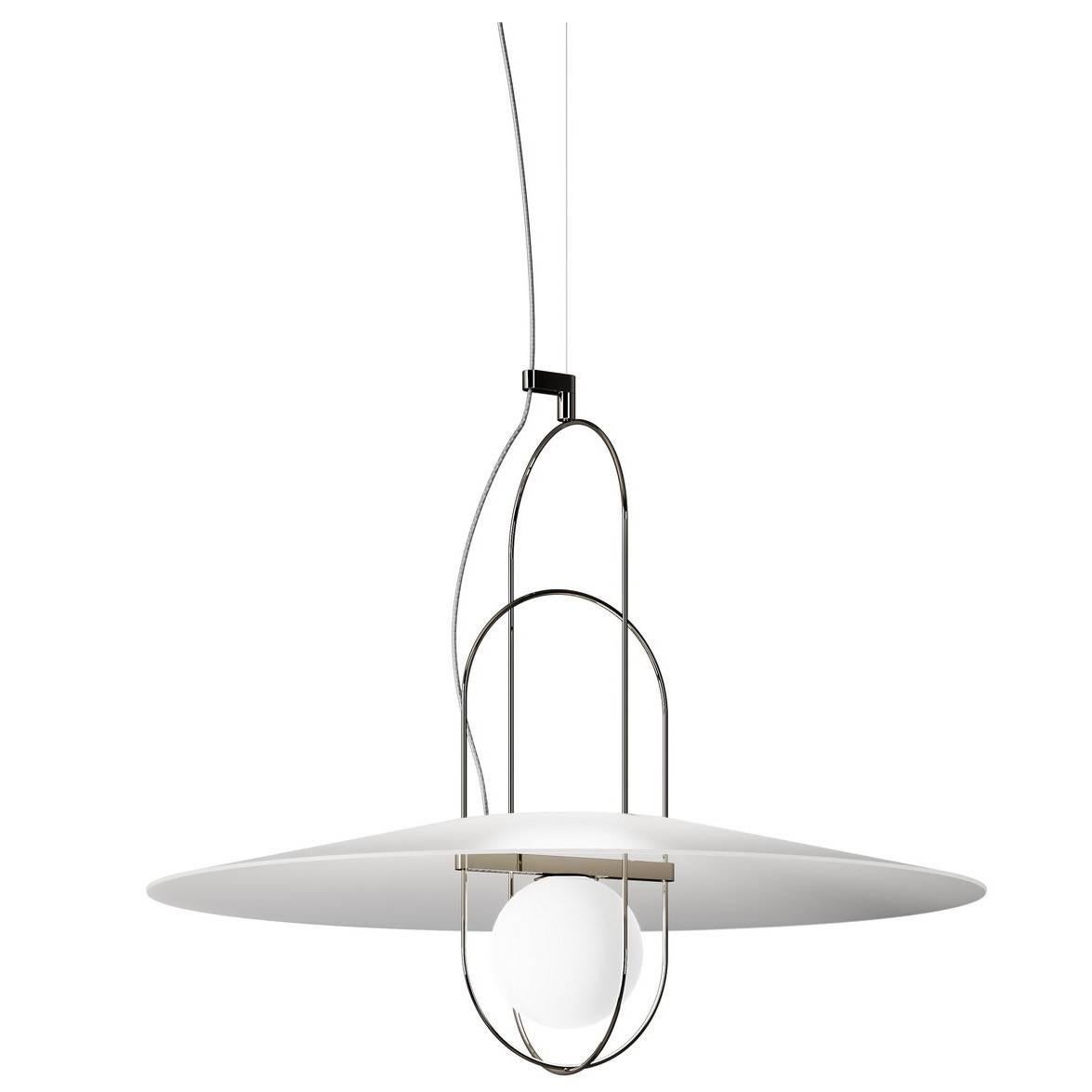 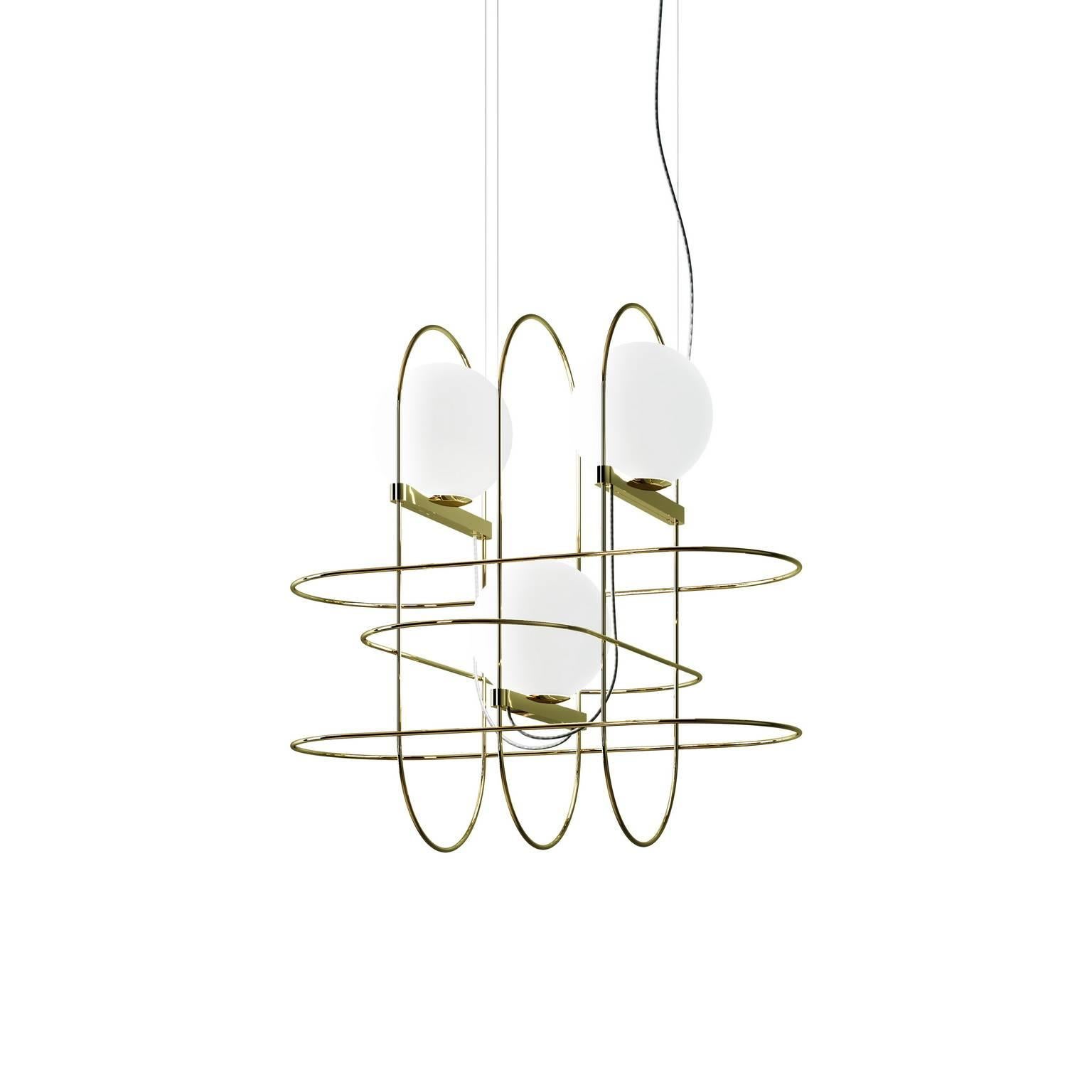 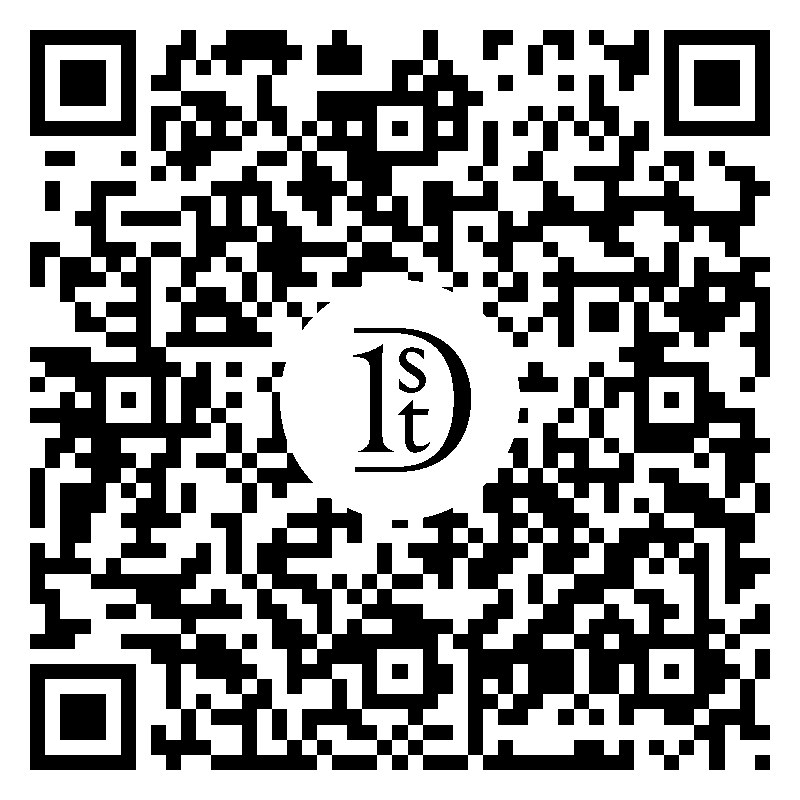 "Setareh" is a table lamp, designed by Francesco Librizzi and manufactured by Fontana Arte, featuring a structure in gold or chromed metal and a sphere in white satin blown glass. The suspended version comes bare or with a white or black lampshade or a metal disc. In the table version the base is in gray or red mineral. It's provided with a dimmer and lighting source is 6W LED (2700K, CRI>80, Lumen 830). Dimensions: Ø 17.7", H 23.8" "Setareh" is the name of the collection of lighting elements that Francesco Librizzi, a young Sicilian architect working in Milan, designed for the first time for FontanaArte. "Setareh" concept comes from the idea of giving form to light. The lamp is composed of a sphere in hand-blown white satin glass, magically suspended within a thin metal structure. The play of circular masses and trajectories generates a balanced design of gravitational dynamics. The light from the sphere is diffused into the surrounding space, illuminating the frame. The reflections of the metal makes the luminous field visible, its space influenced by light and its aura. The result is a collection of lighting elements, available in tabletop and suspended versions, having an extraordinary poetic grace. The suspended version comes in several variants: bare, with only the frame and glass sphere (also available with three spheres), with a diffuser in curved white glass (diameter 17.7", 25.6", 33.5"), or with a painted metal disc in white or black (diameter 17.7", 25.6", 33.5", 39.4"). Francesco Librizzi Studio, founded in Milan in 2005, is involved in architecture, interior design, exhibition design. His projects explore the relationship between the existing architectural heritage and the construction of new spaces within it. Italian Pavilion at the XII Biennale of Architecture in Venice in 2010 and the Pavilion of Bahrain for the Biennale of 2012 are telling about such approach. The work on the essential features of the space is the basis of the projects for the Milan Triennale, as well as the exhibitions "Gino Sarfatti: il design della luce (2012), "Munari, percorsi a mezz’aria" for TDM6 (2013) and "D1" for "Rooms. New philosophies of living" exhibition (2016). Works realized over these years like Casa G, Abitare magazine n. 538 cover project, attracted the attention of a large public and critical success, gaining visibility on the international media such as Domus, Abitare, Lotus, Wallpaper, Dezeen. Among the awards he won: Prix Émile Hermès (2008), Honorable Mention Compasso d’Oro (2014), "AZ Awards 2015 Best Residential Interior", "Award Archmarathon 2015 Private Housing". Since 2008, Francesco Librizzi has collaborated with universities and design academies in Italy and abroad. He's currently a guest professor at the Master of Urban Vision and Architectural Design and at Master of Interior and Living Design at Domus Academy and at the Faculty of Architecture of Genoa.

Available with structure in gold or chromed metal, a sphere in white satin blown glass and the base in gray or red mineral. Please inquire for additional information. 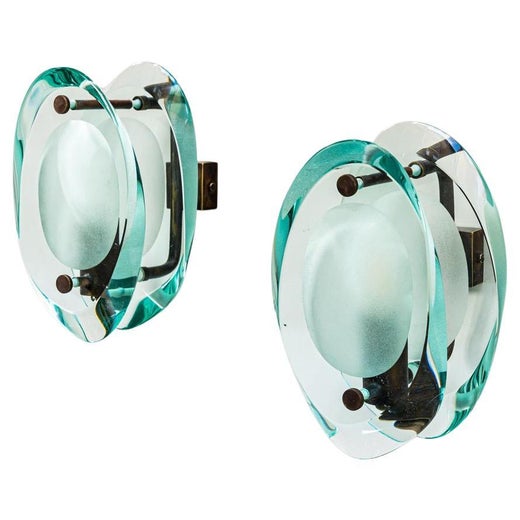 Best known for its elegant and innovative vintage lighting pieces, the Milan-based firm Fontana Arte pioneered one of the key features of 20th-century and contemporary Italian design: the union of artistry and industry wrought by partnerships between creative talents — chiefly architects — and entrepreneurial businesses. Fontana Arte is further distinguished by having had as artistic director, in succession, four of Italy’s most inventive modernist designers: Giò Ponti, Pietro Chiesa, French transplant Max Ingrand and Gae Aulenti.The bread and butter of the glassmaking company that Luigi Fontana founded in 1881 was plate-glass panels for the construction industry. In 1930, Fontana met Ponti — then the artistic director of the Richard-Ginori ceramics workshop and the editor of the influential magazine Domus— at a biannual design exhibition that became the precursor to today’s Milan Design Triennale, and the two hatched an idea for a furniture and housewares firm. Fontana Arte was incorporated in 1932 with Ponti as its chief of design. He contributed several lamps that remain among the company’s signature works, including the orb-atop-cone Bilia table lamp and the 0024 pendant — a stratified hanging sphere. The following year, Fontana Arte partnered with the influential Milan studio glassmaker and retailer Pietro Chiesa, who took over as artistic director. Chiesa’s designs for lighting — as well as for tables and items including vases and ashtrays — express an appreciation for fluidity and simplicity of line, as seen in works such as his flute-shaped Luminator floor lamp and the 1932 Fontana table — an arched sheet of glass that is held in the permanent collection of the Museum of Modern Art. Six years after Chiesa’s 1948 death, the École des Beaux Arts–trained Max Ingrand took over as head of design at Fontana Arte. Ingrand brought a similarly expressive formal sensibility to wares such as lamps and mirrors, but he also had a masterful eye for the manipulation of glass surfaces — whether they be cut, frosted, acid-etched or sand-blasted. His classic design is the Fontana table lamp of 1954, which has a truncated cone shade and curved body, both of which are made of pure, chic white-frosted glass. Following Ingrand, the often-audacious Italian architect Gae Aulenti served as the company’s artistic director from 1979 to 1996, and while she generally insisted that furnishings take second place aesthetically to architecture, she made an exception for Fontana Arte pieces such as the Tavolo con Ruote series of glass coffee and dining tables on wheels, bold lighting pieces such as the Parola series and the Giova, a combination flower vase and table lamp. As a key incubator of modern design under Aulenti’s tenure, Fontana Arte remained true to its long-held commitment — creating objects that have never been less than daring.
About the Seller
4.8 / 5
Located in New York, NY

Founded in 2015 by Patrizio Chiarparini, this New York furniture gallery is a precious resource for interior designers, architects and collectors. Chiarparini takes a curatorial approach, informed by a well-honed fashion and design sensibility, to selecting the distinctive pieces from master artisans, groundbreaking contemporary design...

Diamond Seller
These expertly vetted sellers are 1stDibs' most experienced sellers and are rated highest by our customers.
1stDibs seller since 2015
1,456 sales on 1stDibs
Typical response time: 3 hours
More From This Seller

With "A New Breed," we showcased exceptional pieces by rising talents, a rapidly growing area of strength among 1stdibs' many offerings.

The Campana Brothers Put São Paulo on the Design Map, by Smashing All the Rules