Pair of 'Lola' Brass and Metal Adjustable Sconces in White 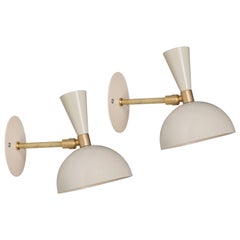 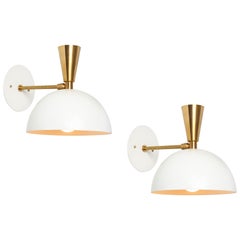 Pair of Large 'Lola II' Sconces in Black and White 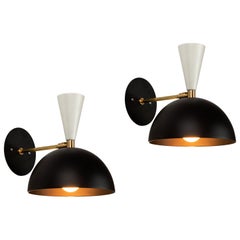 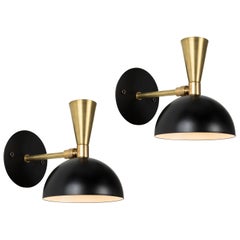 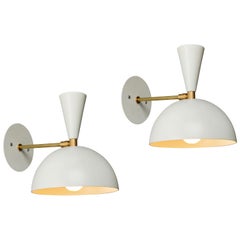 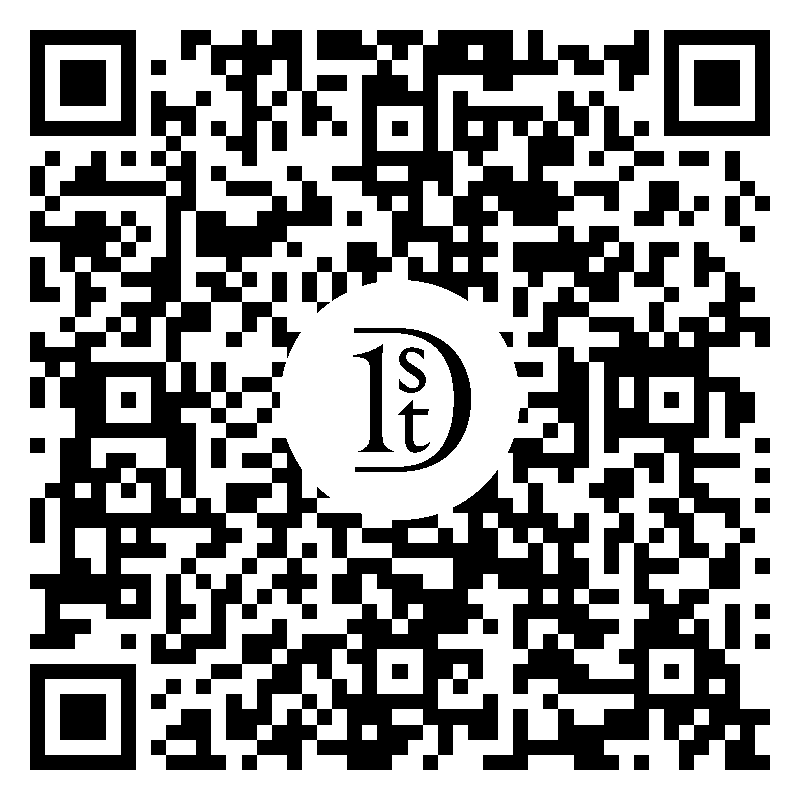 'Nena' table lamp in white metal and wood by Alvaro Benitez. Hand-fabricated by Los Angeles based designer and lighting professional Alvaro Benitez, these highly refined table lamps are reminiscent of the iconic midcentury Italian designs of Arteluce and Stilnovo. Executed in white powder-coated metal and black painted wood with brass hardware. Price is per item. Also available in a white/black model as well as custom RAL colors upon request for an additional fee. 4 lamps in stock. Available in unlimited quantities. Out of stock lead-time 2-3 weeks. Can take 4-6 weeks or more. For time sensitive orders, please inquire prior to purchasing. All sales are final. Not UL listed, but recommended UL listing possible from authorized 3rd party vendor upon request for an additional fee.

Available in black or white or black/white combinations. Custom RAL colors available upon request for an additional fee.

The lighting maker Arteluce was one of the companies at the heart of the creative explosion in postwar Italian design. The firm’s founder and guiding spirit, Gino Sarfatti (1912–85), was an incessant technical and stylistic innovator who almost single-handedly reinvented the chandelier as a modernist lighting form.

Sarfatti attended the University of Genoa to study aeronautical engineering but was forced to drop out when his father’s company went out of business. His mechanical instincts led him to turn his attention to lighting design — and he founded Arteluce as a small workshop in Milan in 1939. Sarfatti’s father was a Jew, so the family fled to Switzerland in 1943, but after the war — largely thanks to Sarfatti’s insistence on efficiency of design and manufacture — Arteluce quickly established itself as a top firm. Though Sarfatti continued as chief designer through the 1950s and ’60s, he also enlisted other designers such as Franco Albini and Massimo Vignelli to contribute work. Sarfatti sold Arteluce to FLOS — a rival Italian lighting maker — in 1973 and retired to pursue a more traditional avocation: collecting and dealing rare postage stamps.

Sarfatti is regarded by many collectors as a pioneer of minimalist design. He pared down his lighting works to their essentials, focusing on practical aspects such as flexibility of use. His most famous light, the 2097 chandelier, is a brilliant example of reductive modernist design, featuring a central cylinder from which branches numerous supporting fixtures extending like spokes on a wheel. Similarly, his 566 table lamp is a simple canister, able to be raised or lowered on a stem, holding a half-chrome bulb. Despite the marked functionality of his designs, Sarfatti did have a sprightly side: His 534 table lamp, with its cluster of rounded enameled shades, resembles a vase full of flowers, the Sputnik chandelier (model 2003) was inspired by fireworks and the brightly colored plastic disks of the 2072 chandelier look like lollipops. No matter the style, Sarfatti concentrated first and foremost on the character of light created — and any Arteluce lamp is a modernist masterpiece.

About the Seller
5 / 5
Located in Glendale, CA
Platinum Seller
This distinction is for experienced sellers who continually surpass customer expectations.
Established in 2012
1stDibs seller since 2015
712 sales on 1stDibs
Typical response time: <1 hour
More From This Seller
View All From Seller

$1,400 / item
French Table Lamp Midcentury in Wood and Metal from 1950
Located in Milano, IT
Category

French Table Lamp Midcentury in Wood and Metal from 1950