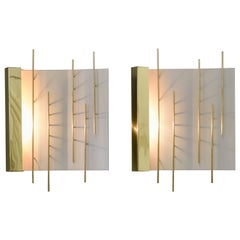 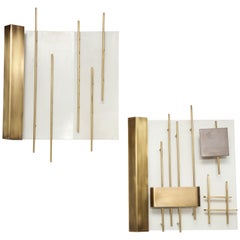 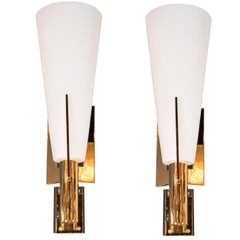 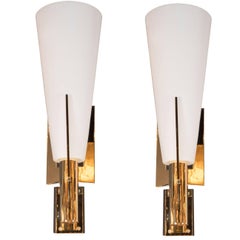 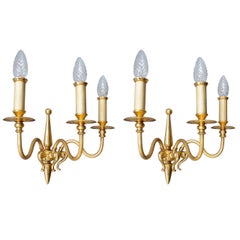 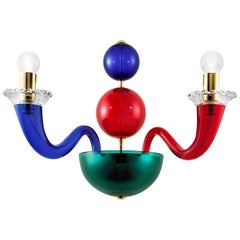 HomeFurnitureLightingWall Lights and Sconces
1 of 10 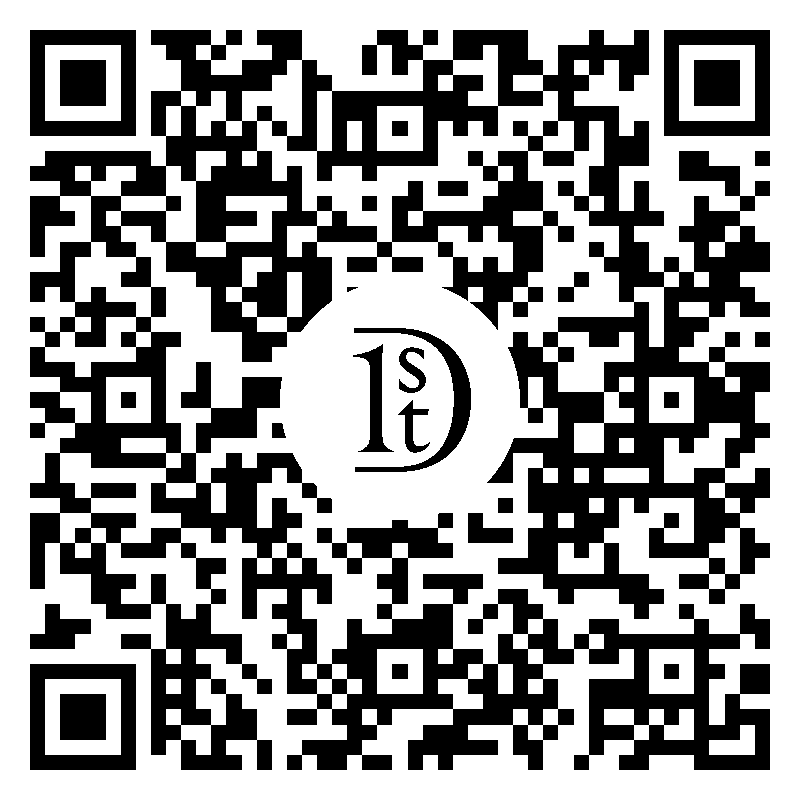 Elegant square wall sconces by the one of the famous designer and architect from Italy. Very graphic lamps in brass and metal lacquered. The light hidden on the left side creates play of light on the lamp and wall. Signed with applied brass manufacturer's label to reverse of each example 'Lumi'. Free shipping worldwide Shipping with care and love Bibliography Domus, 1960-1964, Tome V, Édition Taschen, 2006, p. 240. Ugo la Pietra, “Gio Ponti”, Rizzoli, Milan, 2009, p. 344.

An architect, furniture and industrial designer and editor, Gio Ponti was arguably the most influential figure in 20th-century Italian Modernism. Ponti designed thousands of furnishings and products — from cabinets, lamps and chairs to ceramics and coffeemakers — and his buildings, including the brawny Pirelli Tower (1956) in his native Milan, and the castle-like Denver Art Museum (1971), were erected in 14 countries. Through Domus, the magazine he founded in 1928, Ponti brought attention to virtually every significant movement and creator in the spheres of modern art and design.

The questing intelligence Ponti brought to Domus is reflected in his work: as protean as he was prolific, Ponti’s style can’t be pegged to a specific genre. In the 1920s, as artistic director for the Tuscan porcelain maker Richard Ginori, he fused old and new; his ceramic forms were modern, but decorated with motifs from Roman antiquity. In pre-war Italy, modernist design was encouraged, and after the conflict, Ponti — along with designers such as Carlo Mollino, Franco Albini, Marco Zanuso — found a receptive audience for their novel, idiosyncratic work. Ponti’s typical furniture forms from the period, such as the wedge-shaped “Distex” chair, are simple, gently angular, and colorful; equally elegant and functional. In the 1960s and ’70s, Ponti’s style evolved again as he explored biomorphic shapes, and embraced the expressive, experimental designs of Ettore Sottsass Jr., Joe Columbo and others.

His signature furniture piece — the one by which he is represented in the collections of the Museum of Modern Art in New York, Germany’s Vitra Design Museum and elsewhere — is the sleek “Superleggera” chair, produced by Cassina starting in 1957. (The name translates as “superlightweight” — advertisements featured a model lifting it with one finger.) Ponti had a playful side, best shown in a collaboration he began in the late 1940s with the graphic artist Piero Fornasetti. Ponti furnishings were decorated with bright finishes and Fornasetti's whimsical lithographic transfer prints of things such as butterflies, birds or flowers; the Montreal Museum of Fine Arts possesses a 1950 secretary from their “Architetturra” series, which feature case pieces covered in images of building interiors and facades. The grandest project Ponti and Fornasetti undertook, however, lies on the floor of the Atlantic Ocean: the interiors of the luxury liner Andrea Doria, which sank in 1956.

Widely praised retrospectives at the Queens Museum of Art in 2001 and at the Design Museum London in 2002 sparked a renewed interest in Ponti among modern design aficionados. (Marco Romanelli’s monograph written for the London show, offers a fine overview of Ponti’s work.) Today, a wide array of Ponti’s designs are snapped up by savvy collectors who want to give their homes a touch of Italian panache and effortless chic.

5 / 5
Our team of world-class specialists approve every seller on 1stdibs.
This distinction is for experienced sellers who continually surpass customer expectations.
1stdibs seller since 2019
Typical response time: <1 hour
Located in Villeurbanne, FR

Table Lamp by Giannino Crippa for Lumi Milano, circa 1960