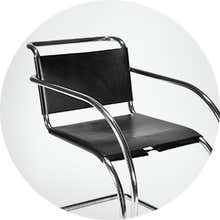 The Bauhaus was a progressive German art and design school founded by the architect Walter Gropius that operated from 1919 to 1933. The name Bauhaus is derived from the German verb bauen, “to build.” Under the school’s innovative curriculum, students were taught the fine arts, such as painting and sculpture, as well as practical skills like carpentry and metalworking. The goal of the Bauhaus was to erase the distinction between art and craft, while embracing the use of new technologies and materials.

The school moved from Weimar in 1925 to the city of Dessau, where it enjoyed its heyday under Gropius, then Hannes Meyer and Ludwig Mies van der Rohe. The period from 1932 to 1933 when it operated in Berlin under Mies was its final chapter. Despite its brief existence, the Bauhaus has had an enduring influence on art and design, and is regarded by many as the 20th century’s chief crucible of modernism. The faculty roster reads like a who’s who of modernist creative genius, and included such artists as Paul Klee, Wassily Kandinsky and László Moholy-Nagy along with architects and designers like Mies and Marcel Breuer.

Bauhaus design style reflects the tenets by which these creators worked: simplicity, clarity and function. They disdained superfluous ornament in favor of precise construction. The furniture of the Bauhaus and its followers married industrial and natural materials in simple, geometric forms. Seating pieces were made with tubular metal or molded plywood frames, and upholstered with leather or cane. Above all, as you can discern on 1stDibs, designs in the Bauhaus style offer aesthetic flexibility. They can be the elements of a wholly spare, minimalist space, the quiet foundation of an environment in which color and pattern come from one’s own collection of art and artifacts.

1960s Pendant Lamp by Napako, Czechoslovakia
Located in Praha, CZ
- Good original condition with minor signs of use - The lamp will be checked by electrician before shipping and in case of any problem newly rewired - Works in US.
Category

Two-Tone Bauhaus Pendant, Germany, Circa 1930, One

Bauhaus Art Deco Style Pendant Lamp "Zwadela" Chandelier Pendant, Re-Edition
By Woka Lamps, Bauhaus
Located in Vienna, AT
Uplighter which gives as well as downlight, mirroring shade, several versions. Total drop custom made! All components according to the UL regulations, with an additional charge we ...
Category

Bauhaus Nickel-Plated Chandelier, 1930´s, Bohemia
Located in Prague 8, CZ
This Bauhaus nickel-plated chandelier was made in the former Czechoslovakia in the 1930´s. It has seven round glass plates. In excellent condition. New wiring. It has seven E14...
Category

Luzette Pendant Light by Peter Behrens for Siemens, circa 1920s

Four Extra Large Brass Chandeliers by Kaiser & Co, Made in Germany circa 1940s

Extra Large Brass Chandelier by Kaiser & Co., Made in Germany, circa 1940s