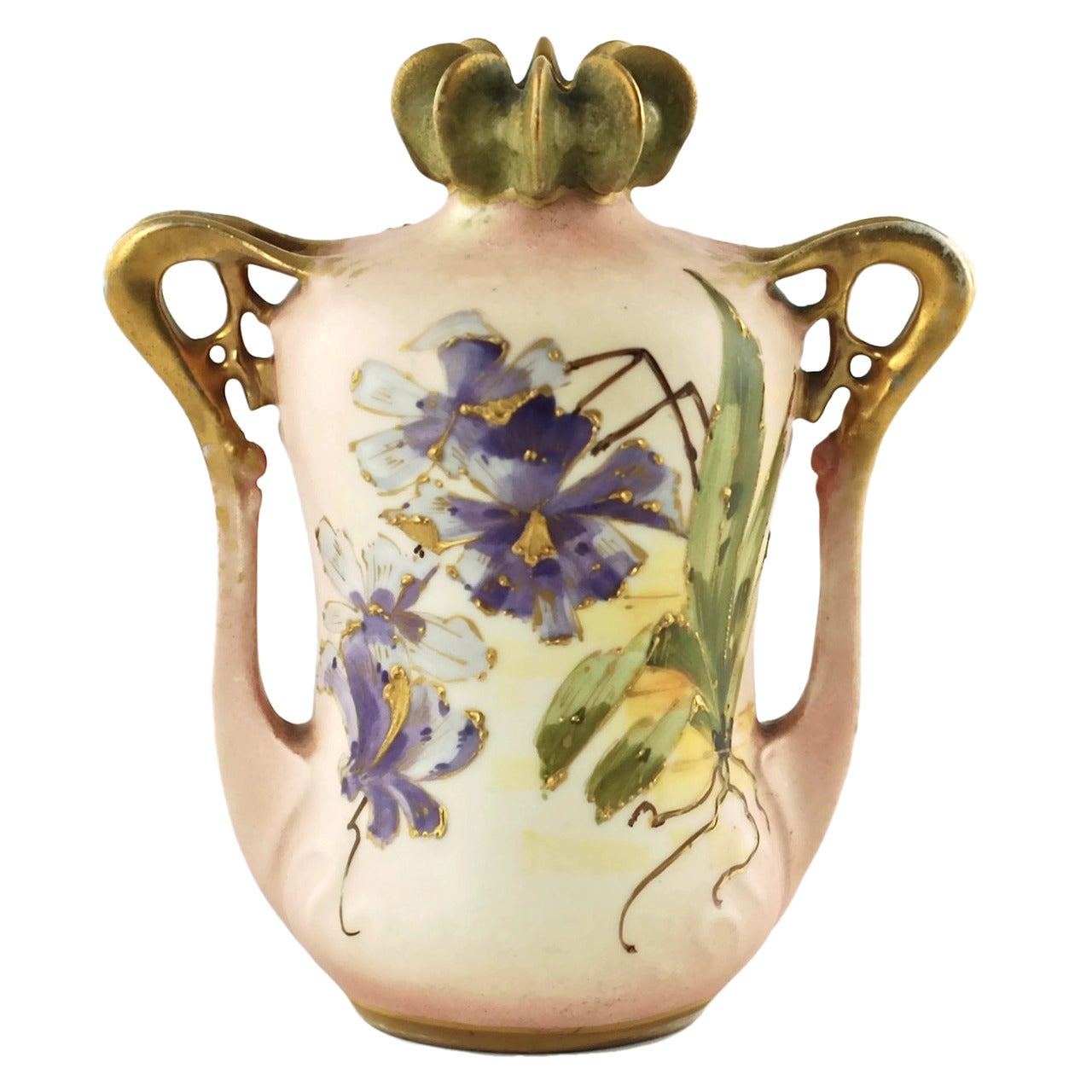 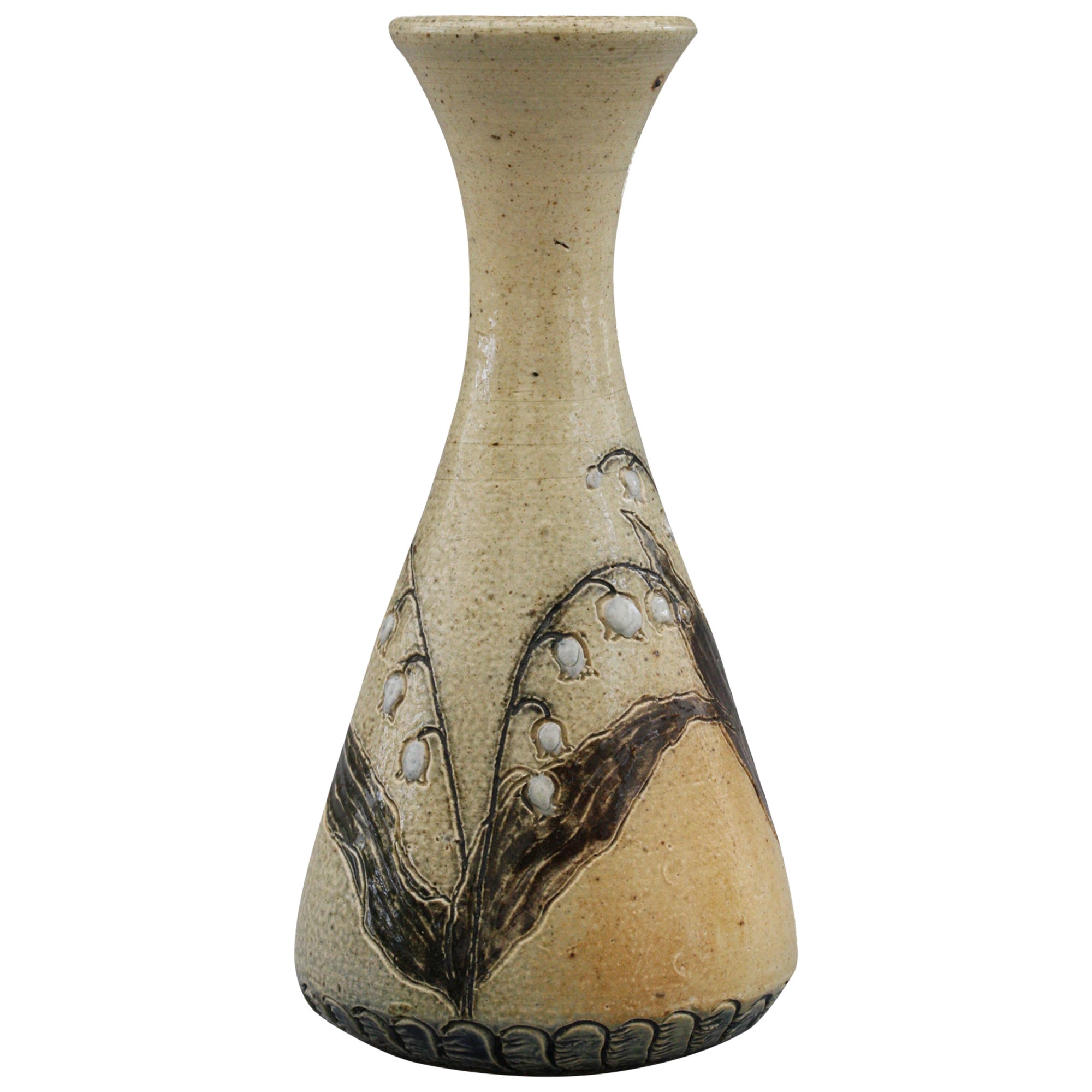 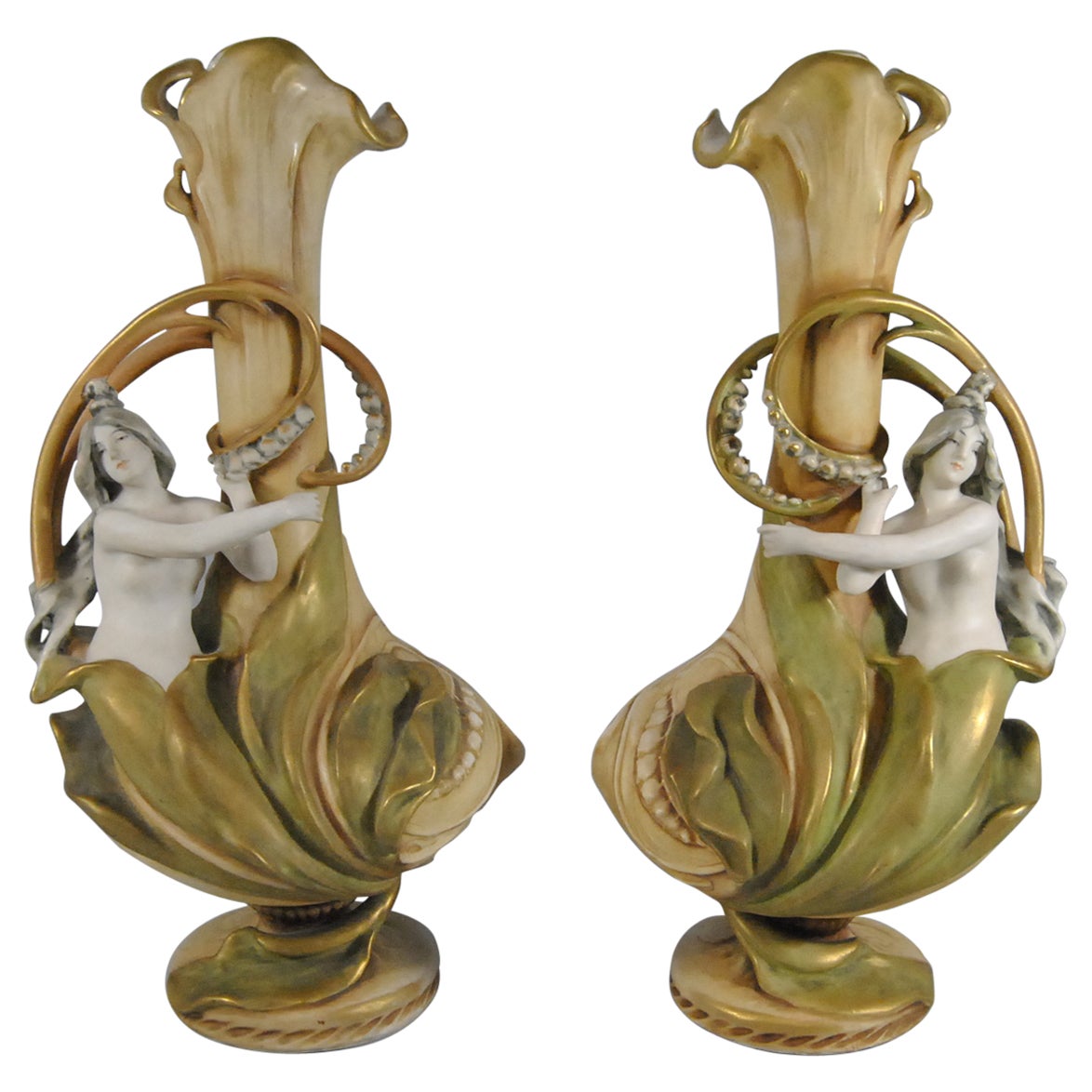 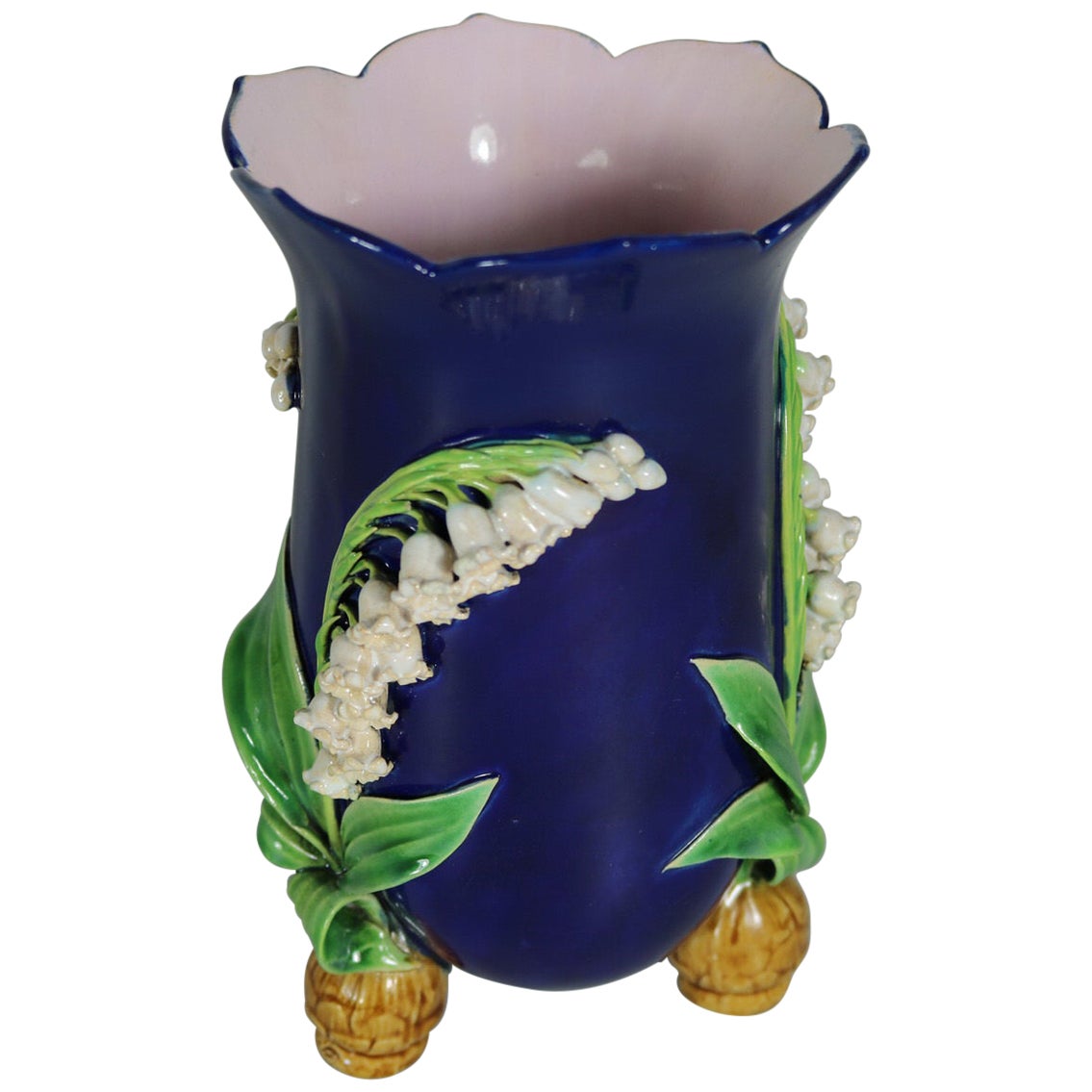 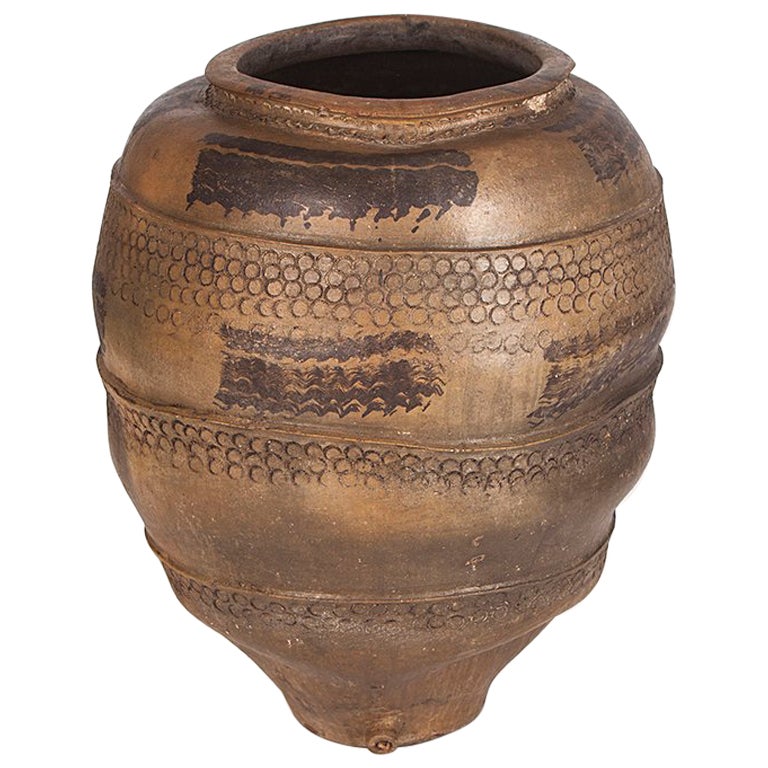 This late 19th century porcelain vase was designed by Eduard Stellmacher for Riessner, Stellmacher & Kessel Amphora of Turn-Teplitz, Bohemia. The piece has a Classic Art Nouveau form and features a dimensional nymph partially encased in the leaves of a lily of the valley plant. The maiden's body is accented by two delicate arched tendrils finished in gilt which bear small white lily of the valley blossoms, also accented in gilt. The remainder of the piece is painted in shades of light green and ochre with gilt highlights. An example of this shape with similar painted decoration can be seen on page 37 of Richard L. Scott's 'Ceramics From The House Of Amphora 1890-1915.' As an antique item, the vase shows appropriate signs of age consisting of wear to the gilded decoration along with a shallow chip on one of the ridged leaves on the back of the piece. The foot is 4" in diameter and bears the red RStK mark reading "RStK TURN Teplitz Bohemia" with the designation "Made in Austria" along with an impressed mark reading "Amphora". There are also impressed numbers present reading "749" and "4". This hand-painted Eduard Stellmacher Amphora vase displays beautifully and would be a Fine addition to a collection of Art Nouveau ceramics. A distinctive piece.

Jugendstil—the Germanic name for the sinuous, ethereal design style best known as Art Nouveau—rarely found better expression in ceramics that at the kilns of Amphora. In 1892, Austrian potter Alfred Stellmacher and four relatives opened a workshop that produced earthenware featuring plants, animals, mythical creatures, simulated jewels and even portraits in the style of Gustav Klimt and other fashionable painters of the era. Each piece was signed Amphora. The factory also produced ewers, bowls, tureens, and other diverse shapes. Located in the former spa resort town of Turn-Teplitz (now part of the Czech Republic), the Amphora factory took advantage of the abundant kaolin in the local riverbeds—as well as the energy produced by the rivers themselves—in manufacturing their arresting wares.

Amphora pieces were painstakingly produced via a method that included detailed sketches, intricate carving and molding and luminous iridescent glazing. All culminated with repeated firings of the clay—sometimes as many as ten times. As a result, the firm won worldwide acclaim, taking gold medals at the Chicago and St. Louis World’s Fairs. Its wares were sold by luxury emporiums like Tiffany & Co.

Collectors prize Amphora vases for their delicate, naturalistic designs, and larger pieces often command prices in the tens of thousands. Equally sought after are portrait busts featuring religious, literary and allegorical themes. If you’re mourning the end of Downton Abbey and you’d like to add a dash of Lady Edith’s bohemian flair to your home, an Amphora vase or bowl will serve as a unique conversation piece.

About the Seller
4.9 / 5
Located in Cincinnati, OH
Platinum Seller
These expertly vetted sellers are 1stDibs' most experienced sellers and are rated highest by our customers.
Established in 2011
1stDibs seller since 2015
80 sales on 1stDibs
Typical response time: <1 hour
More From This Seller
View All From Seller

$3,129
Terracotta Amphora, 19th Century
Located in Wien, AT
These antique amphoras were used in Southern Europe during the 19th century for wine or oil. Excellent condition! Dimensions: diameter above – 15.74 middle- 31.49 below - 11.81.
Category

$1,250
Pair of French 19th Century Gilt-Brass Lily Vases
Located in Baton Rouge, LA
This beautiful pair of ecclesiastical gilt-brass lily vases, circa 1890, have removable rose-colored glass inserts. These were discovered in a church in the French countryside. They ...
Category