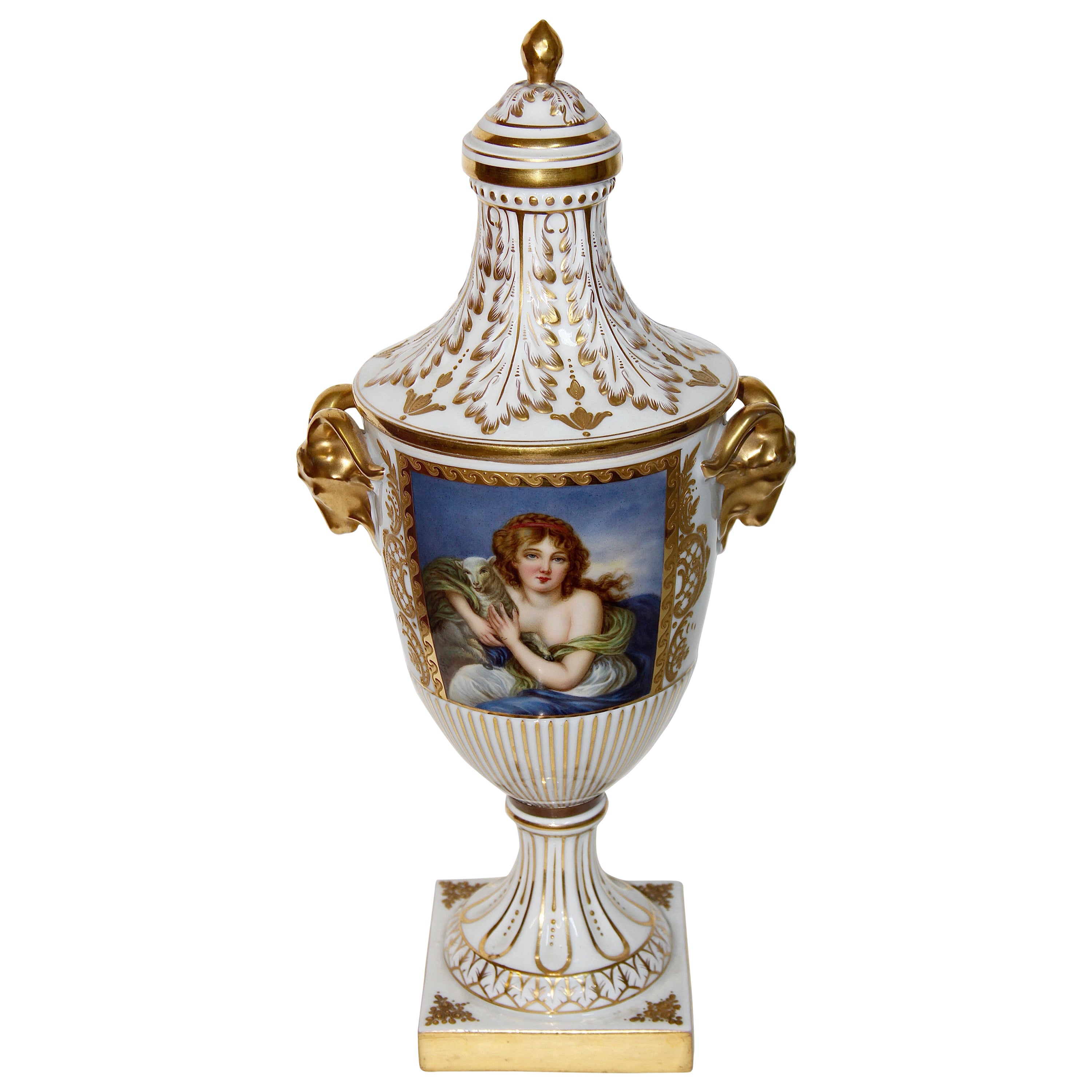 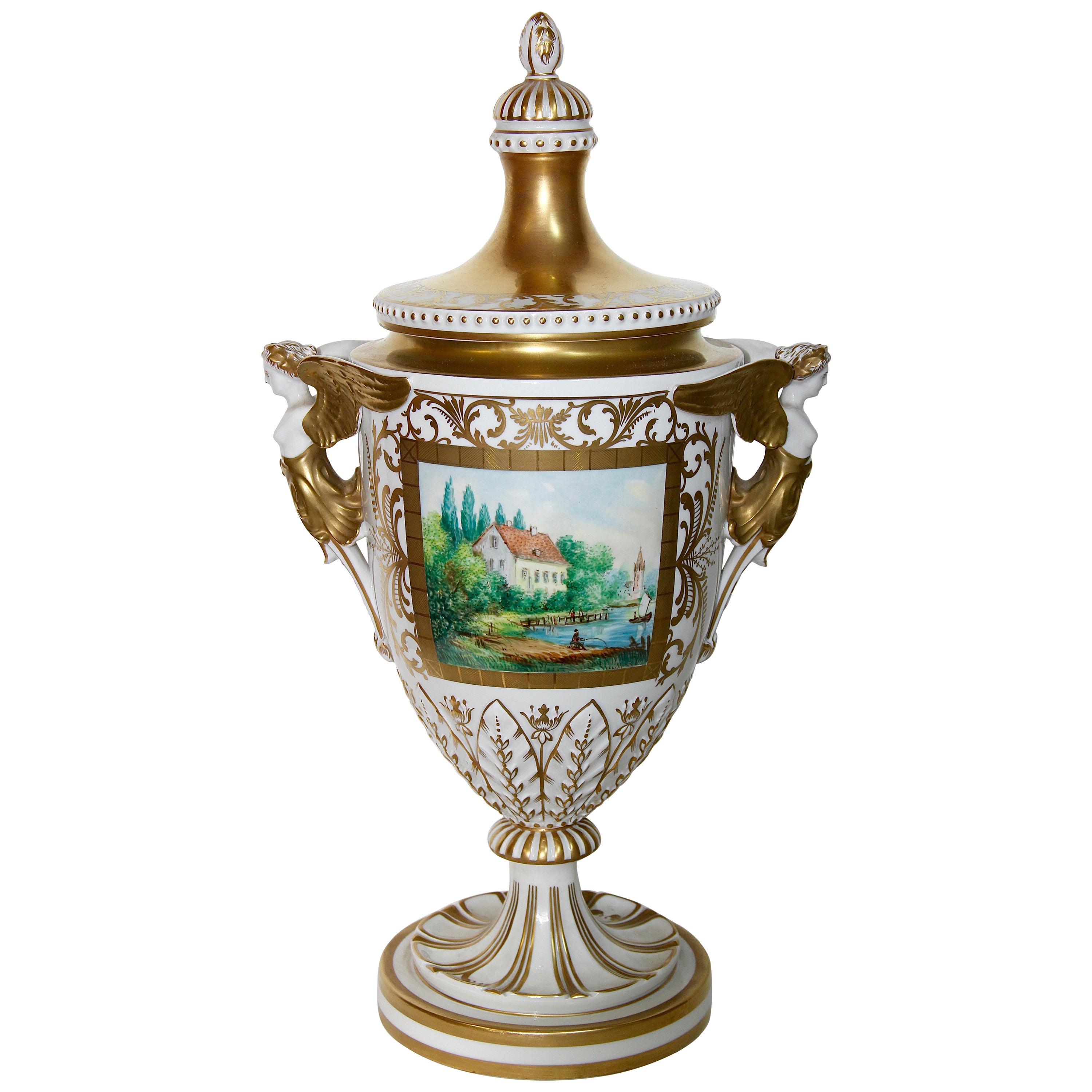 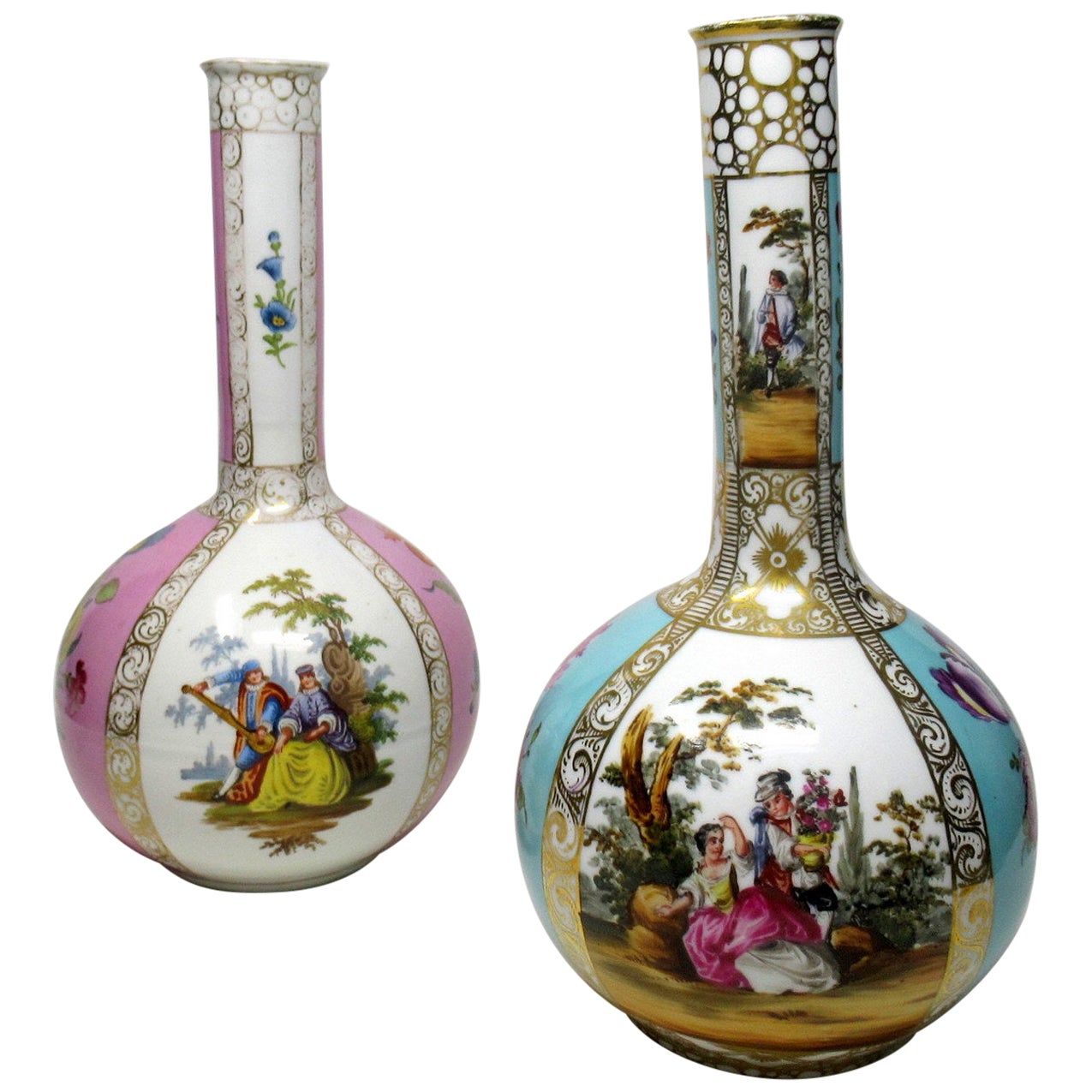 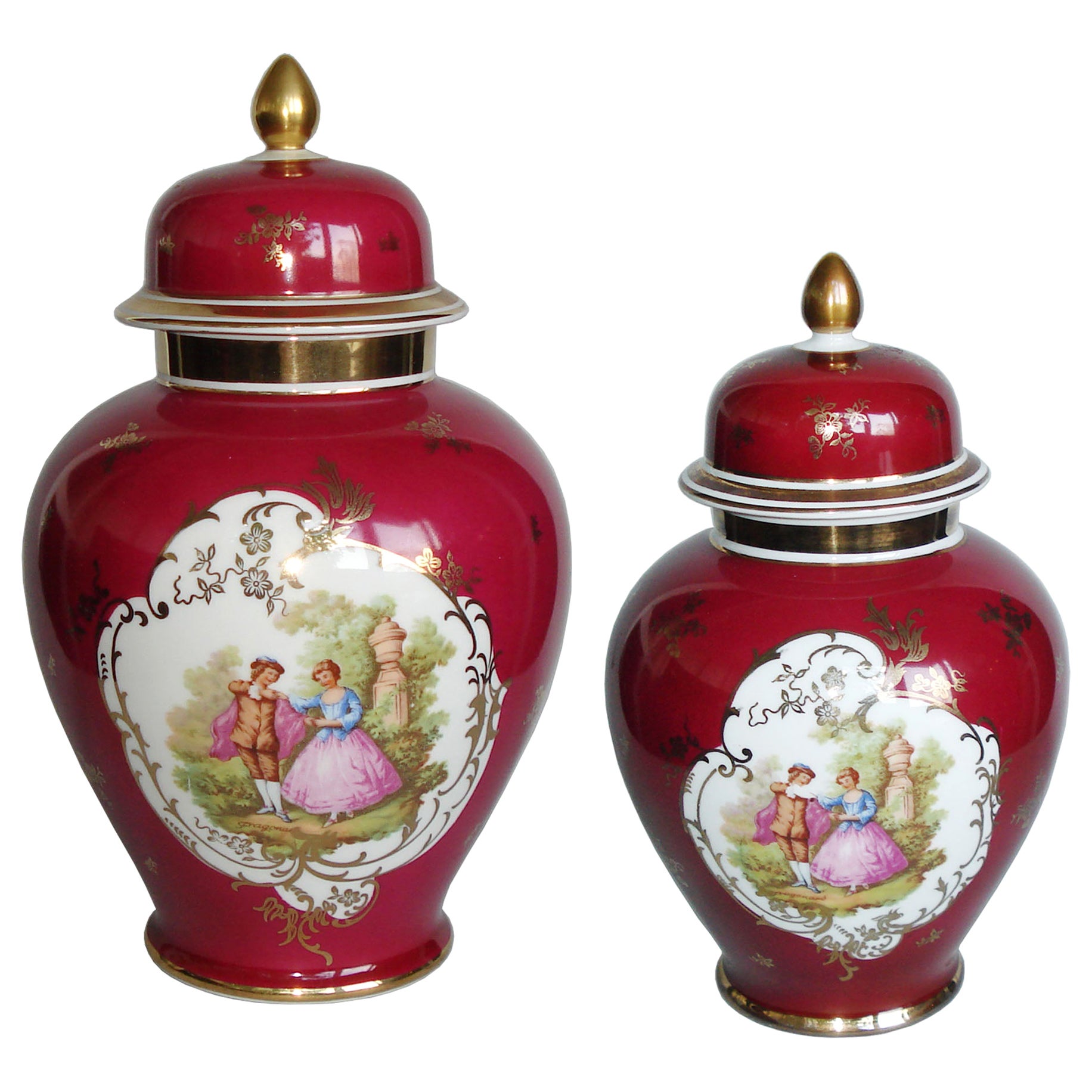 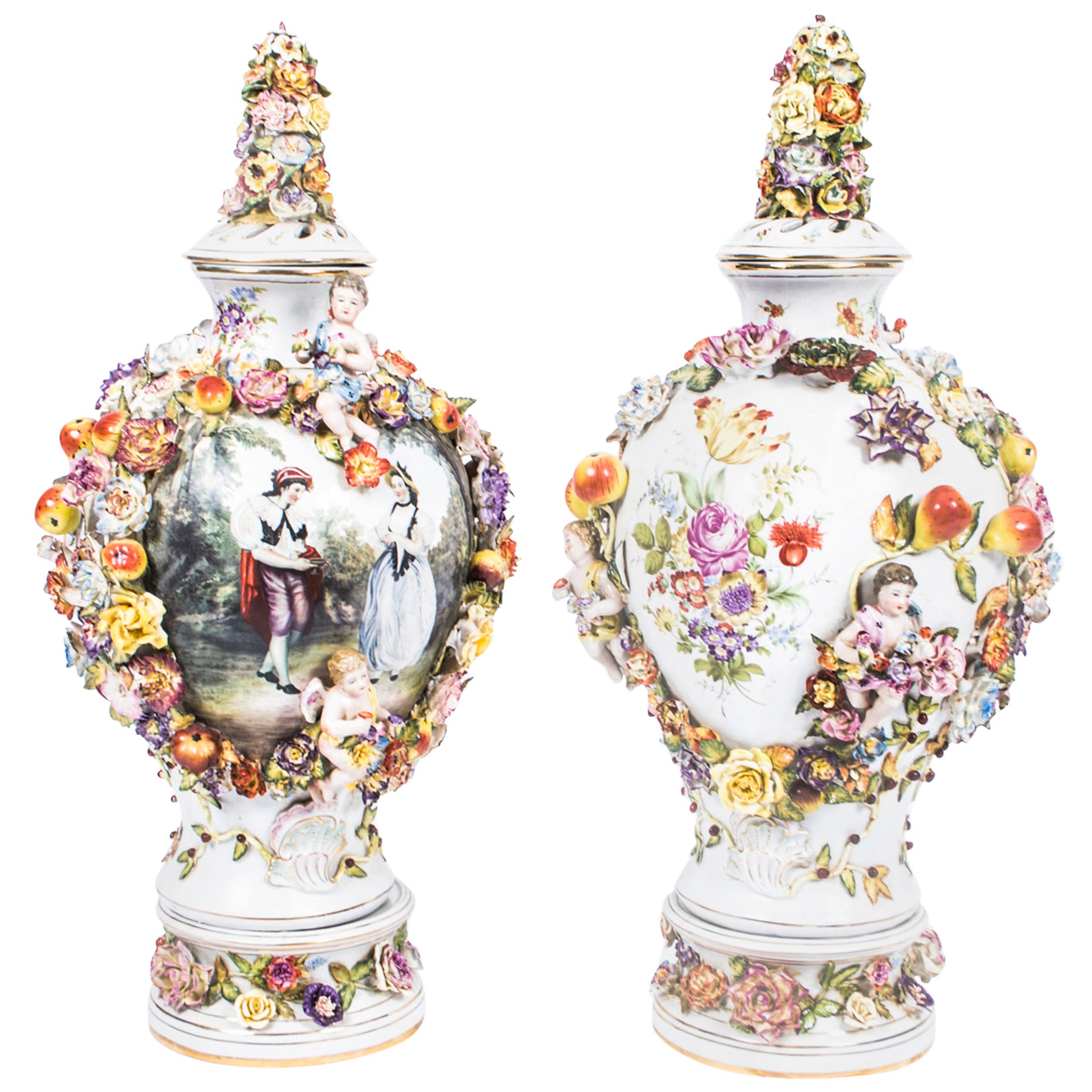 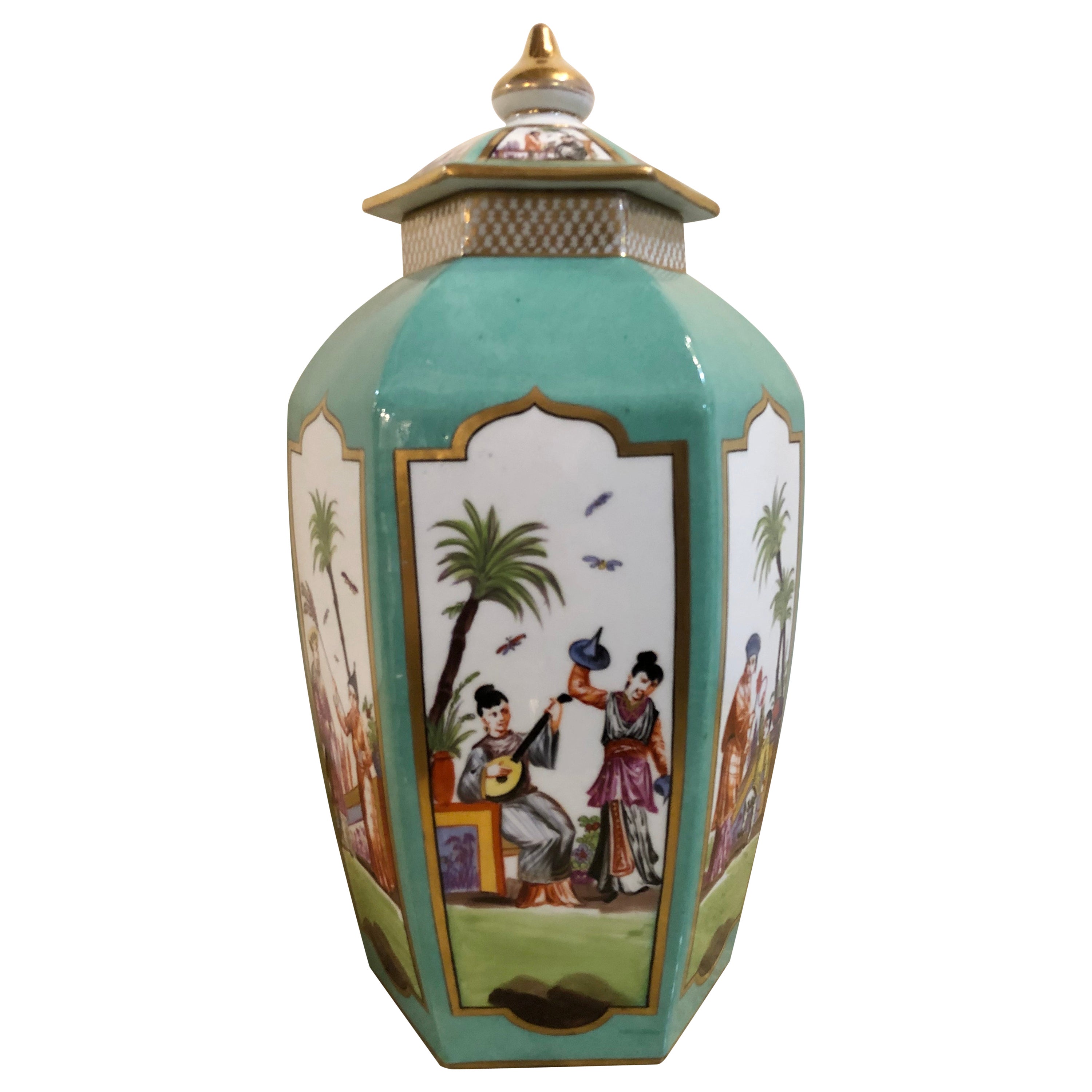 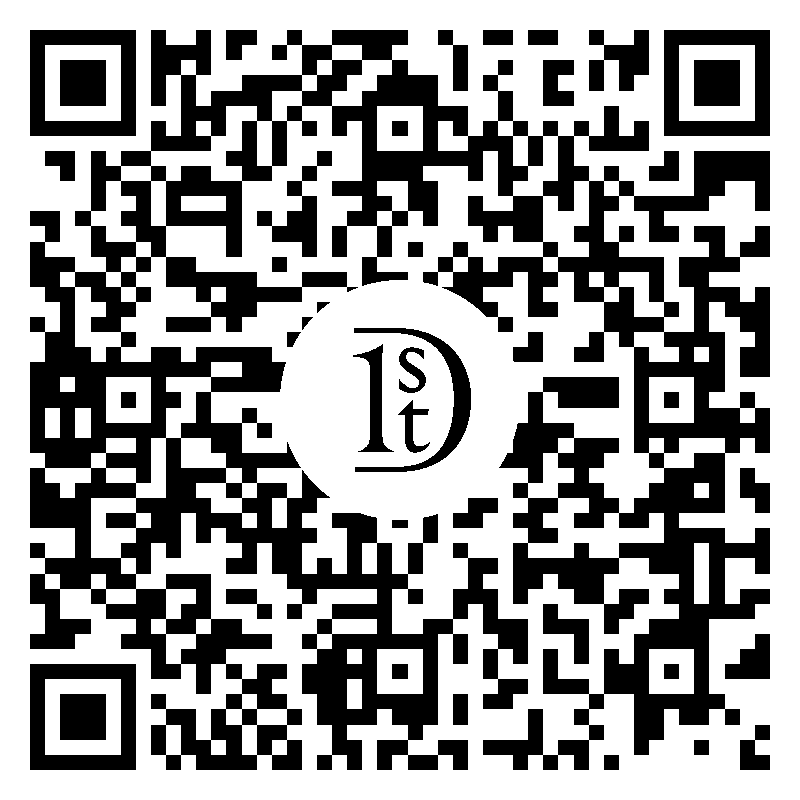 An impressive Dresden hand painted floral and gilt appointed ram's head urn. A gilt final topped on the pierced lid. The body is expertly hand decorated with gilt accents, floral swags and bouquets. All hand painted to perfection. The urn resting on a beautifully decorated pedestal base. Rams heads on each side as handles. The cobalt under glaze Dresden mark represents the "Carl Thieme" mark. This pair is a near pair, almost identical with slight differences due to the Artist liberty of painting one at a time. Measures: 15.5" tall, 9" wide, 7" deep.

Dresden porcelain, as a term, is the subject of some confusion. In some contexts, it refers to the hard-paste ceramic wares produced by the workshops that sprang up in and around the Saxon capital in the 19th century. In others, it denotes only the output of one of these, Sächsische Porzellanmanufaktur Dresden, known in English as simply Dresden Porcelain, which was established in 1872 in the city of Freital, Saxony. Complicating matters further, early publications about porcelain often used “Dresden” and “Meissen” interchangeably. It is true that the cities of Dresden and Meissen are connected through their long, shared history of decorative arts production and, in fact, most Meissen porcelain was sold in Dresden, the artistic and cultural center of Saxony. However, Meissen is the site of the factory that produced the first European porcelain, at the turn of the 18th century, while Dresden did not come into prominence until the mid-19th century, during the high point of the Rococo revival. And while Meissen is known for manufacturing porcelain, from clay models through finished product, Dresden is celebrated for its decorating studios, of which there were several dozen in and around the city during the 19th century. Their skilled painters often used “blanks” from Meissen as their canvases. So a piece of Dresden porcelain may have been formed and fired at Meissen, painted in Dresden, and ultimately sold in one of that city’s shops.

The figurines, plates and vases produced during the 19th century via this complex process remain appealing to this day, their bright hues and pastoral imagery typical of the Rococo revival, which brought scrollwork, shells, foliage, flowers and fruit back into vogue after decades of restrained Neo-Classicism and austere Gothic Revival design. Dresden figurines, which like their Meissen counterparts were inspired by the characters of the Commedia dell'Arte, have a witty, cheerful quality that has been likened to that of scenes painted by Watteau and Fragonard.

Before its near-total destruction during World War II, Dresden was home to more than 200 painting studios. The Dresden style, however is associated with wares bearing the blue crown mark (Meissen’s mark is a pair of cobalt blue crossed swords), which was first registered in 1883 by Richard Klemm, Donath & Co, Oswald Lorenz, and Adolph Hamann. Prominent painters from this period include Helena Wolfsohn, Franziska Hirsch, Ambrosius Lamm — whose skill in the application of metallic or lustre paints is on lavish display in this dinner service from the 1920s — and Carl Thieme, a master in floral painting, as demonstrated by his decoration on this circa 1901 ram’s head urn. Dresden painters also used a decorative technique known as “Dresden lace.” This involved dipping real lace into liquid porcelain and applying it to a figure, which was then fired in a kiln. The fabric would burn away, leaving a fragile, crinoline-like shell — the type of delicate and whimsical detail that characterizes Dresden porcelain, one of Europe’s great ceramic traditions.

About the Seller
4.9 / 5
Located in Lambertville, NJ
Platinum Seller
These expertly vetted sellers are 1stDibs' most experienced sellers and are rated highest by our customers.
Established in 1985
1stDibs seller since 2015
667 sales on 1stDibs
Typical response time: 1 hour
More From This Seller
View All From Seller