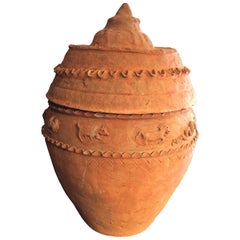 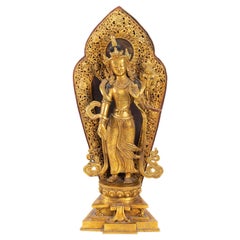 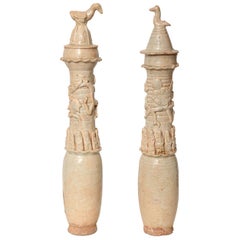 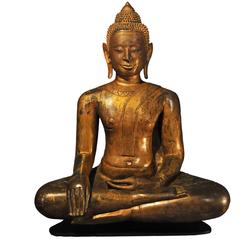 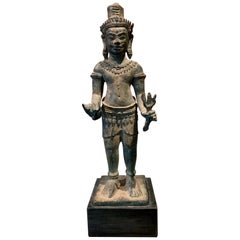 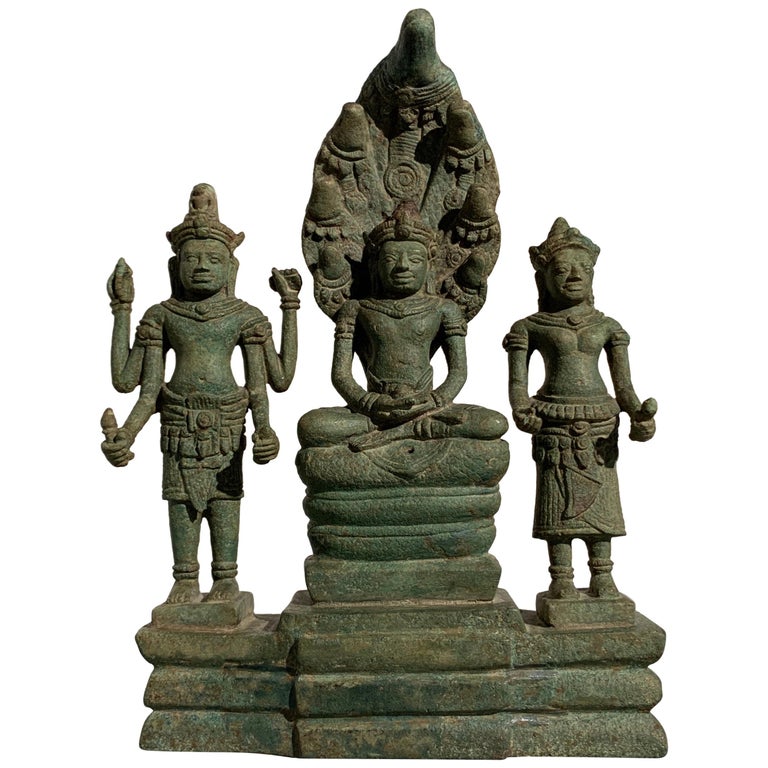 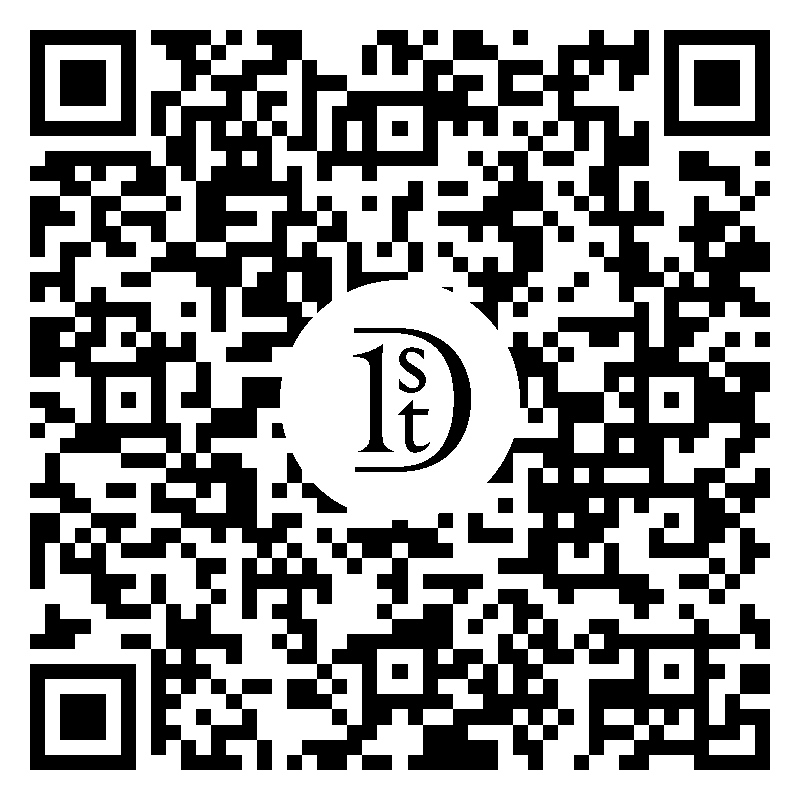 An important Khmer bronze Buddhist triad group featuring an image of the Buddha sheltered by a Naga, and flanked by the bodhisattvas Avalokiteshvara and Prajnaparamita, Angkor Period, Style of the Bayon, late 12th-early 13th century, Cambodia. This triad represents one of the most important images in Khmer art. The iconography was developed under the rule of King Jayavarman VII (ruled c. 1181 to c. 1218), with the imagery becoming the personal icon of the renowned king. On the surface, this image represents the Buddha sheltered by the Naga King Muchalinda, the seven headed serpent, and flanked by two of the most Important bodhisattvas in the Buddhist pantheon, Avalokiteshvara, the Bodhisattva of Compassion, and Prajnaparamita, the Bodhisattva of Transcendent Wisdom, also known as the Mother of All Buddhas. On another level, this image is meant to represent the royal family in the guise of enlightened beings, with King Jayavarman VII as the Buddha, his father as Avalokiteshvara, and his mother as Prajnaparamita. This image further solidified the idea of the God King, or the divine right to rule. The crown upon the Buddha's head, and the rich jewelry that adorns him reinforces this ideology. The image of the Buddha sheltered by a Naga, also known as Buddha Muchalinda, is an important image in Khmer art. Legend states that shortly after the Buddha reached enlightenment, he began a deep meditation. During his meditation, a large storm blew in. Fearing the Buddha's meditation would be interrupted by the malevolent storm, Muchalinda, King of the Nagas, raised the Buddha upon his coils and sheltered him with his seven hooded heads until the storm passed. The image conveys the protection Buddhist practitioners hope to obtain from the teachings of the Buddha. Avalokiteshvara, the Bodhisattva of Compassion, is portrayed in his four armed form, representing his active nature. He is dressed in the regalia of royalty, with a crown upon his head, a large necklace, armlets and bracelets adorning his body. He wears a pleated sampot embellished with a jeweled belt. An image of Amitabha Buddha graces his crown. Prajnaparamita, the Bodhisattva of Transcendent Wisdom, is portrayed as a matronly figure, bare chested, and adorned similarly to her counterpart, Avalokiteshvara, with a crown, and festooned with jewels. She holds a lotus bud in one hand, a sutra in the other. The figures were cast separately then attached to the rectangular tiered plinth. Provenance: Dorris Weiner, 1980s Dr. Charles Smithen Collection, 1990s.

Founded in 2001, Lotus Gallery offers a carefully curated selection of furniture, jewelry, sculpture and works of art spanning millennia, continents and cultures. Although it seeks out beauty in all its forms, they specialize in Asian antiquities, especially Chinese pieces from the Han and Tang d...