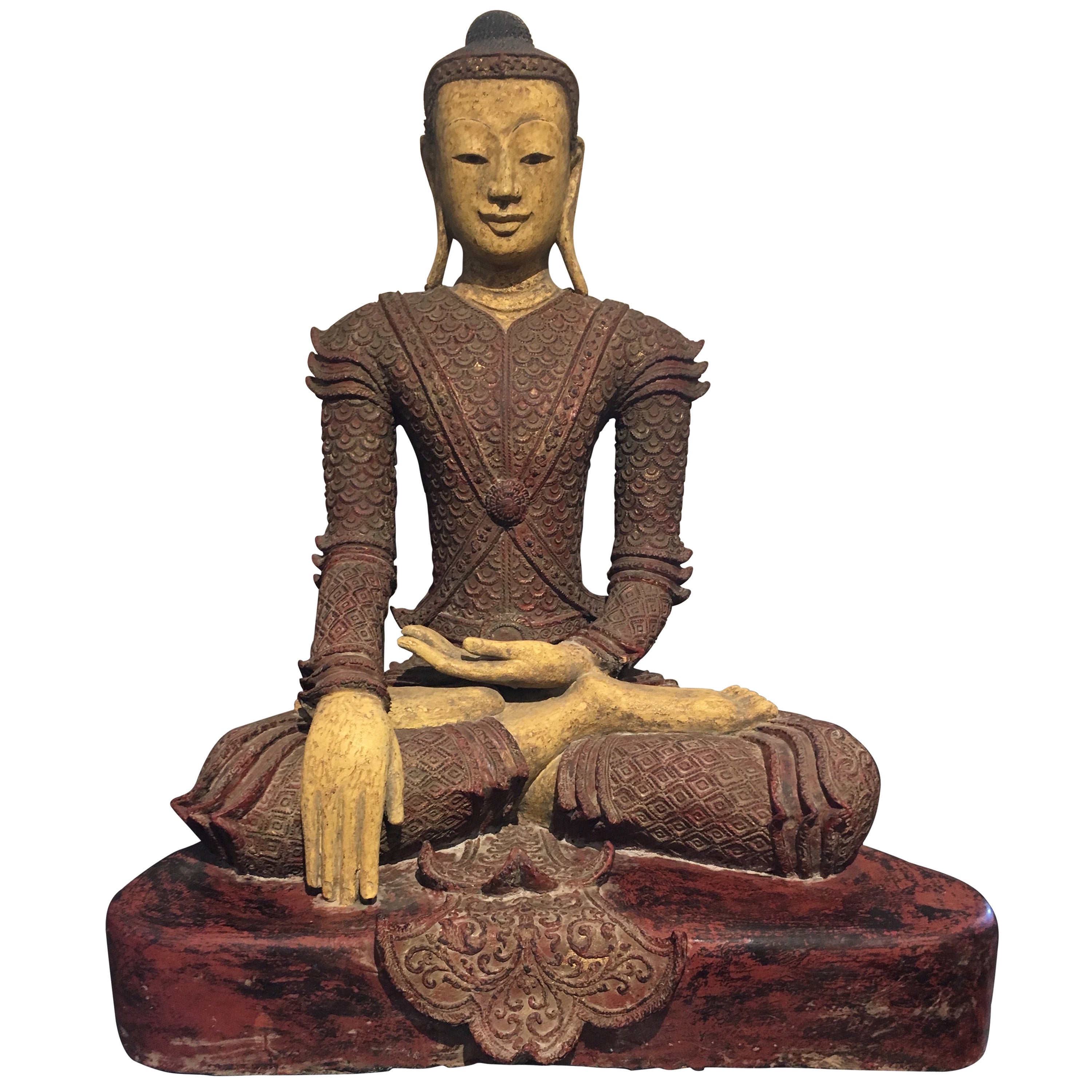 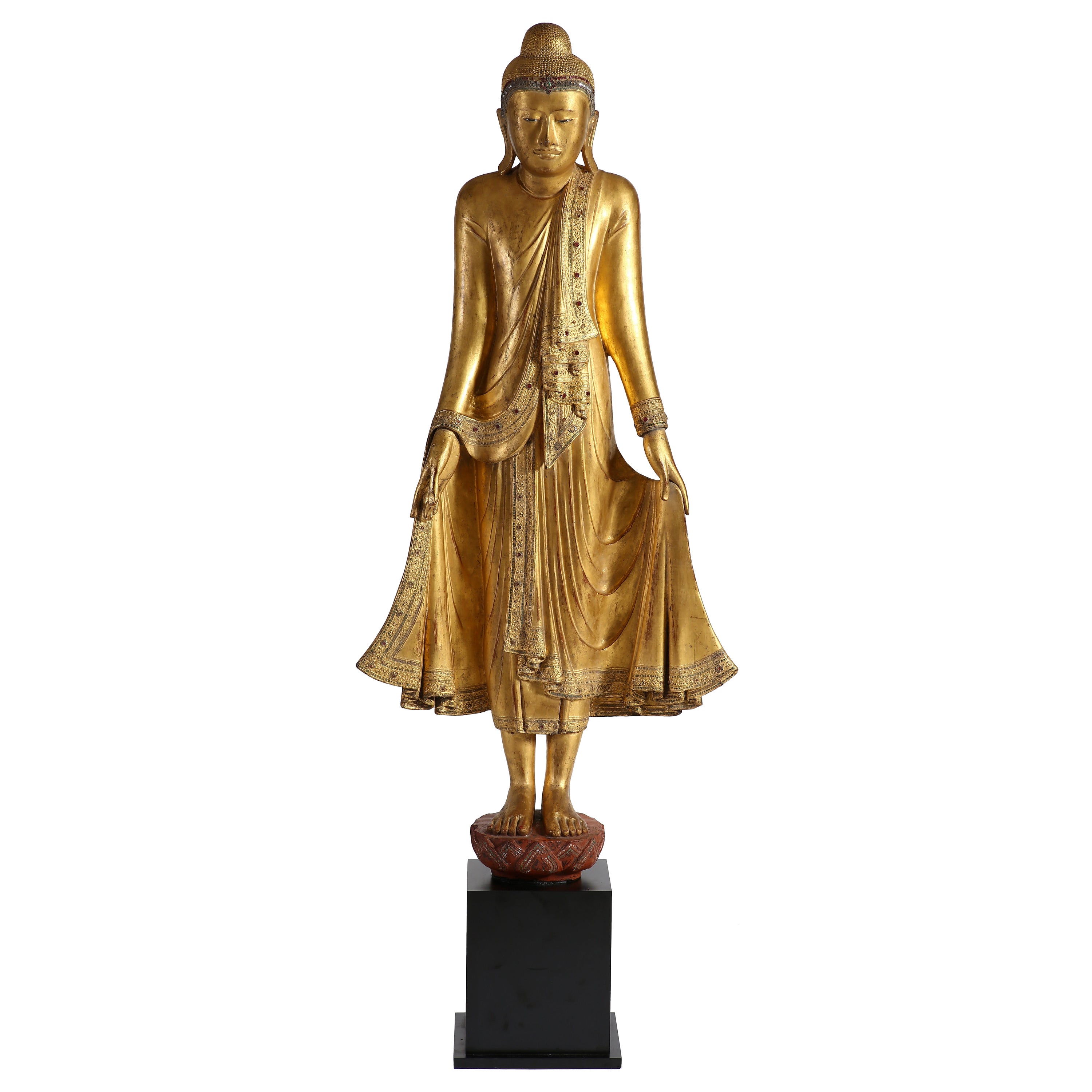 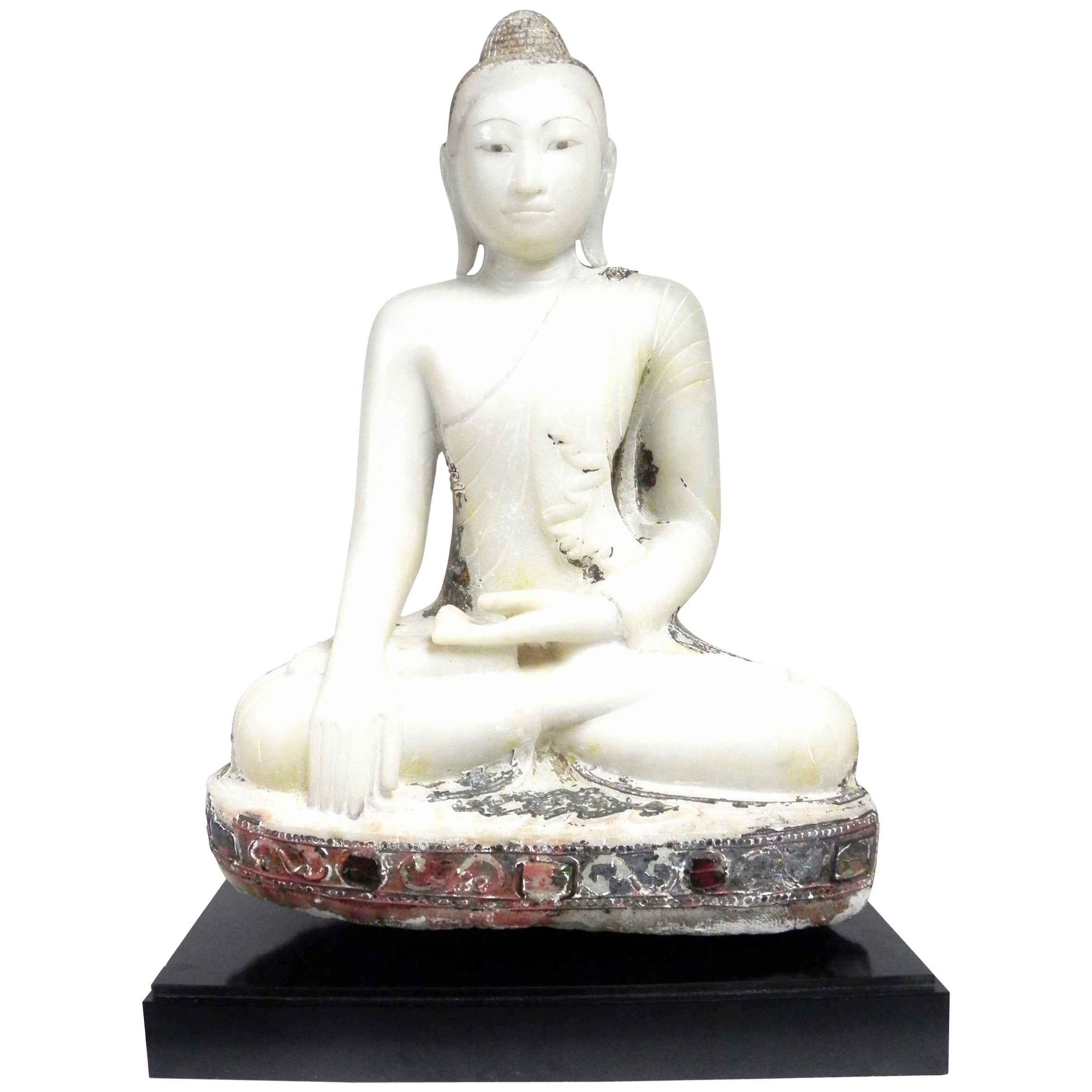 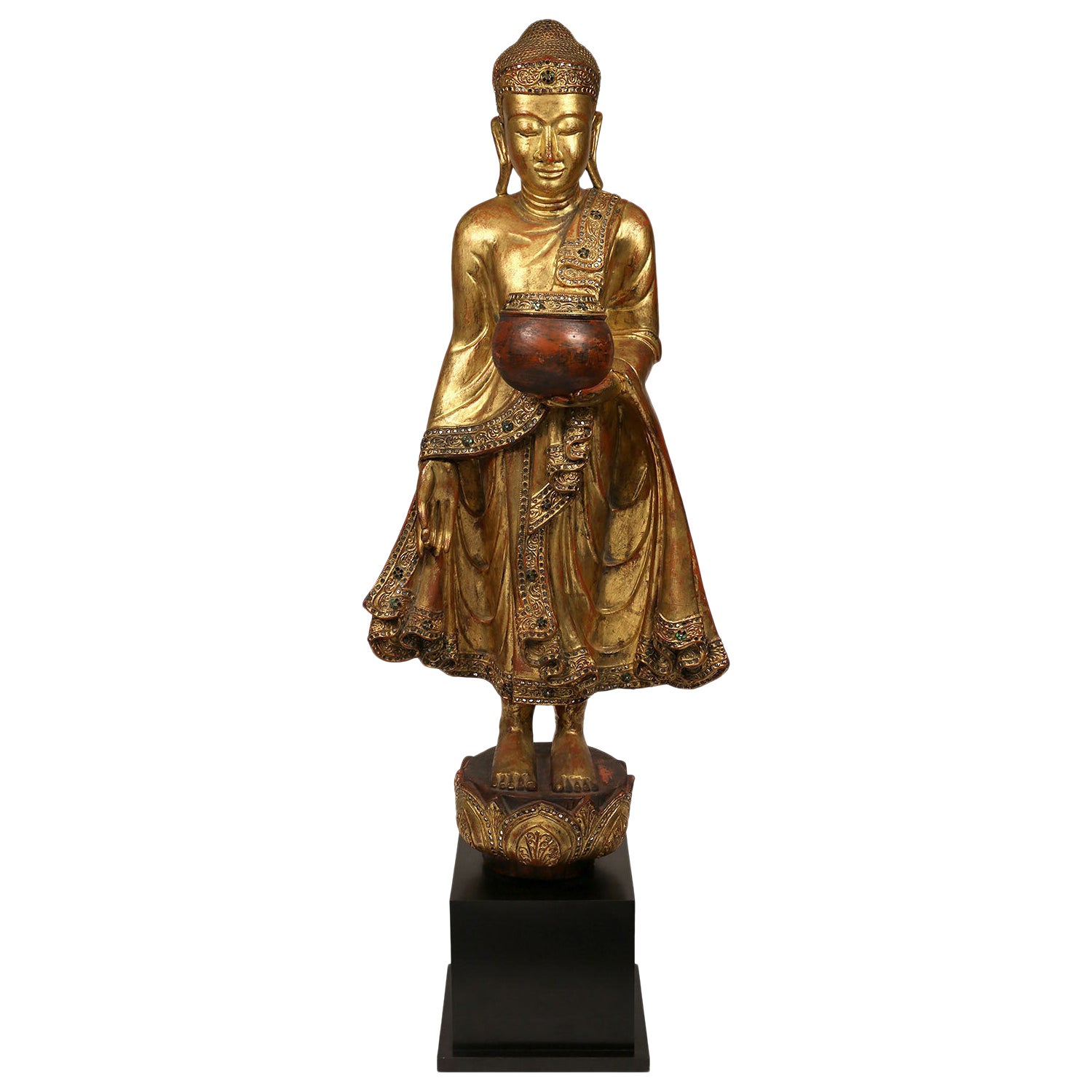 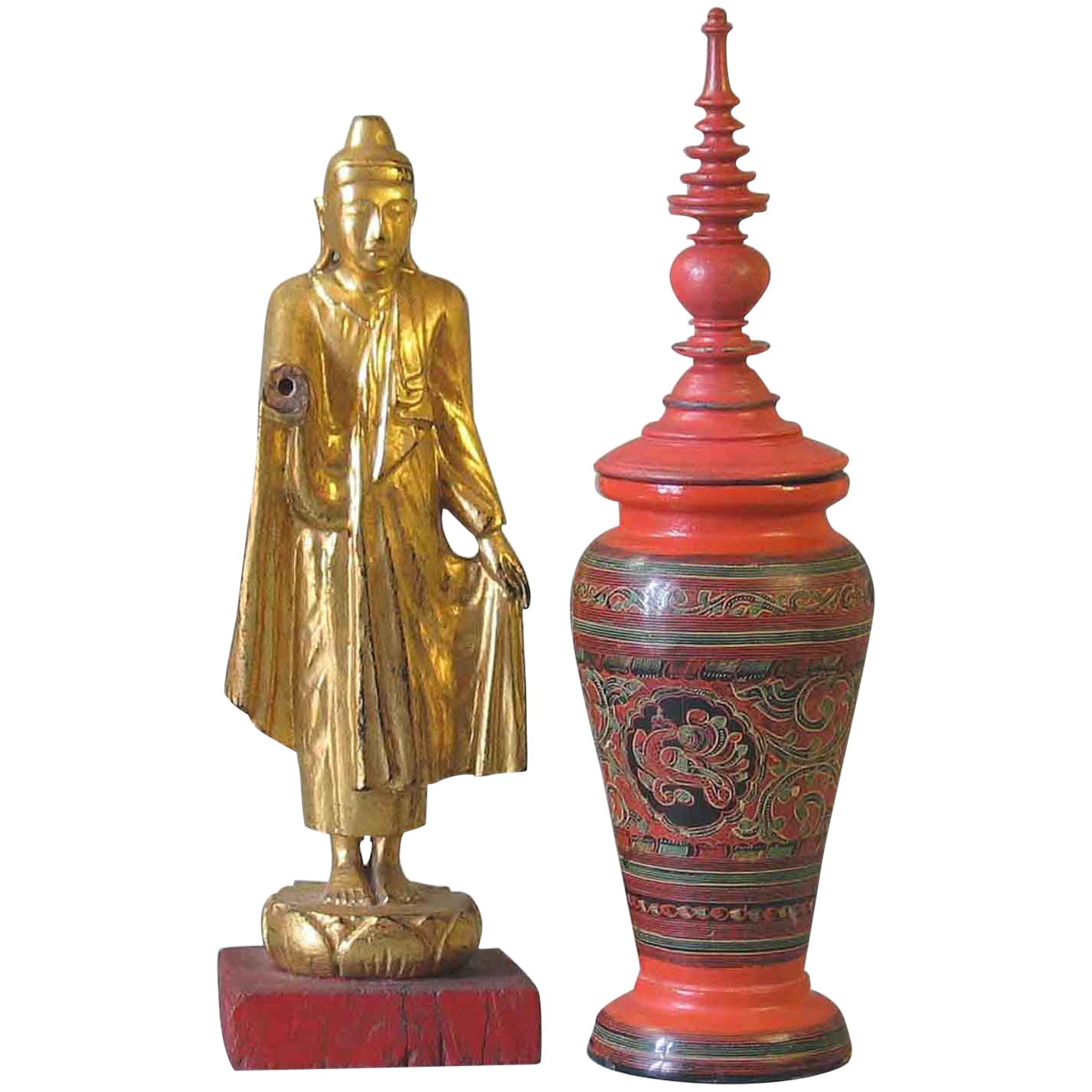 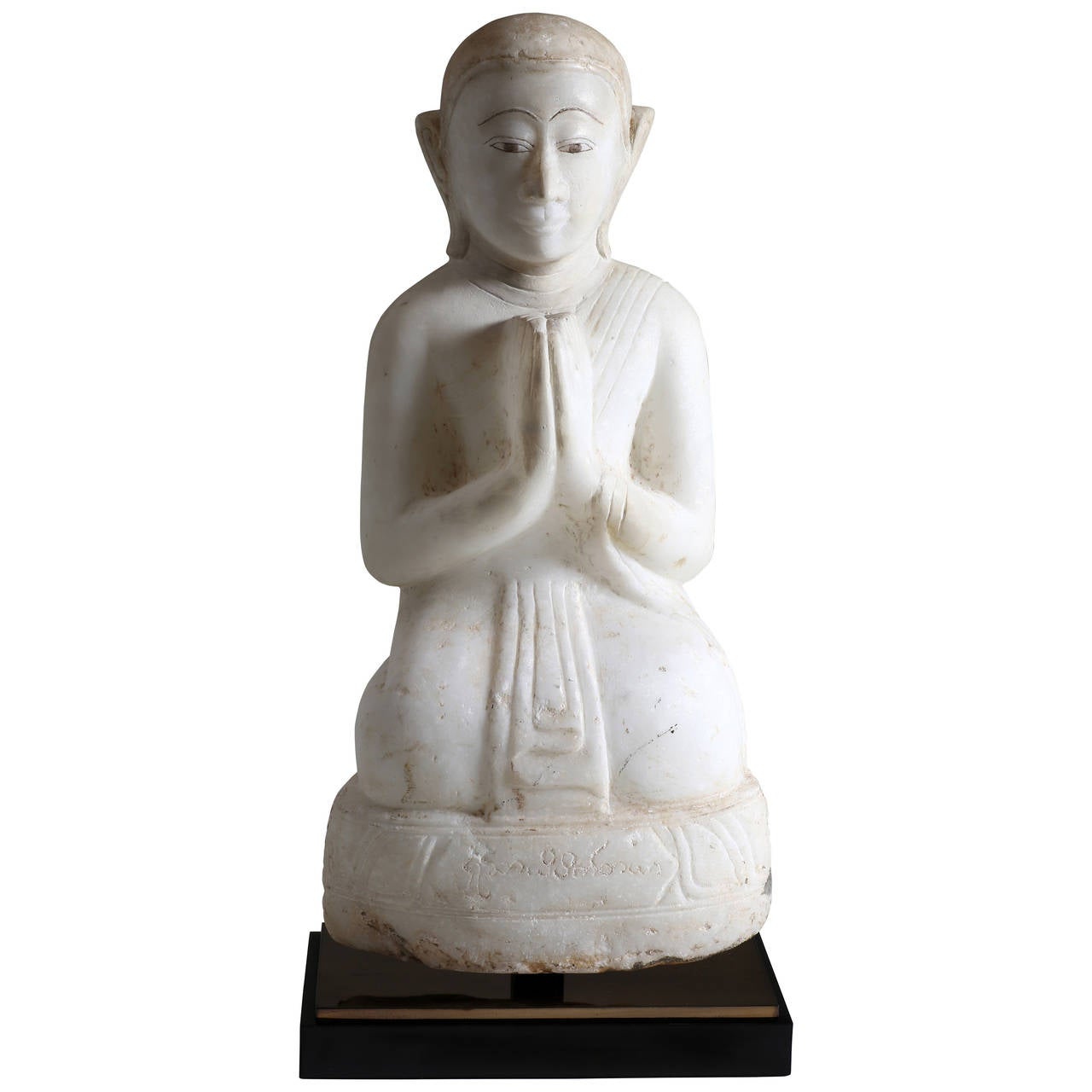 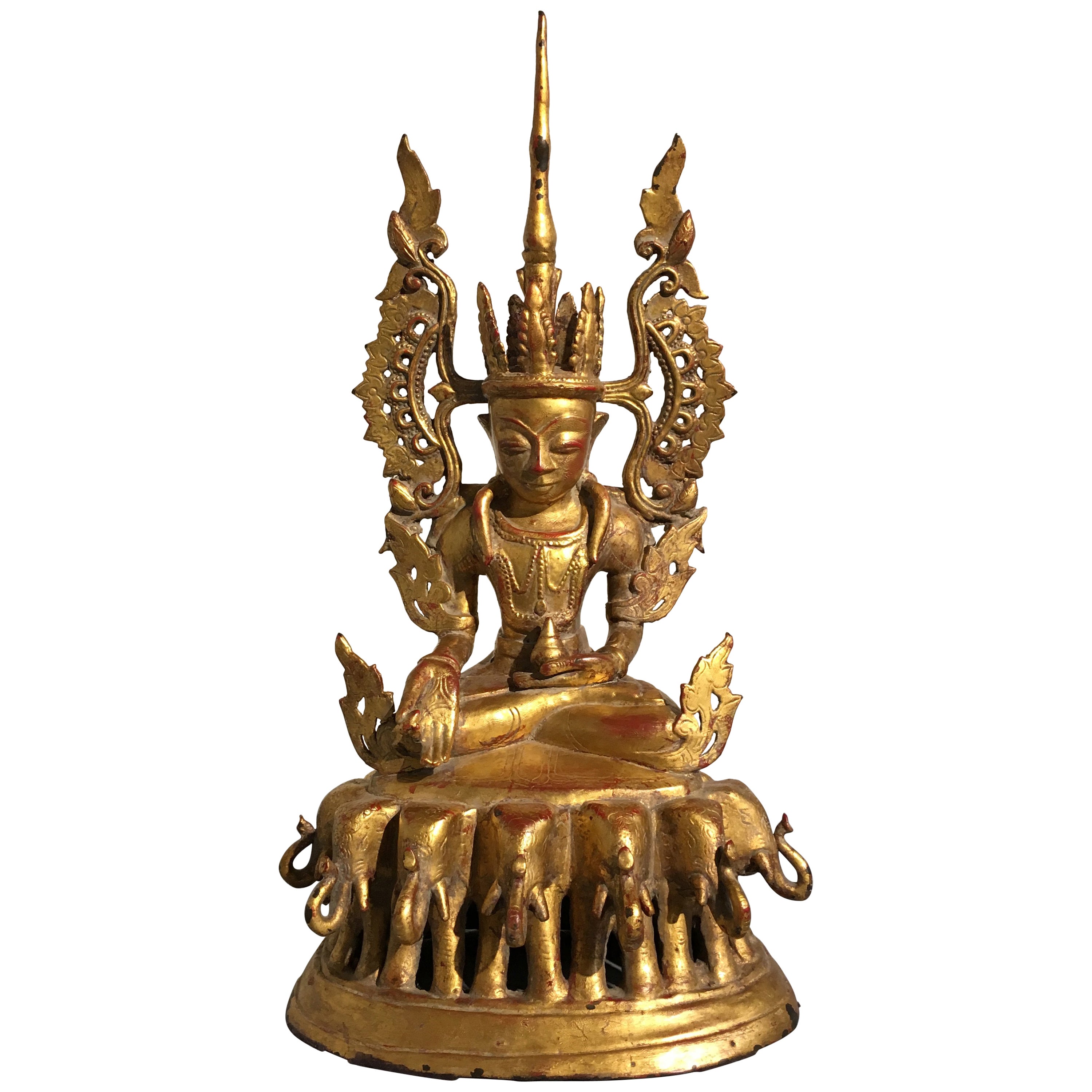 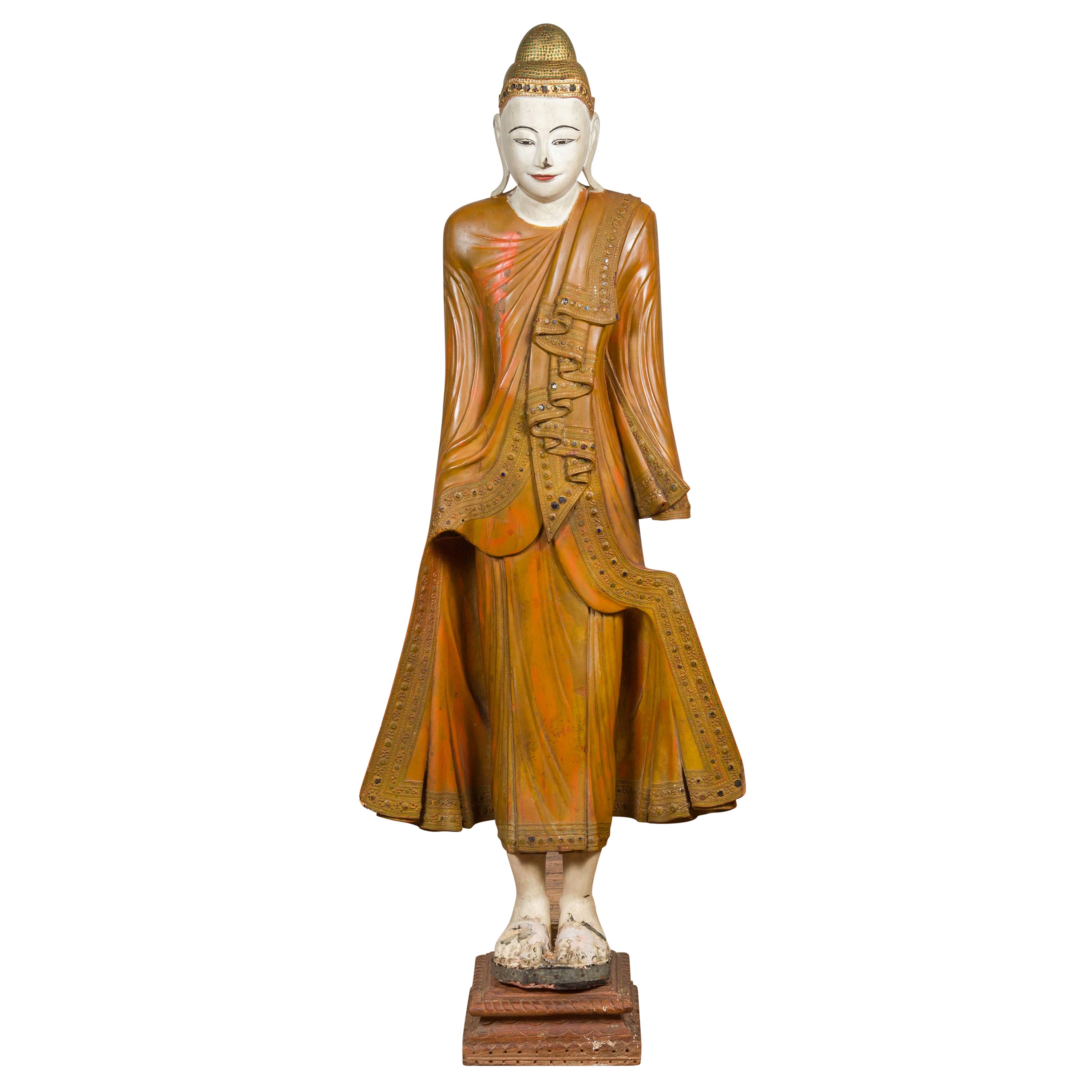 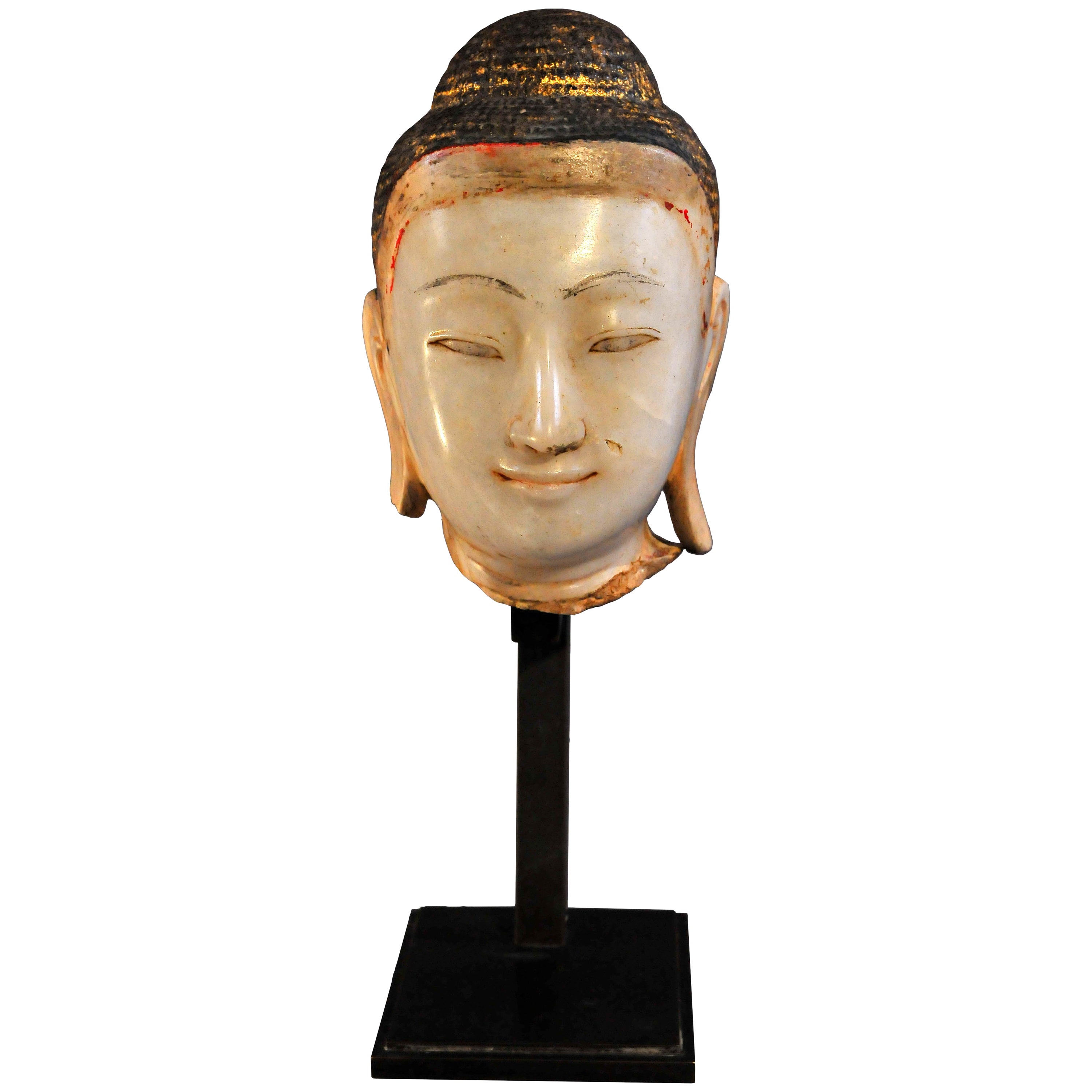 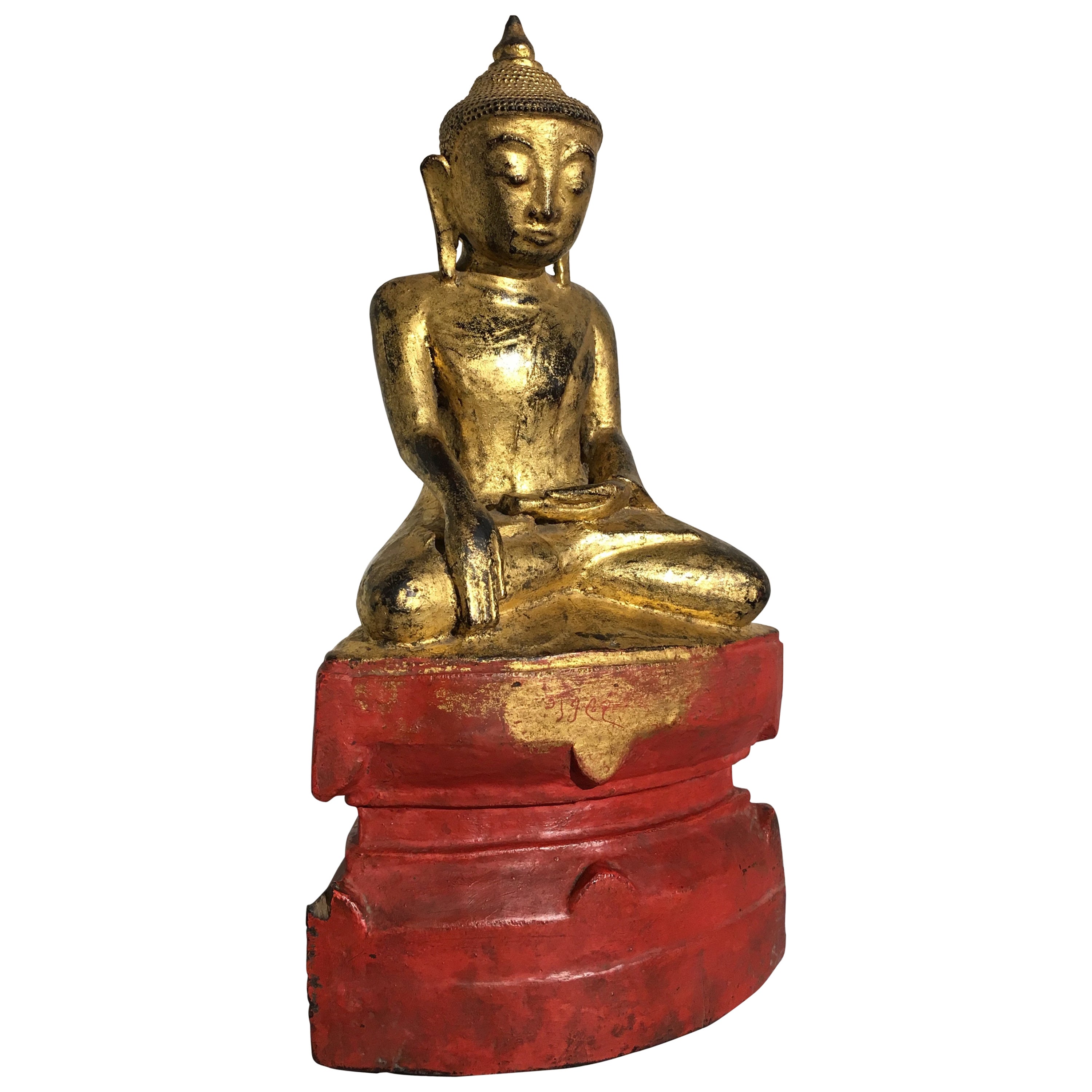 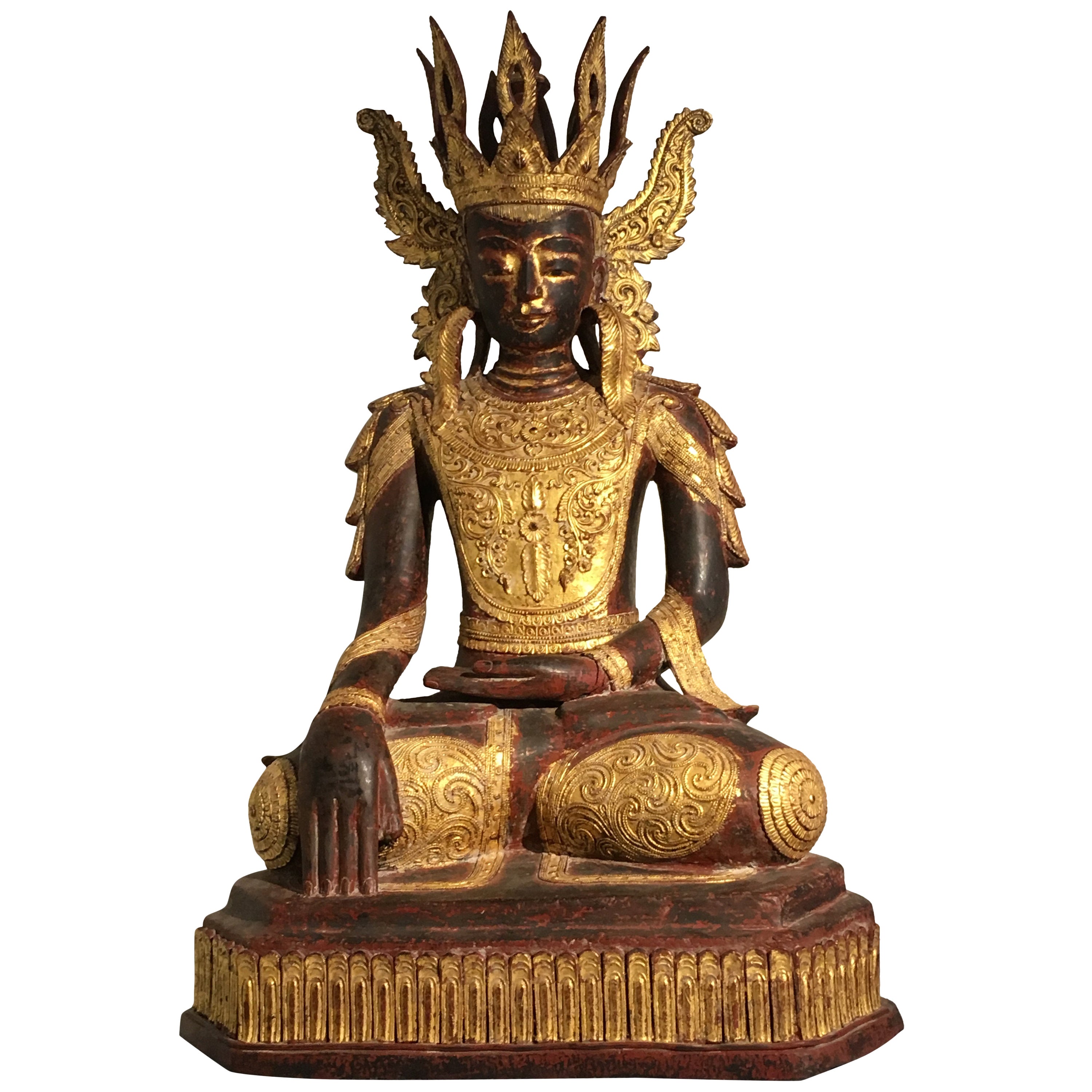 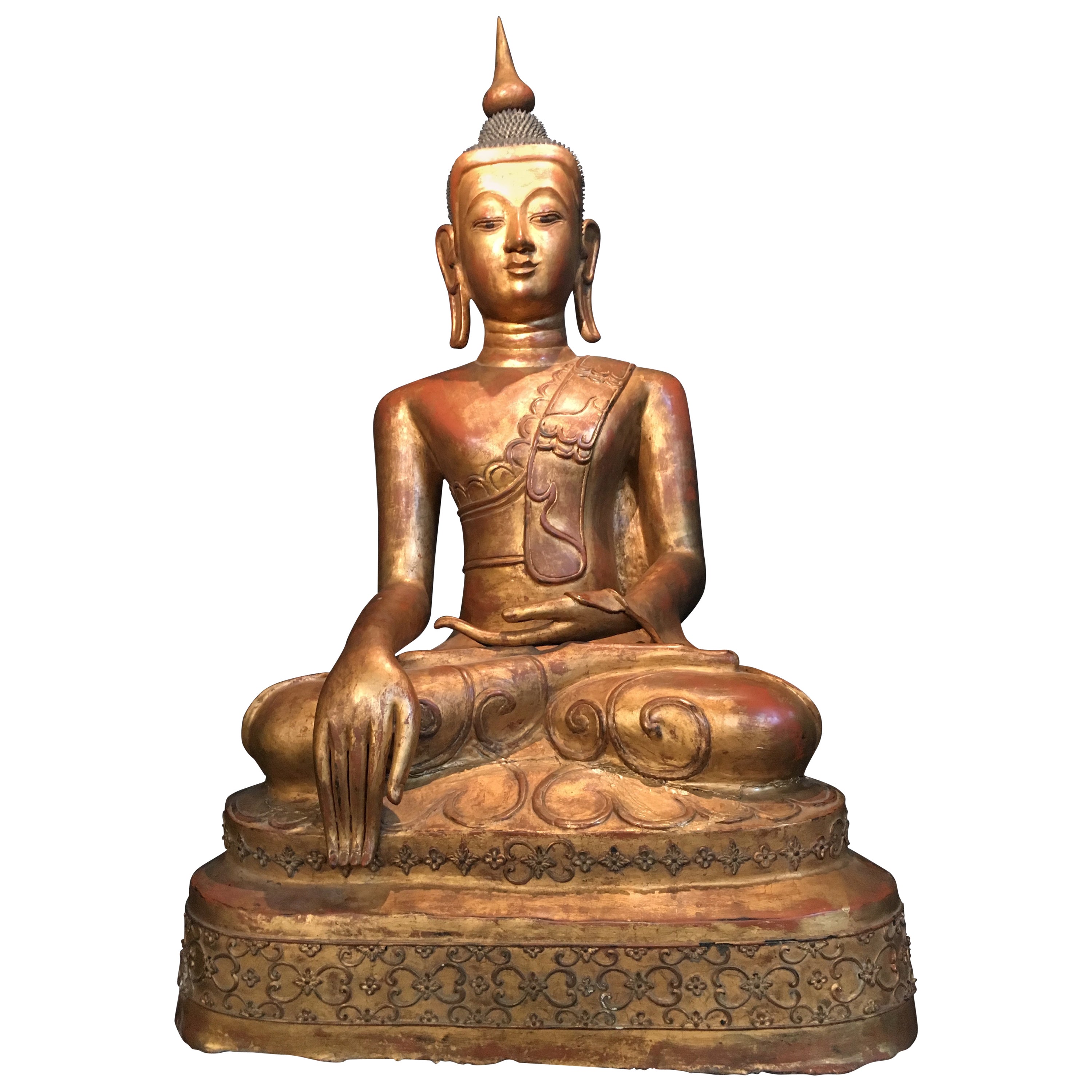 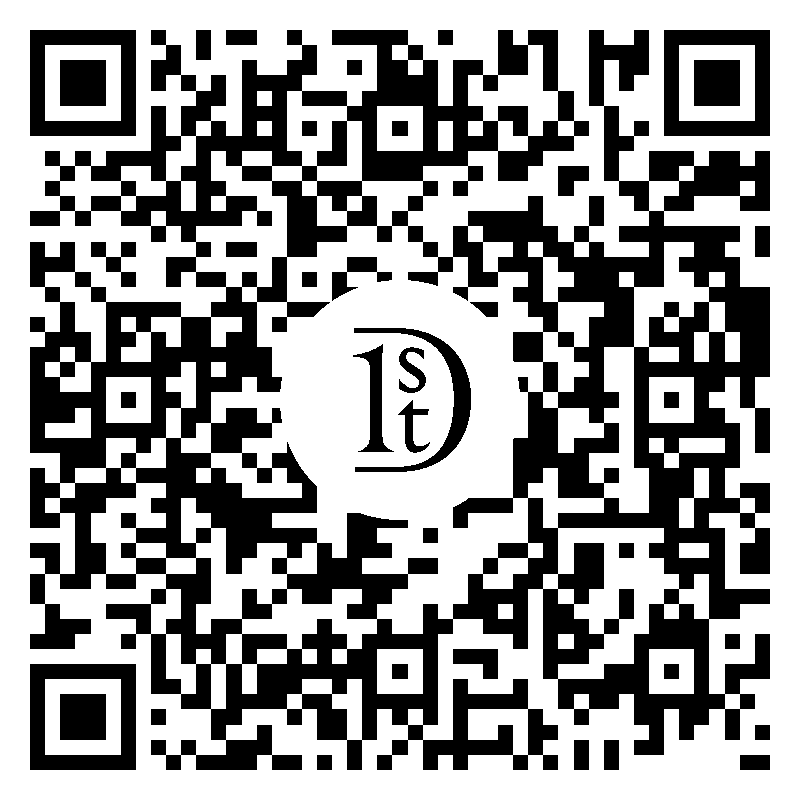 A resplendent Burmese Buddha in royal attire, known as Jambupati, carved from teak, lacquered, gilt and embellished with glass "gems". The head, hands and feet carved from pure white alabaster. Mandalay Period, Burma, early 19th century. The Buddha is portrayed seated in bhumisparsha, the gesture of "Calling the Earth to Witness", signifying the moment of the Buddha's enlightenment. His slender body is dressed in royal attire. His clothing crafted of raised lacquer, gilt, and further embellished with various foil backed glass "gems". His head, hands and feet carved out of white alabaster. The Buddha's alabaster head carved with a youthful, almost feminine countenance, with almond shaped eyes and a sweet smile upon his lips. His long earlobes pieced, and would originally have been adorned with earrings. The top of his bare head undecorated, missing the metal crown that would originally have graced his head. Figures of the Buddha dressed in lavish royal attire are known as Jambupati, in reference to the legend of King Jambupati, a proud and evil king that the Buddha tried to convert to Buddhism. Initially presenting himself dressed in the patchwork robes of a monk, the Buddha was dismissed outright by King Jambupati, unworthy of his time or attention. At that moment, the Buddha transformed his robes into the royal attire of a king, astounding Jambupati and converting him, and his kingdom on the spot.

Diamond Seller
These expertly vetted sellers are 1stDibs' most experienced sellers and are rated highest by our customers.
Established in 2001
1stDibs seller since 2010
127 sales on 1stDibs
Typical response time: 1 hour
More From This Seller
View All From Seller

Antique Burmese Gilt Standing Buddha, Mandalay, 19th Century
Located in 10 Chater Road, HK
Standing on a lotus pedestal, the giltwood Buddha is wearing elaborately carved samghati. The folds of the robe flow over each other and the borders are encrusted with colored glass....
Category

$795
Antique Burmese Alabaster Kneeling Monk Sculpture, Mandalay Style
Located in 10 Chater Road, HK
The monk is seated in the kneeling position, on a pedestal carved with inscriptions. His palms are closed together in front of the chest while he is paying respects to the Lord Buddh...
Category

$11,800
Burmese 17th Century Dry Lacquered and Gilt Buddha Calling the Earth to Witness
Located in Yonkers, NY
A Burmese Shan style dry lacquered and gilt wooden Buddha from the 17th century with smiling expression, seated on a pedestal. Created in Burma during the 17th century, this Shan sty...
Category