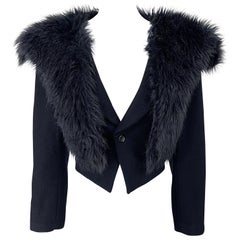 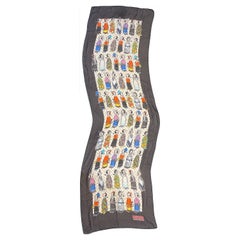 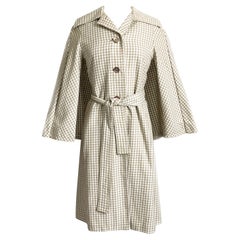 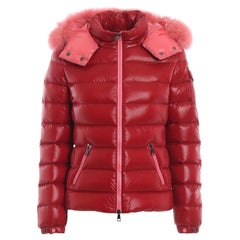 Eaton Mod Coat/Dress Made in France, 1960s
Located in Port Hope, ON
This wool shift coat/dress was carried by Eaton's Chelsea Place Room and was designed and manufactured in France, Although there is no designer label, it is reminiscent of Cardin and...
Category

Orange Cashmere Woven Visit Shawl - France Circa 1850
Located in Toulon, FR
Circa 1850/1855 France Rare Woven shawl with a cut-out lancet shape that adorns the shoulders of the elegant crinoline from the end of the Louis Philippe period. Lush vegetal decor...
Category

Stunning Snakeskin Patchwork Coat with Sheared Mink Lining and Black Fox Trim
Located in Tustin, CA
The patchwork aesthetic is this fall and winter’s most sought after look, which was proven on the runways during fashion month earlier this year. Designers created plenty of patchwor...
Category

Supreme Opulent Russian Sable Fur Stroller Length Coat
Located in Tustin, CA
Shone as the ultimate symbol of status and elegance, Russian Sable is considered to be the most coveted fur in the world. This Russian sable fur coat from Michael's Furs of Los Angel...
Category

Courreges 1960s Wool Jacket with Details
By André Courrèges
Located in Water Mill, NY
A fabulous jacket in off white wool twill from Courreges. It is double breasted with has full notched lapels, matching off white buttons and 2 side waist front pockets. The long sl...
Category

Valentino Tweed and Wool Knit Poncho/Cape
By Valentino
Located in New York, NY
Valentino, ochre tones, wool tweed poncho/cape having a wool tweed, exterior and a wool knit interior lining. Versatile, shape that can wrap around the shoulders and neck or can be w...
Category

Vintage Missoni Reversible Floral Knit Mohair Alpaca Blend & Black Puffer Coat
By Missoni
Located in Portland, OR
This is a fantastic vintage 1980's reversible 2 in 1 Missoni coat! This vintage puffer coat has a black nylon side, with covered flap pockets and vertical seams. This coat is reversi...
Category

Gucci Silver Metallic Bomber Jacket
By Gucci
Located in Kiev, UA
This jacket is single breasted, with zipper front. Two front pockets, with zippers. Interior is fully lined and is filled with silk lining The exterior is finished with the label's ...
Category

Prada Watercolor Leaves Duffle Coat Runway F/W 1999, look #32
By Miuccia Prada, Prada
Located in Boca Raton, FL
Although Prada may have “gotten lost in the woods” with their 1999 Winter/Fall Collection- as wryly put in an article for the New York Times- this marvelous duffle coat may just be t...
Category

Vintage and Designer Coats and Outerwear

There is a stylish garment for anywhere in the universe, and on 1stDibs, finding the right vintage and designer coats and outerwear doesn’t have to feel like a journey to the ends of the earth.

Outerwear includes many types of garments aside from the standard coat. From capes, gilets, jackets and cloaks to raincoats and kimonos, fashion designers have long been preparing us for the elements, and outerwear in general has changed and evolved significantly over time.

A lot of the coat styles in our closets, such as the durable Navy-inspired peacoat, were popularized by soldiers who battled aggressive climes in their regulation field jackets and parkas — indeed, keeping troopers comfortable guided the design of the military surplus garments that have often become buzzy fashion trends. Even today, owing to the likes of Burberry, a luxury fashion house that is among the originators of the trench coat worn by British officers during World War I, the trench remains a timeless style, now available in a range of colors that can be worn throughout the year.

While women in late 1700s England donned an adaptation of a men’s jacket called a spencer — the likeness of which could be spotted in Ralph Lauren’s ready-to-wear collections hundreds of years later — designers hadn’t widely been crafting outerwear specifically for women. Generally, the outerwear of choice for the fashionable, well-heeled lady prior to the 1800s usually consisted of capes, shawls and stoles. By the mid-1800s, women were wearing overcoats with multiple layered collars popularized by men (often called a Garrick coat in England), and as women entered the workforce during the 1920s, hemlines climbed, jewelry was prominent and fashion conventions were broken across the board.

Thankfully, the 20th century’s tradition of challenging the norm continues steadfast in today’s outerwear fashions. Contemporary designers certainly find inspiration in 1960s and 1970s coats by Pierre Cardin, Yves Saint Laurent and Bonnie Cashin, but unisex options abound in modern creations that take both function and style into account. Find what inspires you in the full range of vintage and designer coats and outerwear available for sale on 1stDibs.