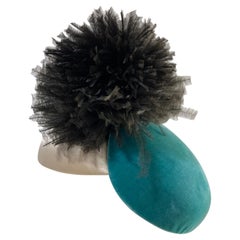 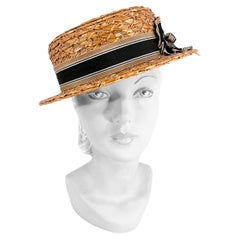 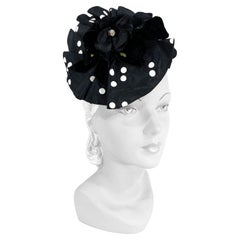 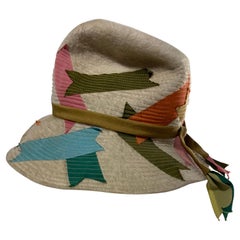 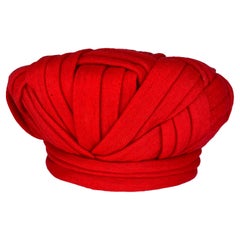 Victorian French Silk Cap Capote for Doll/child Circa 1860
Located in Toulon, FR
Circa 1860 France Capote with bavolet in taffeta for a girl of 10/12 years or an antique doll dating from the Victorian period. Spinach green taffeta on framework in iron hoops and ...
Category

Vintage Fascinator Hat with Peacock Color Feathers OSFM
Located in Port Saint Lucie, FL
Vintage, preowned fascinator hat with peacock color feathers, likely made in the 40s. Gorgeous colors on this one (reminds us of the piece Carrie Bradshaw wore for her wedding to Big...
Category

Hermés Fedora Hat
By Hermès
Located in Scottsdale, AZ
For the ultimate Hermés lover! Circa 21st century, this beautifully structured fedora is crafted from ultra soft rabbit felt with a rouge red finish. Around the base of the crown is ...
Category

Russian Black Leather Fox Fur Trapper Hat
Located in Amsterdam, NL
This trapper hat is made of very soft fox fur in a special color with black leather. The ear flaps are much longer, so that the fur is guaranteed to protect your ears from the cold w...
Category

1950s/1960s I. Magnin Red Floral and Tulle Hat
By I. Magnin
Located in San Francisco, CA
Late 1950s to early 1960s I. Magnin red hat declared with full silk and velvet flowers encased with gathered tulle. The floors are in varying shades of red and the base of the hat is...
Category

1960s Brown Ranch Mink and Satin Hat
Located in San Francisco, CA
1960s brown ranch mink structured hat with a band of silk satin. The inside is lined with starched lace to give this hat a tall shape.
Category

Vintage Hat by Marie Mercie Paris
Located in London, GB
A chic hat for the festive season . In black felt with a graduated ,sloping crown, the hat has a black felt bow and feather detail. The inner circumference is 23'', and the height is...
Category

Fendi monogram sun visor hat
By Fendi
Located in Amsterdam, NL
Fendi creme brown hat with Fendi monogram print all over visor with an adjustable strap and a Fendi hardware emblem at the corner. excellent condition one size
Category

Black Tulle Cocktail Turban Hat with Chandelier Bead Floral Trim - S, 1960s
By Deborah
Located in Tucson, AZ
Not for the faint of heart, this frothy cocktail hat will add inches to your height and ensure you leave a memorable impression. Dangling faceted beads around the bottom edge add sub...
Category

1960s Joanne Rhinestone Bow Hat
Located in Scottsdale, AZ
The most glamorous 1960s "Joanne" hat of them all! Made of solid black felt with sturdy construction. Silky back satin ribbon along the circumference of the hat. The best part: the c...
Category

The right vintage or designer hat can transform a look. This humble accessory is your reliable pièce de résistance, boosting confidence and lending an air of sophistication to any ensemble.

Functional and a widely renowned, versatile finishing touch when heading out for a night on the town, hats have long been a part of the history of fashion. Wealthy Egyptians, for example, wore hats to keep them cool in the blazing sun.

In the early 1800s, the wide-brimmed bonnets that women wore became increasingly elaborate. The brims broadened and many were embellished with colorful floral decorations. Legendary fashion designer Gabrielle “Coco” Chanel’s career began in millinery, a term that stems from Milan, Italy, as it was the city best known for producing quality hats during the 16th century. That was before she would set the fashion world alight with comfortable and practical jackets and skirts, encouraging women to leave extravagant clothes behind. Halston, who defined the spare, body-conscious style of the so-called Studio 54 era, was the hat designer for Bergdorf Goodman when he first moved to New York City. He had his first encounter with fame in 1961 when Jackie Kennedy wore a pillbox hat he designed.

From fascinators at a prestigious derby to a baseball cap for a walk in the park, there’s a hat for every occasion. When shopping for the right hat, you’ll want to pick one you feel confident in. Think about size too — you don’t want a wide-brimmed headpiece that will hog the spotlight on every occasion (or maybe you do). If you’ve got a petite face, an oversize hat might be too overbearing.

On 1stDibs find an expansive assortment of vintage and designer hats today. You can search for hats by style, designer or color.