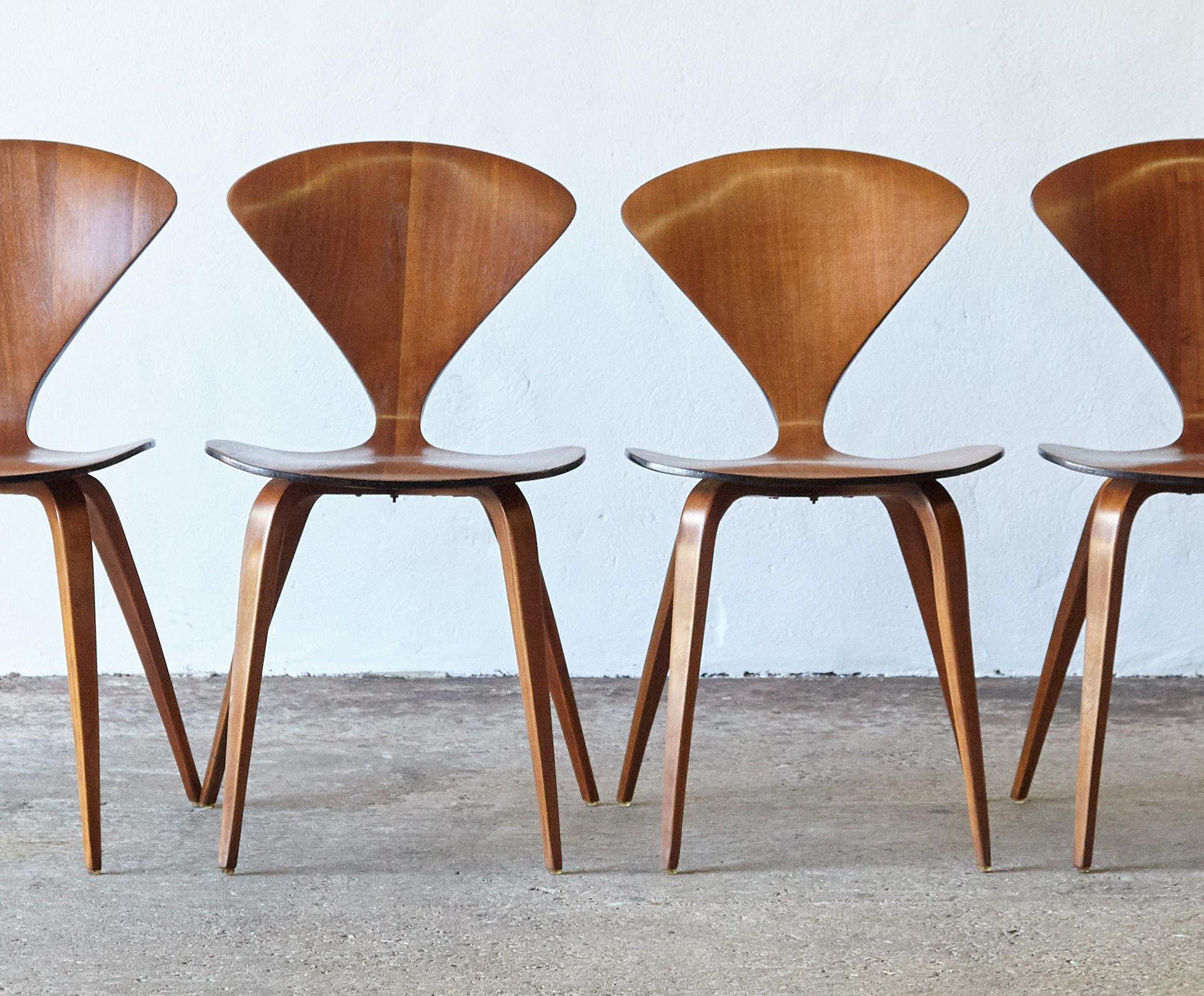 Boasting clean lines, gentle curves and organic material, 1958’s Cherner chair distinctly embraced the attributes of mid-century modern furniture, even though its author may not have been as prolific or well-known as his contemporaries. New York City architect and designer Norman Cherner (1920–87) was fascinated by the principles of the Bauhaus movement and taught at Columbia University — where he’d previously been a student — and at New York’s Museum of Modern Art. He worked in various areas of design, including crafting storage systems and lighting, but the Cherner chair's inspiration came from his passion project: In the late 1940s, Cherner was building low-cost modular housing in upstate New York. He designed affordable furniture for these homes and wrote books such as Make Your Own Modern Furniture about his idea that good furniture should be available for all. The Cherner chair fits this philosophy, but the story begins with the Pretzel.


In the early 1950s, a plywood chair called the Pretzel debuted in a Herman Miller showroom. It was conceived by John Pile, a designer in the studio of George Nelson, who was then Herman Miller’s design director.


While beautiful, the Pretzel had structural problems and was expensive to make, so Herman Miller contracted Massachusetts manufacturer Plycraft to produce the chair. A dispute between the two companies and concerns over costs halted Pretzel production in 1957, so Plycraft president Paul Goldman got Cherner (a Nelson recommendation) to improve upon the design. The Cherner chair, in the sculptural swoop of its wing-like arms and sloping seat made of layers of laminated plywood, emphasized the distinctive properties of working with the material, not unlike the work of Charles and Ray Eames. The design became popular in 1958, but Cherner wouldn’t know: Goldman told him the chair was canceled while selling it under a different name.


Cherner sued Plycraft after he’d discovered he’d been lied to. When a judge ruled in his favor in 1961 — which forced Plycraft to pay Cherner royalties and bring the chair to market with proper credit — it was good timing. The chair appeared in Norman Rockwell’s new painting The Artist at Work, which ran on the cover of The Saturday Evening Post in September of that year. Cherner’s elegant chair was famous, and it remained in production until 1972.


Today, the Cherner Chair Company, founded by Cherner’s sons Benjamin and Thomas, produces the Cherner chair based on Norman’s original drawings. It was reintroduced in 1999. In addition to manufacturing new cabinets and tables, the Cherner brothers have debuted various iterations of the Cherner chair — including with an upholstered seat, a painted seat and more — and have rescued their father’s other seductive seating designs as well.

Norman Cherner First Edition Cherner Chair with 'Bernardo' Label
By Plycraft, Norman Cherner
Located in Portland, ME
First production Norman Cherner, 'Cherner Chair' in bent Walnut. Made by Plycraft of Massachusetts, circa 1960. This scarce example is labeled with credit given to a false designer b...
Category

Pair of Norman Cherner for Plycraft Side Chairs

Bentwood Side Chairs by Norman Cherner for Plycraft

Norman Cherner Dining Chairs, Set of Eight
By Norman Cherner
Located in Atlanta, GA
Set of eight sculptural dining chairs, designed by Norman Cherner for Plycraft, American, circa 1950s. They have all been refinished and reupholstered in black vinyl. They measure: 3...
Category