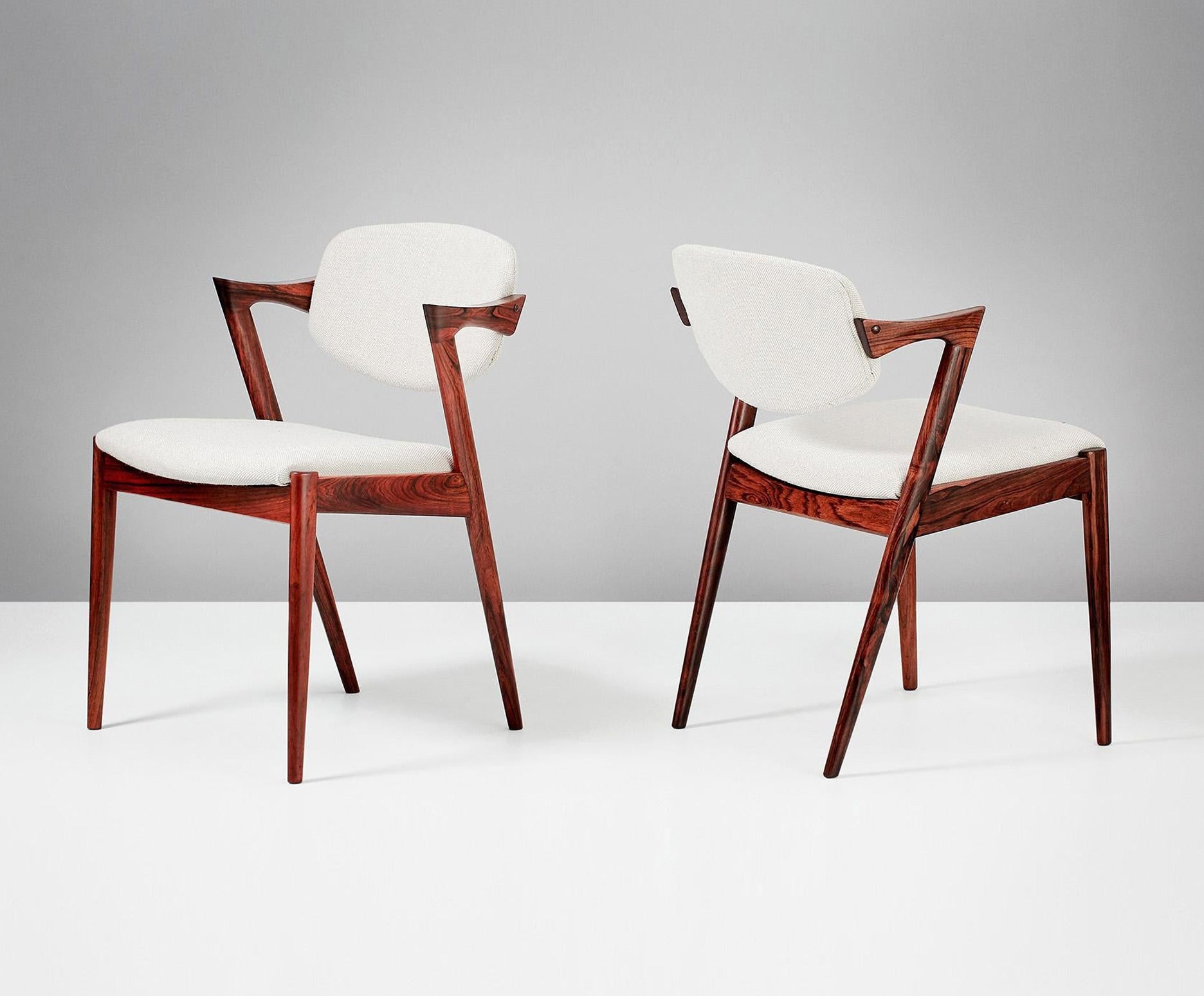 A radical, simple piece of furniture, Kai Kristiansen's (b. 1929) Chair #42 perfectly exemplifies Danish modern design’s meld of form, space and functionality. Produced in 1956 for Danish manufacturer Schou Andersen, the functional and modest properties of Kristiansen’s minimalist dining chair are emphasized when viewed from the front. Admiring Chair #42 from the side tells a different story, however, as the focus shifts from its sharply inclined rear legs and joined armrests to a tilting, floating backrest. The chair’s profile is dramatic and radical, and examining the frame from this perspective helps clarify why Chair #42 earned the nickname “Z Chair” over the years. Kristiansen’s elegant piece is both simple and technically difficult, its soft lines belying the expert craftsmanship therein while referencing earlier artisan furniture that influenced the Danish modern movement as well as Kristiansen himself.

Trained as a cabinetmaker, Kristiansen studied at the Royal Danish Academy of Fine Arts in Copenhagen under Kaare Klint, who is widely recognized as one of the founders of modern Danish design. The young Kristiansen established his practice soon after, focusing mostly on seating and storage for prominent Danish manufacturers such as Andersen, Fritz Hansen and Magnus Olesen. While he’s largely known for the quality of his designs, Kristiansen was equally comfortable designing chairs, desks, sideboards and wall units. He designed the Model 31 chair shortly after Chair #42 — a similar model, with inlaid arms — as well as the popular Paper Knife series of sofas and chairs. As a designer, Kristiansen favored teak and rosewood, and garnered major renown for his dark-wood FM modular wall unit in 1957 for Feldballes Møbelfabrik. The customizable shelving system was popular throughout Europe and in the United States, and remains one of the best-known examples of modular shelving, predating Dieter Rams’s 606 Universal Shelving System for Vitsoe by several years. Many of Kristiansen’s designs fell out of production due to their manufacturing challenges, although some collections have recently been reissued by Japan’s Miyazaki Chair Factory.

The stripped-down, spare Chair #42 is one of the earliest modern ergonomic chairs, specifically designed to support the sitter. Suitable for a dining room or as a reading chair, it is Kristiansen’s best-known chair. The piece has effectively remained in production since the 1950s and is currently available from Miyazaki.

Set of Six Model 42 Chairs by Kai Kristiansen for Schou Andersen
By Kai Kristiansen, Schou Andersen Møbelfabrik
Located in Little Burstead, Essex
These chairs are made from Santos Rosewood, with wonderfully marked grain on the solid arms and legs, They are all in excellent original condition, the only thing that has been done ...
Category

Kai Kristiansen Rosewood Dining Chairs, Model 42, Set of Six, 1960s.
By Kai Kristiansen, Schou Andersen Møbelfabrik
Located in Porto, PT
Set of 6 rosewood dining chairs model 42 with movable backrests, upholstered in the original blue fabric. These items are in original condition, can be sold as they are or fully res...
Category

Four Kai Kristiansen Cognac Leather and Mahogany 'Z' Dining Chairs
By Kai Kristiansen
Located in Brooklyn, NY
A second set of four dining chair from Danish designer Kai Kristiansen. This version of the ‘Z’ chairs has a back and seat upholstered with a bright cognac leather which is a rare co...
Category 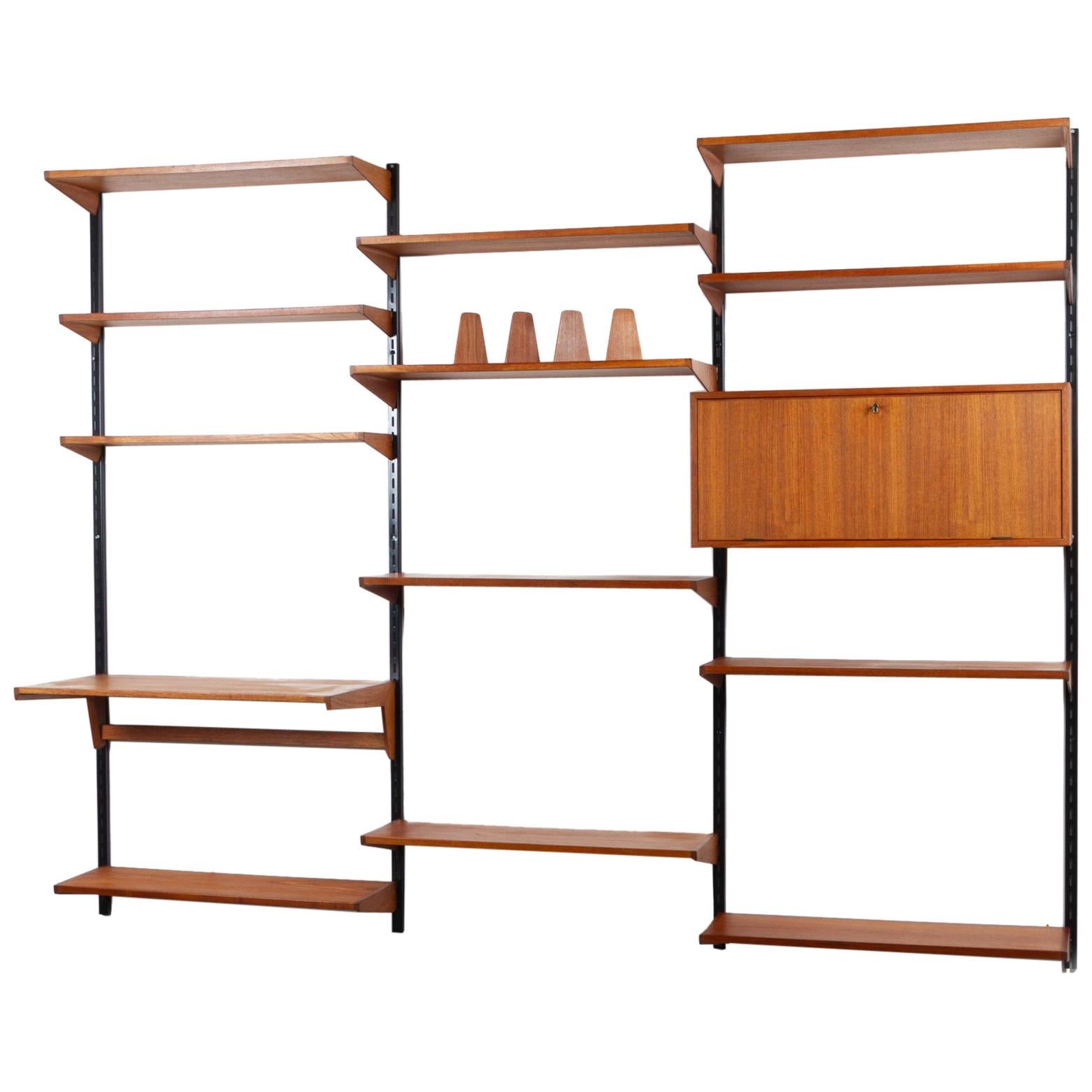 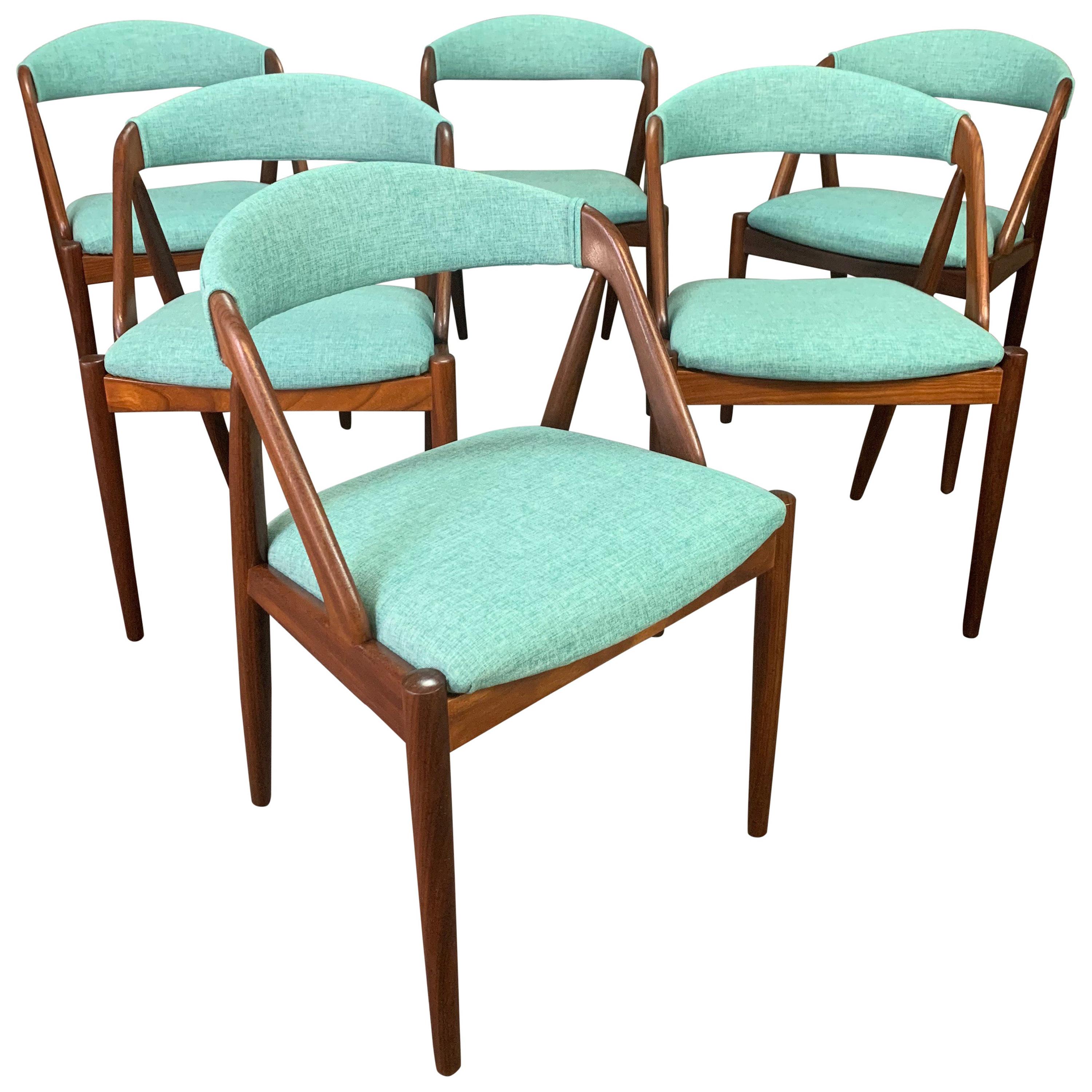 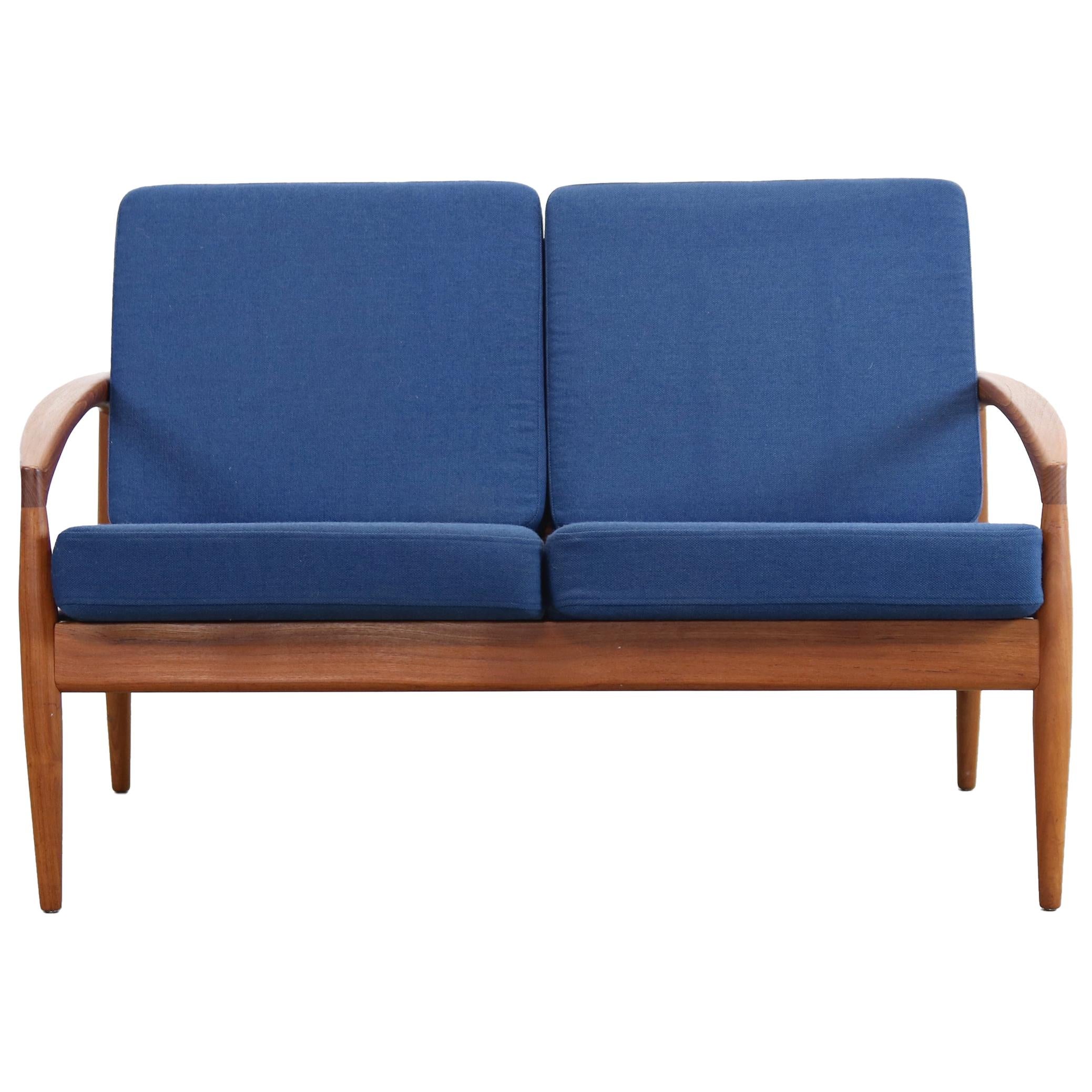 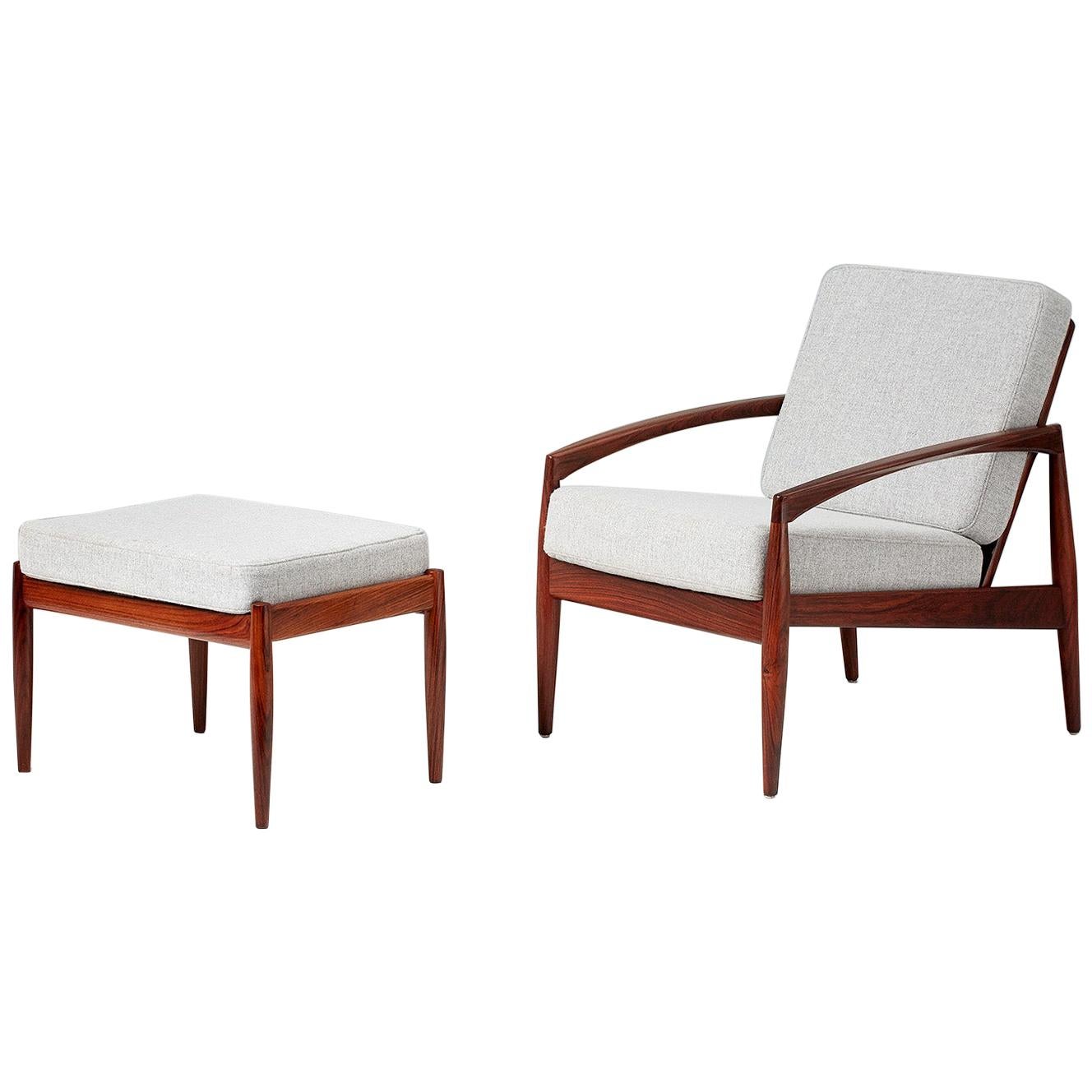