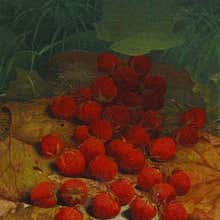 William Mason Brown was born in Troy, New York, where he studied for several years with local artists, including the leading portraitist there, Abel Buell Moore. In 1850, he moved to Newark, New Jersey, and began painting romantic landscapes in a meticulous style reminiscent of the Hudson River School. In 1858, Brown moved to Brooklyn, where he worked for the rest of his career, exhibiting annually at the National Academy of Design, New York, from 1859 to 1890, and at the Brooklyn Art Association from 1865 to 1886.

Brown was undoubtedly exposed to the teachings of John Ruskin, which so greatly affected American artists during the late 1850s and 1860s. The Ruskinian, or Pre-Raphaelite, influence is reflected in Brown’s crisply painted, meticulously detailed still lifes, including Strawberries Strewn on a Forest Floor. William H. Gerdts said of the artist:

[Brown’s] still lifes are the most meticulous and photographic of his generation and during his lifetime his technique was compared to that of the great French academician, Jean-Léon Gérôme. . . . Brown almost never allowed his paint handling to be apparent. He reveled in textural duplication: the “halo” of the fuzziness of a peach, the “map” of the rind of a cantaloupe. In painting humbler fruits — berries and cherries — each particular item in a group had its own color, its own highlight, its own quality of weight (Painters of the Humble Truth [1981], p. 102).

As a former landscape painter, Brown was a staunch practitioner of another Ruskinian tenet — the still life placed in a natural setting — of which Strawberries Strewn on a Forest Floor is a prime example. In contrast to the more formal and traditional tabletop still life (which Brown also painted), Ruskin preached that fruit and flowers ought to be rendered as they exist in nature, relieved by soil or grass and other vegetation, and much like the works of the famous English painter William Henry “Bird’s Nest” Hunt. However, Barbara Dayer Gallati has noted a curious contradiction of Ruskinian theory in a similar work by Brown, Raspberries (oil on canvas, 20 x 16 in.; The J. B. Speed Art Museum, Louisville, Kentucky; see Linda S. Ferber and William H. Gerdts, “The New Path: Ruskin and the American Pre-Raphaelites,” exhib. cat. [New York: The Brooklyn Museum, 1985], p. 148 pl. 20 illus. in color), which depicts a loose bundle of raspberries set within an intimate space on the forest floor:

There is detectable in Strawberries Strewn on a Forest Floor, however, a duality in approach to nature that is antithetical to Ruskinian doctrine. The individual berries, the sheltering bush, the wild flowers, and grassy patch of earth are uniformly executed in a fashion comparable to that of Ruskin’s closest followers. Yet the berries do not appear as they would in nature; the artist’s hand has intervened in order to create a pleasing composition. This feature, along with the stage-like setting and theatrical lighting, introduces an artificial note which suggests that however veristic it all may seem, this is a composition that originated in the studio and not in nature (Gallati, “Raspberries,” in ibid., p. 92).

This apparent contradiction in Ruskinian theory is also seen in Strawberries Strewn on a Forest Floor, which presents a loose group of rich red strawberries scattered about the forest floor. Although he concentrated on landscape painting in the early part of his career, Brown gained wider recognition for his still lifes, particularly of fruit, which were occasionally lithographed by Currier & Ives, or other printing houses, and were thus widely distributed. The characteristically strong color and tightly executed forms of his work lent themselves to the lithographic process.

(Biography provided by Hirschl & Adler)
Applied Filters3 results
Creator:William Mason Brown
to
Item Ships From
3
Height
to
Width
to
3
3
9,739
2,534
1,916
1,588
3
3
2
2
1
Strawberries Strewn on a Forest Floor
By William Mason Brown
Located in New York, NY
William Mason Brown was born in Troy, New York, where he studied for several years with local artists, including the leading portraitist there, Abel Buel Moore. In 1850, he moved to ...
Category 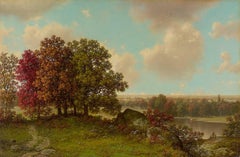 David Ligare
Still Life with White Roses in a Pot, 2018