Werner Drewes was a painter, printmaker, and teacher, who was born in Canig, Germany, in 1899. His father, a Lutheran Minister, hoped he would become an architect, but Werner chose the life of an artist. After he served on the front line in France during the war, Werner was admitted to the Bauhaus in 1921, where he studied under Klee, Itten, and Muche. Later, he traveled through Europe to study such old masters as Tintoretto, Velasquez and El Greco. After marrying Margaret Schrobsdorff, they traveled throughout South America, North America and Asia. In 1930, Werner immigrated to New York City with his family. In New York City, despite the Depression, Werner joined other Bauhaus artists such as Piet Mondrian and Lyonel Feininger to make a living as an artist. This group became the core of the American Abstract Artists group. Werner taught at Columbia University, worked on the design of the 1939 World's Fair building, and had shows at the Museum of Modern Art, Kleeman Gallery, and elsewhere. In 1946, he accepted a tenured position at the Washington University in St. Louis. In his later years, he moved to Virginia and continued to show at galleries in Germany, Turkey, and in the United States. The Smithsonian held a show attributing his 65 years as a printmaker at the Museum for American Artists. 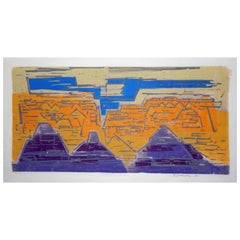 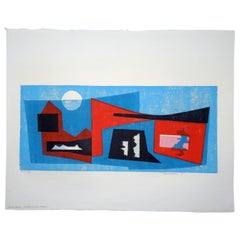 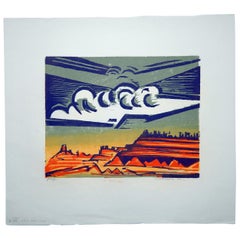 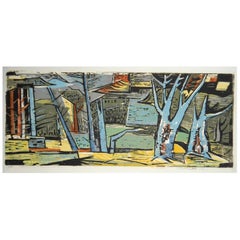 Woodblock Print of Sailboats
By Werner Drewes
Located in West Palm Beach, FL
This Mid-20th century woodcut of mored sail boats is by Werner Drewes and is titled "Calm Morning". The piece is number 168 of 200 and is pencil signed by the artist. Note: Plate (p...
Category

Werner Drewes Furniture are available for sale on 1stDibs. These distinctive objects are frequently made of paper and designed with extraordinary care. There are many options in our Werner Drewes Furniture collection, although gray editions of this piece are particularly popular. We stock 10 vintage versions of these items, while there is 0 modern edition to choose from as well. Many of Werner Drewes' original furniture was created in the Modern style in the United States during the 20th Century. If you’re looking for additional options, many customers also consider furniture by Ernest Trova, Laddie John Dill and Albert Al Hirschfeld. Prices for Werner Drewes Furniture can vary depending on size, time period and other attributes. The price for these items starts at $1,450 and tops out at $35,000, while pieces like these can sell for $1,900 on average.