Wendall Newton Gates was born in Jackson, Michigan, in 1911. He studied at the Cleveland (OH) Art Institute. After serving in WWII, he moved to northern California. For 30 years, he taught art at San Jose State College. He retired in 1976, and his daughters were born during this time. He helped develop the Art Department and establish a Master of Arts degree. Gates earned a Master of Fine Arts degree in painting at the University of Guanajuato, Instituto Allende in San Miguel de Allende, Mexico, and San Jose State College became San Jose State University. Gates’ wife was also a teacher. During her career, she taught several subjects and was a school librarian at several grade schools in Sunnyvale, California. Through the years, he had numerous exhibitions at local and regional galleries of his paintings, drawings and sculptures.

Gates’ last show was an exhibition of wire sculptures in 1992 at the Chaminade in Santa Cruz, California. He was battling Parkinson's disease for over 20 years and sought to convey a sense of the experience of living with this disease through the wire sculptures, which combine significant movement with sculptural form without mechanical additions. 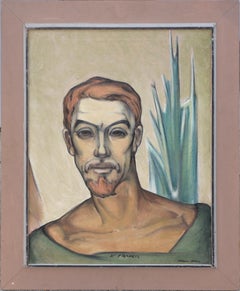 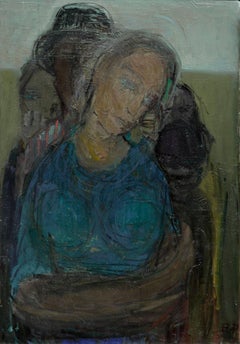 Portrait of the Artist
By Christine Chatwell
Located in Soquel, CA
Category

Christine Chatwell
Portrait of the Artist, 1990