Varujan Boghosian was born in New Britain, Connecticut, on June 26, 1926. After serving in the United States Navy, he attended Central Connecticut Teachers College and the Vesper George School of Art in Boston. In 1953, he had a Fulbright grant to paint in Italy and from 1956–59, he worked with Josef Albers, geometric abstractionist, at Yale University, where he earned both his BFA and MFA. Boghosian was a professor of sculpture at Dartmouth College in New Hampshire from 1968–96. He became primarily known for his assemblages in which he uses a variety of incongruous objects such as parts of weathered barn doors, antique dolls heads, old leather, marbles and ping-pong balls.

(Biography provided by New Hampshire Antique Co-op)
Applied Filters3 results
Creator:Varujan Boghosian
to
Item Ships From
3
Height
to
Width
to
3
2
1
3
10,211
2,532
2,173
1,655
2
1
1
1
1
Butterflies
By Varujan Boghosian
Located in Milford, NH
A fine abstract watercolor of butterflies by American artist Varujan Boghosian (b. 1926). Boghosian was born in New Britain, CT and after serving in the United States Navy, he attend...
Category 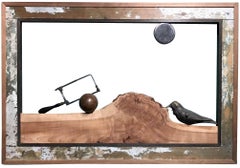 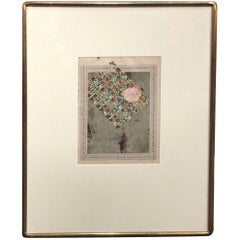 The Orb of Day
By Norio Azuma
Located in Milford, NH
Category