Robert Combas is a French painter and sculptor, born May 25, 1957 in Lyon. He is a successful living French artist along with Pierre Soulages. He has been pursuing a unique approach since the 1980s. His eccentric and powerful representations of the world make him one of the emblematic figures of French contemporary art. Combas’s work is now the subject of numerous retrospectives and institutional exhibitions. He brought at the dawn of the ‘80s a new figurative painting.

Present on the artistic scene since 1979, he is the creator of a movement that the artist Ben called the Free Figuration, a movement comprising Rémi Blanchard, François Boisrond, Robert Combas and Hervé Di Rosa. The artists of the free figuration take, through their works, the freedom to make all forms of art without borders of cultural genre and geographical origin, without hierarchy of values between high and low culture. Combas’s work, inspired by graffiti and comics, is at once casual and humorous, funny and sensual. Having just graduated from the Beaux-Arts of Montpellier, his work is recognized by the world of art. He then very quickly became the bandleader of the Figuration Libre movement invented by Ben. For the artist, “Figuration is to do as much as possible what you want most personally most freely”. And this freedom manifests itself in the variety of themes addressed and is felt in every detail of his works. He paints reality, but also reworks academic drawings. Painting made of liberties he speaks about the society, the violence, the sexuality, the suffering of the people, their small happiness, their littleness, their greatness. Combas is not a prisoner of a form of painting and his work is in perpetual evolution which is the subject of a first major retrospective at the Museum of Contemporary Art in Lyon.

“The search for the feeling, the feeling is the rhythm, it's the crazy drummer in the jungle and the voodoo dances, it's the Rolling Stones copying the old pieces of the blacks, the bluesmen and unintentionally, creating new music, it's a little like that for painting, having the rhythm of Chinese, Arabic and Mediterranean scriptures and paintings, my painting is rock,” says Robert Combas.

In 1982, the first solo exhibition of the artist took place in Paris and the same year he exhibited at the gallery in Amsterdam and in 1983 his first solo exhibition at the gallery Leo Castelli in New York took place. Following numerous exhibitions, including his first major solo exhibition at the ARCA in Marseille in 1984, in 1985 he had a retrospective at the museum of the Sainte-Croix abbey of Sables-d'Olonne and later at the Gemeente Museum in Helmond and in 1986 at the Museum of Art and Industry of Saint-Étienne. In the last quarter of the 20th century, Combas also took the risk of breaking with the theories and practices of the art of his contemporaries. The best way in other words to restore the truth about today. The artists like Robert Combas, Jean-Michel Basquiat, Keith Haring and Ouattara Watts popularize a free figuration. The works of Combas, Di Rosa, Basquiat and Keith Haring seem animated by a powerful and lively wave. Combas is now living and working in Paris. 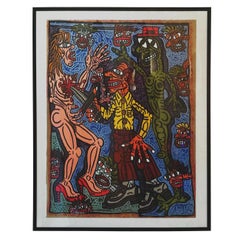 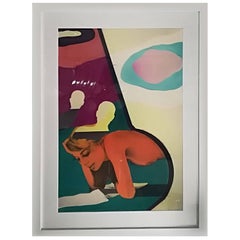