The Peruvian artist, Renzo Barchi, was born in Lima. He began his studies at the Pontificia Universidad Católica and then, in 1987, he went to the United States to complete his studies at the Slippery Rock University in Slippery Rock, Pennsylvania. He obtained a Master's degree in arts and then a Master of fine arts at the University of Stephen F. Austin, in Nacogdoches, Texas. He later moved to Houston, where he established his studio. Barchi’s academic experience includes being a drawing and sculpting instructor at the Art League in Houston, Texas. He is also a member of the Contemporary Art Museum, Houston; the Art Museum of South Texas, Corpus Christi, Texas; the Texas Fine Arts Association of Austin, Texas; the Texas Accountants and Lawyers for the Arts, Houston, Texas; the Art League Houston; and Stephen F. Austin State University Alumni Association and the Associated Artists of Pittsburgh. Barchi is affiliated with the art galleries McMurtrey Gallery, Houston, Texas; Synergies in Art, Santa Fe, New Mexico; and M.T. Burton Gallery, Surf City, New Jersey. Barchi is represented by Giacobbe-Fritz Fine Art in Santa Fe, New Mexico, United States. 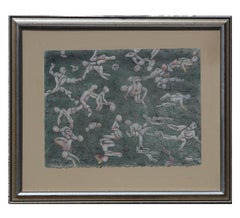