Remo Brindisi is considered one of the greatest Italian artists of the 20th century. Involved in the artistic environment since childhood, he has studied at the Penne School of Art, where his father taught sculpture, the Rome University of Fine Arts and at the Institute of Art for Book Illustration. Brindisi fought with the Italian army during the Second World War and moved to Florence, where he came into contact with many artists of the time such as Carena, Soffici and Rosai. Brindisi’s painting is strongly expressionist with informal tendencies and imbued with social and political purposes. The recurring subjects are motherhood, shepherd children, opponents and the Venetians represented as nightmares, the result of the traumatic events caused by war, horror and guilt. The Milanese years (since 1947) are characterized by a cubist flattening, which is the result of the controversy between realists and abstractionists and its integration into the Linea group. In 1970, Brindisi founded the Alternative Museum in Lido di Spina, where he collected works by contemporary Italian and foreign artists. He was appointed president of the Milan Triennale and was awarded the gold medal of public education for cultural merits. 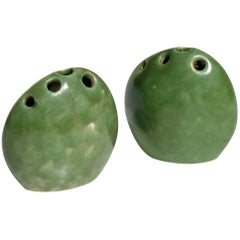 1960s by A. Mangiarotti for Brambilla Space Age It, Design Pottery Ashtray Bowl
By Angelo Mangiarotti, Fratelli Brambilla
Located in Brescia, IT
Category

1960s by A. Mangiarotti for Brambilla Space Age It, Design Pottery Ashtray Bowl