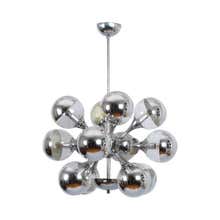 Founded in Italy in 1957 by Goffredo Reggiani, whose family still runs it, Reggiani Illuminazione today is an international company recognized as one of the world’s foremost producers of LED fixtures. Along with Venini and Kartell, the firm was part of the Italian design renaissance that took place in the middle of the last century, introducing exuberant new forms and colors for modern interiors. While Kartell and Venini specialized in plastic and glass, respectively, Reggiani has always focused on lighting, pioneering innovative technologies for every type of illumination, from wall sconces to track lights.

Reggiani rose to prominence in the 1960s with its introduction of sleek, sophisticated lighting fixtures made from wood, glass, and metal. This pair of sconces with frosted glass shades is typical of the firm’s early offerings, combining the warmth of teak — very popular at the time, thanks to the success of Danish modern furniture and accessories — with a futuristic silhouette free of embellishment. Throughout the 1960s and ‘70s, Reggiani’s chandeliers and pendant lights grew increasingly adventurous in design. Its Space Age line, featuring vivid hues and bold geometric forms, such as the cluster of spheres in this Sputnik chandelier, reflect the contemporary fascination with the space race, which influenced the design, popular culture and even fashion of the era. Inthe late 1970s, Reggiani began using acrylics in pieces like this bright orange table lamp.

Starting in the 1970s, the firm introduced the first low-voltage line of halogen lamps in Europe and, in the 1980s, debuted the Downspot. The first fully adjustable recessed electric lighting fixture, the Downspot became a popular design for track lighting, enabling architects and designers to customize illumination as never before. Today, Reggiani is at the forefront of LED lighting. In 2009, it launched the LED Luce system, which is now used in a variety of public spaces, including libraries, museums and showrooms. The firm’s Ambar fixtures were chosen for Rogers Stirk Harbour + Partners’s installation at the 15th International Architecture Exhibition of the Venice Biennale.

Wood Reggiani Sconce
By Reggiani
Located in Los Angeles, CA
1960s Italian wood and glass sconce by Reggiani of Italy. Molded teak wood and blown glass heart shaped sconce with 1 E26 medium based socket. Wired for use in the US. Lightbulbs inc...
Category

Ceiling Light Fixture, Signed Reggiani, Made in Italy, circa 1970
By Reggiani
Located in Jersey City, NJ
Ceiling fixture in interlacing, white rubber coated metal with a black rubber border. The corners are rounded and the center is dome-shaped with a single socket. A cylindrical, chrom...
Category

Ceiling Light Fixture, Signed Reggiani, Made in Italy, circa 1970

Pair of Table Lamps by Reggiani

1970s Space Age Chromed Metal and Opaline Italian Chandelier by Reggiani
By Reggiani
Located in Aci Castello, IT
A mid-century twelve lights chandelier made in Italy in the Seventies, it's in good conditions and in working order, it works 110-240 volts and needs twelve regular bulbs.
Category

Reggiani Three Chrome Convex Disc Wall Sconce, 1970s, Italia
By Goffredo Reggiani, Reggiani, Reggiani Lampadari
Located in St- Leonard, Quebec
When lighted it project on the wall surface a ghostly, aura like effect from under and on the outer edge of the CAP, leaving the sconce itself in the shadow. Each disc measure 11...
Category

Pair of Italian Chrome Table Lamps by Reggiani, circa 1968

Stunning Pair of Chrome Wall Lights by Reggiani, Italy, 1960s
By Reggiani
Located in London, GB
Pair of Italian wall lights in chrome with opaline glass shades by Goffredo Reggiani produced by Studio Reggiani. Made in Italy from the 1960s.
Category

20th Century Gio Ponti Floor Lamp in Perforated Aluminium and Steel by Reggiani
By Reggiani, Gio Ponti
Located in Turin, IT
Very beautiful Floor Lamp designed by Gio Ponti in '70s for Reggiani. The floor lamp has a very simple geometric line, it is as a cylinder with its base and its top in steel, and the...
Category

Pair of Bedside Lamps by Reggiani

Pair of Travertine Lamps by Reggiani for Raymor

Midcentury Reggiani Italian Round Steel and Bevelled Wall Mirror, 1960s
By Reggiani
Located in Roma, IT
Amazing midcentury steel wall mirror and bevelled wall mirror. This incredible item was produced in Italy in the 1960s. This striking piece has a wonderful round steel frame and a...
Category

Pair of Sconces by Reggiani
By Reggiani
Located in Los Angeles, CA
Pair of sconces by Reggiani. Manufactured in Italy, circa 1970s. Brass-plated chrome. Rewired for US junction boxes. Each light takes one E27 75w maximum bulb. Bulbs provided as a on...
Category

Pair of Sconces by Reggiani

Italian Arc Floor Lamp by Goffredo Reggiani
By Reggiani
Located in Los Angeles, CA
Italian Arc lamp from the 1960 s consisting of a heavy metal base with brushed aluminum extendable arc and shade made of metal - aluminum. Floor lamp have adjustable arc reach and on...
Category

Chromed Reggiani Floor Lamp with Four Spotlights, circa 1970
By Reggiani, Goffredo Reggiani
Located in Rotterdam, NL
Chromed floor lamp by Goffredo Reggiani with four spotlights that can be moved independently. The shades that are made of chromed metal are coated white on the inside. The lamps has ...
Category

Studio Reggiani Balance Lamp Italy 1970
By Reggiani
Located in Etten-Leur, NL
Very nice articulating ceiling balanced lamp made by Studio Reggiani, Italy 1970. This lamp has an extendable chrome plated arm and an aluminium shade. This is an amazing lamp for mu...
Category

Italian Floor Lamp with Four Lights by Reggiani in Chrome and Black, 1970s
By Reggiani
Located in Clivio, Varese
Beautiful floor lamp manufactured by Reggiani, Italy, in the 1970s. With manufacturer's print under the lamp. The four legs are painted in black, the light spots and the floor pla...
Category

Italian Floor Lamp with Four Lights by Reggiani in Chrome and Black, 1970s

Green Pendant or Table Lamp by Reggiani, 1970s
By Reggiani
Located in Rotterdam, NL
Extraordinary lamp by Reggiani, designed and produced in the 1970s. The lamp can be used as a table lamp, a pendant (it can be hung using the electrical wire or, naturally, the hook ...
Category

Reggiani Furniture for sale on 1stDibs.

Reggiani Furniture is available on 1stDibs for sale. These distinctive objects are frequently made of metal and designed with extraordinary care. In our collection of Reggiani furniture there are many options to choose from, although black editions of this piece are particularly popular. We have 86 vintage editions of these items in-stock, while there is 0 modern edition to choose from as well. Many original furniture by Reggiani were created in Europe during the 20th century in the Mid-Century Modern style. If you are looking for additional options, many customers also consider Furniture by Poliarte Furniture, Esperia Furniture and Goffredo Reggiani Furniture. Reggiani Furniture prices can vary depending on size, time period and other attributes. The price for these items starts at $475 and tops out at $17,000, while pieces like these can sell for $2,500 on average. .