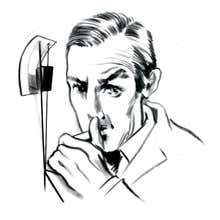 The architect Pierre Guariche (1926–95) was one of the leading modern furniture and lighting designers of postwar France. Guariche can, in some ways, be thought of as the French version of Charles Eames: with his lean and angular chairs and slender, sculptural lamps, he helped introduce a new aesthetic to the country’s interiors — and he was an eager pioneer in the use of new industrial materials and production techniques that emerged in the 1950s.


Guariche studied at the École Nationale Supérieure des Arts Décoratifs in Paris (the national design academy) under René Gabriel — a designer, known for his quality, mass-produced furnishings, who served as a director of the postwar Ministry of Reconstruction. Two years after graduating in 1949, Guariche opened his own design firm, and he was soon creating pieces for numerous companies, including the lighting manufacturer Disderot.


Wood and metal were rationed in the years following the war and Guariche learned to do more with less. His chairs of the early 1950s include several designs with narrow, softly angular wooden frames; others, like the Tonneau chair, feature a single piece of molded plywood set atop metal legs. His lamps of the period are likely his best-known works. They include delicate compositions of slender steel tubes, and more flamboyant pieces such as the Kite lamp, with its curved metal reflector panel.


Always on the lookout for new materials, Guariche spent several years in the mid-1950s operating a firm making furniture in fiberglass and other plastics, along with Joseph André Motte and others. After 1957 — when Guariche was named head of design for the Belgian company Meurop and given a brief to create stylish, up-to-date chairs and cabinets — he began to look to America for ideas. In the mid-1960s, he produced several lines of deeply upholstered, rounded lounge chairs inspired by the space-age look, and gave them names like Jupiter, Polaris, and Luna. While Guariche always kept pace with his times, throughout his career he showed a consistent talent for producing elegant, eye-catching forms using a minimum of materials.

Pair of Chairs by Paul Geoffroy and Pierre Guariche

Pair of Armchairs by Pierre Guariche, 1953

Tonneau Chairs by Pierre Guariche for Steiner, 1950s Set of 6
By Pierre Guariche, Steiner
Located in Lasne, BE
Set of 6 black leather chairs. Small wear and tear due to time (see photo).
Category

Tonneau Chairs by Pierre Guariche for Steiner, 1950s Set of 6

Rare Pierre Guariche Lounge or Easy Chair with Armrests
By Pierre Guariche
Located in Amsterdam, NL
Beautiful and very rare lounge or easy chair by Pierre Guariche, newly upholstered, powder coated, sanded and lacquered according to the original state. The upholstery is the finest ...
Category

Pair of Armchairs by Pierre Guariche

Pair of Armchairs by Pierre Guariche, 1953

Set of 6 Tonneau Chairs by Pierre Guariche for Steiner, 1954