Piero Manzoni was born on 13 July 1933 in Soncino, in the province of Cremona. He grew up in Milan, spending the summer holidays in Albissola Marina, in Liguria. In 1956, Manzoni made his debut at the IV Fiera market of the Sforzesco Castle in Soncino. The following year, he took part in the “Arte Nucleare” exhibition at the Museo San Fedele in Milan, he painted anthropomorphic silhouettes and paintings with imprints of objects. Starting from the following year, he made the first Achromes, large white surfaces soaked in glue and kaolin (a white clay used in the production of ceramics). In 1958, he exhibited together with Lucio Fontana and Enrico Baj and began collaborating with Enrico Castellani and Agostino Bonalumi. In 1959, he founded the Azimuth magazine and the homonymous gallery. Manzoni’s style becomes increasingly radical. It goes beyond the surface of the painting and proposes a series of provocative works, intolerant of tradition such as the lines drawn on strips of paper, rolled up and closed in a cardboard tube, the air bodies and the artist’s breath (balloons containing Manzoni’s breath), the sculpture eggs authenticated by his fingerprints and the Magic Bases, pedestals on which anyone could become a work of art. He also creates new Achromes using the most varied materials: from fiberglass to plasticized loaves, some strictly white, others in phosphorescent colors. On July 21, 1960, Piero Manzoni presented one of the most famous performances at the Azimut Gallery in Milan, the Consuming of the dynamic art of the public devouring art. The artist signs some hard-boiled eggs with the thumbprint which are consumed on the spot by the public. In 1961, at the La Tartaruga Gallery in Rome, Piero Manzoni signed human beings for the first time, transforming them into living sculptures. In the same year, he put on sale the boxes of Merda d’artista made according to the concept that the artist’s signature is able by itself to transform anything, even biological waste, into art. In the wake of the broader dictates of Conceptual Art, Manzoni identifies in the idea that precedes the work as the true essence of the work itself, because the project and the formation of thought are the true artistic products, the work is only a material translation of a discourse and a philosophical reflection. Manzoni makes his very personal contribution to re-founding the concept of art and reality by eliminating all traditional cultural, ethical and moral practices, to leave room for thought and more intense experimentation. He died in 1963 in his Milan studio. 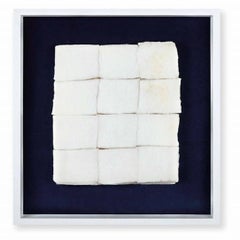 Related Items
For Aspera - Mixed Media on Table by Marco Amici - 1996
By Marco Amici
Located in Roma, IT
Category

Fracture - Mixed Media on Canvas by Marco Amici - 1993
By Marco Amici
Located in Roma, IT
Category 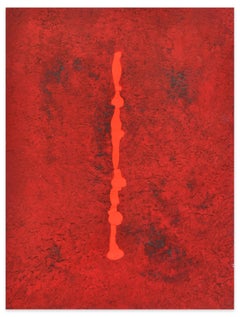 Mutation - Ceramics and Mixed Media by Michele Cossyro - 2011
Located in Roma, IT
Category