Peter Hurd was born on February 22, 1904. He left his birthplace of Roswell, New Mexico in 1921 after receiving a senatorial appointment to West Point. He left the academy after only two years to pursue a career, not as a soldier but an artist. Hurd sought out N.C. Wyeth in Chadds Ford, Pennsylvania and studied as his private pupil. Undaunted by Wyeth’s warning that studying under him would be much tougher than attending West Point, Hurd accepted the challenge and studied alongside Wyeth and his children for 10 years. All the Wyeths were quite taken by this handsome, energetic young man in cowboy boots and hat, but none so much as Wyeth’s eldest daughter, Henriette, who married Hurd in 1929. After a decade on the east coast, Hurd longed for his independence and a return to the West. These desires ultimately led the couple, along with their growing family, to San Patricio, New Mexico where they spend the rest of their lives. The landscape of New Mexico inspired Hurd and it was here that he developed his true artistic style. Hurd became celebrated for egg tempera, watercolors and lithographs depicting the New Mexico way of life in the form of landscape and portraits. The rush against time not only challenged Hurd but also led to his creation of field sketches. These sketches were done quickly with watercolor or pen and wash. It was often from his field sketches that Hurd created his detailed tempera and watercolors. Despite his growing popularity as a regional artist, Hurd’s adventurous spirit took him all over the world. His first major excursion took place in the mid-1940s when Hurd left home to serve as an illustrative war correspondent for LIFE Magazine. The resulting wartime works varied from field sketches to fully developed egg tempera and watercolors. Many of these war sketches now hang in the Pentagon. After the war, Hurd traveled to North Africa, Asia and Saudi Arabia, where Hurd befriended and painted King Faisal. These locales made for intriguing works, however, none would bring Hurd as much attention as when he was asked to paint President Johnson’s official portrait. The portrait was notoriously rejected by the president, which generated a great deal of media attention, making Hurd a household name. From his humble beginnings as a Wyeth pupil to his success as a southwest artist, Hurd never lost his commitment to the canvas. Hurd continued to be passionate about his painting career until his death in 1984 but his undying philosophy and legend still live on to this day. 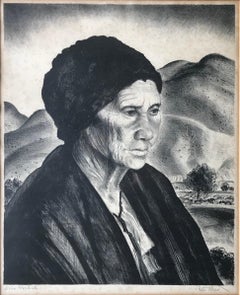 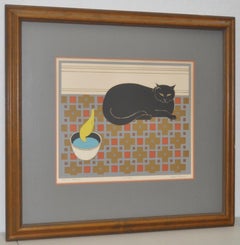 Will Barnet
Will Barnet "Cat and Canary" Pencil Signed Lithograph c.1970, Circa 1970