Paul Desire Trouillebert was born in Paris in 1829. He attended the École des Beaux-arts, where he studied under Antoine Auguste Ernest Hébert and Charles Jalabert. The young artist developed a passion for portraits and nude figure studies. He debuted at the Salon in Paris in 1865 with Portrait of Mademoiselle A. Shortly thereafter, Trouillebert received a near-continuous flow of portrait commissions from important clients. He was also renowned for completing a remarkable set of historical works that depicted the building of the railways around Paris in the 1880s. By the 1870s, Trouillebert, like many of his contemporaries, was inspired by the works of the Barbizon school. His oeuvre broadened to encompass the pastoral, riparian landscapes near and around Paris. Trouillebert depicted figures embedded in the surrounding landscape, sunsets over fields, and riverbanks bathed in the atmospheric morning light. He utilized a subtle, muted palette and often worked en plein air and on the panel. Trouillebert drew inspiration from scenes of rural life as well as the rich folk traditions of small French towns. As the critic Theodore de Banville wrote of Jean-Baptiste Camille Corot in 1861, “this is not a landscape painter, this is the very poet of landscape, who breathes the sadness and joys of nature.” Trouillebert’s sense for nuances, the subtlety of his silvery grey-greens, and his effective use of mist prompted many to compare him to Corot. Although Trouillebert was amply inspired by Corot’s themes, he added his distinctive atmosphere to each painting, especially in his scenes of fishermen on the riverbanks of France. His works are on display at the Musée des Beaux-arts, Reims; the Musée d’art histoire et archéologie, Evreux; the Musée Crozatier and Musée des Beaux-arts, Dijon; theMusée des Beaux-arts de Rouen; theMusée des Beaux-arts de Dole; the Musée Cantini, Marseilles; theMusée des Beaux-arts et Musée Marey; the State Hermitage Museum, St. Petersburg, Russia; the Metropolitan Museum of Art, New York; the Cleveland Museum of Art and the Walters Art Museum, Baltimore.

Moulin sur la vienne , oil on canvas , signed lower left
By Paul Desire Trouillebert
Located in Barbizon, FR
He exhibited several portraits in the Salon of 1865 and his first landscape in 1869. Much inspired by Corot, most of his landscapes, apart from his very early ones, were painted in t...
Category 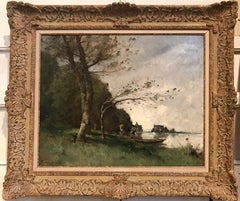 Paysage à Picquigny sur Somme
By Paul Desire Trouillebert
Located in Barbizon, FR
listed on the catalogue raisonné under number 0215 page 285. oil painting representing a landscape on the North of France near to the river "La Somme", with figures and cows .
Category 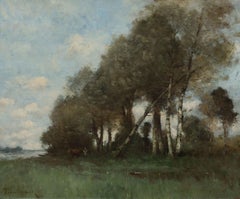 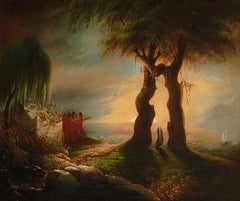 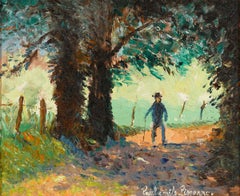 In the Sheds, Swindon
By David Shepherd
Located in New Orleans, LA
Category

The Education of Achilles by Auguste-Clément Chrétien
Located in New Orleans, LA
Category