Paul Barces, also referred to by the pseudonym DUAL, stands for the conflict between “street art” and “fine” art, between freeway burners and gallery exhibitions, between mass recognition and total anonymity. His bold lines and fresh colors are a break from the everyday monotony of life in the city — a taste of urban subculture, whether you asked for it or not. While one may not have a choice in where and when they encounter a DUAL piece, DUAL leaves it up to the observer to assign meaning to his work. By operating under a pseudonym, he lets his audience write their own narrative for who he is and the message he is trying to get across.

Perhaps best known for his work with wheat paste, particularly since his feature in the 2011 wheat pasting documentary Stick ‘Em Up!, DUAL has never been one to confine himself to a particular medium, background, or context. He has been recognized not only for his work with silkscreen and spray paint, but also for his work with lithography and acrylics. Although his obsession with “making marks” stems from his background in graffiti, he has translated that into a passion for creating art. His “art” includes everything from large-scale murals to micro-painting projects such as model trains and custom watch dials to the forgotten art of sign painting. Most recently, his focus has been on gestural character studies with mixed-media on canvas — creating quite the dichotomy between the “street” artist and the “fine” artist. In addition to being a constant presence on the street and a fixture in the Houston art scene since 2005, DUAL has also pursued a formal arts education and his work has seen more than its fair share of gallery walls.

(Biography provided by Reeves Antiques)
Applied Filters2 results
Creator:Paul Barces
to
Item Ships From
2
Height
to
Width
to
2
2
2
10,199
2,532
2,175
1,667
2
2
2
2
1
"Domino Mark" Street Art Gestural Abstract
By Paul Barces
Located in Houston, TX
Gestural contemporary street art painting was done using spray paint on raw canvas. The edges of the work are painted hot pink, and when the work is hung on a light-colored wall it c...
Category 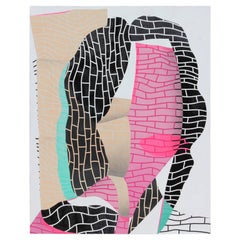 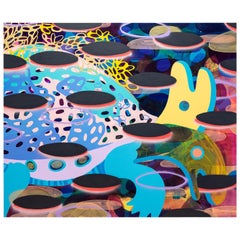 "Out of the Blue" Abstract Blue Toned Collage
By Paul Shapiro
Located in Houston, TX
Category

Paul Shapiro
"Out of the Blue" Abstract Blue Toned Collage, 2000