Orazio Andreoni was an Italian 19th-century sculptor and professor based in Rome whose works in marble were of antique subjects as well as his compositions which were often historical or romantic works. These found their way to American and English collectors alike. He exhibited Le Pharisien in Turin in 1883 and Negrése in Berlin 1892. He also exhibited in Glasgow in 1888 and is believed to have been active for a time in America since a file on him is in the Smithsonian Institution Library. Andreoni's works can also be found in several museums and public parks. L'aveugle Nidia and Le Pharisien are currently at the Sydney Museum in Australia. A very large marble fountain group of multiple sculptures representing Oceanides, the Greek water nymphs, which were associated more with fresh water than with the oceans, is currently at The York House Garden, Twickenham, South-West London, now a municipal park. A marble group titled Pereat is at the Wadsworth Museum in Hartford, Connecticut.

He Loves Me, He Loves Me Not by Orazio Andreoni, circa 1885
By Orazio Andreoni
Located in Salt Lake City, UT
Orazio Andreoni was an Italian 19th sculptor and professor based in Rome whose works in marble were of subjects after the antique, as well as his own compositions which were often hi...
Category

He Loves Me, He Loves Me Not by Orazio Andreoni, circa 1885 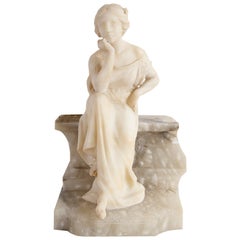 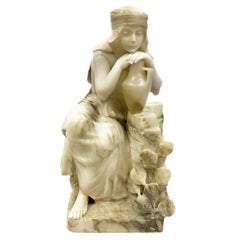