Miguel Acevedo was born in 1947. He grew up in the countryside near Cordoba, Spain, where his father worked as a warden on a country estate. He attended state school there, and from an early age, his only true interest in school was drawing. At art school, Acevedo learned quickly and his talents progressed allowing him to complete the four-year course in two years at the young age of 14. Acevedo’s drawing skills had advanced enough for him to begin experimenting with oil paints. When he was 16, he joined the staff of a painting workshop. In 1971, he left the workshop and set up his studio, where he learned from friends of a movement of painters in the north of Spain. There, he discovered new landscapes to paint and moved to a local village to paint. In 1977, the Walt Disney Corporation recruited him to teach their artists how to capture natural light. Acevedo states that, when looking at a painting, he expects to find good draftsmanship, composition and freshness. He respects abstract art, but does not feel it and states that “you can not paint if you do not know how to draw. Drawing is the skeleton. Drawing is everything.” In 1991, he moved north of Madrid, where the Sierra de Guadarrama Mountains are in constant view. He often visits farms to study and paint the bulls. Through Acevedo’s work, we find ourselves suspended in time, suddenly captured by the essence of a moment. He creates a scene, where the viewers can only react, our senses and emotions rise while we look through his window. His natural use of color and lighting is as if he extracted the raw elements of the earth and placed them on a canvas.

(Biography provided by R Alexander Fine Art)
Applied Filters3 results
Creator:Miguel Acevedo
to
3
Item Location
3
Height
to
Width
to
1
3
3
10,082
2,536
2,281
1,744
3
3
3
3
"Toro Bravo" by Miguel Acevedo 21 x 32 inches Oil on Canvas
By Miguel Acevedo
Located in Atlanta, GA
Item has only been displayed in a gallery setting and is in excellent condition. The framed dimensions measure approximately 29.5 x 40 inches. Miguel Acevedo was born in 1947. He gr...
Category 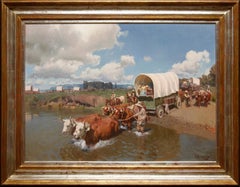 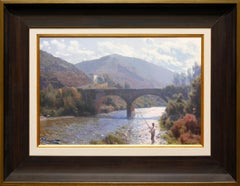 Into the Wild
By Mario Jung
Located in Atlanta, GA
Category

Mario Jung
Into the Wild

"Outside of Town" by Antonio Huerta 20 x 26 inches Oil on Canvas
Located in Atlanta, GA
Category