Michael Frary was born in Santa Monica, California on May 28, 1918. His father died when Michael was six months old. Relatives from the east moved him, his mother and siblings from California to Florida. He graduated from Palm Beach High School in 1934 and returned to California where he accepted a swimming scholarship from the University of Southern California. During his time at USC, he became a champion swimmer and captain of the USC varsity water polo team. In 1940, he graduated with a bachelor of architecture degree and a master of fine arts in painting the following year. At the outbreak of World War II, Fraryjoined the United States Navy, eventually receiving his discharge as Lieutenant at the war's conclusion in 1945. Upon his return to California, he became assistant art director first for the Goldwyn Studios, Paramount and then finally Universal Studios. His hectic lifestyle, although glamorous, did not allow him enough time to pursue his love of painting. To fulfill this need Frary began teaching night classes in painting. Shortly thereafter UCLA offered a full-time teaching position and he made a permanent break from art director to painting instructor. During his teaching career in California, Frary also taught at Los Angeles City College and the Chouinard Art Institute.

In 1949, Frary moved to Texas to serve as the artist in residence and faculty chairman for the irrepressible Marion Koogler McNay in San Antonio. He taught at her burgeoning art school for several seasons. It was during this time in San Antonio that he met Peggy Mathewson who he married in 1950. He accepted a teaching position as an assistant professor with the University of Texas at Austin, which named him Professor of Art in 1970 and upon his retirement from teaching in 1986 he was named Professor Emeritus of Art. Frary’s artwork and love for the state in which he lived for more than half a century resulted in the publication of three books: Impressions of the Big Thicket, University of Texas Press, 1973, Impressions of the Texas Panhandle, Texas A&M University Press, 1977 and Watercolors of the Rio Grande, Texas A&M University Press, 1984. Through his writing and watercolors, these books vividly convey the breadth and scope of the land that provided his inspiration. In pursuit of this inspiration, Frary and his wife, Peggy also traveled across the United States, South America, South Africa, England, Mexico, Italy and France.

During his career, Frary received over 175 awards and purchase prizes and earned over 200 one-man exhibitions.  During his career spanning almost 70 years, Frary influenced the course of art, not only in Texas, but in the United States as well. He was a seminal figure in the art movement known as modernism and with his contemporaries on the faculty of the Art Department at the University of Texas, he changed the face of art on a national scale. Now widely celebrated as a Texas Modernist, Frary’s influence has also shaped the lives and careers of the countless thousands of students whom he taught both in a classroom setting and through hundreds of watercolor seminars and workshops throughout the southwest. Frary’s works are housed in 100s of private and public collections worldwide including the National Museum of American Art, Smithsonian Institute, the Los Angeles County Museum, the Santa Barbara Museum of Art, the Virginia Scott Museum, Pasadena. His works are also housed in The Springfield Museum of Art, the Virginia Museum of Fine Arts, the Phillips Petroleum Building, the Dallas Museum of Fine Art, the Panhandle-Plains Museum, Museum of the Big Bend, the Amarillo Art Center, McNay Art Museum, the Texas Instruments Collection, the Austin Museum of Art and the University of Texas at Austin.

Frary also received many important commissions, which included, among others, the selection of his painting, Antelope Country by the National Gallery for presentation by President and Mrs. Lyndon B. Johnson to the New Zealand Prime Minister and his wife at the Manila Conference. He was also commissioned in 1972 by the U.S. Department of Interior to paint at reclamation sites in four states, resulting in four of his paintings being shown at an exhibition at the National Gallery. In 1974, the Austin Chapter of the American Institute of Architects awarded Frary the Medal of Honor and the Texas Society of Architects presented him with the Citation of Honor, both in recognition of his book Impressions of The Big Thicket. In 1978, he was commissioned to paint the Psyche Prize for the Fourth Biennial International Film Festival of Canada. Frary died on Tuesday, August 30, 2005. 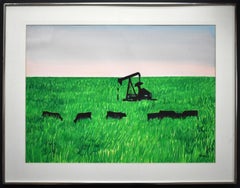 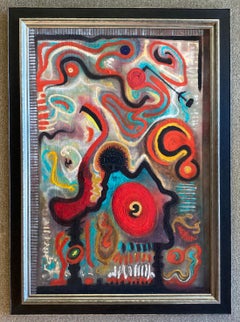 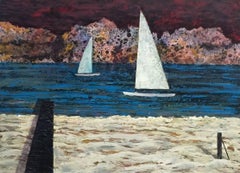 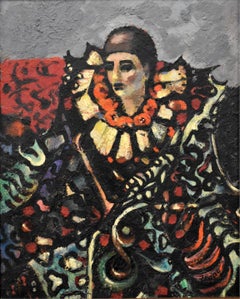 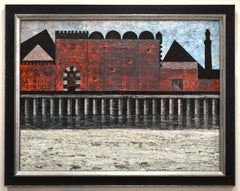 Janet Lippincott
I AM IN ORBIT MID CENTURY MODERN SANTA FE MODERNIST, Circa 1970

H 15 in. W 12 in. D 2 in.
Abstract Impressionist Facade with Windows Painting
By Michael Frary
Located in Houston, TX
Neutral tonal abstract impressionist painting of a facade with windows by artist Michael Frary. The work is signed by the artist and is framed in a silver wooden frame. Dimensions wi...
Category

1stDibs offers a wide variety of authentic Michael Frary art for sale. You can also browse by medium to find art by Michael Frary in watercolor, oil paint, paint, and more. Much of the original work by this artist or collective was created during the 20th Century and is mostly associated with the Modern style. Not every interior allows for large Michael Frary art, so small editions measuring 14 inches across are available. Those interested in this artist might also find the works of Frank Freed, John Hartell and August Mosca. Michael Frary art prices can differ depending upon medium, time period and other attributes. On 1stDibs, the price for these items starts at $1,200 and tops out at $17,000, while the average work can sell for $3,500.