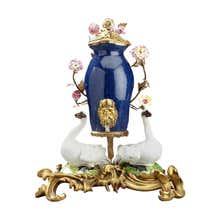 Meissen Porcelain (Staatliche Porzellan-Manufaktur Meissen) is one of the preeminent porcelain factories in Europe and was the first to produce true porcelain outside of Asia. It was established in 1710 under the auspices of King Augustus II “the Strong” of Saxony-Poland (1670–1733), a keen collector of Asian ceramics, particularly Ming porcelain. In pursuing his passion, which he termed his “maladie de porcelaine,” Augustus spent vast sums, amassing some 20,000 pieces of Japanese and Chinese ceramics. These, along with examples of early Meissen, comprise the Porzellansammlung, or porcelain collection, of the Zwinger Palace, in Dresden.


The king was determined, however, to free the European market from its dependence on Asian imports and to give European artisans the freedom to create their own porcelain designs. To this end, he charged the scientist Ehrenfried Walther von Tschirnhaus and aspiring alchemist Johann Friedrich Böttger with the task of using local materials to produce true, hard-paste porcelain (as opposed to the soft-paste variety European ceramists in the Netherlands, Germany, France, Italy and Spain had been producing since the late Renaissance). In 1709, the pair succeeded in doing just that, employing kaolin, or “china clay.” A year later, the Meissen factory was born.


In its first decades, Meissen mostly looked to Asian models, producing wares based on Japanese Kakiemon ceramics and pieces with Chinese-inflected decorations, called chinoiseries. During the 1720s its painters drew inspiration from the works of Watteau, and the scenes of courtly life, fruits and flowers that adorned fashionable textiles and wallpaper. It was in this period that Meissen introduced its famous cobalt-blue crossed swords logo—derived from the arms of the Elector of Saxony as Arch-Marshal of the Holy Roman Empire—to distinguish its products from those of competing factories that were beginning to spring up around Europe.


By the 1730s, Meissen’s modelers and decorators had mastered the style of Asian ceramics, and Augustus encouraged them to develop a new, original aesthetic. The factory’s director, Count Heinrich von Brühl, used Johann Wilhelm Weinmann’s botanical drawings as the basis for a new line of wares with European-style surface decoration. The Blue Onion pattern (Zwiebelmuster), first produced in 1739, melded Asian and European influences, closely following patterns used in Chinese underglaze-blue porcelain, but replacing exotic flora and fruits with Western varieties (likely peaches and pomegranates, not onions) along with peonies and asters.


During the same period, head modeler Joachim Kändler (1706–75) began crafting delicate porcelain figures derived from the Italian commedia dell’arte. Often used as centerpieces on banquet tables and decorated to reflect the latest fashions in courtly dress for men and women, these figurines, they were popular in their day, and are still considered among of Meissen’s most iconic creations. Kändler also created the Swan Service, which, with its complex low-relief surface design and minimal decoration is considered a masterpiece of Baroque ceramics.


The rise of Neoclassicism in the latter half of the 18th century forced Meissen to change artistic direction and begin producing monumental vases, clocks, chandeliers and candelabra. In the 20th century, Meissen added to its 18th-century repertoire decidedly modern designs, including ones in the Art Nouveau style. The 1920s saw the introduction of numerous animal figures, such as the popular sea otter (Fischotter), which graced an East German postage stamp in the 1960s. Starting in 1933, artistic freedom was limited at the factory under the Nazi regime, and after World War II, when the region became part of East Germany, it struggled to reconcile its elite past with the values of the Communist government. In 1969, however, new artistic director Karl Petermann reintroduced the early designs and fostered a new degree of artistic license. Meissen became one of the few companies to prosper in East Germany.


Owned by the State of Saxony since reunification, in 1990, Meissen continues to produce its classic designs together with new ones developed collaboratively with artists from all over the world. In addition, through its artCAMPUS program, the factory has invited distinguished ceramic artists, such as Chris Antemann and Arlene Shechet, to work in its studios in collaboration with its skilled modelers and painters. The resulting works of contemporary sculpture are inspired by Meissen’s rich and complex legacy.

Meissen Model of an Elephant

Set of 6 Meissen Porcelain Dessert Plates, White, Hand Painted Birds, 1852-1870
By Meissen Porcelain
Located in London, GB
This is a beautiful and very charming set of 6 small dessert plates made by Meissen between 1852 and 1870. Two of the six plates are slightly smaller than the others, but they all ha...
Category

Meissen Porcelain Wall Sconces
By Meissen Porcelain
Located in New Orleans, LA
This remarkable pair of Meissen wall sconces is crafted with all of the exquisite detail and splendor of the Rococo period. Exquisitely hand-painted with gilt accents, each fixture i...
Category

Meissen Autumn and Summer Porcelain Urns
By Meissen Porcelain
Located in New Orleans, LA
Displaying a level of porcelain artistry unlike anything we have ever seen before, this spectacular pair of Meissen urns truly epitomizes the majesty of Meissen. Standing over four f...
Category

Meissen Small Bust Emblematic of Winter, circa 1750
By Meissen Porcelain
Located in Firenze, IT
As a bearded man wearing a fur-lined green cloak, the pedestal with moulded and gilt formal borders, 11cm high, crossed swords mark in underglaze-blue to rear of base.
Category

Meissen Two-Light Candelabra
By Meissen Porcelain
Located in New Orleans, LA
This outstanding pair of two-light Meissen candelabra is inspired by Greek mythology. Crafted with the exquisite detail for which Meissen is renowned, the lights depict Hebe and Gany...
Category

19th Century Meissen Figurine
By Meissen Porcelain
Located in Plymouth, MA
Lovely example of Meissen at it's best. This figurine of a beautiful woman with a basket of flowers is incredibly detailed. From the lace trim on her dress to the tiny flowers in her...
Category

Pair of 19th Century Meissen Porcelain Parrots
By Meissen Porcelain
Located in Brighton, Sussex
A good quality pair of 19th century German Meissen porcelain parrots, each with wonderful bold colors and perched on a tree trunk, with branches of leaves coming off them. Blue cros...
Category