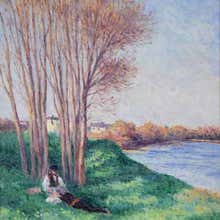 Maximilien Luce was born in Paris in 1858. In 1876 he apprenticed in the shop of the engraver Eugène Froment (1844–1900), a qualified craftsman and graduate of the Ecole des Arts Décoratifs. There, Luce worked on numerous illustrations for French newspapers and foreign periodicals.

In 1877, Luce left Paris and went to London. When he returned to France in 1879 he was called for military service. It was during his military service that Luce met Charles Emile Carolus-Duran (1837–1917), the famous French painter and sculptor who was an instructor to countless artists. Luce entered Carolus-Duran’s studio, a move that not only provided him with meticulous training as a draftsman but also introduced him to the leading painters of the time. Luce met Camille Pissarro (1830–1903), with whom he became very good friends and who gave Luce much artistic advice. Along with Pissarro, Georges Seurat (1859–1891) and Paul Signac (1863–1935), Luce was one of the founders of the Neo-Impressionist School (i.e., the Pointillists).

Luce joined the Société des Indépendants in 1887 and consistently participated in the avant-garde group’s exhibitions. Though landscapes made up most of his oeuvre, Luce executed some marvelous paintings of people in the Pointillist style, and this social realist aspect differentiated him from many of his fellow Neo-Impressionists. For a period of time, Luce was a strict Pointillist. After 1920, however, Luce started to paint in a freer manner. He accepted the position of President of the Société des Artistes Indépendants in 1935, a role from which he would eventually resign as a statement against the society’s growing posture towards restricting Jewish artists from exhibiting.

Luce made a significant contribution to exporting Neo-Impressionism and maintained strong ties with the Belgian Pointillist Théo van Rysselberghe (1862–1926). An indefatigable artist, he left a sizable amount of work in various mediums and remains a very important figure in French Post-Impressionist art. Maximilien Luce died in 1941.

Steamer at Sunset - Impressionist Oil, Boat in Seascape by Maximillien Luce
By Maximilien Luce
Located in Marlow, Buckinghamshire
A beautiful oil on board circa 1915 by French Impressionist painter Maximillien Luce depicting the silhouette of a steamer boat at sea as the sun sets. Signed with artist's cachet lo...
Category

Appareilleurs
By Maximilien Luce
Located in Marlow, Buckinghamshire
Oil on panel. Signed lower right. Maximilien Luce was a French Neo-Impressionist artist, known for his paintings, illustrations, and engravings. As a painter, Luce was initially inf...
Category

Le Depart - Man Gets off Horse
By Maximilien Luce
Located in Miami, FL
Le Depart Photo certificate from Denise Bazetoux confirms the authenticity of the work. Work is framed in an ornate girl reproduction frame Second supplement of the Catalogue Raison...
Category 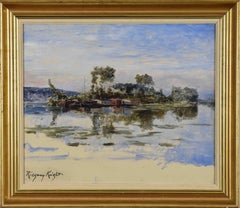 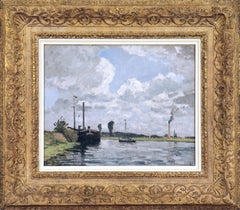