Mary Beale was one of the most successful professional female Baroque art portrait painters of the late 17th century. She started painting alongside her father, whose membership in The Painter-Stainers’ Company introduced her to the renowned court painter Peter Lely and many of his contemporaries. At 18, she married Charles Beale, a colour-mixer, Charles would stretch many of her canvases and mix pigments for work. Later, Charles would meticulously record Mary’s artistic process, clientele and technique, giving us a rare window into the world of a brilliant woman flourishing in a nearly exclusively male field. Mary would paint the noted physician Thomas Sydenham, who wrote The foundational medical text observationes medicae, the politician, William Pierrepont, John Lake, the Bishop of Chichester, John Tillotson, the Archbishop of Canterbury and John Maitland (1616–82), Duke of Lauderdale. Beale’s catalog became a who’s who of London’s most influential and she was prolific.

Pierre Gobert
Pair of 17th century portraits of Ladies of the French Court, 1690 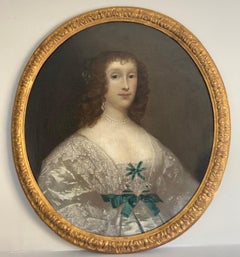 English 17th century portrait of a lady in an ivory silk gown on a terrace
Located in Bath, GB
Category

john-greenhill-2
English 17th century portrait of a lady in an ivory silk gown on a terrace, c.1670

Portrait of a Lady
By Sir Godfrey Kneller
Located in Bath, GB
Category

Previously Available Items
17th century Portrait of a Lady
By Mary Beale
Located in Bath, GB
Portrait of an elegant lady with long brown hair, seated in a landscape, wearing a blue silk gown with white chemise, a red cloak over one arm. This composition is based on a portrai...
Category

H 29.93 in. W 24.02 in.
17th Century Oil Painting Portrait of Chief Justice Sir Edward Lyttelton Munslow
By Mary Beale
Located in London, GB
Mary Beale was one of the most successful professional female Baroque-era portrait painters of the late 17th century. Mary started painting along side her father, who’s membership i...
Category

H 40.95 in. W 35.83 in.
Portrait of a Lady
By Mary Beale
Located in Bath, GB
Portrait of a lady, bust length, draped in a blue cloak with gold coloured trim over a white chemise under a classical style russet coloured overdress, her head turned slightly sidew...
Category

H 30 in. W 25 in.
Portrait of a Young Man
By Mary Beale
Located in Bath, GB
Circle of Mary Beale (Suffolk 1633 - 1699 London) Portrait of a young man, half length, set within a feigned oval stone cartouche, wearing a white shirt beneath a slashed sleeved b...
Category

Mary Beale
Portrait of a Young Man, Circa 1670