Margit Beck was born in Tokay, Hungary in 1918, and received her art education at the Institute of Fine Arts, Oradea Mare, Romania. Coming to the United States in the 1930s, she studied at the Art Students League in New York. During the 1940s, Miss Beck's style as a Cubist took form, making use of angular patterns while using the most striking contrasts by applying paint with the palette knife while using brilliant bursts of color amid prisms of light. Her early work utilized highly stylized figures in abstract form. By the mid-1950s, she became a MacDowell Fellow, and the time spent in the mountains of New Hampshire gave her a new perspective. She began to utilize dazzling incandescent colors and applied vibrating movements to ethereal scenes of forests, mountains and the universe. Each painting uses bold conceptions that are adroitly developed through the patterning of light and color into the congruity of design.

Margit Beck was no stranger to the American art scene. She had 22 solo shows, including Contemporary Arts Gallery (New York City), the Babcock Galleries (New York City) and ACA Galleries (New York City), all of which were met with widespread critical acclaim by newspapers and art publications. Miss Beck's paintings have been shown in nearly every major national as well as international exhibitions. She is represented in major permanent collections throughout the country. Miss Beck has been the recipient of some of the most prestigious awards and honors awarded in the art field including three Childe Hassam Fund Purchase awards (1968, '69, '71).

Miss Beck was a member of numerous art associations, including the National Academy of Design, where she received academician in 1975. In reviewing her work, the Herald Tribune wrote: "Painting becomes a God-like act, as Margit Beck recreates the breadth and wonder of the West's open spaces in imaginative canvases, that combine realist and abstract idioms with stunning effect. Aerial landscapes, mountain fastnesses, lowering storms are done with power, vision and verve that are close to breathtaking. Miss Beck's paintings, watercolors and drawings show a rarity of singular beauty and subtlety. Her imagery is based on complex aerial views of cities, farmlands and mountains, with their built-in geometric configurations and dizzying rush of space. Her work contains the contradictory, ambiguous elements of things seen from a great distance, but she distills from this telescopic approach a brilliant montage of shapes, stunningly distorted by space, yet enveloped by an overall logic, serenity and colorist quietude. It is Miss Beck's gift to make us experience her vertiginous heights without once disturbing the equilibrium required to see her paintings as first-rate works of art."

By the 1970s, Miss Beck's broad sweep of color indicating fields, hills and valleys were replaced by trees, clusters of farm buildings and the geometric grid of roads, fences and plowed fields, all put down with great attention given to the illusion of deep space. These canvases, huge in size (70" x 80"), give the viewer a sense that the landscape is a patchwork quilt of patterns, with her mountains undulating with the concentric rhythm of their contours, and her villages and farms, sparkling with a radiance of tiny jewels. In 1976 Miss Beck was diagnosed with Parkinson's disease. That, along with the death of her husband of 40 years, ultimately devastated the creative spirit that was essential in the creation of her mystical masterpieces. By 1984, it became impossible for her to hold a paintbrush, and ultimately, her body was ravaged by the deteriorating effects of her worsening condition. In 1997 she passed away. 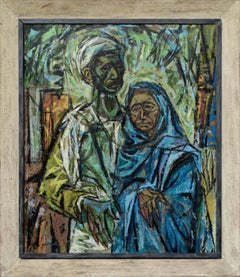 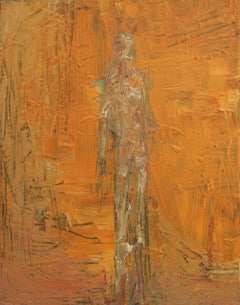