Lucien Adrion was born May 25, 1889, in Strasbourg, France. He was a French post-Impressionist painter, draftsman and printmaker known for his depictions of the French countryside and beaches, as well as Parisian life including landscape, still life, figure and landmarks paintings. He began his initial studies in Strasbourg as a technical draughtsman. In 1907, at the age of 18, he left his hometown Strasbourg and traveled to Paris, where he found employment in a large drafting company to work as a fashion illustrator. Adrion changed his mind upon arrival and rather than working for a large company, he decided to peruse his artistic career by traveling to London, Munich and Frankfurt. As the World War broke out, he had to go to Berlin, where he studied as an engraver with Hermann Struck, who was also the teacher of Marc Chagall. He remained in Berlin until the war ended and after the demobilization, he went on to study engraving under Franz Ritter von Struck, who was Marc Chagall's teacher as well. Adrion returned to his hometown in France in 1919, and then eventually moved to Paris, where he took a studio in Montparnasse of Paris and allied himself primarily with the young Eastern European painters such as Chaïm Soutine, Pinchus Krémègne, and Michel Kikoïne to operate. In 1921, Adrion had his first solo exhibition at the Galerie Chéron and then in 1926, at the age of 37, he had his first major exhibition at the Salon des Indépendants, where later on, he exhibited regularly. In 1940, he exhibited at the Salon d'Automne and the following year at the Salon des Tuileries where he exhibited several landscapes. As an engraver, watercolorist and painter from the French school, he took a variety of external scenes as subjects for his work, showing a particular fondness for the picturesque aspects of the Parisian landscape, beach scenes,and horse races. Throughout his career, Adrion continued to exhibit his work at the Salons in Paris, where his paintings were praised for their ability to capture the movement and transience of urban life. He eventually left Paris to settle in Normandy, where he began focusing on beach landscapes subject, with great success because they became very popular as decorative paintings. 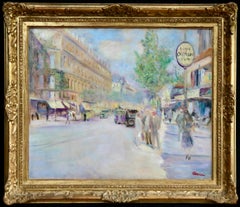 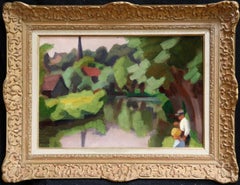 H 21 in. W 28.5 in.
Cayeux F / Mer
By Lucien Adrion
Located in New York, NY
This work by Lucien Adrion is a wonderful representation of his Impressionistic works. Using a bright palette of colors but executed in a very smooth way, almost as if they were past...
Category

H 30 in. W 37.5 in.
A French Impressionist beach scene possibly Cannes
By Lucien Adrion
Located in Southport, CT
Adrion left his native town of Strasbourg in 1907 and moved to Paris to work as a draftsman to the fashion industry. He travelled to London, Munich and Frankfurt. When he visited Ger...
Category

H 32 in. W 24 in.
La Plage
By Lucien Adrion
Located in Shrewsbury, Shropshire
Lucien Adrion was born in Strasbourg, France in 1889 and died in Cologne 1953. Post-Impressionist Lucien Adrion is considered an engraver, watercolorist and painter from the French s...
Category

H 23 in. W 28 in.
Monte Carlo
By Lucien Adrion
Located in Shrewsbury, Shropshire
Signed, Inscribed and dated 1929 verso Lucien Adrion was born in Strasbourg, France in 1889 and died in Cologne 1953. Post-Impressionist Lucien Adrion is considered an engraver, wat...
Category

H 16.50 in. W 21.50 in.
Cote D'Azur Beach Scene
By Lucien Adrion
Located in New York, NY
This work by Lucien Adrion is a wonderful representation of his impressionistic works at the beach of Cote D'Azur in France. Using a bright palette of colors, Adrion executes this pi...
Category